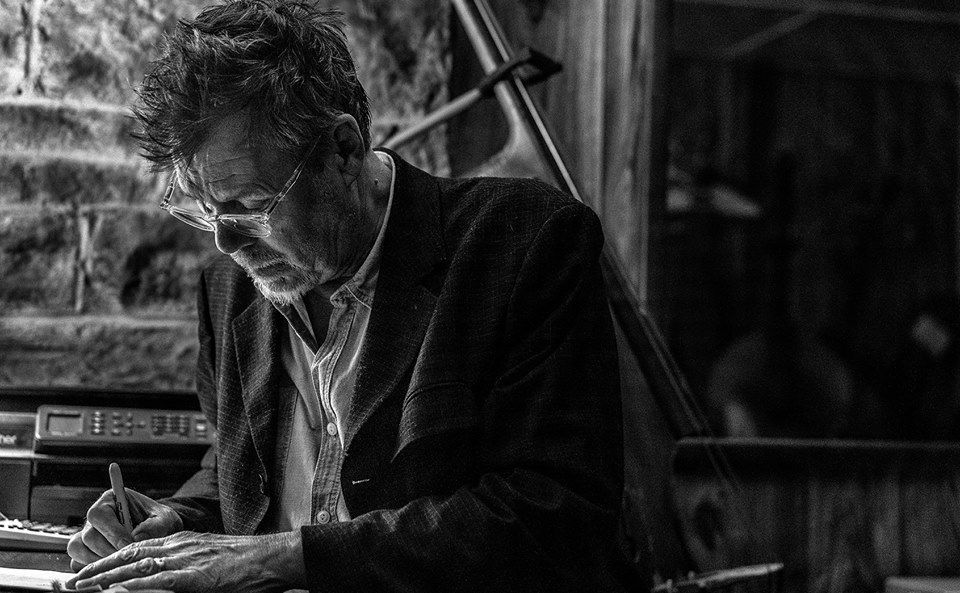 The album release show for R.B. Morris’ new release “Going Back to the Sky” will be held Friday, Jan. 10, at The Laurel Theater in Knoxville. 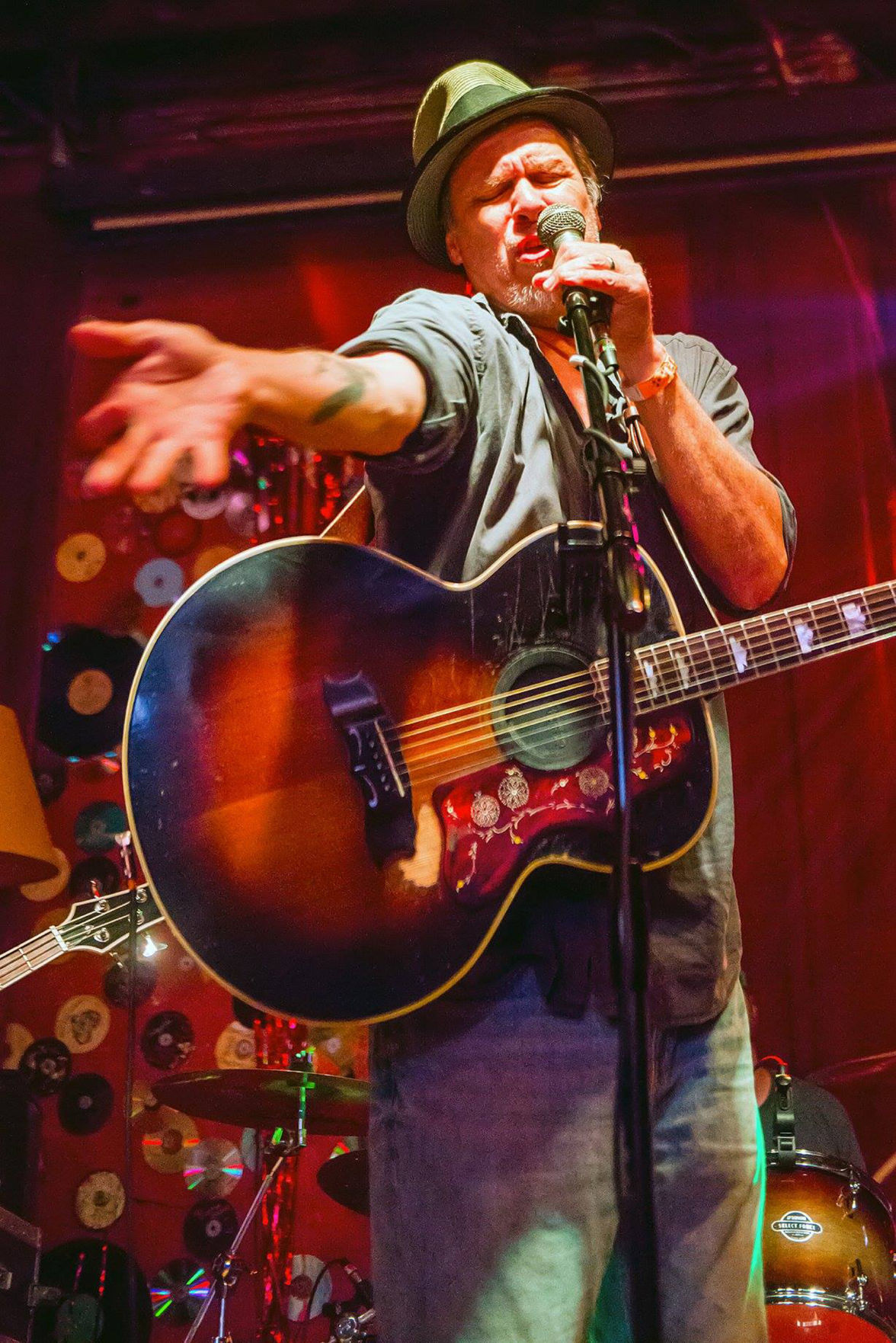 The album release show for R.B. Morris’ new release “Going Back to the Sky” will be held Friday, Jan. 10, at The Laurel Theater in Knoxville.

There for a few miles, R.B. Morris thought he might freeze to death on the side of U.S. Highway 93, somewhere in the northwestern corner of Montana.

Although the experience is more than four decades old, it’s brought to life on a languid, dark groove laid down by noted singer, songwriter and producer Bo Ramsey — a noted collaborator of Joan Baez, Greg Brown and Ani DiFranco, as well as a sideman for both Lucinda Williams and Elvis Costello — as one of the 14 songs that make up Morris’ new album, “Going Back to the Sky.”

A poet, playwright and performing artist, Morris puts all of his skill sets to work on his latest effort, which will be celebrated Friday night at a release show at The Laurel Theater in Knoxville’s Fort Sanders neighborhood. Morris refers to it as his “Dust Bowl record,” but he shrugs off any accolades with the graciousness of a man who has no other choice.

His paean to the West, he said, was made for the same reasons he took to the road all those years ago. Something inside him called and pulled and drew it out, and in the end, he did what he’s done since he was a young roustabout along Knoxville’s Cumberland Avenue “Strip” in the 1970s and ‘80s: He wrote a bunch of stories that shed a little light on a life well lived.

“I don’t know how it would plug into the culture nowadays, to tell you the truth,” Morris told The Daily Times recently. “I don’t know that this is something that connects to many people, but it’s a part of my life. I took lots of trips back then, just heading out, and it was a very romantic thing in those days, like you were Woody Guthrie, or Johnny Appleseed. I hadn’t even read Jack Kerouac back then — that all came a little later. It was just a hobo, drifting sort of thing back then, and it played out for a few years.”

He was a hungry man back then — for art, for knowledge, for adventure. His discovery of writer James Agee in high school led to a lifelong love of and fascination with the “Death in the Family” author — his one-man play, “The Man Who Lives Here Is Loony,” is an homage to Agee and has been performed in both New York and Paris. Morris was instrumental in the establishment of Knoxville’s James Agee Park, and his literary experience — he produced the independent zine Hard Knoxville Review in the 1980s and has since published numerous works of poetry — earned him the title of official Poet Laureate of Knoxville under former Mayor Madeline Rogero.

Musically, he’s part of a cast of characters who make Knoxville’s rock ‘n’ roll history a fascinating thing to study. Beyond Knoxville, he’s respected by some of the finest musicians in the business: Singer-songwriter Lucinda Williams once called him “the greatest unknown songwriter in the country,” and country-rock maverick Steve Earle is quoted as saying Morris “is the reason I started writing poetry.” And John Prine, a songwriter of note who rarely sings anything besides his own material, covered Morris’ “That’s How Every Empire Falls” for his “Fair and Square” album.

Despite his own brushes with musical fame, however, Morris insists those days are behind him.

“I don’t romanticize that a bit now as far as that goes,” he said. “‘The biz,’ as I call it, was a great experience, especially working with certain people. I loved it, and I still do it occasionally. But things change, and you adapt to all that sort of stuff. Karly (his wife) and I are both artists, and it’s tough at times, but we’re not in any beauty contests or trying to climb any ladders, but I do want to do good work. I want to plug it in, sell it, whatever — I just want to get it out there.”

The organic nature of “Going Back to the Sky” is a testament to the authenticity of the material. Morris never set out to write about his trips out West, but the experiences shaped his worldview and the adventures were memorable ones. Over time, he said, his muse kept dredging them up from the depths of his memory.

“This did percolate for a while, as far as the idea of making what I would call my ‘Dust Bowl record,’ which is what we would refer to it around the house,” he said. “If I would write a particular song that had a certain feel — a song like ‘Old Copper Penny’ (which appeared on his last studio record, the stripped-down “Rich Mountain Bound”) or ‘Once in a Blue Moon,’ which is like a cowboy’s lament, almost — we would say, ‘That one goes in the Dust Bowl.’ It sort of came together slowly.”

Back then, the West was even more desolate than it is now. “Progress,” if it can be called such, has hemmed in many of the wide open spaces, but there are still plenty of stretches of highway on the other side of the Mississippi that stretch into the distance. On “Going Back to the Sky,” Morris doesn’t just detail his adventures in that part of the country — he captures the grandeur, the majesty, the awe-inspiring scope of land and sky that must be experienced to truly be appreciated.

“I just wanted it to come through in the songs and the general production, but that scene is there,” he said. “Two of those songs — ‘Missouri River Hat Blowing Incident’ and ‘Montana Moon’ — came out of my first trip out there, stories from me and a buddy (Richard Pipkin, aka “Dustbo,” as he’s referred to in the songs) heading west. Other songs came from other trips: ‘Under the Cigar Trees’ came after I drove down to El Paso and went into Juarez with my mentor, George Stokely. His son had just gotten out of the Army, and he needed me to drive him, and we just had a grand time.

“It was a family thing, so there were a lot of emotions and all, but that song kind of came out of that trip. That’s where these stories come from, back about the early ’70s, when we didn’t have the interstate and sometimes had to take other roads. There were plenty of wide open spaces, and we were just a couple of kids, heading out for the high and wide to see what’s out there.”

Which brings him back to “Montana Moon,” the aforementioned tale of what might have been a near-death experience for Morris and ol’ Dustbo. With Morris’ long-time backing band joining Ramsey in weaving the rhythmic tapestry of tires slapping blacktop in the dead of night, the artist recounts the long drive from Harrogate, British Columbia, to Whitefish, Montana.

On the other side of the U.S. border,

civilization disappeared, the snow started to blow and the heater wasn’t working.

On top of that, they were running out of fuel. Freezing to death, Morris added, might have crossed his mind, especially as the clock reached the far side of midnight and Dustbo crawled in the backseat, wrapped in the pair’s only sleeping bag while the radio blew cold air and Morris kept time to the songs with chattering teeth.

The story unfolds throughout the song with a poet’s eye for detail and a storyteller’s sense of pacing, and it’s proof positive that despite his acclaim over the years for other albums and other works, Morris is still one of East Tennessee’s most talented songwriters.

The romanticized notion of getting lost in the West likely peaked during the 1950s, he acknowledges, but there’s still enough magic on those old roads and in his dusty journals to bring it to life for those who might want to live vicariously through his songs.

“I don’t know that this record connects with the culture in any particular way,” he added. “It’s just a throwback, it might seem — or for me, more like a wayback. The getaway part is not so prevalent as it once was with Kerouac (who wrote “On the Road”) and (Neal) Cassady and people moving across the country because of the romantic dream of the culture. And then in the ’60s, there was the ‘see the USA in your Chevrolet’ movement and all the traveling people would do. It was a physical thing, a reaching out, in those days that was part of growing up and part of American history.”

As a younger man, he took full advantage of that mythos. The opening and closing songs on “Going Back to the Sky,” in fact, were both written on the side of the road, while he was thumbing his way across the country. “Red Sky,” he said, was written somewhere west of Needles, California, as he thumbed his way through the San Joaquin Valley.

“I was trying to get back to East Tennessee, and I wrote that song by the side of the road,” he said. “Putting it together with ‘Walking Song’ (the final track) was just an esoteric thing, to bookend the record with those moments that are way out there. I always had that (desire) to get a glimpse of America. Coming from East Tennessee, I just wanted to go west and see cowboy movies. I guess this album’s a little bit like a Western movie, in that sense.”