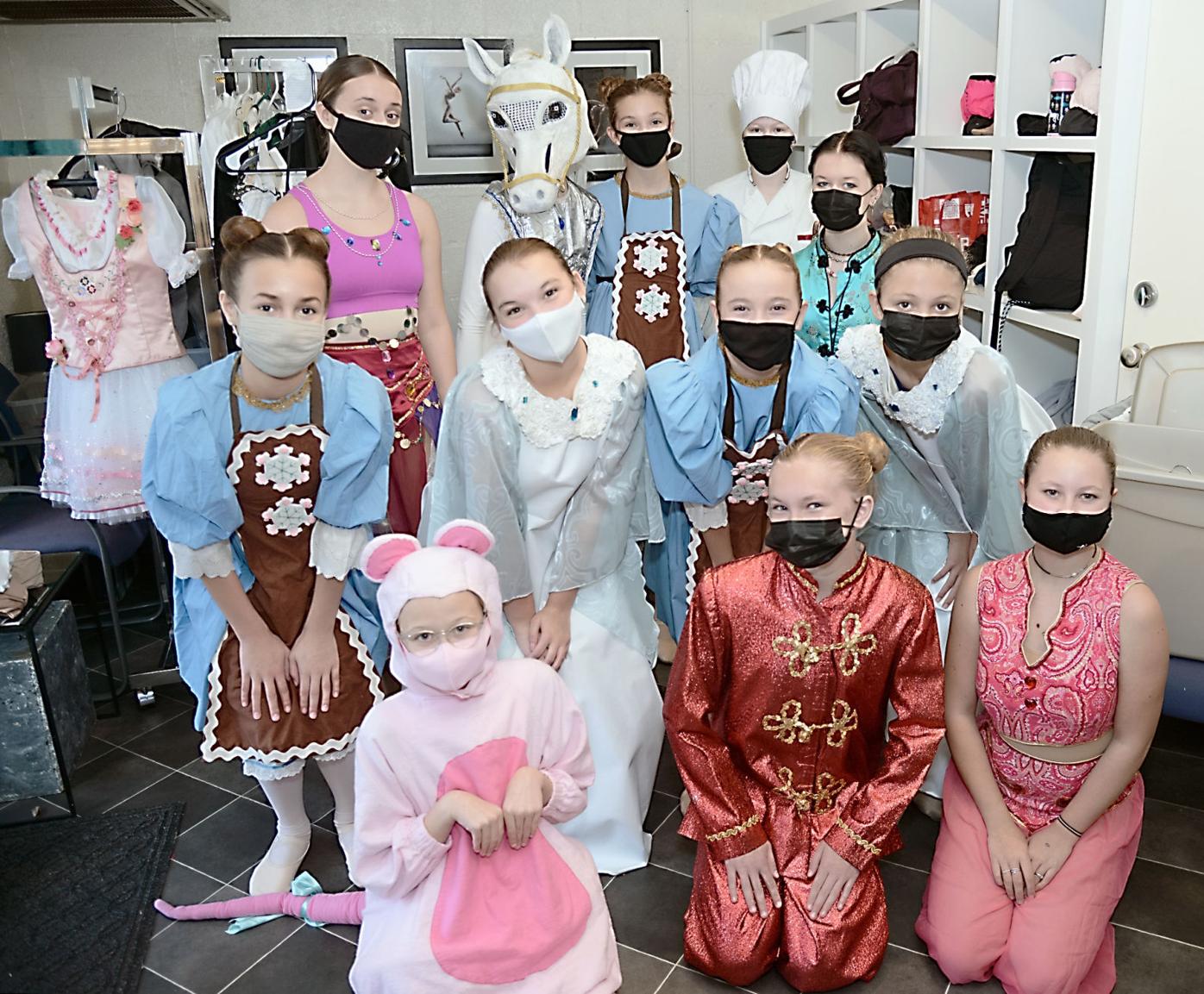 Cast members of the Appalachian Ballet Company gather for rehearsal for its upcoming performance of the “Nutcracker.” 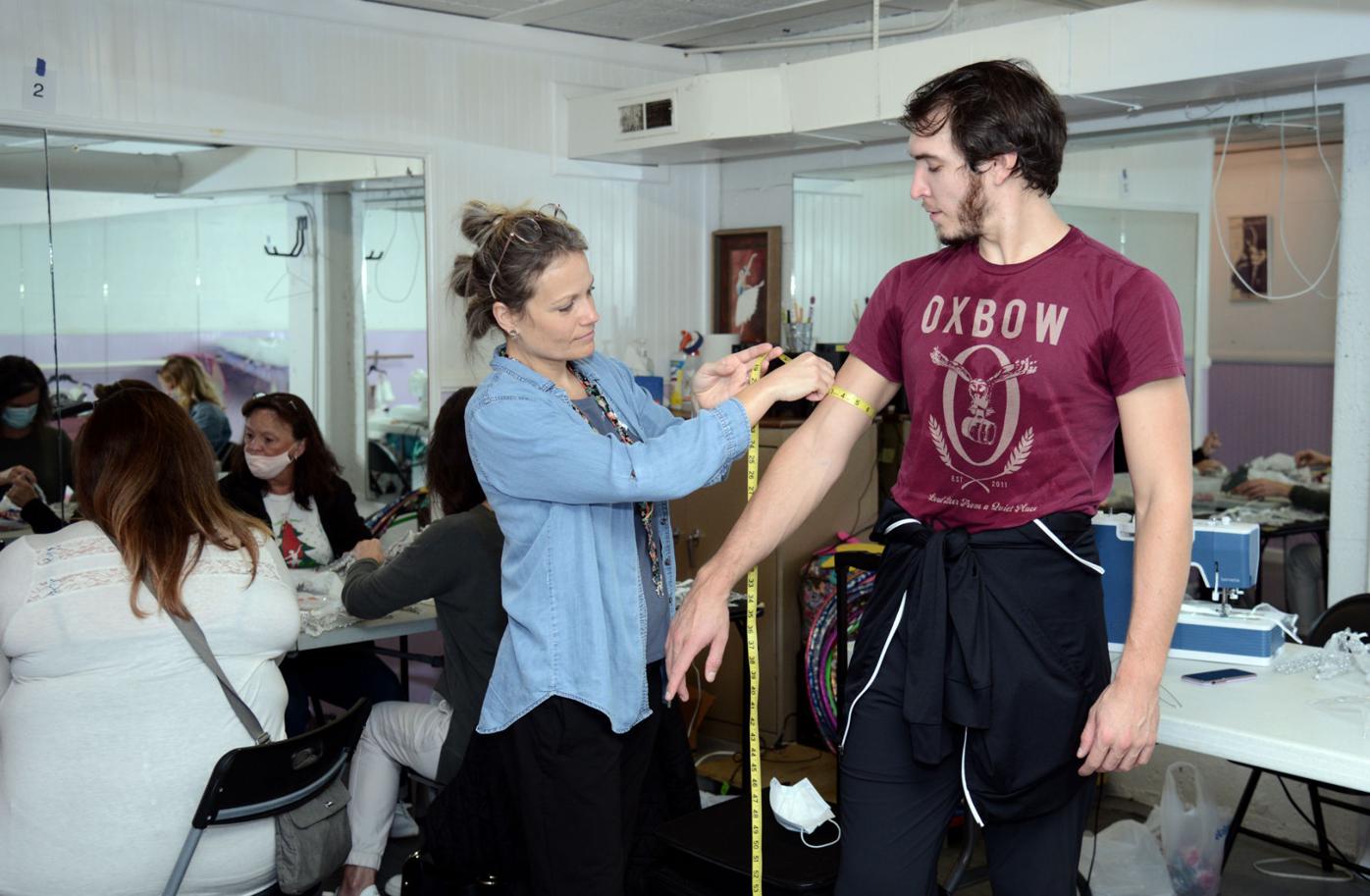 Daniel Wagner, the Prince, gets measured for his costume by seamstress Jessica Rutgerson in preparation for the Appalachian Ballet Company’s annual performances of the “The Nutcracker.”

Cast members of the Appalachian Ballet Company gather for rehearsal for its upcoming performance of the “Nutcracker.”

Daniel Wagner, the Prince, gets measured for his costume by seamstress Jessica Rutgerson in preparation for the Appalachian Ballet Company’s annual performances of the “The Nutcracker.”

It was supposed to have been a 50th anniversary celebration like no other, a lavish spectacle of dance and holiday merriment performed in Knoxville and Maryville alike ... but COVID-19 killed it.

The annual holiday presentation of “The Nutcracker,” by Blount County’s own Appalachian Ballet Company, was designed to be the centerpiece of the troupe’s season. Bookended by the annual “Blue Jeans and Ballet” in the fall and an early spring dance, the 2020-2021 dance calendar stood to be an opulent showcase to mark its 50th year, but COVID-19 derailed those plans.

While company director Amy Vaughn and her team of teachers and volunteers did their best to salvage some of the joy of that tradition, without the bright lights, the live symphony, the grand stages and a live audience, it just wasn’t the same, some of those organizers told The Daily Times recently.

“It was awful,” said Morgan Hodson, an eighth grade English teacher at Alcoa Middle School who serves as one of the company’s costume mistresses and dances in Act I party scene of the holiday ballet.

“I danced for the company when I was younger, and even though I tried out and never got a part in ‘Nutcracker’ then, I finally made it at age 40!” Hodson added. “I love being a part of it, but mainly what we do is when Amy gives us a cast list, we’re responsible for coming up with all the parts and pieces that go into each costume.

“Some are just one piece, but some have six pieces that the girls need to wear. We make new costumes each year, but we also use some that have been around for quite a while. Some costumes on that stage are as almost as old as I am.”

Hodson got involved with the company as a volunteer four years ago when her daughter, Darcy, followed in her pointe shoes. It was a sort of homecoming, even though the work can be grueling: 20 to 30 hours a week leading up to the performances, all worth it in the end, Hodson added, when the Christmas season comes to life in the story of an enchanted nutcracker and the wonders a young girl experiences, all set to the music of Tchaikovsky.

Without it as a seasonal anchor last year, she said, it felt like something was missing.

“You’re with the dancers so much that they feel like family, so it felt like I didn’t get to be with my family last year for Christmas,” she said.

“We tried to do some things to make it really feel like the holidays were here, but it just didn’t feel the same,” added Sara Ferguson, co-chair of the company’s parents guild and one of the volunteer coordinators for “Nutcracker.” “We did the (Maryville-Alcoa Jaycees) Christmas parade, and we tried to kind of do little activities here and there, but really without that community and preparing props and costumes and bringing the lighting and the snow to the stage, it really didn’t have that same joy and excitement and anticipation of the coming holiday season that it would normally have.”

In some ways, Ferguson added, that makes preparation for this year’s performances — which take place Dec. 4 and 5 at the Knoxville Civic Auditorium, and Dec. 10 and 11 at the Clayton Center for the Arts on the Maryville College campus — even more meaningful. As much as the pageantry and splendor of “The Nutcracker” are holiday traditions for patrons, the behind-the-scenes customs by the dancers and organizers are integral to their own holiday cheer.

“The younger dancers have big sisters in the company who take them on and take them under their wings, and they exchange gifts and spoil them during the show — it’s just a really amazing process,” said Yvette Herzbrun, the company’s bookkeeper who also dances the role of Mrs. Stahlbaum, Clara’s mother, in the production. “When you’re rehearsing and preparing with these people for so much time, you do become a family, and it becomes a part of your whole Christmas tradition. I would say that the rest of your Christmas traditions don’t begin until after ‘Nutcracker.’”

Although the COVID pause postponed the company’s 50th anniversary celebration to the current season, Appalachian Ballet did perform “Nutcracker” — in March, for a commemorative film of the troupe’s centerpiece ballet. Putting it together on the cusp of spring just wasn’t the same, however.

“It felt very surreal and very weird doing it in March, and of course, we couldn’t film everybody at one time,” Hodson said. “All of the dancers were rehearsing in masks, and it just looked different and felt different.”

The filming, however, allowed Vaughn and her team to give extra attention to the props and sets. Hodson and her seamstress partner took apart and washed 28 white costumes to ensure they were vibrant for the cameras, and the Nutcracker itself was given a fresh paint job for the first time in 20 years, Vaughn added.

“Those are things you may not notice or see if you’re in the audience, but with a camera, we know you would see all of those things, so there was a lot of maintenance for the filming,” Vaughn said. “Coming into the rehearsal process for this season, it’s like, ‘Wow, everything looks good!’ That was the advantage, since we didn’t have a spring show — we were able to spiff up ‘Nutcracker,’ so things are going to sparkle for our 50th anniversary performances.”

There are other changes that will be noticeable to astute audience members who make attendance at one of the company’s “Nutcracker” performances part of their annual holiday festivities. Vaughn and her husband, Jack, drove all the way to Charleston, South Carolina, to procure a new sleigh, for example; the Snow Corps, she said, is the largest its been in 50 years, with 30 dancers — eight more than in years past.

And, she added, the program for this year’s “Nutcracker” is a 50th anniversary keepsake, with a timeline, pages from previous years’ programs, old photographs and more.

“Looking back at the program for the first year I was in ‘The Nutcracker’ — 1974 — it’s like we all had three or four parts, because there just weren’t very many of us,” Vaughn said. “In the beginning, we had probably 18 to 20 dancers, and now we have over 80 dancers in the company. It’s just really nice to see how far we’ve come.”

With such longevity, it’s safe to say that Appalachian Ballet Company is an East Tennessee — and, specifically, a Blount County — institution. And a tradition like “The Nutcracker” is too integral, and too powerful, to be stopped permanently, even by COVID. This Christmas season, Ferguson added, feels even more special to to the company’s members — and that’s something that will translate into magic on stage.

“You can just tell the difference in their eyes as the girls are dancing and preparing for this year,” she said. “it’s been a totally different experience going from not having live shows to being able to do things in person again. And with this year being the 50th anniversary, it’s brought an even bigger level of excitement.

“We’re just very thankful and very much looking forward to being back on the stage, and we’re all very excited to watch the dancers perform. It feels like we’re getting our community back.”