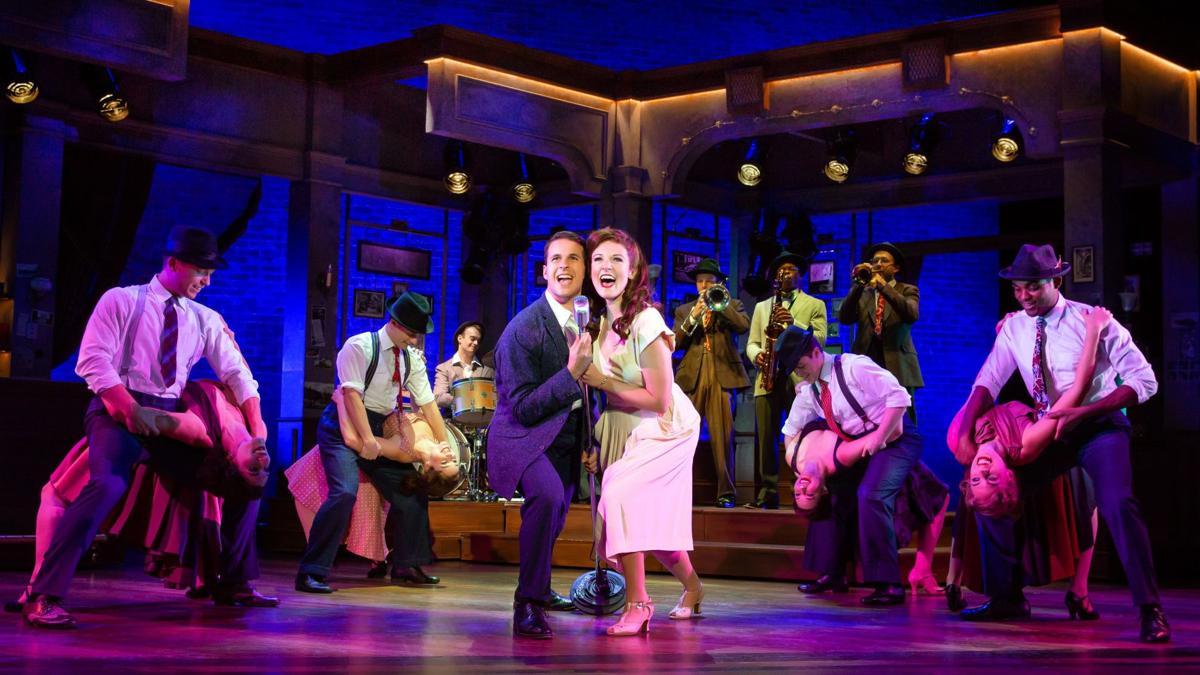 The cast of “Bandstand” will bring back the swinging sounds of post-World War II America next week at the Clayton Center for the Arts. 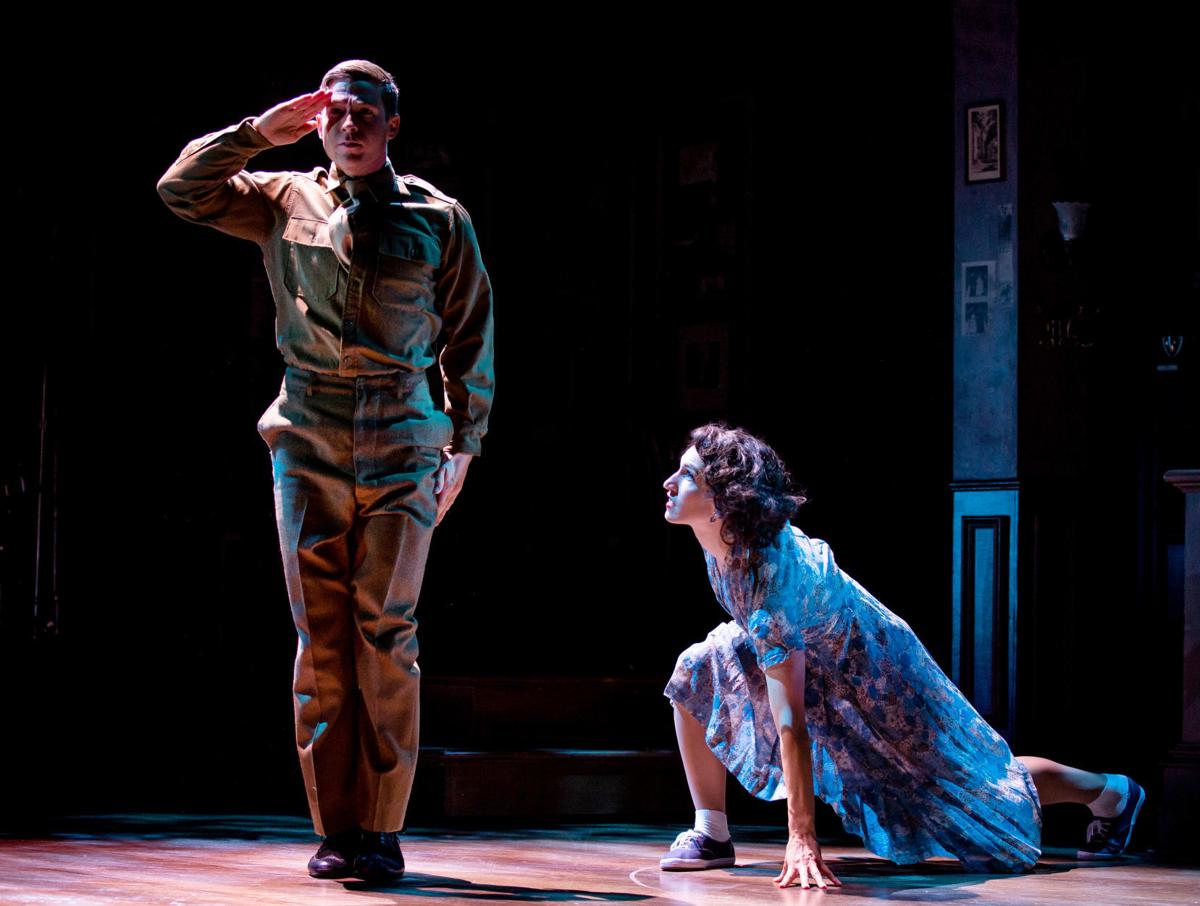 The original Broadway production of “Bandstand” opened in April 2017 and closed in September of that year, earning director/choreographer Andy Blankenbuehler a Tony Award and two Drama Desk Awards.

The cast of “Bandstand” will bring back the swinging sounds of post-World War II America next week at the Clayton Center for the Arts.

The original Broadway production of “Bandstand” opened in April 2017 and closed in September of that year, earning director/choreographer Andy Blankenbuehler a Tony Award and two Drama Desk Awards.

It was, in many ways, the last righteous conflict involving United States armed forces, and yet Jonmichael Tarleton didn’t give World War II much thought until he was cast in the musical “Bandstand,” which comes to the Clayton Center for the Arts in Maryville on Thursday, Jan. 30.

Some of that, of course, is because of his youth. He was 6 years old on Sept. 11, 2001, and so he’s grown up with the wars in Iraq and Afghanistan as a backdrop to social and political conversations. Those conflicts are tinged with a rhetoric that’s often divided over support for the cause. Tarleton, who plays the role of drummer Johnny Simpson in the musical, is grateful that “Bandstand” eschews any sort of political commentary on war, choosing instead to portray the humanity of those who served.

And that, he told The Daily Times recently, is the sort of gratitude that ties the conflicts of his generation to those of the Greatest.

“What really drives me, I think especially nowadays, is that a veteran of any war agrees to make the ultimate sacrifice,” Tarleton said. “They agree to protect the country. They love regardless of political views, and I think it’s extremely important to understand that being grateful to those men and women does not mean you are pro-war. Support for veterans is super, super important, and I think a lot of people hold these men and women in such high esteem.”

Set in 1945 after veterans of World War II have returned home, “Bandstand” — directed and choreographed by Andy Blankenbuehler, a three-time Tony Award winner who choreographed the smash Broadway musical “Hamilton” — tells the story of a group of servicemen haunted by the specters of the battlefield as they try to make lives for themselves in post-war America. Led by singer-songwriter Donny Novitski, they form a musical group for a television competition, discovering camaraderie in a shared goal and shared experiences.

For Tarleton, 26, the role of Johnny — the group’s drummer — allowed him to put to use talents he cultivated as a teenager, when he first started playing music at 13.

“Drumming has been something I’ve always done, but I considered it a hobby — playing in rock bands, punk bands, one or two jazz combos,” he said. “It was something fun to do on the side, but being able to bring a part of myself that I don’t always get to do on stage, I think I’m able to be absolutely genuine and really, really connect with the character of Johnny. This is a guy who was injured in the war, who suffered a broken back that required three surgeries, who’s addicted to painkillers, who has a severe brain injury that causes memory loss.

“My character doesn’t always feel comfortable because of that, and he’s always trying to figure out and catch up with everybody. But when he’s at the drumset, he can communicate fully. It’s the only part of Johnny that wasn’t touched by the war, and it’s just something that makes him feel like everything’s going to be OK. He has a lot of skill at it, and drumming is something I love to do personally, as well. It really connects me to the character.”

Tarleton graduated from Gordon College in Massachusetts with a classical voice degree, considered a career in opera and ultimately moved to New York to try his hand at acting. His first professional gig was as Andy Hobart in Neil Simon’s “Star Spangled Girl,” and the bulk of his career was spent in small regional shows and workshops before he discovered the casting call for actors for “Bandstand.”

“One of the roles listed said they needed drumming experience, and even though I knew nothing about the show, I thought, ‘Why don’t I submit my resume, a sample of my drumming and a singing reel,” he said. “I got an appointment, and then I got a call back, and that’s when I started researching the show and figuring out that it was a role I very much wanted to do.”

In preparation, he began to ask questions of his family members to uncover his own connections to World War II. He discovered an uncle who served in the Royal Australian Air Force, and an uncle who served on a destroyer in the South Pacific. More than that, the story spoke to him on an empathetic level, and when he learned that “Bandstand” was endorsed by the nonprofit organization Got Your 6 — a group of veterans that advocates for more realistic portrayals of vets in television and film and selected “Bandstand” as its first certified stage drama — he was even more passionate about landing the role.

It all comes down to reading about the story and having this overwhelming feeling that it’s very honest and very true to veterans,” he said. “It’s always interesting to take on roles that involve military personnel or stories about war, but I had never come across a musical that had this much honesty and this much content that involved veterans after a war was over and was so true to the issues they were suffering from. When I found out Got Your 6 had put its stamp on it, I knew this was something I had to work on, because it seemed a really truthful and powerful piece.”

After four additional call backs, including one in-studio performance for the show’s music supervisor, he landed the part. From there, he spent six hours a week practicing the drums and learning the show’s charts, and another six hours doing character work as Johnny. The music, the choreography and the acting all were meticulously rehearsed, he said, and showrunners took pains to make “Bandstand,” even though it’s set in 1945, relevant to audiences of 2020.

“I got into drummers like Buddy Rich, Gene Krupa, the Benny Goodman ensemble and the Louis Armstrong ensemble,” he said. “Today, people think this is music you listen to to be happy or in the background, but after doing research into the show, I came to see that swing dance was like metal back in the day. All of these people were in nightclubs, drinking, dancing, doing backflips and all this crazy stuff. It moved people the way going to a Beyonce concert moves people today, and listening to it from that perspective makes me realize how bombastic and enthusiastic the music is.”

And with that music as the backdrop, “Bandstand” strikes the perfect balance between the traumatic background of the men it showcases and the lust for life they discover through music. Yes, Tarleton said, there are somber moments in the show, but there’s plenty of levity as well, and those are just as important — because both, he pointed out, are necessary to bring to life the essential humanity of “Bandstand.”

“Veterans of wars are just people who went through this incredible, almost unimaginable, thing, who came back, and they’re just trying to live their lives,” he said. “This show is trying to breathe humanity back into these men. Of course we revere what they did for this country, but they’re also just guys — they make jokes, they go out drinking, and they just want to play music. A lot of times, they’re not talking about the serious issues, but when they do come up, we get a little bit more into the broken side of these men and what they’re trying to find through this music.”