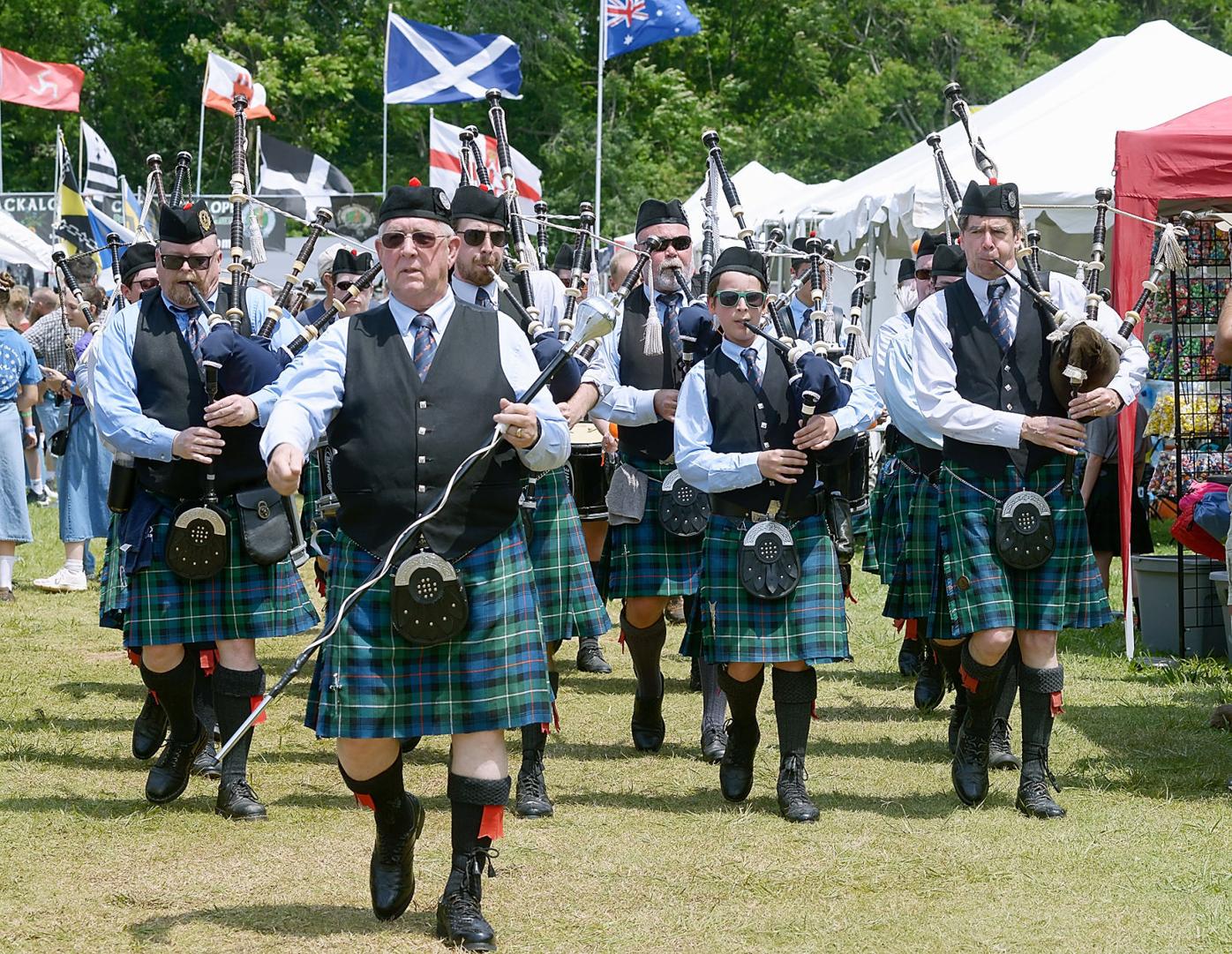 Knoxville Pipes and Drums parade through the grounds of the Smoky Mountain Scottish Festival and Games on the Maryville College campus on May 19, 2019. 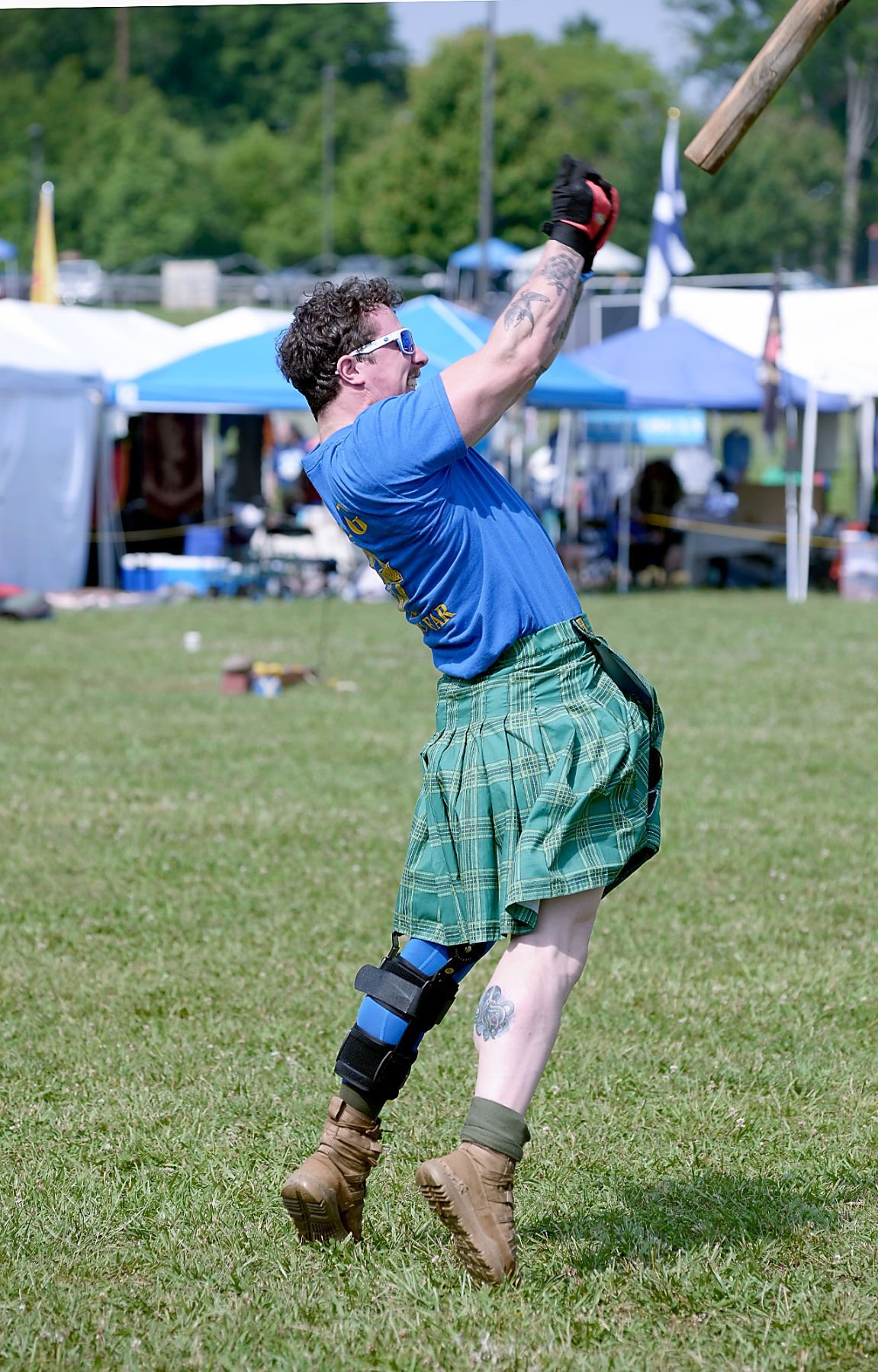 Knoxville Pipes and Drums parade through the grounds of the Smoky Mountain Scottish Festival and Games on the Maryville College campus on May 19, 2019.

The good news, when it comes to the 2021 Smoky Mountain Scottish Festival and Games, is that most of last year’s preparation carried over to this year.

When COVID-19 led to the cancellation of the 2020 event, prep work was mostly complete, Keith Austin — the vice president of the festival board — told The Daily Times last week. Contracts were signed, and most of them were simply paused for 12 months, so that when the decision was made to move forward this year, the vendors, clans, athletes and musicians already had Saturday and Sunday set aside.

The bad news, Austin added, is that the decision to pay tribute to the Scots-Irish roots that are so intertwined with the fabric of East Tennessee culture came about a couple of months ago, give or take, and was made with a certain amount of trepidation.

“We went into it with an air of caution,” Austin said. “There was a lot of pressure to do it, but we were watching every relevant factor we possibly could to determine whether or not we move forward. So even though there was pressure to do so, it was not, ‘We have to do this no matter what,’ but, ‘We want to do it in the right way.’ And I think a lot of factors led to that, especially the institution of vaccines and the number of cases coming down, especially here on a local level.

“We looked around and saw other festivals were scheduled and started happening in this area — the Townsend (Spring) Festival, for example — and so we decided to move forward. We expect people to behave responsibly, and right now, masks and social distancing are required. We want to make sure we’re as responsible as we possibly can be in an outdoor festival.”

It’s difficult to say how COVID-19 or the sudden concerns about fuel will affect attendance at this year’s event. In 2011, when the festival first moved to the Maryville College campus from Gatlinburg, roughly 6,000 people attended; by 2019, organizers hoped to top 10,000 guests, and that growth was one reason organizers opted to switch locations. Previously known as the Gatlinburg Scottish Festival and Games, traffic congestion and the growth of Sevier County led to a change of names and hosts, and for the first three years, the weekend was known as the Smoky Mountain Highland Games at Maryville College.

Given the college’s ties to Scotland, from the institution’s mascots to a number of revered traditions, it made for a natural partnership, and while the athletic competition is a highlight — the caber toss alone, the over-the-head heave of a block of wood roughly the size of a telephone pole, is a feat worth the price of admission itself — it’s not the only thing to do at the festival, Austin pointed out.

“Our music headliner, Albannach, couldn’t get out of Scotland because of COVID restrictions, but we were able to replace them with another band, and we’ve got Seven Nations as the headliner this year,” he said. “I think the entertainment is going to look very, very similar to how it’s been in years’ past, and the same number of clans — 49 — will be there. We’ve got the same number of merchandise vendors, and we’re full up with athletes. About the only place there’s going to be a little bit of a difference, and maybe not even a discernible one, is that we’ve only got six pipe and drum bands compared to nine or 10.”

One of those, however, is coming from Texas and includes roughly 30 members — a good sign that the festival is developing a reputation every bit as Scottish as the Grandfather Mountain Highland Games in North Carolina, the Stone Mountain Highland Games in Georgia and the Greenville Scottish Games in South Carolina, three regional events that were benchmarks for the East Tennessee festival when it was first established.

The allure of a Scottish festival in the Southeast, especially in East Tennessee, is easily understood, given the close ties between the Scottish highlands and the Appalachian foothills. Rough-and-tumble mountain people from Scotland, many of whom labored under oppressive kings for centuries while scraping a living out of the land, made for ideal settlers in East Tennessee.

“On a macro scale, the British Isles, and particularly Scotland, has had such an impact on the world,” Austin said. “I think entertainment like ‘Outlander’ and ‘Braveheart’ have caused people to have a piqued interest in things that are Scots-Irish, but for the settlers who came here, this looked like home: the mountains, the rivers, the lush scenery and the unpredictable weather, so that’s why they settled here. It was a hard life for a long time, just like Scotland, but they survived.”

That indomitable spirit is celebrated at the games, both in the displays of strength and fortitude on the athletic field and in the celebrations found on stage. It’s a family affair, and children can compete in their own lighthearted series of athletic challenges, with beanbags in place of 20-pound sheaves and fence posts in place of cabers. Adults can sample Scotch whiskey and other beverages. The entire family can take in the sheepdog demonstrations, tour the vendors of various weapons and clothing and dine on traditional Scottish dishes such as haggis. Pipes and drums will ring out across the intramural fields at Maryville College, Celtic rock will stir the dust beneath the entertainment tent, gentle ballads and warrior anthems will serenade those who attend Saturday night’s “Ceilidh Under the Stars.”

“My a-ha moment, and the one I love to see happen when visitors realize they have some Scottish background, happened during the first year, when I was walking through the clan tents,” Austin said. “I knew the Scots-Irish had settled Eastern Tennessee and Western North Carolina, and these Scottish clans put out who their septs were, which are families who went to the larger clans for protection. One clan there was Keith, and the first sept under that clan was Austin.

“Keith Austin — my parents had no clue, but I recently got new kilts, and I’ll be walking around wearing the Austin-Keith tartan. That was my moment to really identify, and when you start researching the culture you start to understand how that tiny island, over the millennia, has had an incredible effect on culture — whether it be drama or sports or architecture or music or what we eat and drink. And that’s what people understand when they come to the festival: People will sometimes ask, ‘Why would I go? I don’t know that I like haggis, I don’t own a kilt, and my last name doesn’t start with an Mc.

“I tell them, just come and have a funnel cake and a hot dog and take your kids to get their faces painted, and while you’re there, take a look at the sports and the wild outfits and listen to the music, and see if this doesn’t do something to your heart,” he added. “If you have any roots in this area, you’re going to hear something that speaks to you.”

And after a year of quarantines and social distancing and the lack of public gatherings, this year’s Smoky Mountain Scottish Festival may not be the biggest, but it could certainly be the most beloved. After having to forego last year’s event, Austin looks forward to arriving early on Saturday as the fog lifts off the Maryville College intramural field and hearing the distant sound of bagpipes, and this year, more than ever, that sound will lift a lot of other spirits besides just his own, he said.

“The majority of people are very grateful we’re having something, that the college and the board decided to move forward and have this festival,” he said. “Certainly, there are people who think this is probably a bit early given where we are right now, and we still have to be responsible and be cautious. I think people’s habits have changed on their own, and this region is very blessed that we’ve had some significantly positive progress in fighting the pandemic.

“So we still have to be careful, but I think it’s going to be a great time to be getting together and celebrating. And it feels good that this is one of the first celebrations we’ll see with people who are enjoying themselves at a great festival.”

HOW MUCH: Two-day pass — $35; Saturday only — $20; half-day Saturday (after 3 p.m., includes entry to the "Ceilidh Under the Stars" evening concert that begins at 7 p.m.) — $15; Sunday only — $15. Children younger than 16 admitted free both days. First responders, seniors, veterans and students receive discounted admission with ID.

The band Seven Nations is no stranger to the entertainment stage at Maryville College's Smoky Mountain Scottish Festival, but after a year off because of COVID-19, the music will be even more meaningful this weekend.