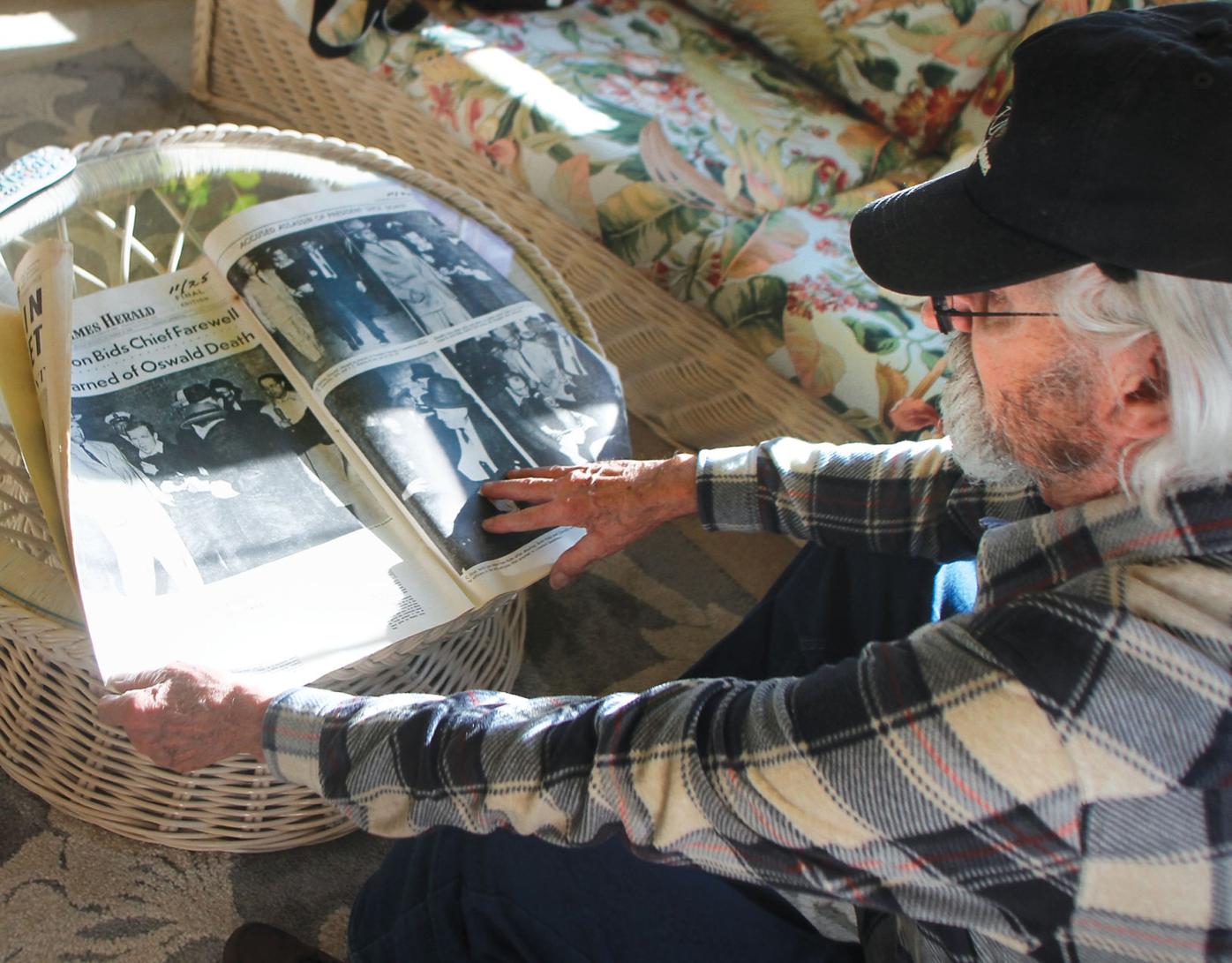 Allen Hochstien shows off his copy of “The Assassination Story” a collection newspaper articles covering the aftermath of John F. Kennedy’s Nov. 22 assassination in 1963. Hochstien was in Dallas, Texas, on that day, about a mile away from the event. 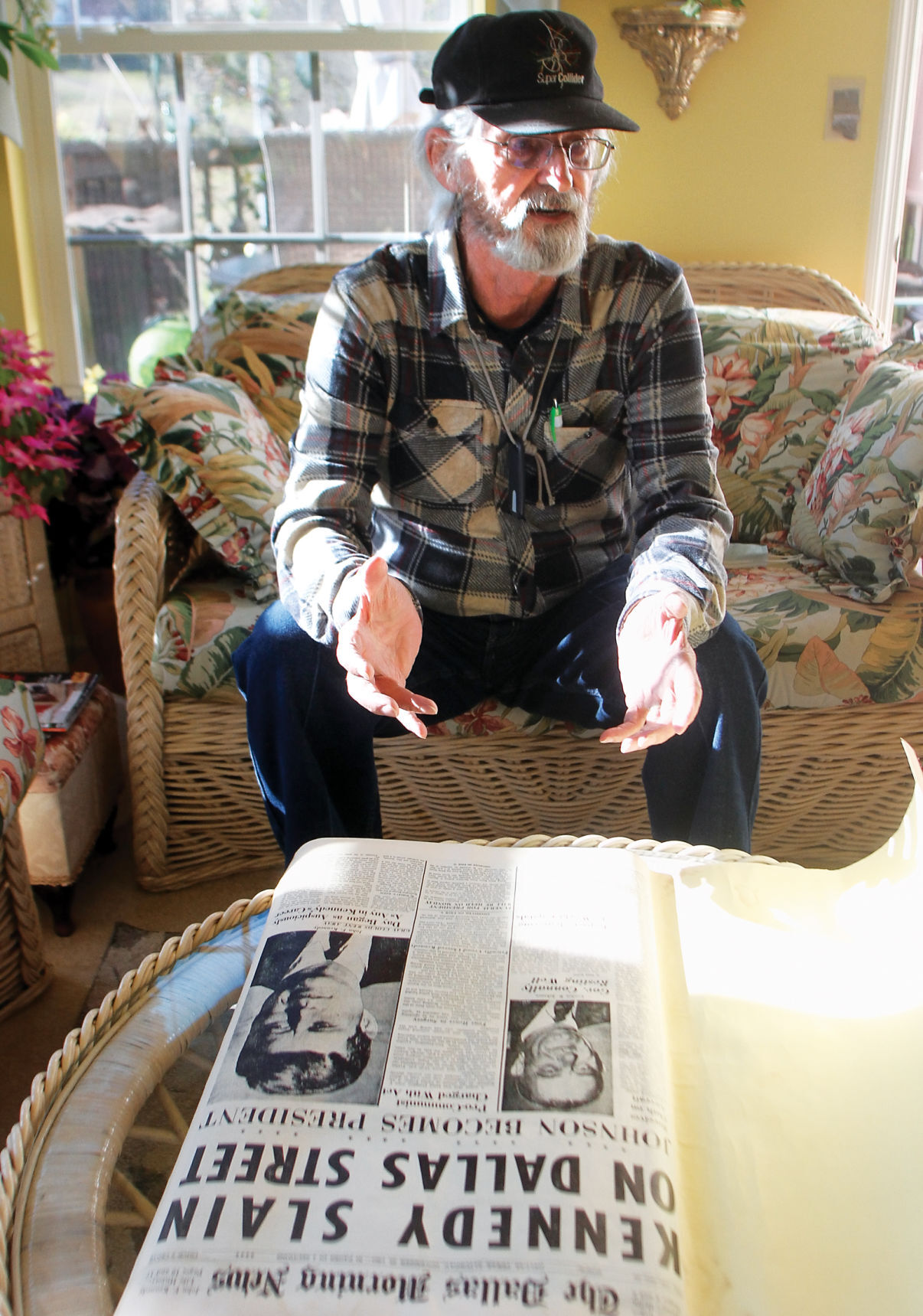 Allen Hochstien shows off his copy of “The Assassination Story” a collection newspaper articles covering the aftermath of John F. Kennedy’s Nov. 22 assassination in 1963. Hochstien was in Dallas, Texas, on that day, about a mile away from the event.

Allen Hochstein was about a mile away from one of the most important events in U.S. history.

On Nov. 22, 1963, around 12:30 p.m., President John F. Kennedy was shot as his motorcade passed the Texas School Book Depository at Dealey Plaza in Dallas, Texas.

Less than 30 minutes later at Parkland Memorial Hospital, a Catholic priest gave the 35th president his last rites and his personal physician pronounced him dead.

The news shook the world and Hochstein was no exception.

A Nebraska native and Maryville resident since 1994 — he and his wife Allene still live in the same Royal Oaks home they moved into then — Hochstein was in his mid-20s in 1963, living in Dallas and working for the a division of the federal government he didn’t want to name in a recent interview.

“The best way I can describe the atmosphere in Dallas that morning and the day before is ‘pugnacious,’” he told The Daily Times. His agency sent him to the Lone Star State’s biggest city to monitor a large electronics firm. When he heard the news, he was in the middle of environmental testing.

“Then our secretary came in and said ‘The president’s just been assassinated.’” Hochstein said. “The whole company, everybody, just stopped. Everything was shut down and everybody left. It was a catastrophe and everybody was speechless. I felt like everybody else: We just couldn’t believe it. It was terrible and of course, we didn’t know the details.”

For the rest of the afternoon and into the evening, the city was very quiet, he remembered. No sirens. No crowds. Just silence.

Like so many Americans that day, Hochstein said he returned to his apartment and turned on the TV, watching as the brutal details of the event unfolded. “That night all we knew was that the president’s body had been taken to Washington D.C. and Lyndon B. Johnson was sworn in,” he remembered. But in the following days, the situation infamously intensified. “Events went on and on. Each day something new was happening.”

Hochstein recalled the shock and disbelief on Nov. 22 and the confusion after suspected assassin Lee Harvey Oswald’s murder on Nov. 24. “That was almost as earth-shattering as the assassination itself,” he said.

If the atmosphere before Kennedy’s Dallas visit was tense, the atmosphere days and even months afterward was charged with fear. “We all felt something was really taken from us. JFK was very popular. Everybody loved him. And when this happened, everyone was taken aback. I felt sad, but the question was, ‘Who would do something like that?’ Then, everybody got to thinking ‘What’s going on here?’”

He remembers rumbles of war after Kennedy’s death: Russia and Cuba were frequently on people’s lips. “It was a precarious time when people were concerned about atomic bombs dropping on your house. It was a terrible time and when this happened, that didn’t help anything.”

Details slowly unfolded throughout the coming months and years and Hochstein explained he was one of many wondering what really happened that day and who was really involved.

He said he has his own doubts about the traditional narrative.

That day’s events anchored themselves in Hochstein’s mind, but he wanted a written reminder of what took place that day.

So, come January, he bought something he’s kept close for nearly 50 years: a compendium of articles from two Dallas daily newspapers chronicling the the chaos following the assassination.

One of only 3,000 printed, according to a seller’s description WorthPoint.com, the document is titled “The Assassination Story” and comprises breaking news articles and in-depth print analyses from the Daily Times Herald and the Dallas Morning News on events surrounding JFK’s death between Nov. 22 and Dec. 11.

Hochstein has read the account from front to back more at least once, he said. It still brings back the memory of that day when he was so near the events that turned the nation upside down.

The fear haunting the American conscious 57 years ago is not unlike the atmosphere of 2020, Hochstein reflected.

“The assassination and the fear that everybody had with Russia, the Bay of Pigs and having missiles flying in your back yard, that concerned people,” he said. “It was short-lived, thank God. Better minds got together and stopped a crisis. That was with us for so long, people were concerned, but people learned to live with it.”

With COVID-19, it’s somewhat similar, he said: People know there’s a crisis, but they’re also just trying to live their lives like normal. “There are things happening,” Hochstein reflected. “People are dying. They’re dying of this virus.”

Recalling the years of fear and immense uncertainty during and immediately after JFK’s presidency, Hochstein — who served in the U.S. Air Force and then with the federal government for a combined 37 years — had advice to people struggling through 2020’s many unknowns.

“If you’ve got control over it, then do something about it,” he said, noting he and his wife are trying to stay at home as much as possible during the pandemic.

“If you don’t, then be aware of it, but don’t worry about it. Give that to God and let him handle it.”

JKF? WTH? 😂 It’s old news now, but this guy seems a bit nut jobby...if he mentions the unnamed department from 57 years ago, will the black helicopters come to get him?