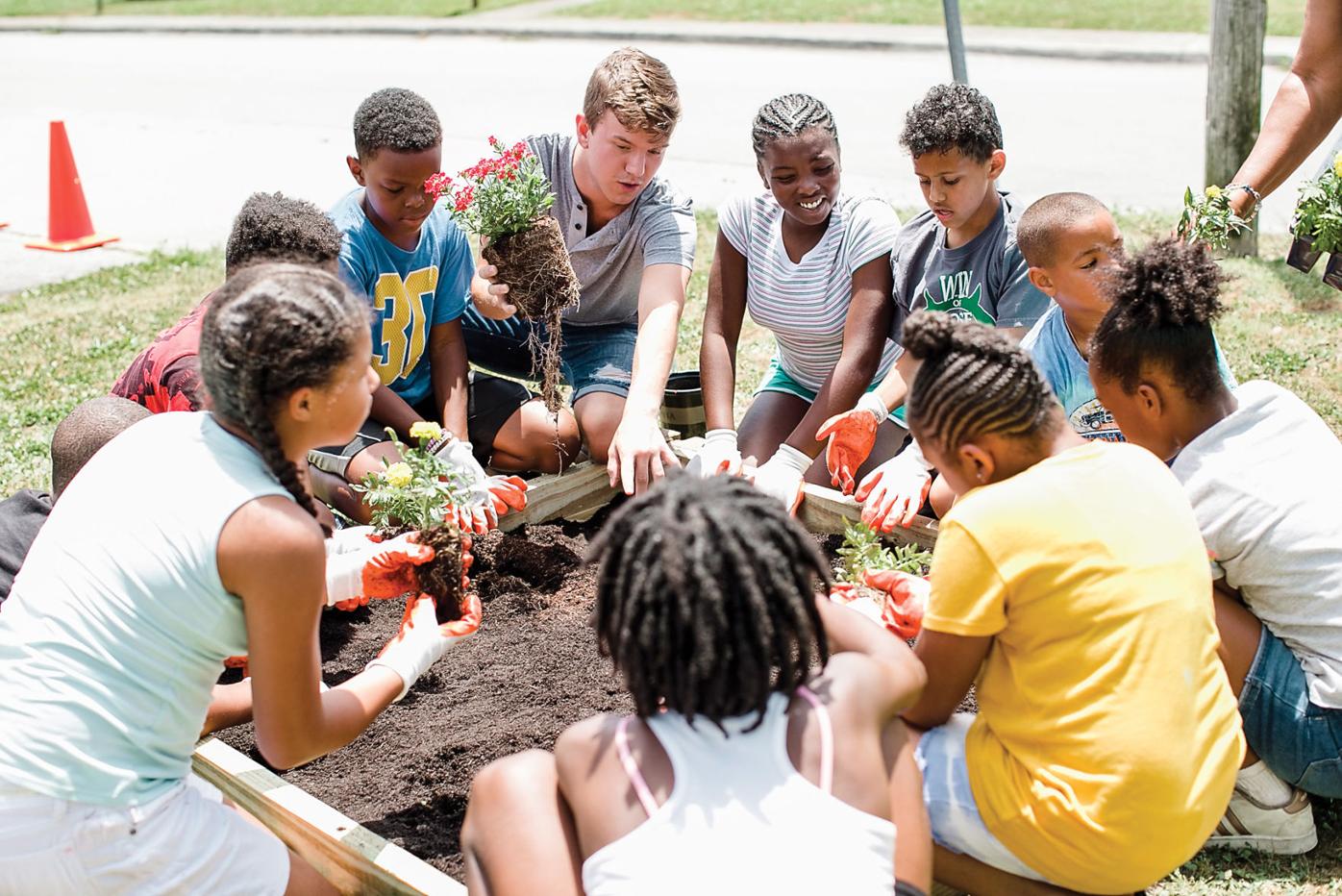 Shine Day 2020 Volunteers work with students served by the Martin Luther King Jr. Community Center on June 10. That event kicked off fundraising for a new playground at the center. Community members raised about $15,000 for the project, which is now moving forward as an official Maryville-Alcoa-Blount County Parks and Recreation project. 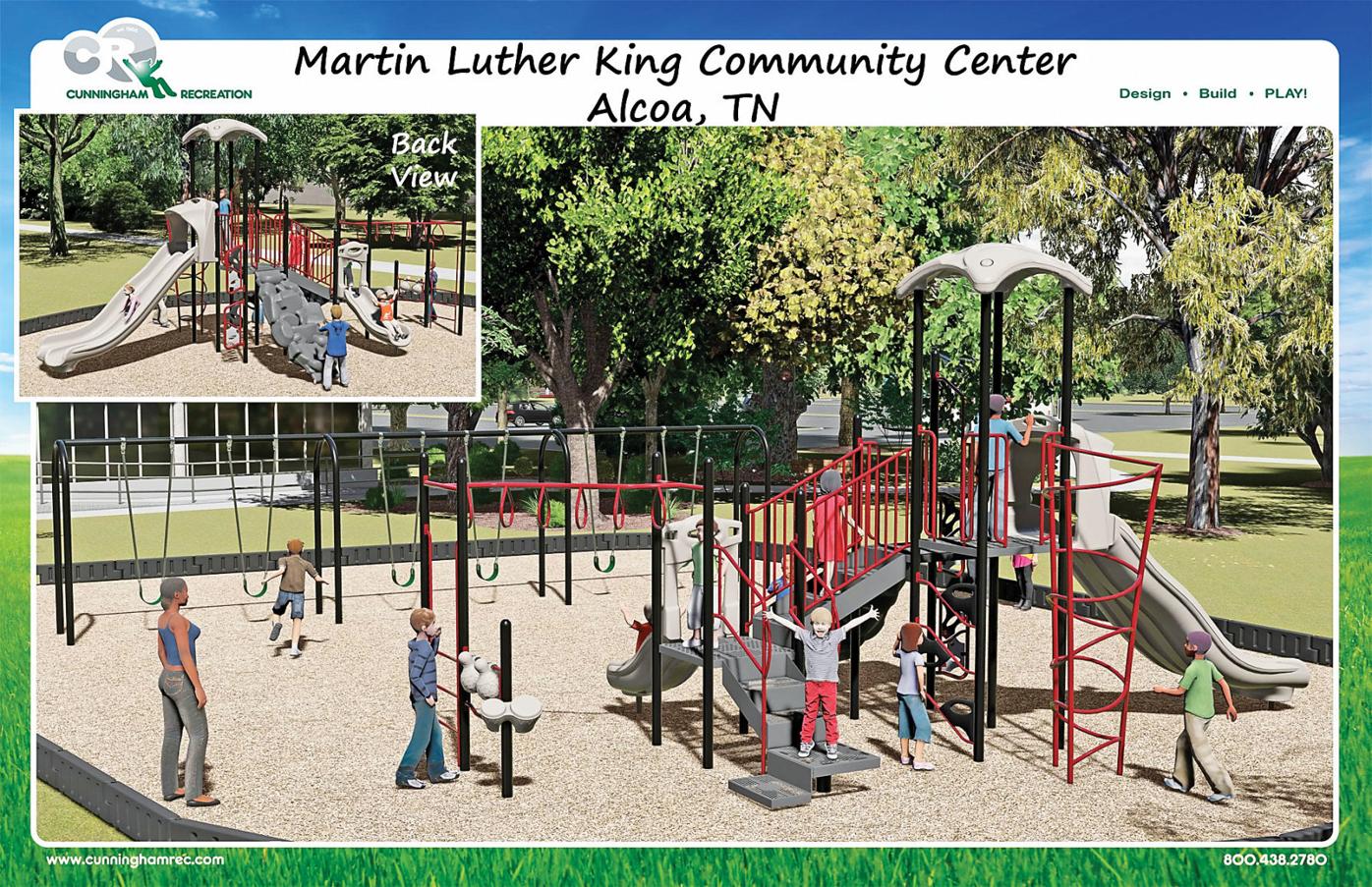 Shine Day 2020 Volunteers work with students served by the Martin Luther King Jr. Community Center on June 10. That event kicked off fundraising for a new playground at the center. Community members raised about $15,000 for the project, which is now moving forward as an official Maryville-Alcoa-Blount County Parks and Recreation project.

A partnership between community members, a fledgling ministry and Maryville-Alcoa-Blount County Parks and Recreation is bringing a new playground to Alcoa’s Hall Community.

An online fundraiser that was part of the inaugural Shine Day — the commemorative service project created by Alcoa Intermediate School teacher Miranda Talley — raised $15,000 in June. Now that money will be turned into a new playground for the Martin Luther King Jr. Community Center.

What started as a way to celebrate the memory of Talley’s late son, Clark Reagan, has had a series of ripple effects throughout the Blount community.

One of those effects was a GoFundMe page started by Jamie and Erik Swanson and Talley’s brother, Micah Talley.

Monday, he said donations exceeded expectations: Originally they had set a goal for only $10,000, but people’s generosity quickly blew past that amount.

Micah Talley explained that choosing to help the MLK Center was partly born out of his sister’s love for the kids she works with.

“We just saw a need,” he said. “There was a conversation we had been having for a while about how the MLK Center was really underserved. We just wanted to try and help them out in any capacity.”

In past interviews with The Daily Times, center Director Lili Brown explained the need for expansion is great, especially since staff pre-pandemic would serve an estimated 70 students a day in its after-school program.

On June 10, the day of the Shine Day project, Brown said people “from everywhere” donated sports equipment and money. “I don’t know where all these people came from,” she said. “But I am so thankful.”

Monday she emphasized her gratitude to everyone who donated money to the playground project. “There’s so many people that you can’t just send individual thank you cards out,” she said. “I would still be writing them.”

Brown has advocated for upgrading and expanding the center since she started in 2017. In 2018 and 2019, she helped write a BlueCross BlueShield of Tennessee grant proposal for a playground. Given that the current playground is about 25 years old, Parks and Rec Director Joe Huff said the need is undeniable.

“If you had a checklist of why you need to replace a playground, I guess it would hit 95% of those items,” Huff said Monday.

The grant proposals fell through for the MLK Center twice, but the fundraiser and capital funds from Parks and Rec mean Brown won’t have to write another one in 2020.

“We’ve always talked about needing to replace that playground,” Huff said. “We’ve been talking about expansion of the center, but I don’t think that’s going to happen in the near future.”

But when the Shine Day funding came through, addressing the MLK’s needs became a top priority.

The Parks and Rec Commission gave a thumbs-up to the project during its Aug. 7 meeting after staff got quotes on playground costs, settling on a Cunningham Recreation estimate of $37,593.

Leaders decided to dig into the Alcoa capital fund and put $23,000 toward the project, Huff said. “The most you can take out of (the capital improvement fund) is $25,000,” he added, noting that wouldn’t cut it to build a playground. But the donations pushed them over the threshold.

Parks and Rec’s operating budget is struggling right now: Huff said July alone it came out $100,000 down from the same month in 2019.

But since that doesn’t affect the money they have set aside for capital projects, the playground still has a greenlight.

Huff said this may be the first in a line of playgrounds the organization wants to update.

“I’m so grateful that people even care enough to even help out,” Brown said. “You know the kids, I worry about some of them who don’t really have anywhere to go.”

During COVID-19, she said the MLK Center’s daily group of after-school students has been reduced by half because of schools’ current staggered schedules.

Micah Talley said the project represents more than just facility repairs. It’s a symbol of unity for more than one reason.

“It really shows how, in a time that people are so divided, we really can work together,” he said. “We can get along and take care of each other and make a place that’s good for everyone to live in.”

Huff said the playground could begin construction within four to six weeks.