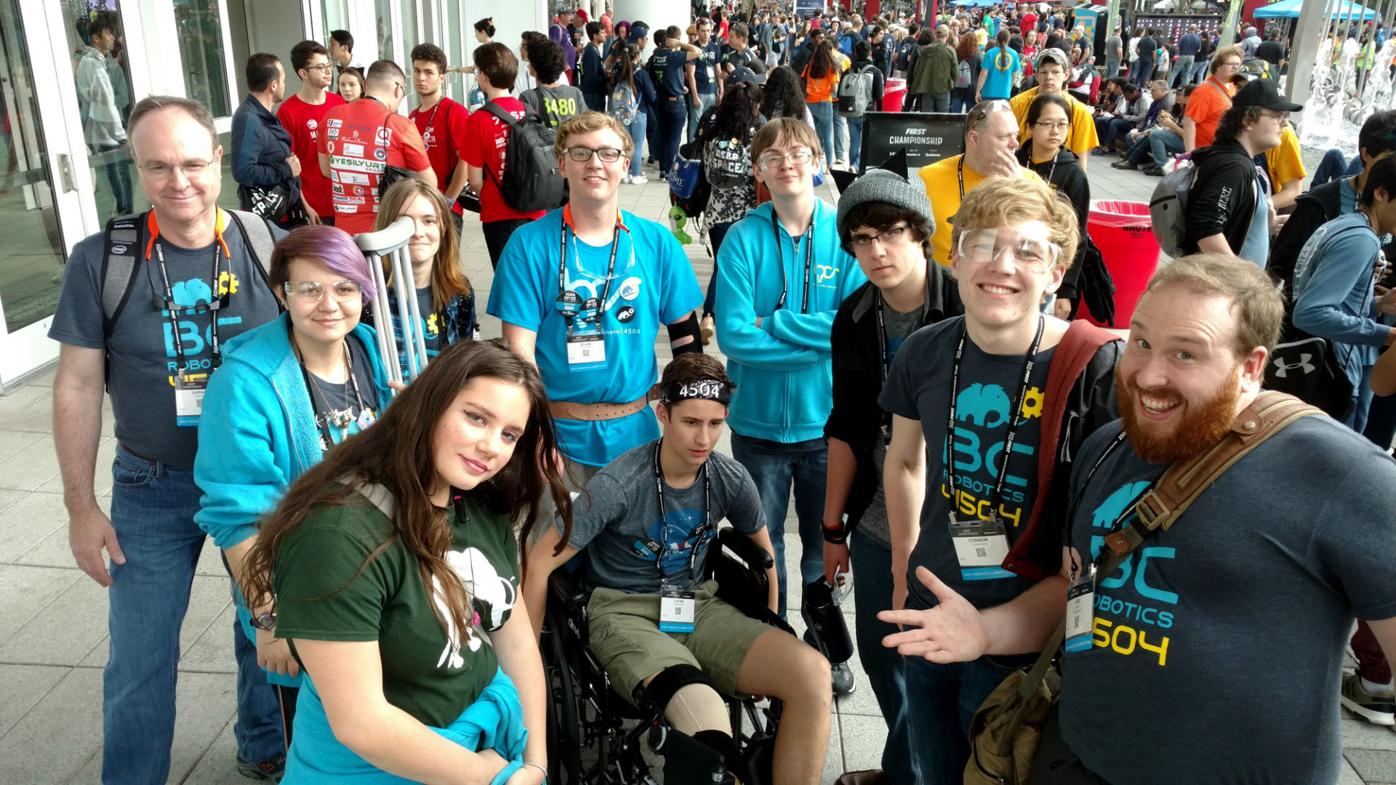 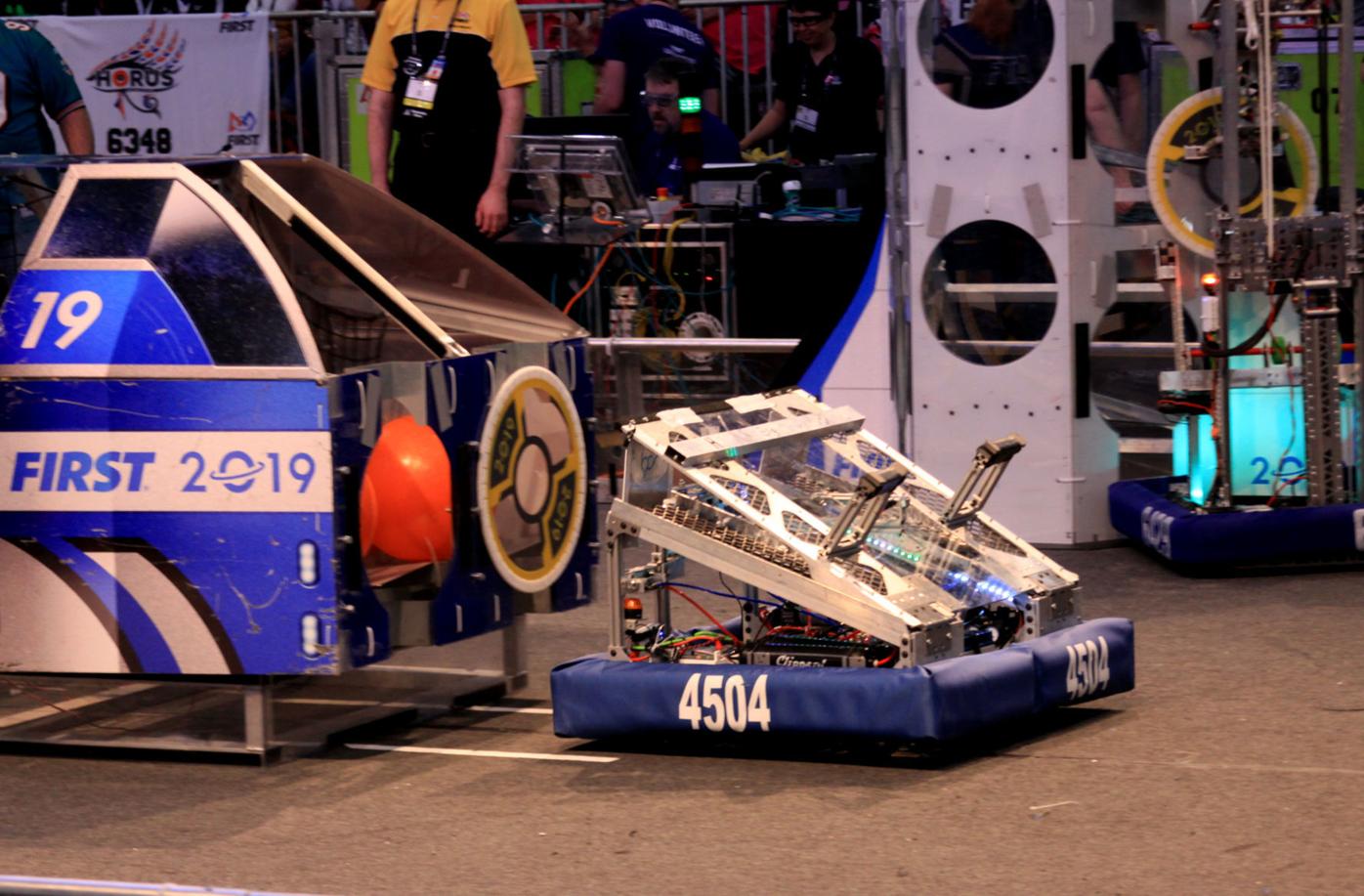 A robot built by B.C. Robotics Team #4504 finishes placing a round panel during a competition. The wedge-shaped robot later deployed a ramp, which allowed another team's bot to climb up it to an elevated platform to score points during the FIRST Robotics competition.

A robot built by B.C. Robotics Team #4504 finishes placing a round panel during a competition. The wedge-shaped robot later deployed a ramp, which allowed another team's bot to climb up it to an elevated platform to score points during the FIRST Robotics competition.

In six weeks they built a robot, within 15 weeks they were competing at a world championship and along the way the students formed friendships they say are as close as family.

This was the team’s first time at the FIRST Robotics world championship since its rookie year, 2013, when this April it traveled to Houston to compete with 15,000 students from 40 countries. With its alliances, B.C. Robotics won half its matches and kept the winning team from a perfect record.

The team draws students from across the county, with more than two dozen participants this year from Maryville, Alcoa and William Blount high schools.

FIRST (For Inspiration and Recognition of Science and Technology) released this year’s challenge, Destination: Deep Space, the first Saturday in January, and teams had six weeks to build a bot that met the rules and could score points in a game that relies on alliances with other teams.

It was six weeks of blood, sweat and tears, the students say, and “praying to Murphy that something doesn’t go horribly wrong,” added Jonathan McCaig, who joined the team for the first time as a senior at MHS this past year.

During that time, students usually are in the workshop in the former Fort Craig school from 5-8 p.m. every weekday except Wednesdays, and Saturdays from 10 a.m. to 6 p.m., with some nights longer.

Key to FIRST is “gracious professionalism,” respecting other competitors and helping so that everyone competes at their best level. The competitive spirit is high, but so are the levels of cooperation among teams.

For example, Farragut’s team allowed Blount County and other teams to practice on a full-sized game field that it built.

B.C. Robotics chose to design a wedge-shaped bot that not only had arms capable of quickly placing panels but also could allow other bots to score points. “We made our robot literally a ramp, to where somebody else could drive on top of our robot to get to the elevated platform,” Barker explained.

The team members describe the ramp deploying — with sound effects — and the reaction of the thousands of spectators watching another robot ride up and score the points.

“It was glorious,” said Dylan Bryant, who just graduated from William Blount and plans to study mechanical engineering at the University of Tennessee.

“In years past we had made something so complex that when it worked it was great, but having to repair or fix or modify between every match — and you’re talking about 10-plus matches at every tournament — you’ve got very little time to strategize and talk with the other teams about how are we going to attack this alliance,” explained Shawn Kerr, who teaches STEM (science, technology, engineering and math) classes at Alcoa High School and serves as one of the team mentors.

During the first competition of the year, the Palmetto Regional at the end of February in Myrtle Beach, South Carolina, the team still was coalescing.

Bluntly speaking, after five intense matches they were at each others’ throats, they admit. Take the pressure of standing for hours of intense competition and add the noise of the pits and the crowds, and it adds up to an intense situation.

“This is a very mental sport,” Bryant said. “We’re not out there running around doing physical drills, but we’re out there challenging our minds.”

Students credit Joel Smith, an MHS teacher, with bringing in practices to calm the team. After every match they would take one minute to breathe, not speaking or looking at anyone else. Then they could reflect on what just happened and what to do next, explained robot driver Lucas Belknap, who after graduating from William Blount is headed to UT to study aerospace engineering.

Belknap not only brought electronics experience to the team, but also the hand-eye coordination, spatial awareness and quick thinking of someone experienced with radio-controlled airplanes and cars.

B.C. Robotics finished 18th out of 64 that weekend.

For the Smoky Mountain Regional they changed the ramps, a design that took the robot they dubbed “Wedgie” up to the maximum at 124.8 pounds.

“We didn’t expect to make much of a splash outside of our regionals,” Bryant said, but in Houston the Blount Count team discovered others already knew about 4504 and its capabilities.

“We had a reputation at Houston worlds as the defensive bot,” McCaig said.

Between placing panels and deploying the ramp in the final seconds, their bot prevented other teams on opposing alliances from scoring.

The FIRST Robotics experience gives students more than they can receive in a classroom or at their own schools.

For the STEM experience alone, Kerr explained, it gives students more freedom of design and access to professional mentors.

It also offers a range of experience, with opportunities for not only engineering, programming and fabrication but also graphic design and marketing. Not all team members have to work on the robot, but all have a hand in its success.

“Little Alcoa, we just don’t have all of those programs,” Kerr said.

Barker, who started with FIRST in eight grade, said there were no in-depth programming classes at Maryville. On the team he had the opportunity to write custom code that allowed robots to operate autonomously. Teams also can work with a variety of programming languages, from Basic to Python.

Teammates describe Maguire Headrick, a rising Maryville senior, as a homegrown engineer with the spirit of a picker — someone who knows how to bring technology such as an old tube radio back to life. So it’s not surprising that he finds a STEM class with kit projects limiting.

Speaking of his first year with B.C. Robotics, Maguire talked excitedly about the range of things he learned, from the proper way to use a file to how pneumatics create motion without a drive train. Working on his own projects, he said, he often wishes now that he had teammates to tap for ideas.

The concept of gracious professionalism and the work experience have been invaluable, said McCaig, who’s planning to choose a major after some time at Tennessee Technological University. “It’s been more informative and more stimulating than any STEM class that I’ve taken thus far. It’s really allowed me to open up and express myself and test myself, to see what works, what doesn’t and what’s worth it on a team.”

They learn to recognize when their idea may not be the best and how to explore options and allow the best ones to sprout, the students said.

While schools offer a lot of teams and clubs, none is like the FIRST experience, Barker said.

Added Kerr: “As an educator, I get to see them taking ownership of this like nothing in a classroom.”

B.C. Robotics competes against other regional schools that have more students, greater funding and even class time to work on the robots. Competition is expensive, with about $4,000 to build the robot and that much or more for each competition, and while going to Houston was a great experience, it drained the budget.

But Kerr notes that since the students come from all local school districts, the team has the support of foundations and local businesses that recognize the workplace skills the students are learning.

Although the next challenge won’t be released until January, B.C. Robotics isn’t taking a break. Organizing the workshop is an ongoing project, and Barker, who is taking a gap year, plans to mentor a couple of team members on programming.

The students also plan to take their robot to some unofficial competitions and schools to draw in new members, as well as produce recruitment videos.

Bryant recalls the first time he walked into the workshop. “One of my fears was, being the shy person that I am, coming into a room full of strangers. But I’ve known these people since January, and they are basically family at this point.”

While Bryant said he had been taking things apart and putting them back together for as long as he can remember, the team members note that no experience is necessary.

A ninth grader who arrived never having touched a drill later was machining parts, Belknap said.

“It’s an absolute blast,” he said.