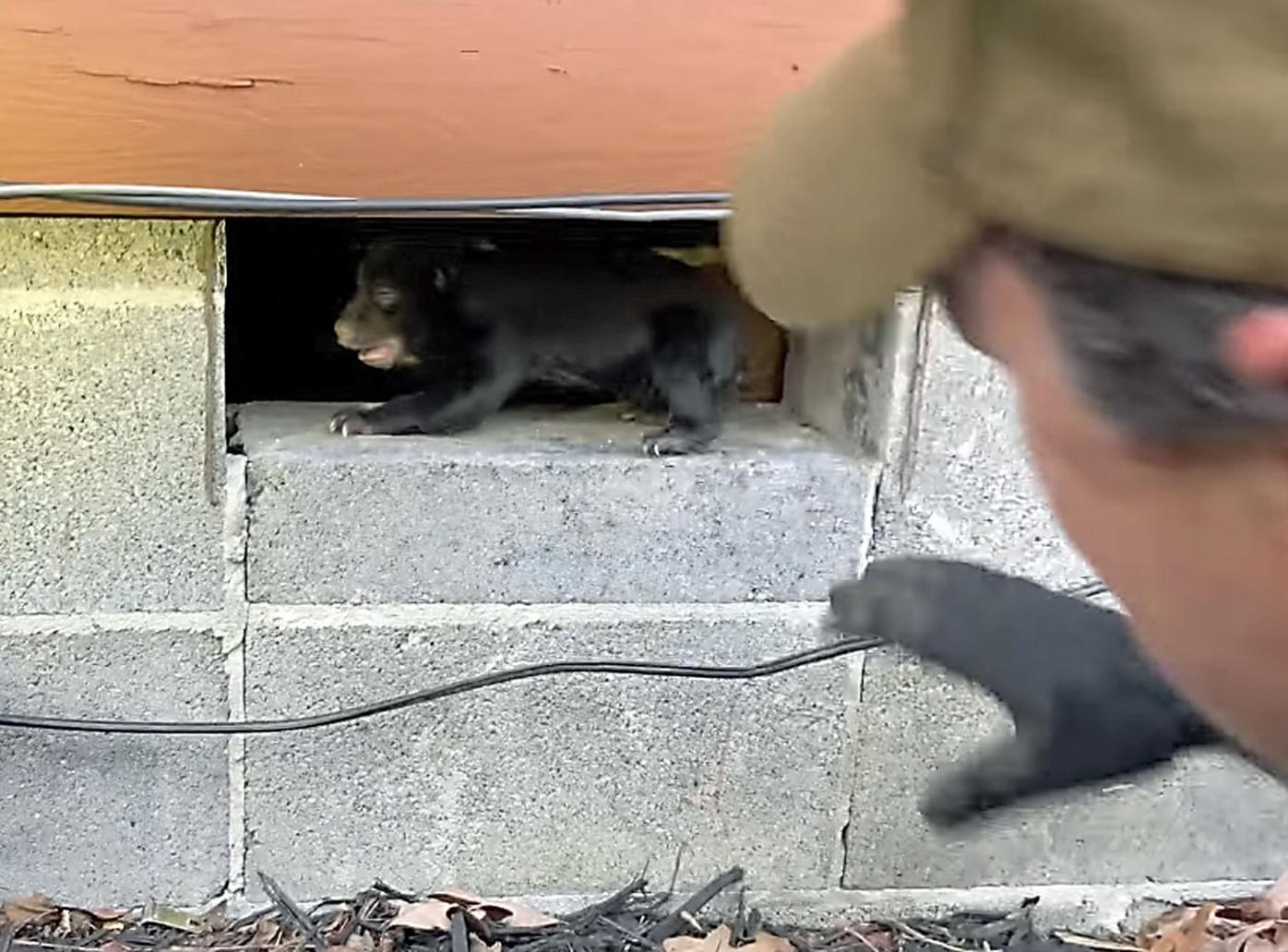 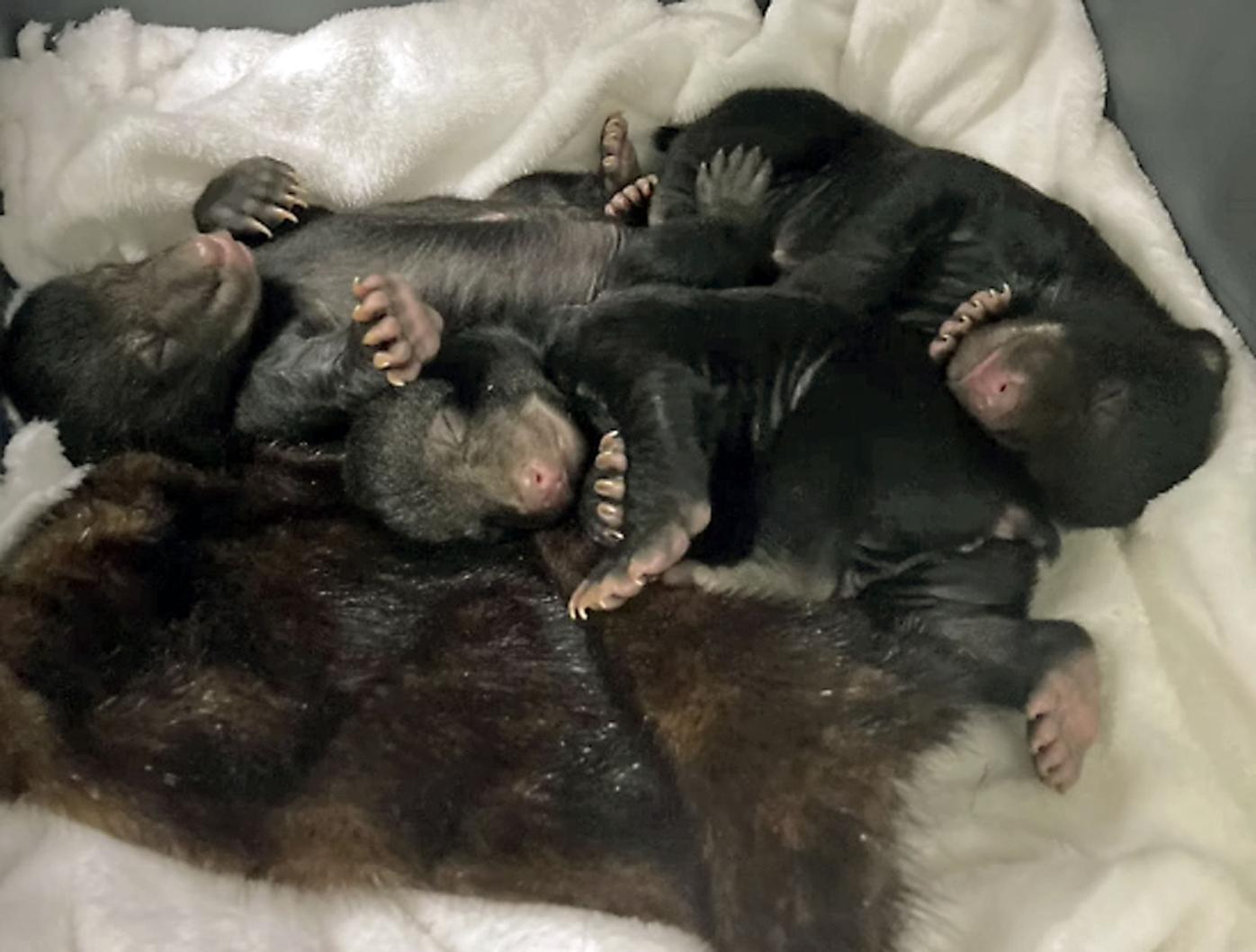 The three bear cubs during their stay at the Appalachian Bear Rescue. They had been named Jasmine, Jeannie and Magic, and are all females. 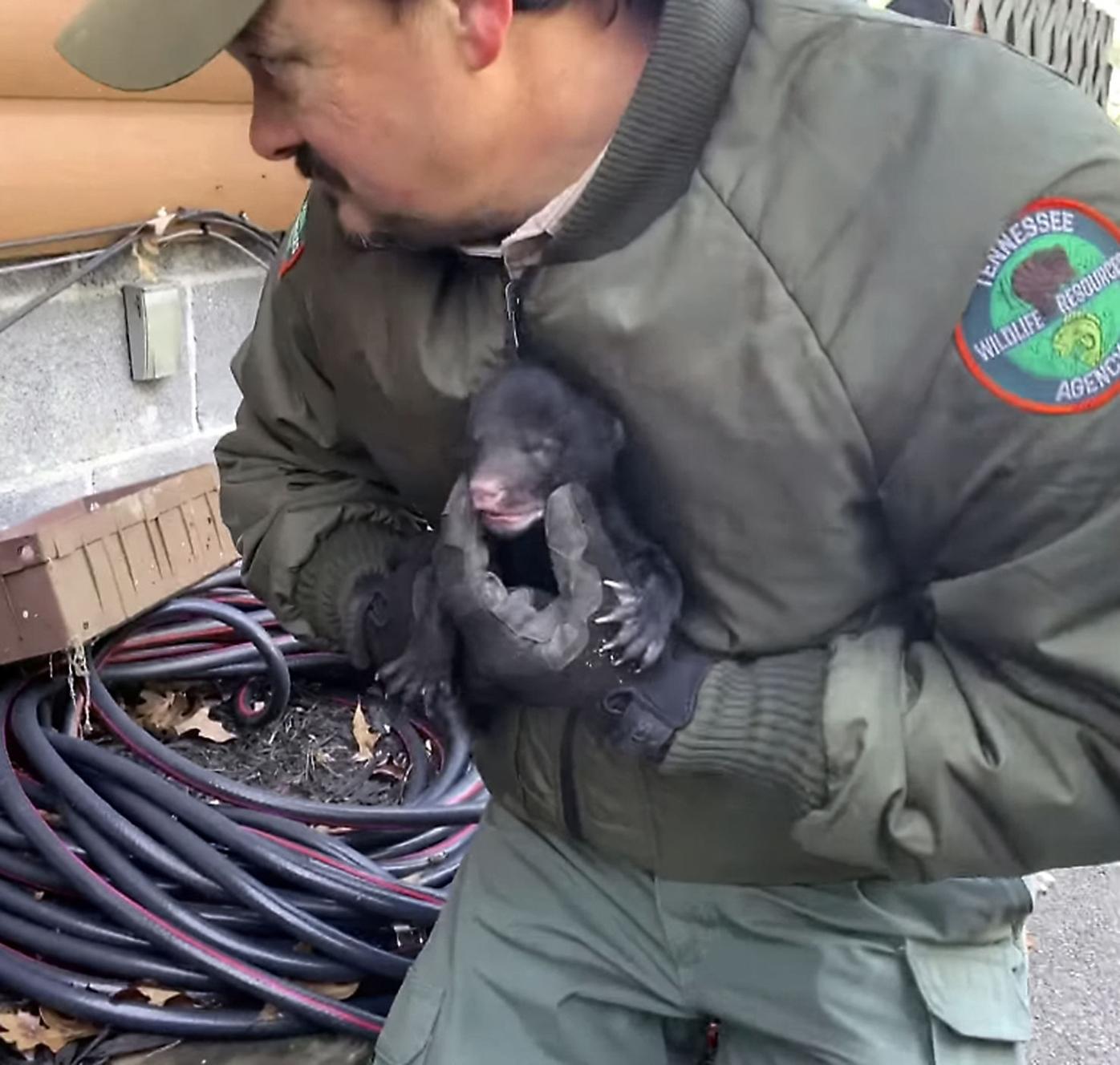 Dan Gibbs of the Tennessee Wildlife Resources Agency readies the first of three cubs for a return to her mother. 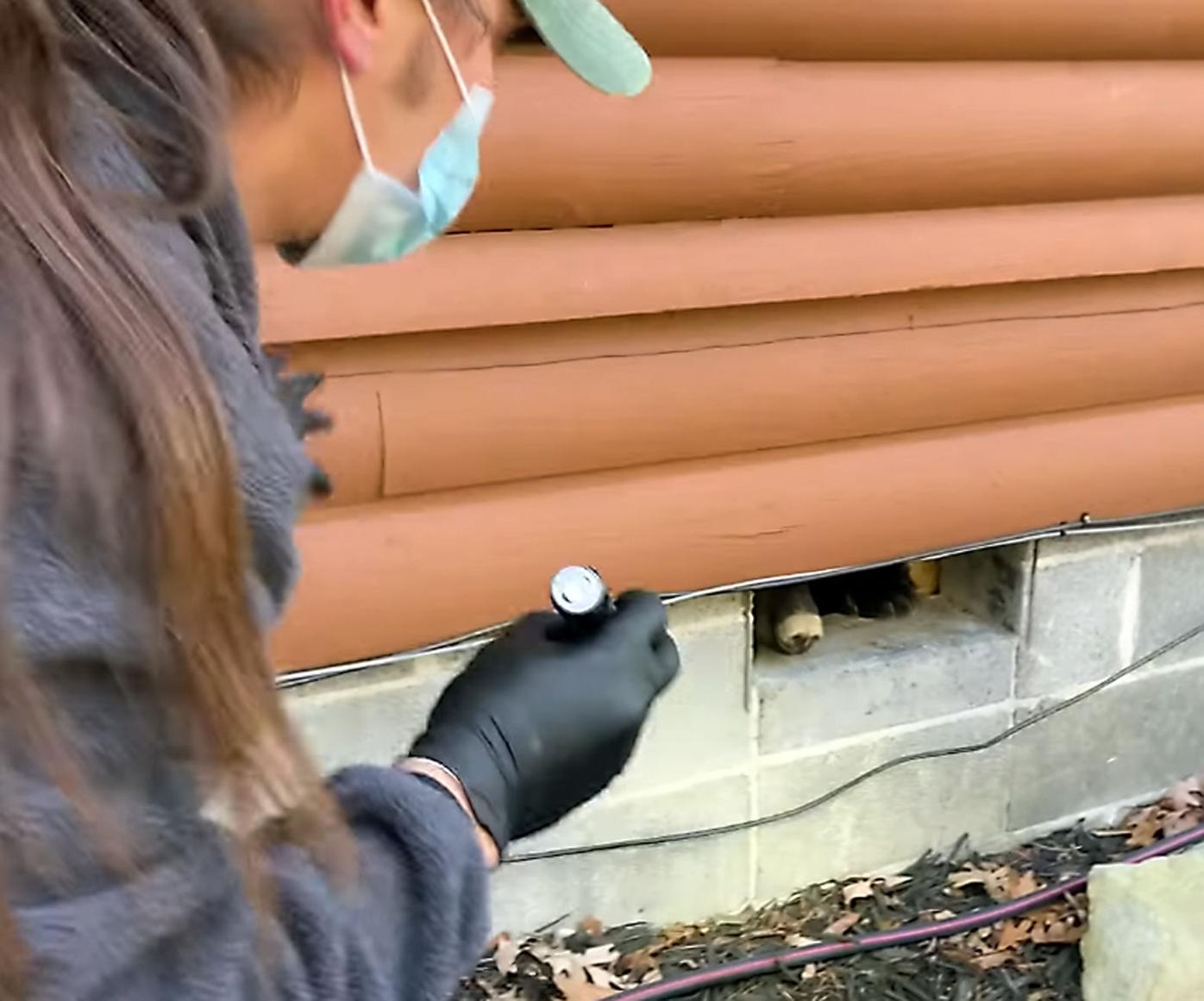 Mama bear comes to investigate as personnel get into position to return her three cubs. 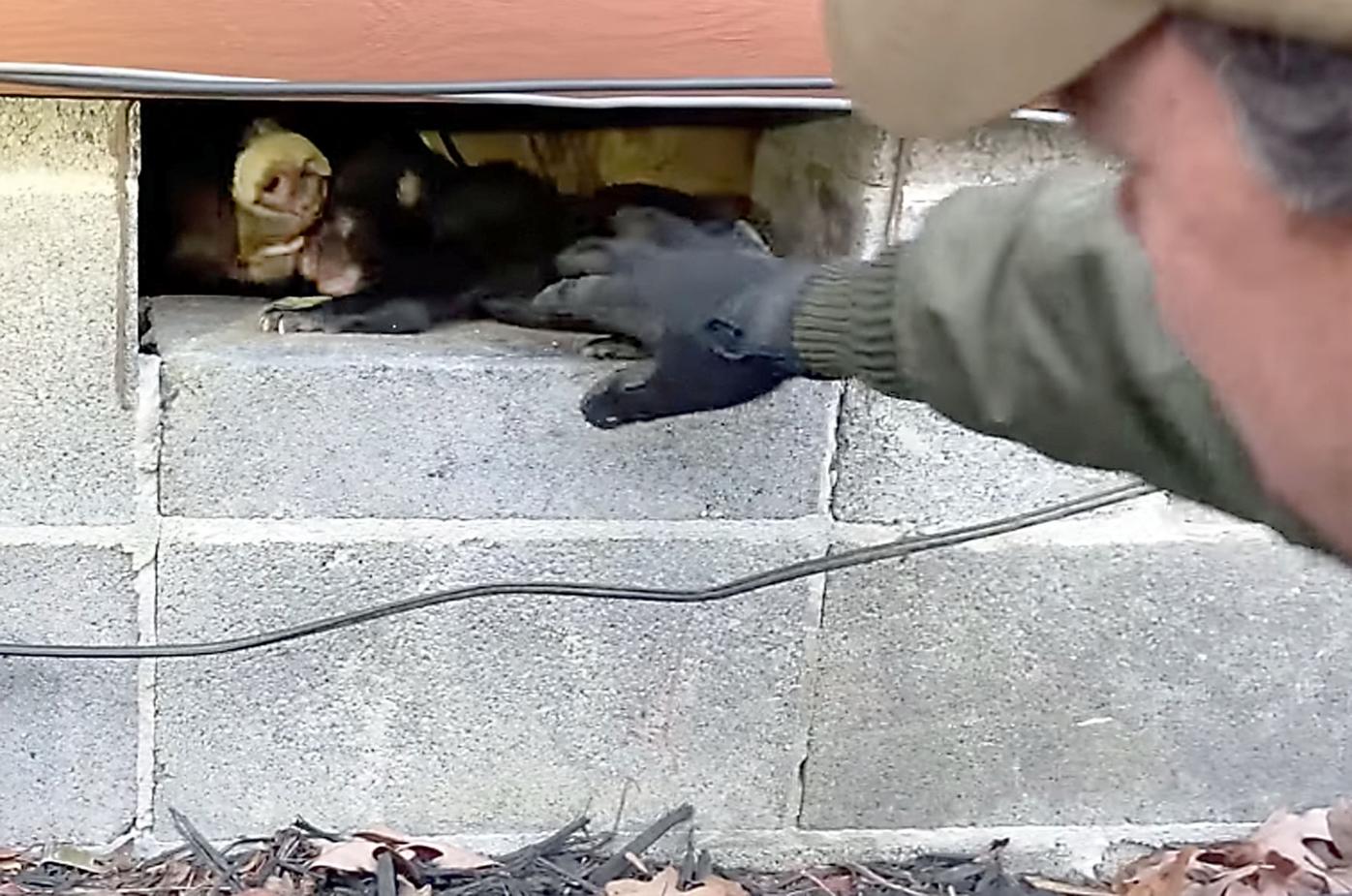 The third bear cub is retrieved by the mother, which had calmed down since her first screaming cub was returned to her.

The three bear cubs during their stay at the Appalachian Bear Rescue. They had been named Jasmine, Jeannie and Magic, and are all females.

Dan Gibbs of the Tennessee Wildlife Resources Agency readies the first of three cubs for a return to her mother.

Mama bear comes to investigate as personnel get into position to return her three cubs.

The third bear cub is retrieved by the mother, which had calmed down since her first screaming cub was returned to her.

It was the family reunion all involved had hoped for.

On Wednesday afternoon, the three 4-week-old female cubs that had been left behind in a residential crawl space in Sevier County when their mother was scared away became a whole family again. The mother had chosen the cabin in Sevier County weeks ago as her den for the winter, but a gas leak in the home resulted in the need for inspection.

That inspection revealed a large bear that weighed an estimated 275 pounds was under the house. The mama bear likely caused the leak, those at the scene now believe.

The homeowner, who The Daly Times is keeping anonymous to protect the whereabouts of the bears, said the ordeal started over the weekend with the discovery of the gas leak. After a repairman poked his head inside the crawl space to look for the cause of the problem and spotted the bear, he retreated and alerted authorities.

Kim DeLozier, the project leader for BearWild and a retired wildlife ranger for Great Smoky Mountains National Park, got a call from the homeowner about the precarious situation. DeLozier then called the Tennessee Wildlife Resources Agency, which sent David Sexton to the location.

Because neither Sexton nor the homeowner heard any cub sounds, they figured the nearly 300-pound bear was a male and it was chased from the property by the sounding of an air horn. That’s when upon close inspection, the three cubs were found, only 3 to 4 weeks old, eyes still closed. They were under some pipes.

The homeowner said by phone Thursday that he and family members assisted TWRA with getting the cubs out, including providing some towels and a blanket.

Townsend-based Appalachian Bear Rescue was called to come take possession of the tiny cargo since mama was gone. ABR takes in injured or orphaned black bear cubs so they can be properly cared for and then released back into the wild. The cubs came to ABR late Sunday.

The crawl space is tiny, the homeowner said, probably no taller than 36 inches. “i don’t know how she was able to get in there,” he said of the large bear.

Then early this week, the homeowner and DeLozier discovered the mama bear had returned. They called ABR to report the news. It was decided the best course of action was to bring the cubs back to the crawl space and reunite them with their mother.

That scenario played out on Wednesday after TRWA and ABR arrived. They removed a vent in the wall and placed the tiny cubs, one at a time, into the hole atop an Amazon box lined with a blanket; mama received them immediately, as seen on a TWRA video (https://www.facebook.com/tnwildlife/videos/2764366523878384).

“She knew their scent,” ABR Executive Director Dana Dodd said. “There was not a likelihood that she wouldn’t take them. She was taking her cubs as soon as they offered them. She was right there to accept them.”

Dodd said the mama bear had been a little agitated before that transfer, possibly due to her cubs not being there when she first returned.

“As soon as she heard one of her little ones crying, she was at that hole from across the room. She was right there,” Dodd said.

The video shows the mama bear’s nose and also her arm swipe up and collect her cub.

Dodd said nothing like this has ever happened to ABR’s charges.

The homeowner was told it was his decision on whether the bears could stay underneath his home or have them removed. He said he was told by the wildlife personnel on the scene that he could sleep on it before making up his mind.

“I have never seen a bear in the wild in my life,” the homeowner said. “This was the first one.”

He added that he didn’t need any time at all to reach a decision. “Let them stay,” he said, adding that the gas leak has been resolved and no longer poses a danger.

Dodd said the denning season usually lasts through early to mid-April. The homeowner was told this, but he was still willing to “rent” out his crawl space to a young family of bears and said he was grateful for the quick response of TWRA and also ABR for making this a story with a happy ending.

“The cubs have to get big enough and strong enough to toddle along behind their mother,” Dodd said.

The homeowner knew ABR had a Facebook Live post and was to be traveling at the time, but he pulled off to the side of the road to watch.

“I am a 59-year-old guy,” the homeowner said. “I consider myself a man’s man. When I watched the video and saw them put the cubs back in, I had tears running down my face. It just made me so happy.”