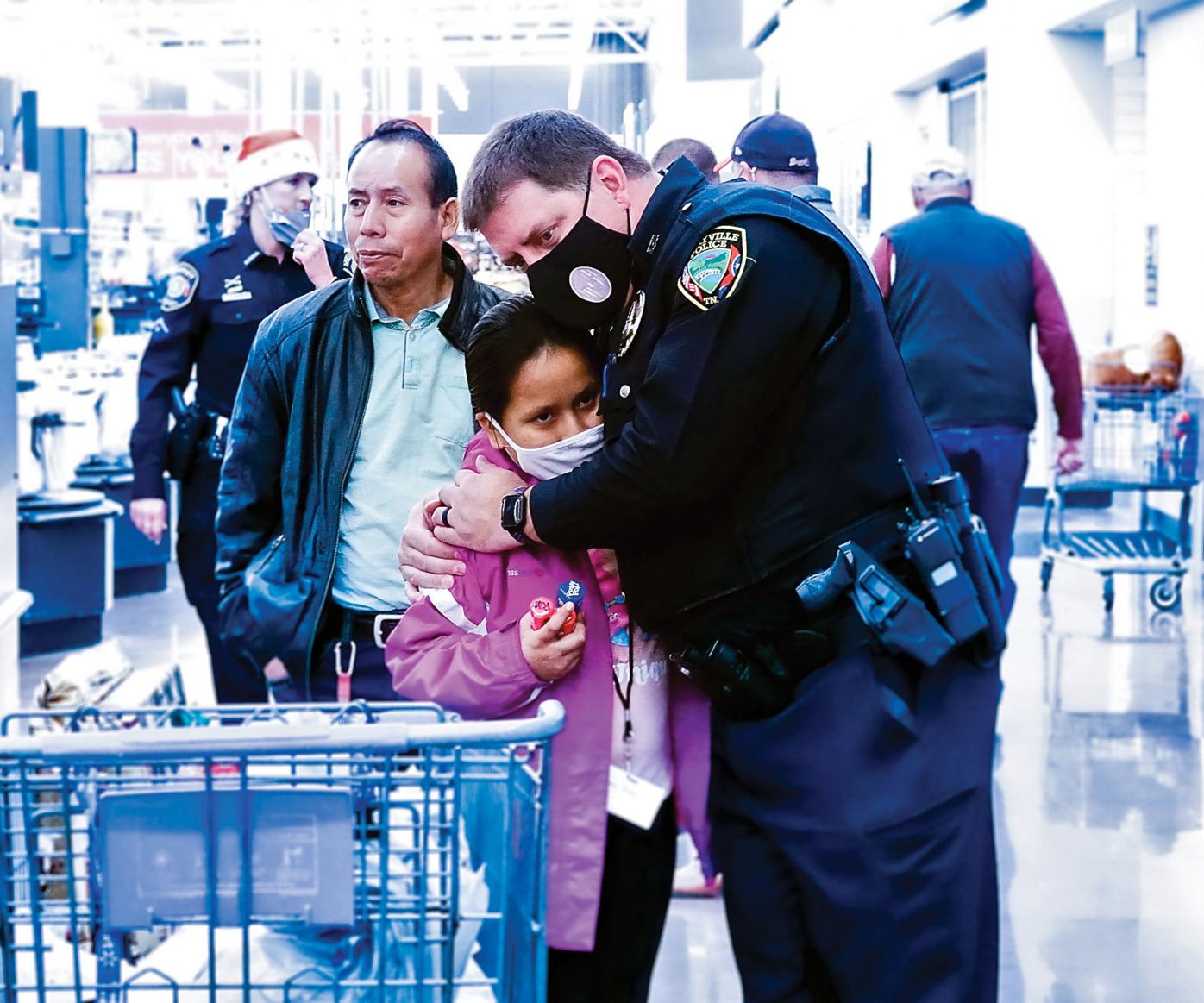 The award-winning photo shows Maryville Police Officer Clayton Hall hugging a student from John Sevier Elementary School, where he is the SRO, during the annual “Shop with a Cop” at Walmart. 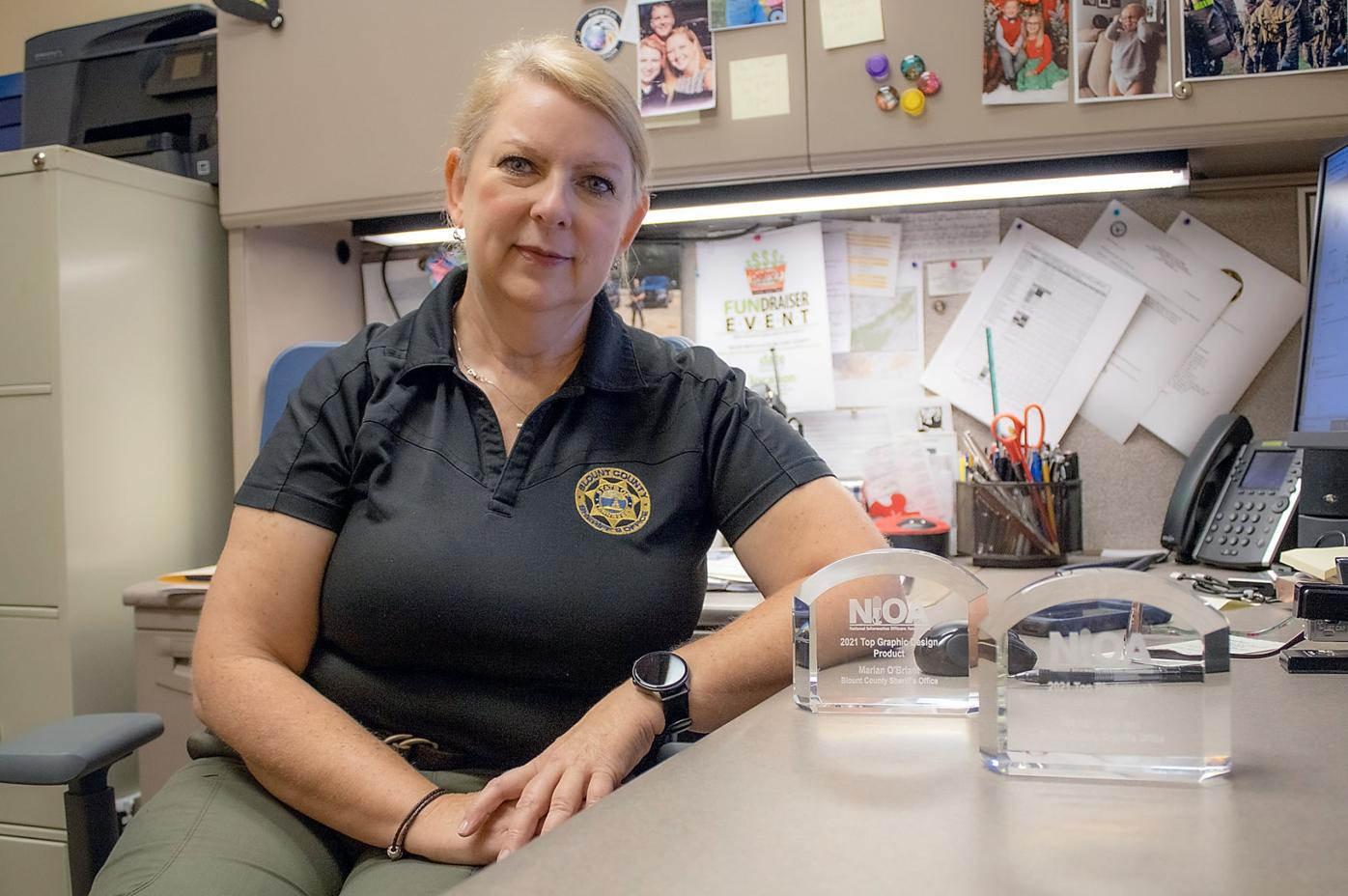 Marian O’Briant sitting at her desk in Blount County Sheriff’s Office, with her two awards for photography and graphic design. 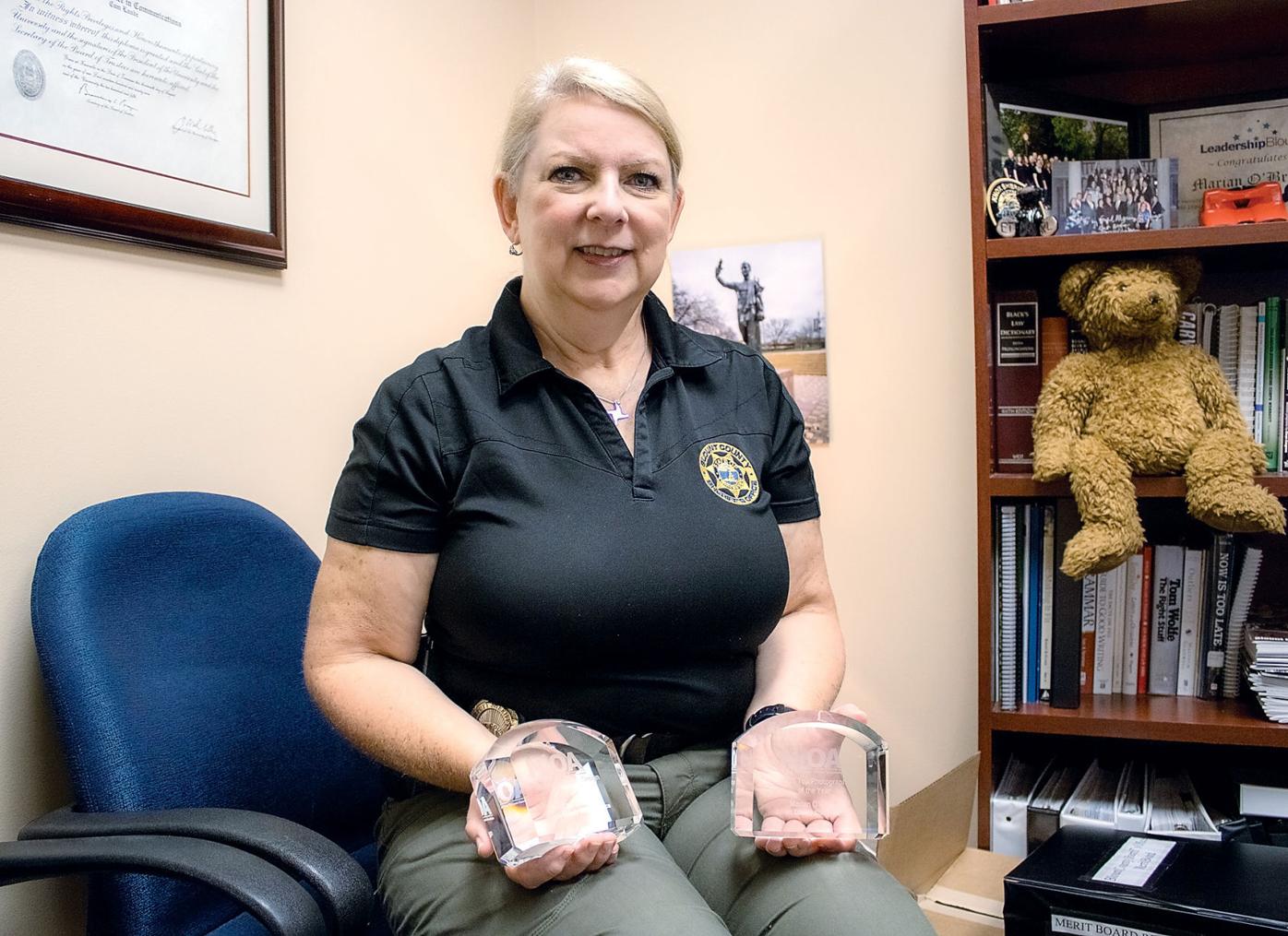 The award-winning photo shows Maryville Police Officer Clayton Hall hugging a student from John Sevier Elementary School, where he is the SRO, during the annual “Shop with a Cop” at Walmart.

Marian O’Briant sitting at her desk in Blount County Sheriff’s Office, with her two awards for photography and graphic design.

Most of the time that Blount County Sheriff’s deputies are responding to a disturbance, Marian O’Briant, with a camera around her neck, is following closely.

“Whether it be in the pouring rain or snow,” BCSO Investigations Capt. James Trentham said, “I’ve turned around and here stands Marian in a toboggan, dripping wet, and everything and hiking through the woods, step for step, with everybody else, right there with us.”

O’Briant is the public information officer for BCSO and said she probably will be until she retires. She made a home-away-from-home in her current office and has worked in one other room since starting there in October 2002.

Photos of her two kids and grandchildren hang on her metal desk. Two teddy bears, a duck with a cop uniform and a Wonder Woman figurine decorate a book shelf and the top of metal cabinets.

“I can’t imagine not being here,” O’Briant said. “You know, I’ve had other opportunities over the years for more money, but I just had to skip. I’m very committed to this place, this community.”

She has a multifaceted job, but mostly does work for internal communications and social media. With the digital evolution, Trentham said O’Briant’s job has evolved along with “instantaneous” news.

“Sometimes the smallest thing that some people or someone may not think would be beneficial, might solve a crime,” Trentham said. “That’s just the world we live in now. You know, it’s fast paced.”

“She’s able to get that information out so quickly,” he added. “It helps everyone: helps us, helps the community, first of all, but it helps us as investigators.”

In addition to social media work, she does design and photography. This year, she won two awards from the National Information Officers Association. It was the first year NIOA has chosen members to receive awards.

She was given two small, but heavy, clear plaques: one for “2021 Top Photograph of the Year” and another for “2021 Top Graphic Design Product.”

“I didn’t expect to win with it being the first year that they did those awards,” O’Briant said. “I’m happy to show what I do here and for the community to know some of the really good things that are going on here.”

The photograph featured the school resource officer for John Sevier Elementary, Clayton Hall, who’s with the Maryville Police Department. It’s a picture from the annual “Shop with a Cop” at Walmart, showing Hall hugging a student from John Sevier.

Each year, BCSO produces an annual report, which O’Briant has designed every year that she’s worked for the department. Her design of the 2020 report was the product that won her second award.

Working on it intermittently, she said, probably took her a couple of months to complete the 32-page booklet, which is mostly made up of her own photos.

Investigations Capt. Trentham keeps the annual reports from previous years tucked between paperwork in one of his metal file drawers.

“Occasionally, I’ll look for these and just, you know, the way she captures people,” he said, “the memories and stuff. ... It’s amazing.”

Trentham said, for the most part, they work together daily and that she is probably the most dedicated person he’s worked with during his 25-year career at BCSO.

Knowing the woman behind the scenes

He would describe O’Briant as more of a friend than a coworker and said she’s professional, but still personable with people at the department.

“When we’re working and we’re doing our job,” Trentham said, “but then there’s the times at the Christmas parties and stuff that, you know, she may be singing karaoke.”

O’Briant’s friend, Tara Rasher, said they met while Rasher was a volunteer at BCSO and have been friends since then, about 10 years.

“She’s very quiet and I do a lot of the talking,” Rasher said, also describing O’Briant as very detailed and involved with her work.

Sometimes, when they’re snacking and chatting, like friends do, she said O’Briant will have to take a work call, and Rasher’s impressed by how she balances her work and personal life.

They often sit on the porch that wraps around O’Briant’s cottage-like house.

“She just likes coziness and simple things,” Rasher said. “She doesn’t like flashy. She’s very cozy and likes the comfort of her home.”

They will also exchange gifts, which Rasher said O’Briant is very good at because she pays attention to the little details about a person.

When Rasher was sick last year, O’Briant brought her favorite candy to her house and a card, a gift that cost more in sentimentality than dollars.

“The card was so funny that it made me laugh when I was down and out,” Rasher said. “So, she does the little things like that. She’s very simplistic, but she’s very sentimental.”