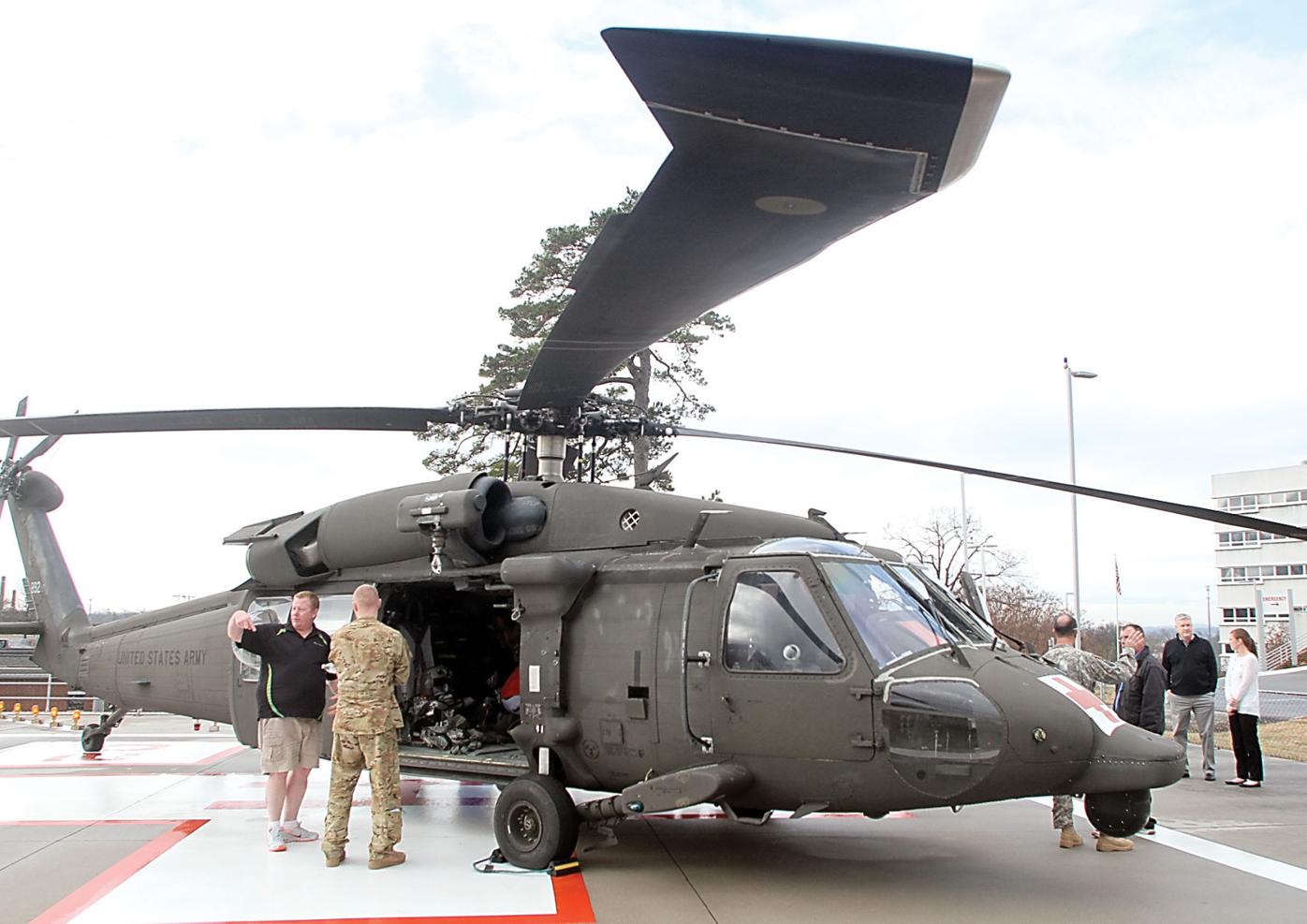 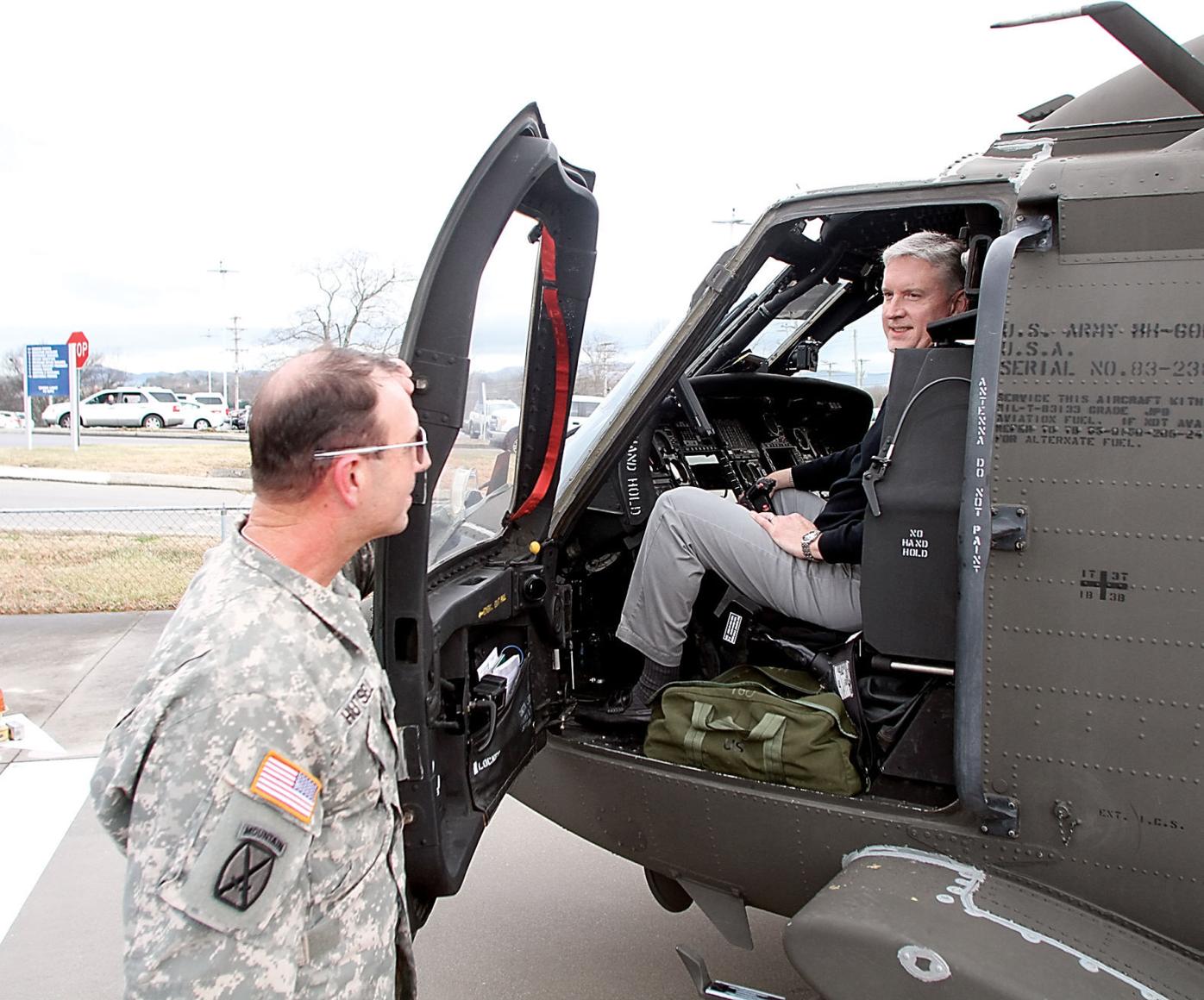 Blount Memorial Hospital CEO Don Heinemann talks with Chief Warrant Officer 4 Brad Hutsell as he sits in the cockpit of the Black Hawk at the hospital Thursday. 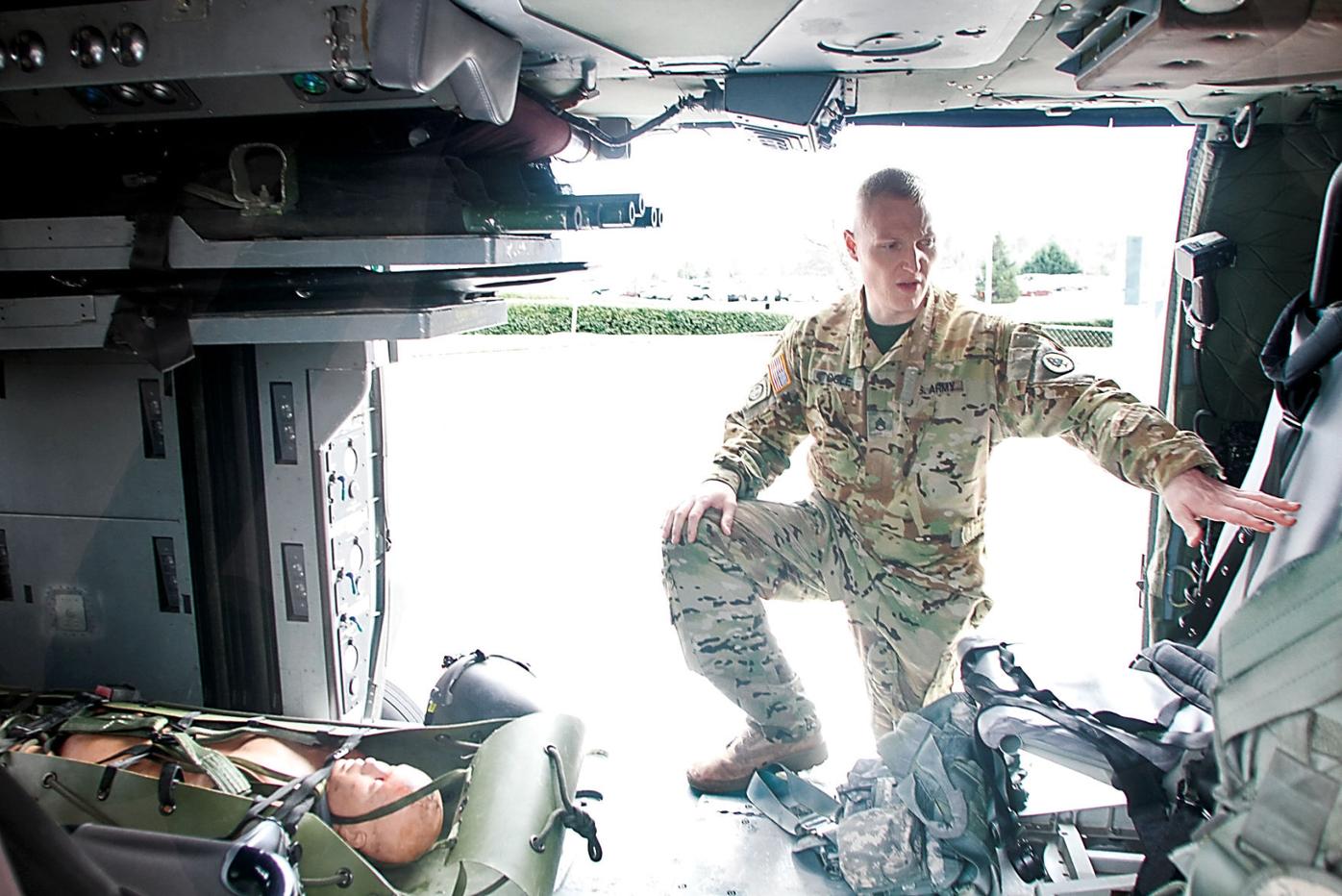 Staff Sgt. Nolan Ogle talks about the interior of the Black Hawk helicopter that landed at Blount Memorial Hospital Thursday for employees to see.

Blount Memorial Hospital CEO Don Heinemann talks with Chief Warrant Officer 4 Brad Hutsell as he sits in the cockpit of the Black Hawk at the hospital Thursday.

Staff Sgt. Nolan Ogle talks about the interior of the Black Hawk helicopter that landed at Blount Memorial Hospital Thursday for employees to see.

The Black Hawks are back.

In November 2016 a Tennessee Army National Guard Black Hawk helicopter assisted in dousing wildfires in Walland by carrying water from Little River to dump on the blaze.

That December, an Army Guard Black Hawk assisted a Great Smoky Mountain National Park technical rescue team in extricating three victims of the fatal crash of a Cessna 182 in the Park.

The sound of a U.S. Army Black Hawk helicopter is tough to ignore, particularly when it’s landing just a few yards away. It’s a sound that drew a crowd of bystanders to the helipad at Blount Memorial Hospital Thursday. Many were hospital employees eager to see just how this 17,000-pound piece of equipment could be affecting their jobs in lifesaving emergencies.

“This is a beast,” said Brad Hutsell, Army Chief Warrant Officer 4 (CW4) and full-time instructor pilot. “This helicopter can handle multiple patients. In a mass-casualty situation, we can handle more patients than any other helicopter. We also can get into areas that other helicopters can’t get into, so we’re trying to establish areas and hospitals where we can land in those situations,” he said.

It wasn’t long after Christmas, on Dec. 28, 2017, that a pair of Black Hawks caught plenty of people’s attention when they took turns performing test landings and takeoffs at Blount Memorial. Video of their arrivals and departures spread quickly on social media, if for no other reason than that it’s a sight not often seen. This week, they returned to the hospital to give staff members an up-close tour.

“These aircraft have been in Tennessee for a while, but a couple of years ago, the medevac Black Hawks replaced the Kiowa attack scout aircraft that we had at the airport,” Hutsell said. “We got everybody up to speed, but this airframe hadn’t been in East Tennessee for several years, so what we’re doing with Blount Memorial and other hospitals is first, letting them know we’re in the area and second, what our capabilities are.”

The Black Hawks are based at Army Aviation Support Facility No. 2 at McGhee Tyson Air National Guard Base, where the Kiowa Warriors were based until those helicopters were retired by the Army.

“It’s a great helicopter to get in and out of the mountains with, but it is big,” Hutsell continued. “This helipad was built for a tank, if you will — it’s rated to support up to 20,000 pounds. We’re sitting here right now at about 17,000 pounds, and most elevated pads cannot handle that. Blount Memorial’s helipad just happens to be one that can handle this helicopter.”

“In talking with officials from the Army, they were taking a look at all the hospitals in the region to see who had the appropriate helipads that could accommodate the Black Hawk,” Heinemann said. “We’re one of only two or three hospitals in the region that have that, so they expressed an interest in doing some touch-and-go landings and coming back today to do some orientation with our emergency room staff and give them a walkthrough. It’s critical that we have this relationship in place in case of a mass-casualty event, an evacuation or even a search-and-rescue situation that they need to bring to our hospital.”

And search-and-rescue situations aren’t all that unlikely given Blount Memorial’s proximity to the Park.

“We started our relationship with the Great Smoky Mountains National Park about a year and a half ago doing rescues. Blount Memorial Hospital is at the base of the mountains, so anywhere we are in the area, we want to make this hospital an option for us to bring patients to,” Hutsell said.

“A lot of their search-and-rescue operations take place in the Smokies, and we’re the first hospital they can get to in a lot of those cases, so we wanted to make sure to practice our emergency drills with the Black Hawk so when the time comes, we’re prepared to accommodate patients they might bring to us,” Heinemann said.

For a visit that began with an unmistakable sound, there were experiences for other senses, from the smell of the fuel to the feel of the switches and controls to the sheer weight of seeing something like this up-close and in-person.

Have to agree...very insensitive headline. As a Somalia veteran, I have to question if the individual who approved this headline had a clue what happened in Mogadishu on 3-4 October 1993.

not the best headline ... remembering the brave men we lost during the event in Somalia