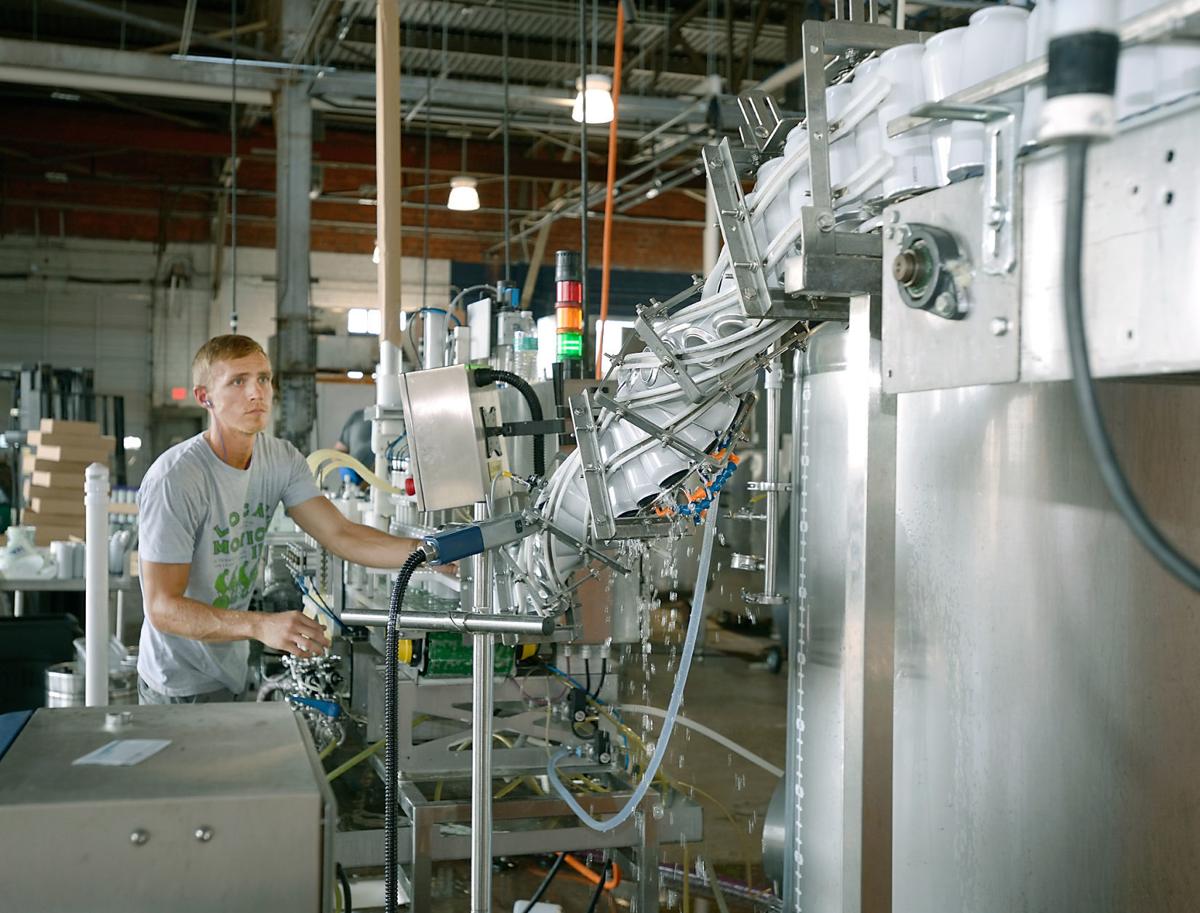 Nicholas Gibson oversees machinery preparing and filling cans at the Blackhorse Brewery in Alcoa on Tuesday. 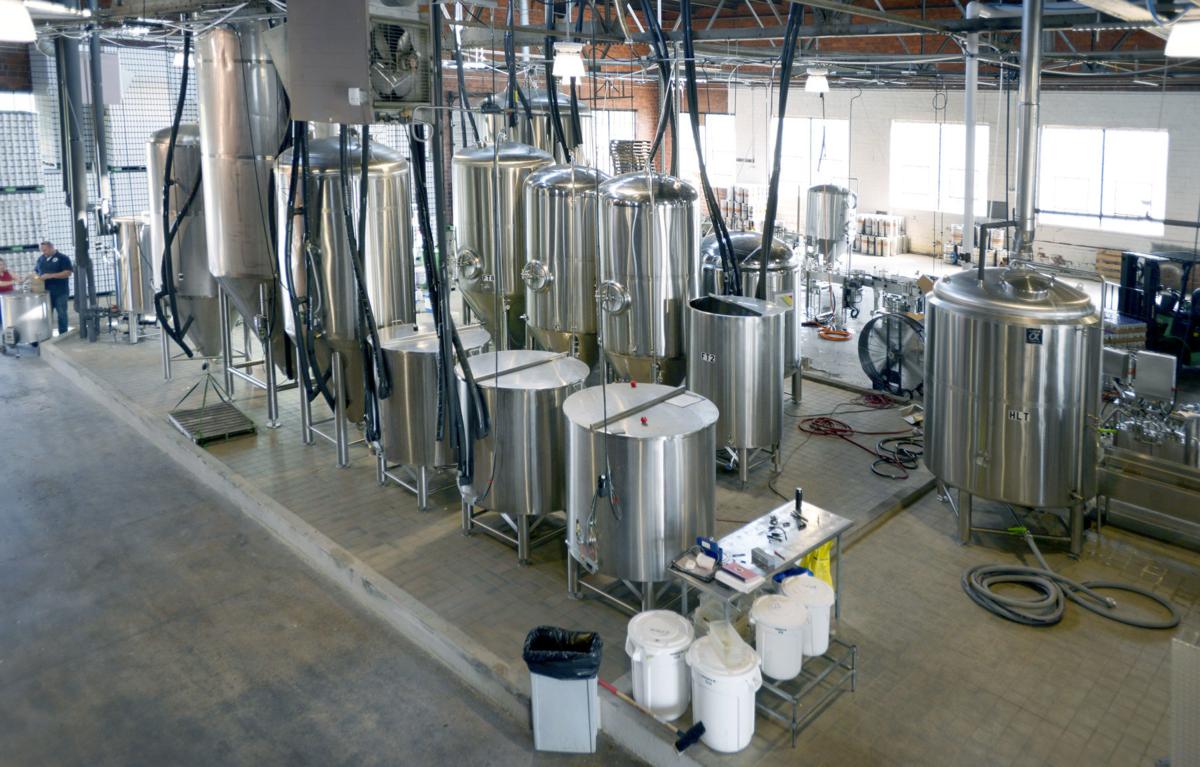 The old Alcoa city garage at the corner of North Hall Road and West Bessemer Street is the new home of Blackhorse Brewery. 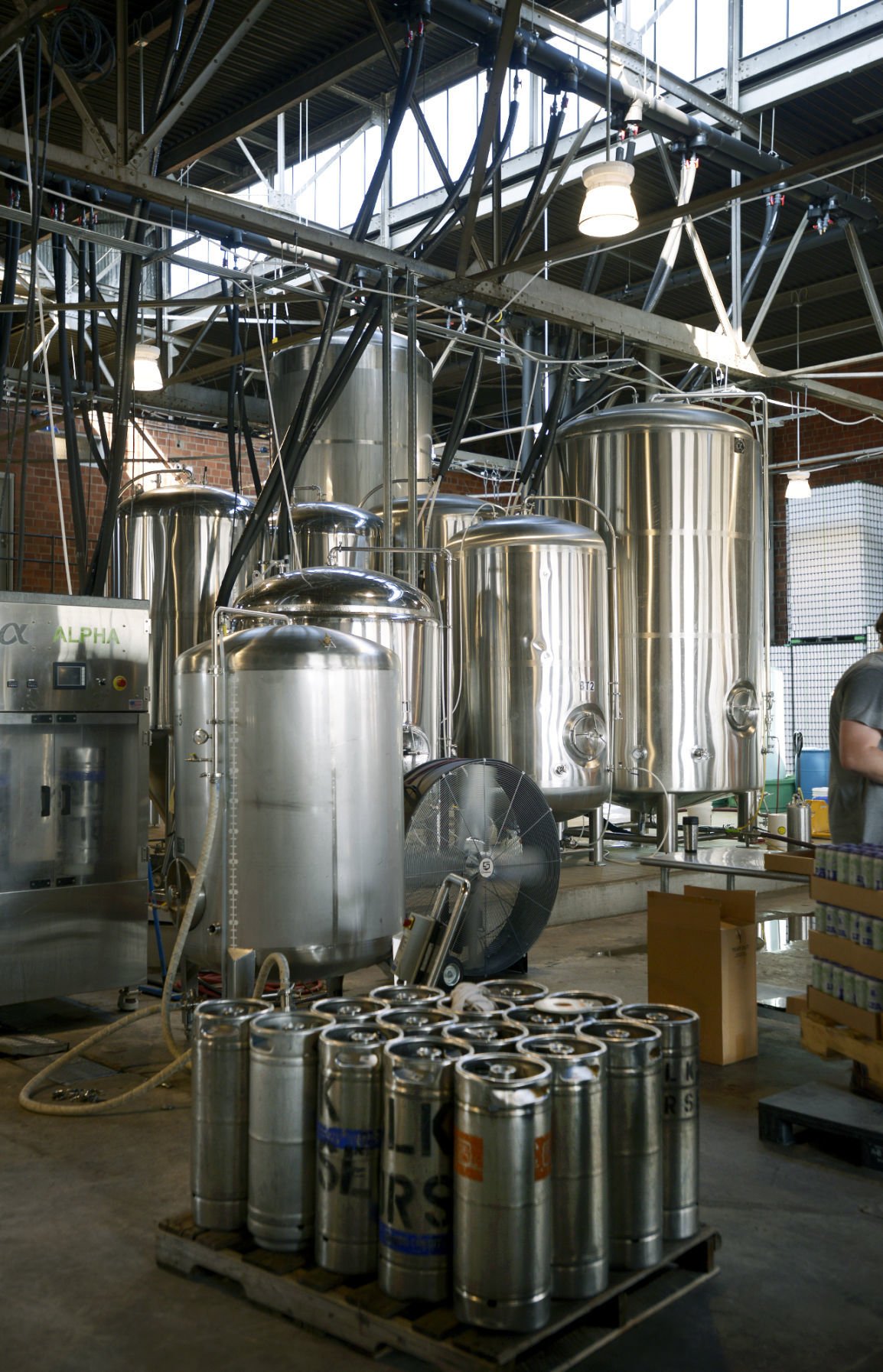 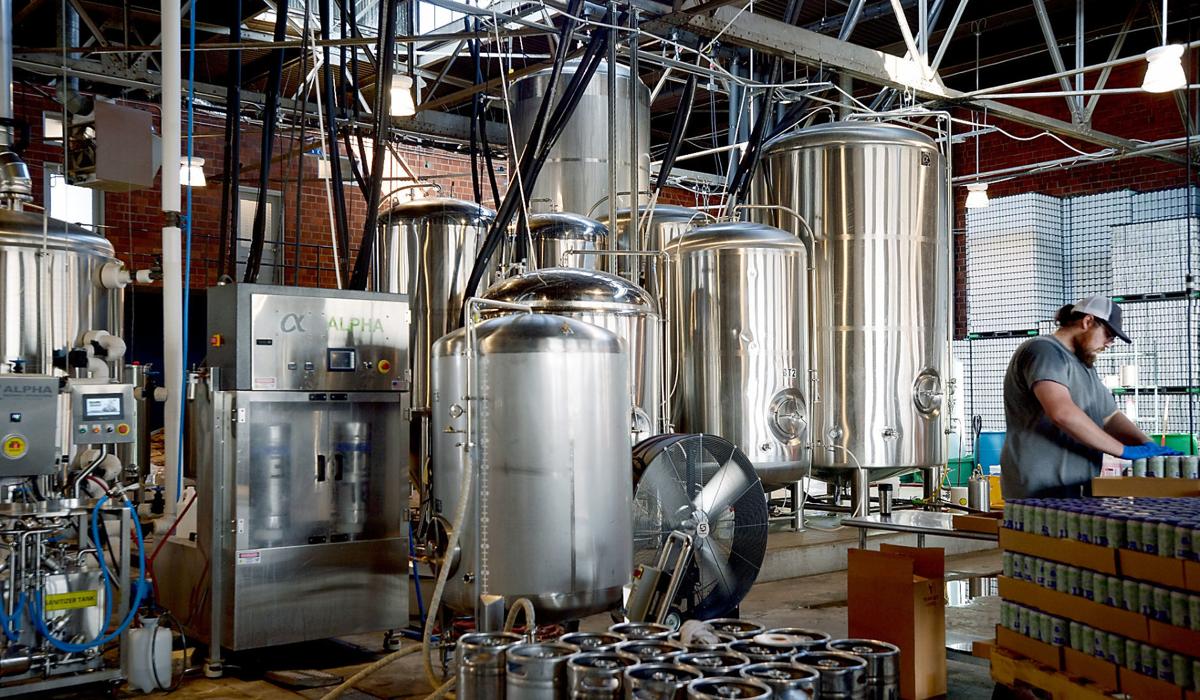 Head brewer Quinten Webb works beside vats at the Blackhorse Brewery in Alcoa on Tuesday. 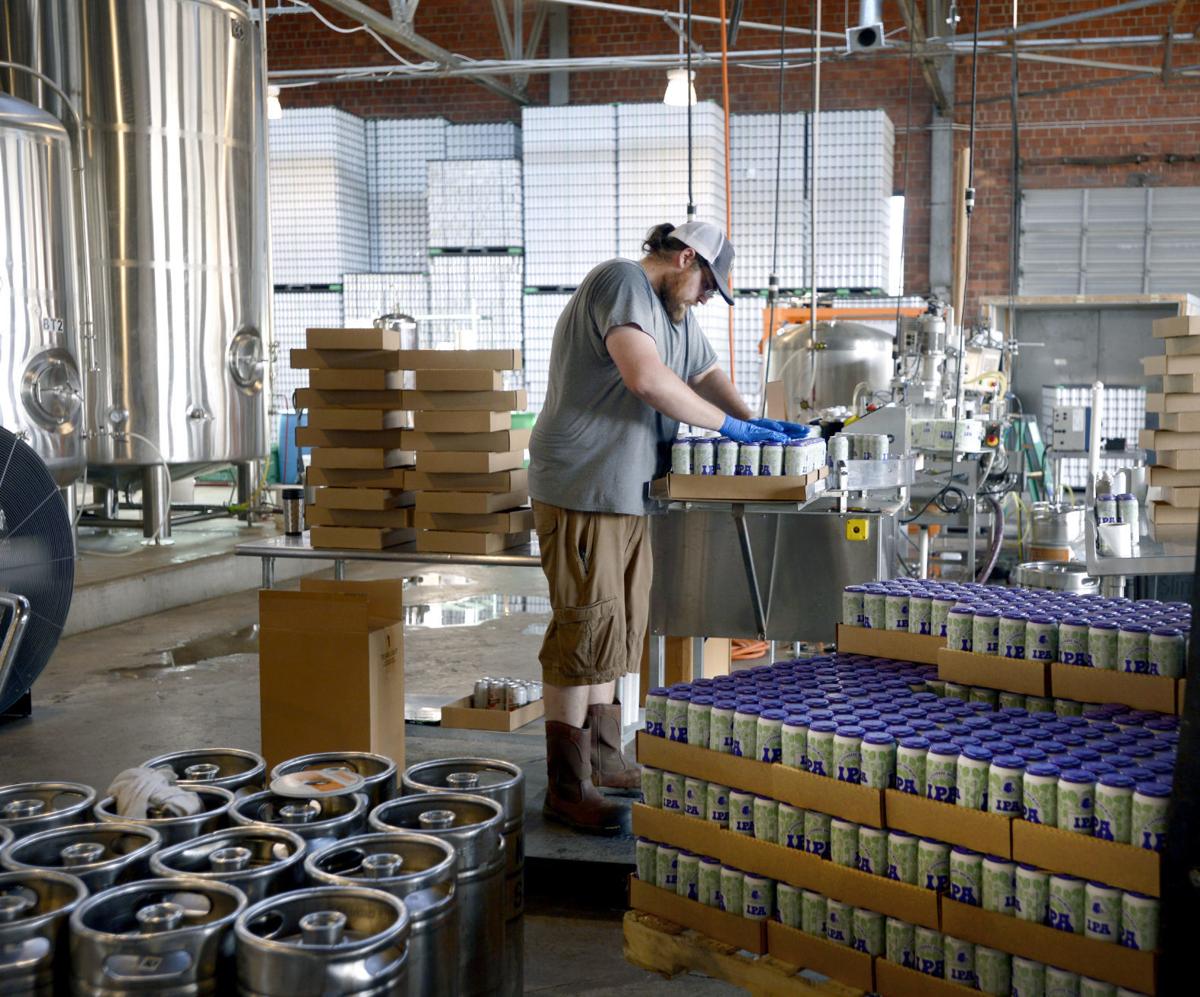 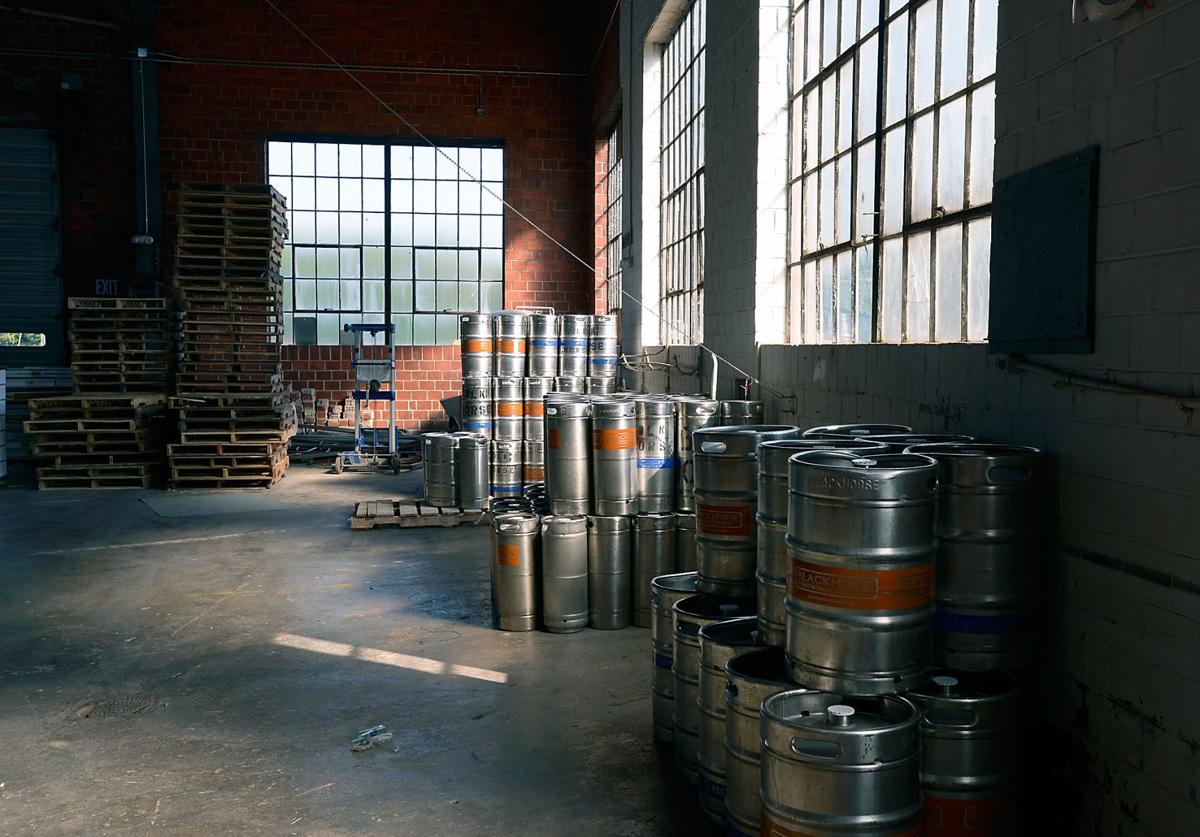 This is a corner of Blackhorse Brewery, where kegs are stored, that had been considered for a restaurant dining space. It's now targeted to be part of the kitchen.

Nicholas Gibson oversees machinery preparing and filling cans at the Blackhorse Brewery in Alcoa on Tuesday.

The old Alcoa city garage at the corner of North Hall Road and West Bessemer Street is the new home of Blackhorse Brewery.

Head brewer Quinten Webb works beside vats at the Blackhorse Brewery in Alcoa on Tuesday.

This is a corner of Blackhorse Brewery, where kegs are stored, that had been considered for a restaurant dining space. It's now targeted to be part of the kitchen.

The anticipation is getting to curious Blount Countians. They drive down Hall Road through the Bessemer Street intersection and see the old city of Alcoa garage, now the Blackhorse Brewery. The parking lot is new, but empty except for a pickup or two. Quiet except for UPS and FedEx trucks making deliveries, or beer trucks loaded up and rolling off to wherever.

People are wondering about the restaurant that was supposed to be there. Jeff Robinson, co-owner of the Blackhorse Brewery along with wife, Sherri, has heard it plenty.

“Oh, we get asked a lot. We go to Lowe’s to get stuff, we go over here to get some lunch, and go up to the city offices. A lot of us wear Blackhorse shirts, and they’re like ’Hey, where’s the restaurant?’” he said.

On Tuesday, as he stood on the brewery floor between the canning line and a wall of windows, he explained. “It’s kind of a big process for us, and we’re a small group.”

At the beginning of this year, Robinson was hoping to have the restaurant portion of the Blount County Blackhorse Brewery open by fall.

What happened? In food prep lingo, call it portion control. As the brewery took shape within the four walls of the venerable garage, the size of the whole thing got too big for the building’s stomach. Made of bricks fired across the street at the ALCOA Inc. brickworks around the 1930s, the Blackhorse Brewery of today is built for the ages. This is not a structure to be shoved around for modern convenience sake.

The original idea was to contain the restaurant inside the east side of the building, along the wall of windows looking out on Hall Road. A beer garden would enlarge the dining space.

As Robinson talked, he stood next to the culprit, if it can be called that. The canning line is on a roll, so to speak, with a line of aluminum cans twisting, tilting and diving down a conveyor through a spray of water.

All part of the process and it all takes up space.

“One of the first things we realized, if this is going to be a wall, we’ve got to be able to drive a forklift around this thing and that wasn’t going to happen,” he said while standing at the planned interior wall of the dining room.

On the other side, stainless steel tanks rise toward the high ceiling.

“Since we’ve gotten in here, our beer production has ramped up. That’s why we’re already adding more tanks. You come back this time next month, that tank farm over there will be a little bit bigger, a few more of ’em. So that’ll be pretty cool,” Robinson said.

“Where we’re standing now looking at this, in our original plan this was going to be a restaurant. It’s obvious now that wasn’t a good plan,” he said with a chuckle.

He eyed the south wall. It was empty space at year’s start. It’s filled now with coolers refrigerating beer for transport. The restaurant’s kitchen was supposed to occupy that space. No more. The new plan has not just a beer garden, but for a new building attached to the old.

As he stood near where the entrance will be, Robinson offered his vision, arm in motion, finger pointing.

“This will be opened up and you’ll enter the restaurant out there right on that edge, and this will be the shop area, where we’re standing right now. This will be the window area and from that column over this way, going that way, will be a long linear kitchen.” Those two window areas basically remain, panes out and replaced with reflective glass, and the frame gets painted. Then like that’s a doorway and this is a doorway and the exterior of this building becomes part of the interior of the new building and those two windows are part of the decor of the new building …”

Robinson goes on, explaining the new vision. He has regrets about not being able to utilize the expanse of east wall windows so diners can watch the brewery. But there will be windows at the waiting area and gift shop, so guests will get to see it, just not view it while eating and drinking.

Most of the window panes will be rehabbed for use in other parts of the building. Besides, unless the can line is operating or kegs are being filled, there’s not much action to see in the brewery, Robinson notes.

“Really and truly, the stainless steel tanks don’t do much. So once you’ve looked in and you’ve seen ’em, they’re not getting up to anything else. That’s kind of what they do, they just sit there.” Robinson has maintained his humor through this extended venture.

With a new plan, Robinson is figuring on 10 more months to completion. That’s the hope, anyway. Renovation of an old building with the inclusion of a new structure is not an exact calendar science. For Robinson one thing is certain, the Blackhorse Brewery restaurant will happen.

Laughing as he said it: “The parking lot is already here, so we better build a restaurant.”