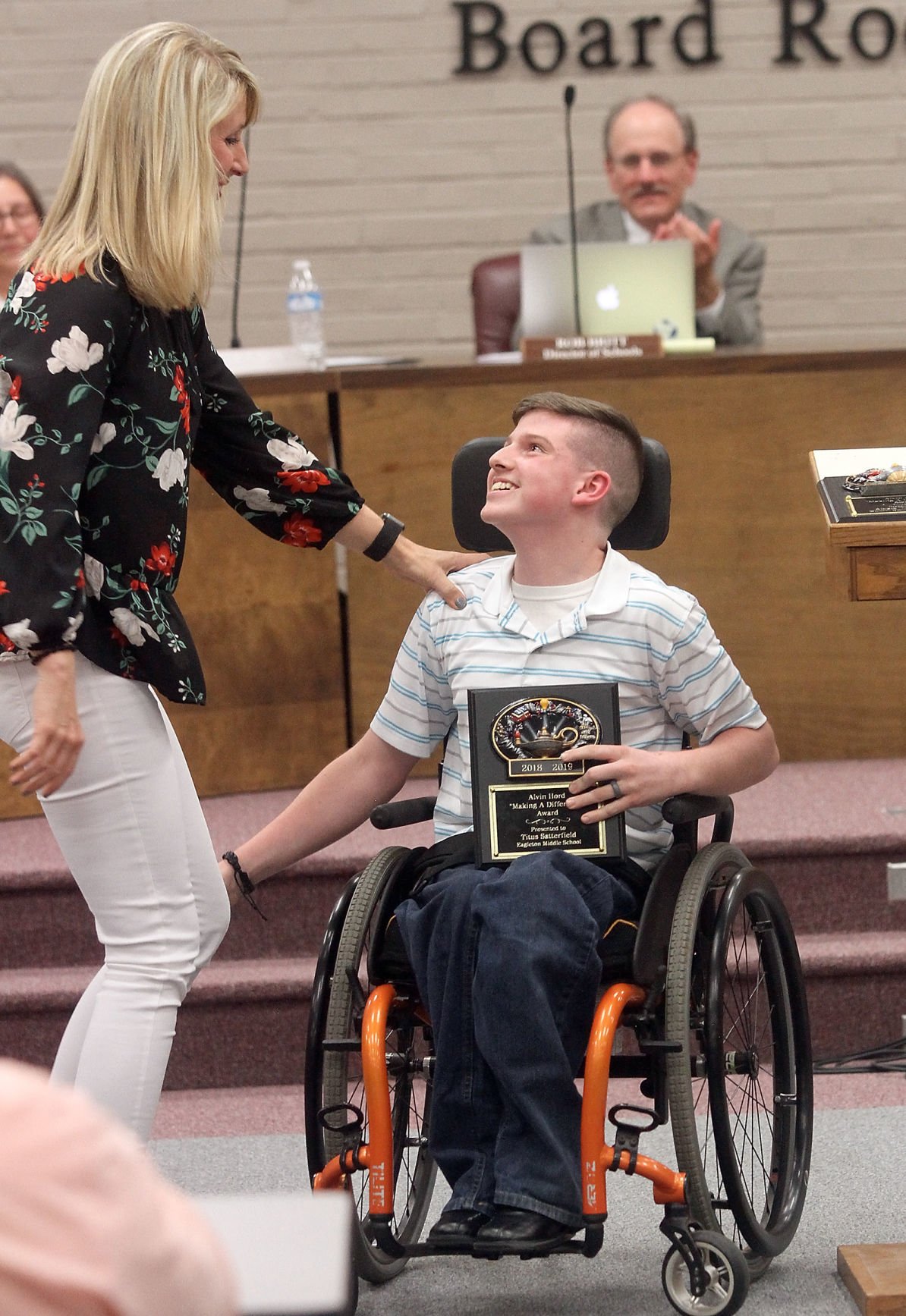 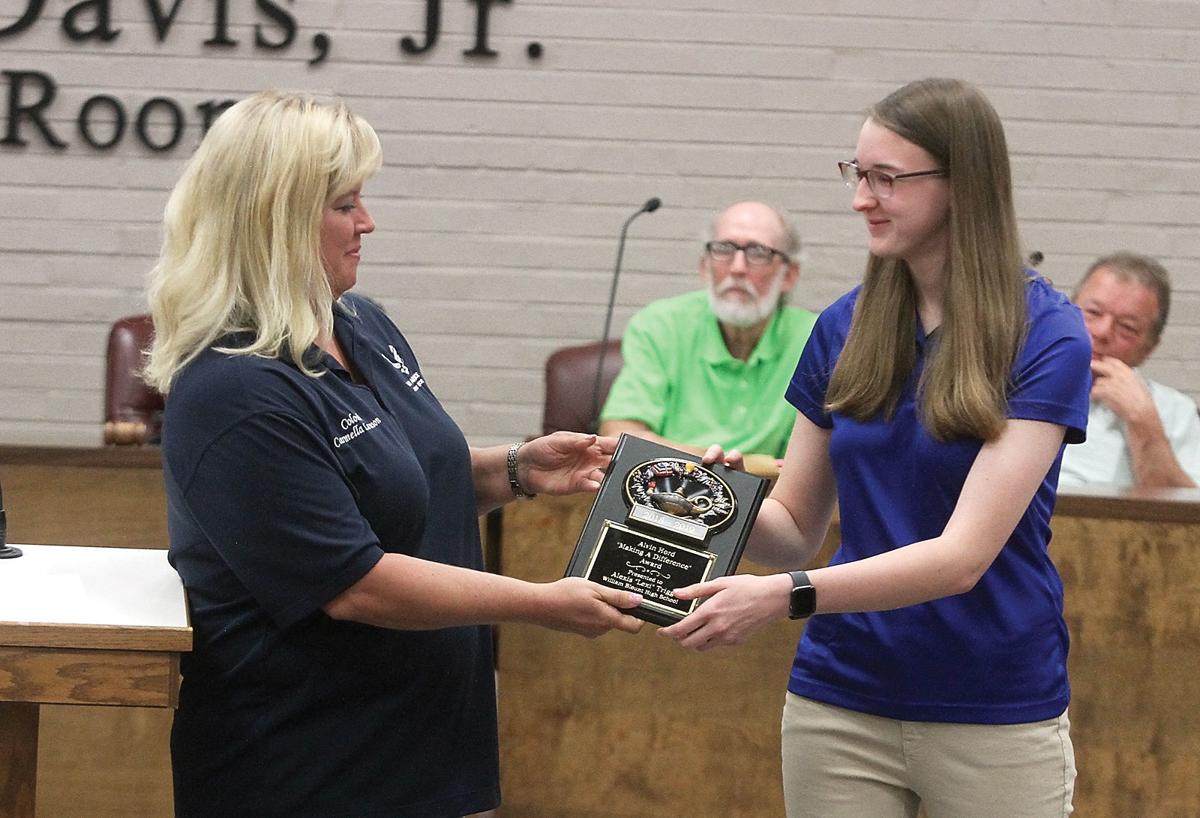 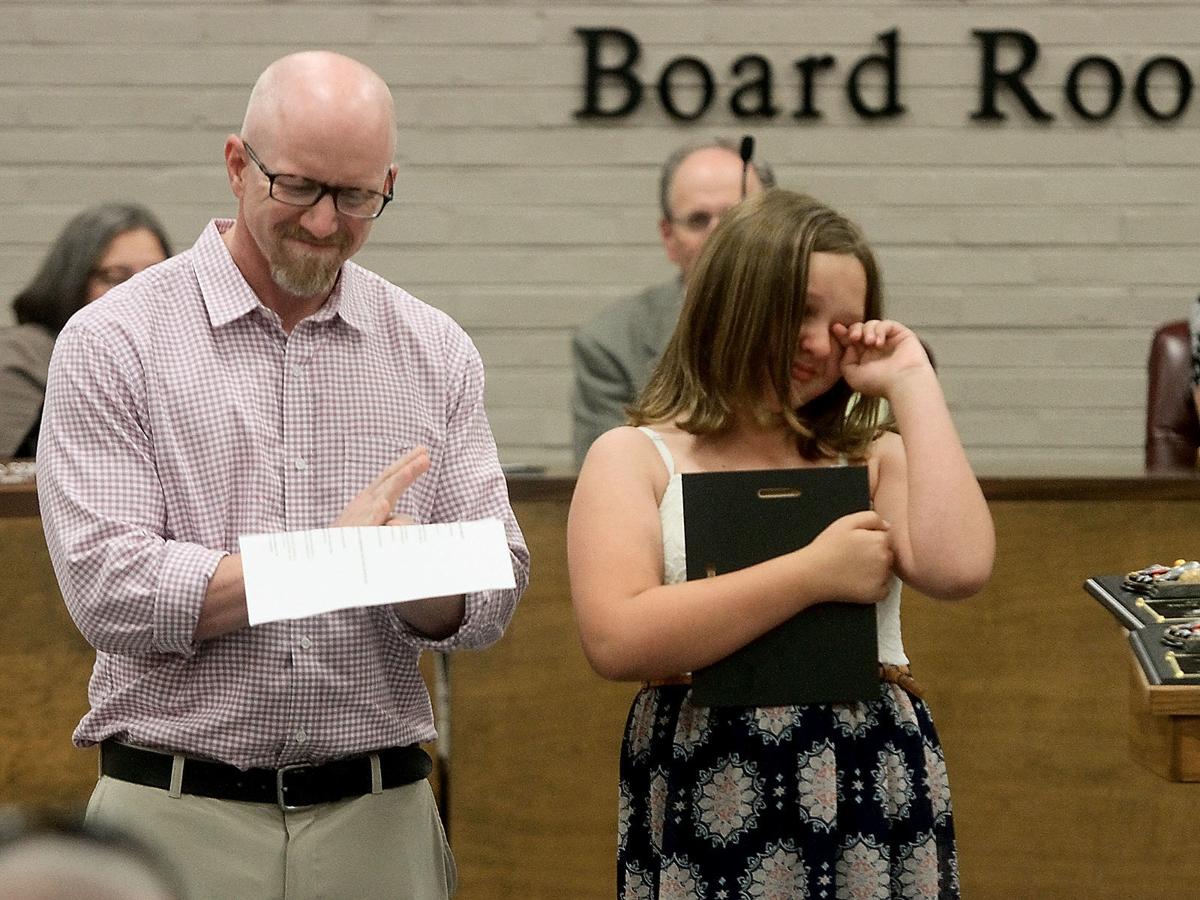 Addison Willson looks at her family and wipes away a tear after Rockford Elementary School Principal Chad Tipton presented her the Alvin Hoard Making a Difference Award during Thursday’s Blount County Board of Education meeting at the Central Office.

Addison Willson looks at her family and wipes away a tear after Rockford Elementary School Principal Chad Tipton presented her the Alvin Hoard Making a Difference Award during Thursday’s Blount County Board of Education meeting at the Central Office.

Before Titus Satterfield received an award for good citizenship Thursday night, he gave his principal a thank-you card.

Titus was one of three students honored with the Alvin Hord Making a Difference Award from the Blount County Board of Education. The award is named for a longtime administrator who retired in 2009 and still reads to students in the schools.

For example, when members of the Veterans of Foreign Wars came to the middle school to give eighth graders copies of the U.S. Constitution, Titus had written a card for veterans, personally thanking them for their service.

“Any day recognizing anybody, he has thank-you cards ready,” Russell said. The one he gave her that night said, “The best principal ever.”

“He lied,” she told the board with a laugh.

“Titus Satterfield is making a difference at Eagleton Middle School, in his family, in every circle of influence that he enters in,” Russell said, always thinking about how to brighten someone else’s day.

As the group commander this year, Lexi was in charge of more than 180 cadets and led them to meet a goal of completing more than 4,000 hours of community service, Col. Carmella Lawson told the board.

In the past four years, Lexi has completed more than 290 hours of community service herself.

Addison Willson, a fifth-grader at Rockford Elementary School, is “a wonderful role model of our school, our community and our school district,” Principal Chad Tipton told the school board.

“I knew exactly who I wanted to recommend for this,” Tipton said, referring to the honor roll student who also is on the safety patrol.

The board also granted tenure to 82 educators who have been with Blount County Schools for at least five years and received Level 4 or Level 5 evaluation scores.

Those receiving tenure are:

In other action Thursday, the board approved allowing the director of schools and fiscal administrator to approve budget transfers within departments and inform the board monthly, instead of waiting for the board to vote on every transfer.

Troy Logan said during his 18 years in the finance role he did not recall the board ever denying such a transfer, and those budget transfers do not require approval from the Blount County Commission. The school board approved eight such transfers Thursday.

At the beginning of the meeting, Chair Debbie Sudhoff recognized Terry Tipton, who is retiring after serving as the school board’s secretary for 14 years.