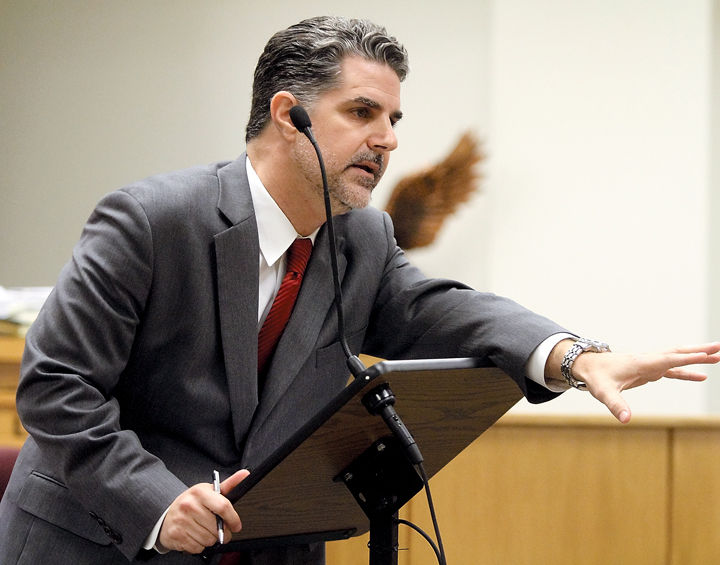 In this photo from July 16, Maryville defense attorney Rob White presents his closing arguments to a Blount County jury in the homicide retrial of Jimmy Lynn Rauhuff. 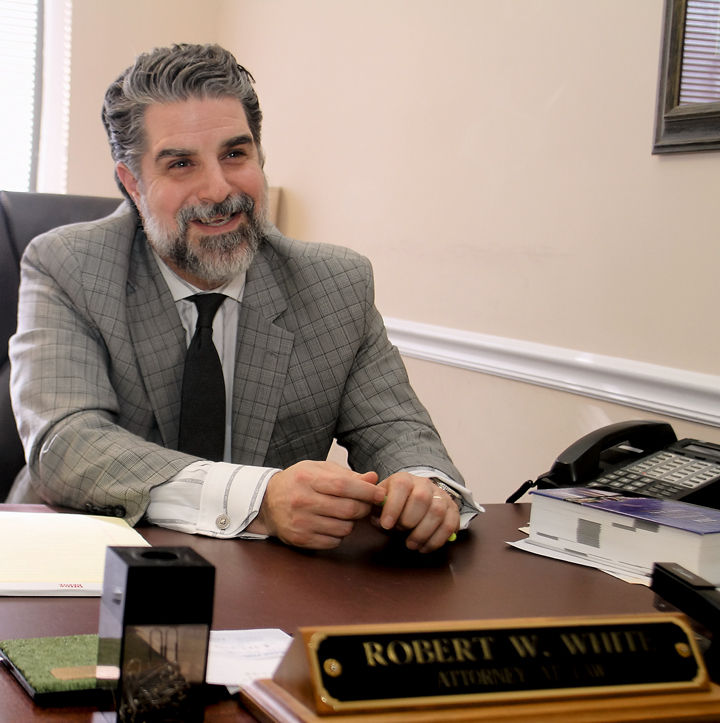 Rob White sits in his downtown Maryville office during a Jan. 28 interview where he discussed his work as a criminal defense attorney. White has practiced law in Blount County for 20 years and has been involved in several high-profile cases. 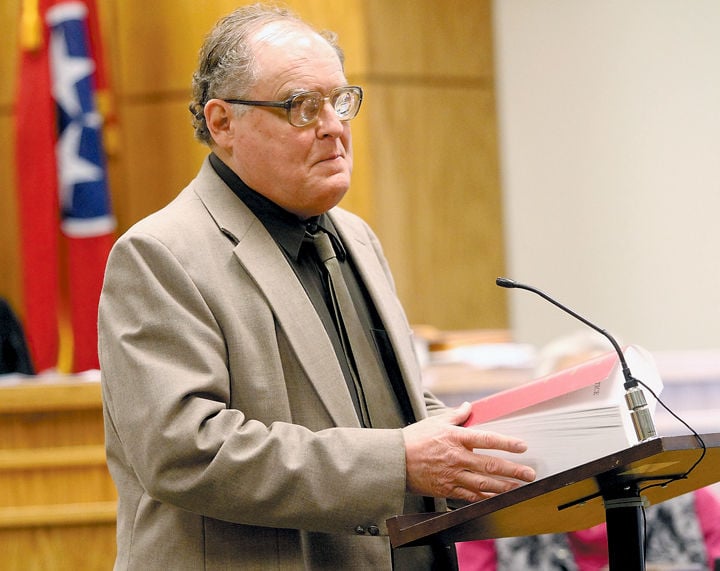 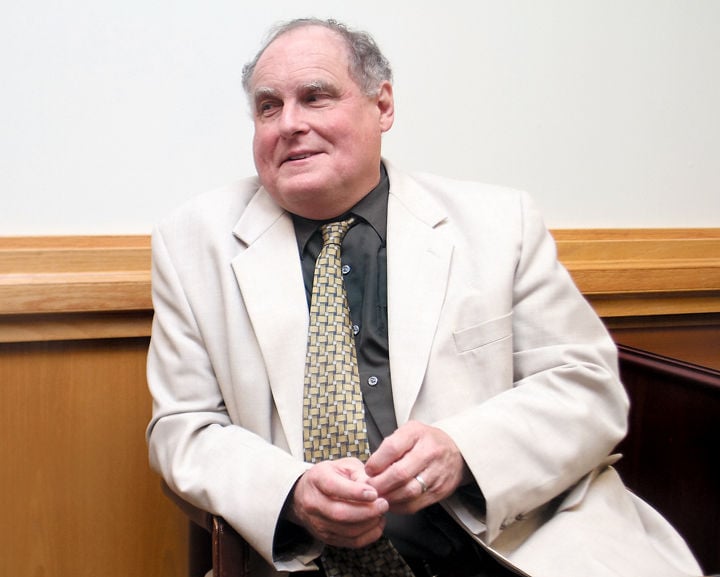 District 5 Public Defender Mack Garner sits in a courtroom at the Blount County Justice Center in mid-January as he discusses his work in the public defender’s office. Garner has been the District 5 public defender since 1990.

In this photo from July 16, Maryville defense attorney Rob White presents his closing arguments to a Blount County jury in the homicide retrial of Jimmy Lynn Rauhuff.

Rob White sits in his downtown Maryville office during a Jan. 28 interview where he discussed his work as a criminal defense attorney. White has practiced law in Blount County for 20 years and has been involved in several high-profile cases.

District 5 Public Defender Mack Garner sits in a courtroom at the Blount County Justice Center in mid-January as he discusses his work in the public defender’s office. Garner has been the District 5 public defender since 1990.

A man who is his own lawyer has a fool for a client.

Most people have heard the saying. At some point in their lifetime, many will find themselves in need of an attorney, even if only reluctantly or begrudgingly requiring their services.

This is perhaps never more true as in the event of criminal charges. And thanks to the public defender system, those who can’t afford representation don’t have to become foolish clients.

Those unable to hire an attorney in Blount County may find themselves being represented by District 5 Public Defender Mack Garner, or one of several attorneys in his office.

As Garner explained, Tennessee is special in that citizens have the opportunity to select their district public defenders.

“Tennessee is the only (state) I know of that has an elected public defender system,” Garner said. “In every other state there is a central public defender that’s either appointed by the legislature or named by the governor.”

In Tennessee, the citizens representing the 31 districts of the state elect public defenders every eight years, as they do with judges and district attorney generals.

Garner said he believes this is the best possible model, giving the people more power and ensuring more accountability.

“Because we are elected, we answer not to the governor, not to the legislature, but our constituents,” Garner said. “In this case, the people of Blount County.”

Garner, who’s always enjoyed practicing criminal law, said there are several reasons he prefers working for the state, instead of himself in private practice.

As a state employee, Garner not only has the opportunity to contribute to a 401(k), he receives insurance benefits and is part of a pension-type program.

“In private practice, you’re always worried about those things, because there is none,” Garner said.

He also has the opportunity to focus on one area of law.

“When you’re in private practice, especially in a small town, you never know what kind of case is going to walk in the door,” Garner said.

Many times, these cases require an attorney to study new or unfamiliar case law.

“It’s like a re-education,” Garner said. “Whereas with all the questions that come up in criminal law, (with) the common ones, we know the answers immediately because it’s what we do. And that’s one reason the public defender system can work so well, because we see these questions all the time ... we don’t have to worry about knowing all the law, just the parts that affect us.”

While able to focus on one area of law, Garner’s office is handling somewhere in the neighborhood of 4,500 cases a year.

It helps that he’s not in it alone. He has five additional attorneys, two part-time attorneys, two secretaries and one investigator working in his office, and they have solid working relationships with the judges and Blount County District Attorney General’s Office.

Still, such a large case load can lead to more chances for error, Garner said.

The state legislature has demanded a study to find if more judges, district attorney generals and public defenders are needed across the state. But one problem is that districts vary in how they keep up with cases.

If someone gets pulled over in Blount County and picks up three charges, it’s counted as one case. But some other counties would count it as three separate cases, Garner said.

“I don’t know if we’ll ever have a reliable study that shows the situation in all the counties,” Garner said. “The public defenders have been wrestling with case counting ever since our creation in the 1980s.”

Maryville attorney Rob White also enjoys practicing as a criminal defense attorney. But unlike Garner, White runs his own private practice. And, unlike many other firms, he’s the sole attorney in the building.

White, whose office is located on Ellis Avenue in downtown Maryville, has been practicing law in Blount County for 20 years.

He graduated from Heritage High School in 1987 and completed his undergraduate degree at the University of Tennessee in December 1991.

A graduate of the University of Memphis Law School — it was actually Memphis State when he graduated in 1995 — he returned to Blount County to practice law.

This is when he discovered his love for criminal defense. Like a lot of young lawyers, White started out working a large load of court-appointed cases.

“The more I did that, the more I seemed to enjoy it,” White said. “So I guess I sort of gravitated toward that.”

The 46-year-old defense attorney, who works an average of 55 to 60 hours a week, said he believes the most important part of his job is thorough investigative work. That includes talking to potential witnesses, and doing so as soon as possible.

“Preparing for a trial really starts on the front end,” White said. “Making sure you have all the information available that could be relevant to your case.”

The next step involves sitting down with his client, evaluating all they’ve learned and deciding if they should proceed to trial.

“The decision of whether you should go to trial or not is really, in a way, risk-analysis,” White said.

The process involves looking at likely outcomes and examining their chances at trial based on those outcomes. White said experience in the court system helps him advise his clients, but the final choice isn’t his own.

“Of course, it’s ultimately your client’s decision on how the case should proceed,” White said. “But certainly I give my opinion, and my advice.”

White has served as a defense attorney in several high-profile cases. The most recent involved the July 2014 homicide retrial of Jimmy Lynn Rauhuff, who was acquitted of second-degree homicide in the slaying of his neighbor, 65-year-old James Arthur Moser.

White also served as one of two defense attorneys in the last case in Blount County where the death penalty was sought. That case went to trial in 2000. The defendant, Arthur Copeland, was convicted of first-degree premeditated murder in the 1998 shooting of a Maryville man.

Copeland was sentenced to death, but his conviction was later overturned and he was granted a new trial.

In 2009, Copeland took a plea agreement and pleaded guilty to second-degree murder.

All in all, the work of a public defender is very similar to that of a private defense attorney, White said, and their goals are essentially the same.

“I have tremendous admiration for Mack (Garner),” White said. “He’s done a lot for this community for a number of years.”

In fact, when he was first starting out, White worked in the part-time employ of the District 5 Public Defender’s Office. He was still practicing in a private capacity, but was able to work part-time with Garner’s office as well.

White said he learned a lot from that experience. And though he’s come to know criminal defense as his own passion, that isn’t true for everyone in the profession.

“There’s so many types of avenues people can practice in and thrive at, and some really smart lawyers don’t ever want to do trial work,” White said. “I’m sort of the opposite. I wouldn’t be as content with something that didn’t require trial work.”

A criminal defense attorney’s job involves investing large amounts of time, work and continuous re-education. It’s not easy, and defense attorneys face several challenges. For instance, when it comes to financial and investigative resources, they’re at a considerable disadvantage compared to the state.

The good news is the criminal justice system helps balance the scales. White said one of the “great equalizers” is the right to a jury of your peers.

“One of the things we all need to appreciate is, regardless of what someone may be accused of doing — or the strength of proof against them — the process has to be protected, and everybody deserves a fair trial,” White said. “If everybody doesn’t receive a fair trial, and have their individual rights protected, then our process suffers, and we all suffer.”