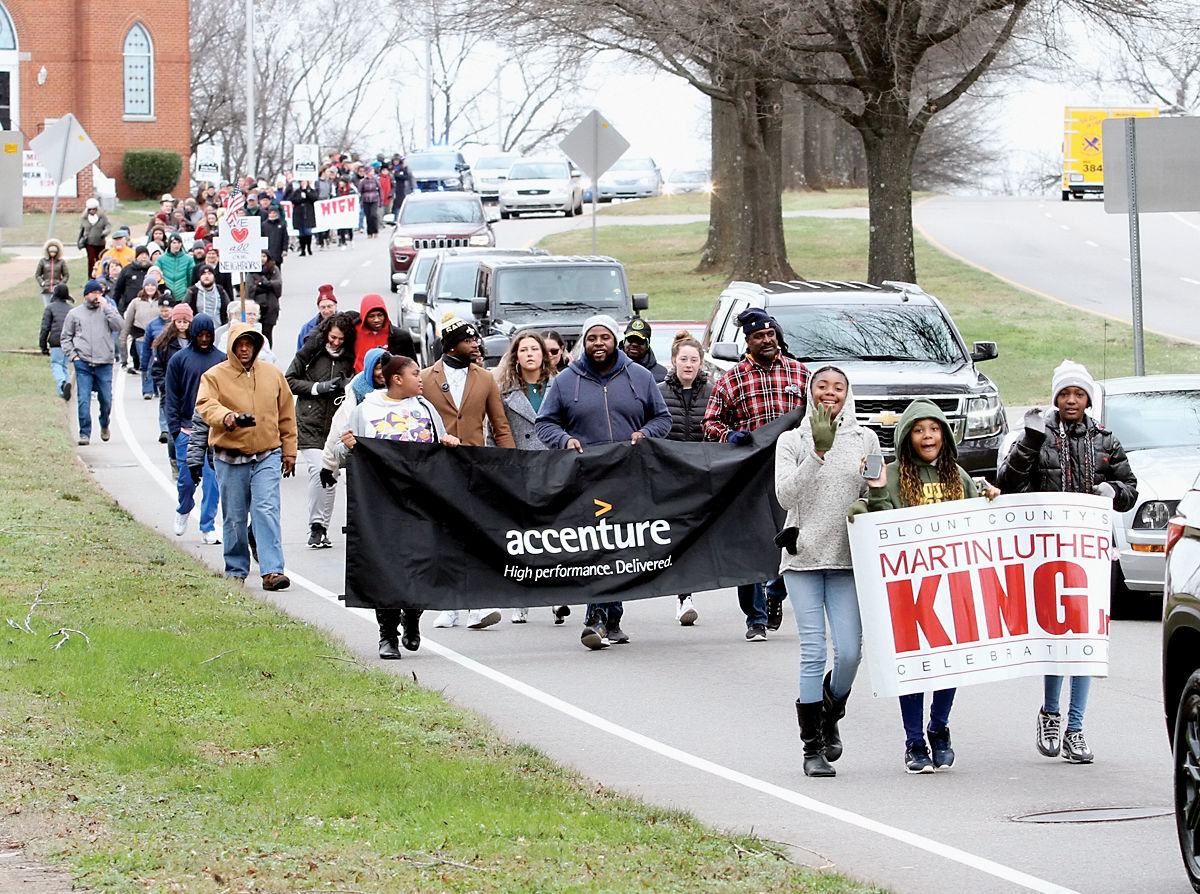 More than 100 people walk from the Martin Luther King Jr. Community Center in Alcoa to the Clayton Center for the Arts in Maryville for the 2020 MLK Day March and Celebration. 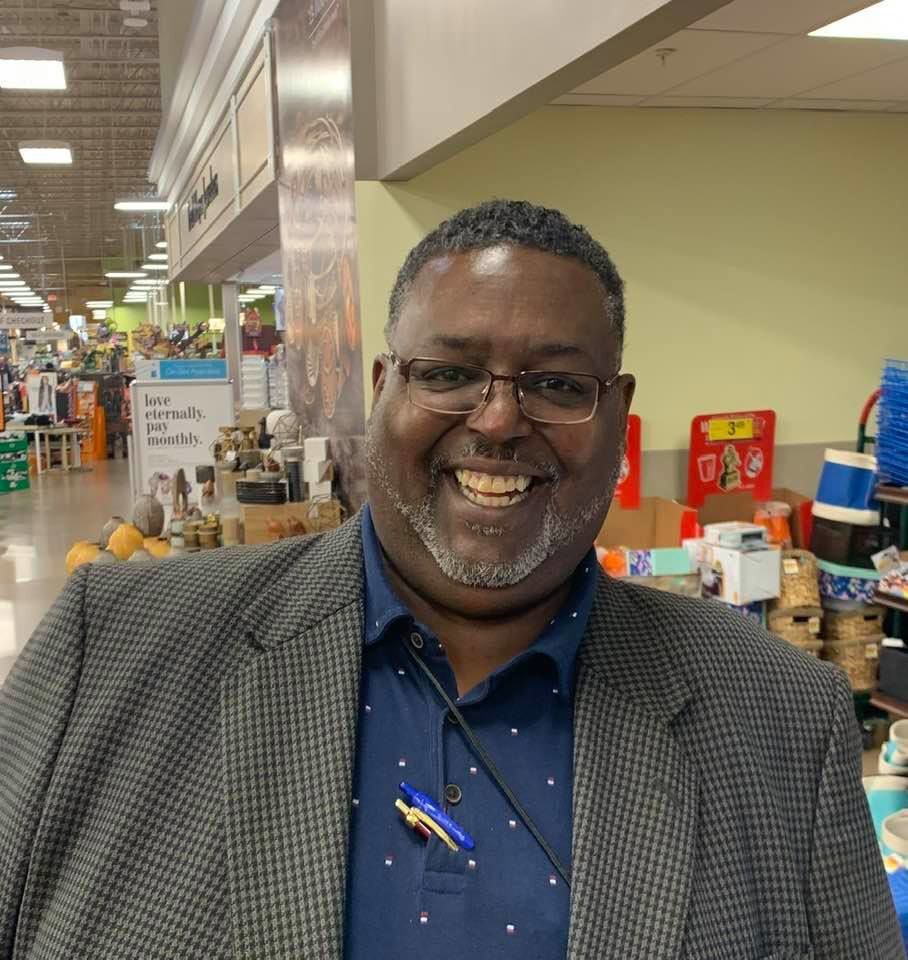 More than 100 people walk from the Martin Luther King Jr. Community Center in Alcoa to the Clayton Center for the Arts in Maryville for the 2020 MLK Day March and Celebration.

As a man of the cloth, the Rev. Peter Kenny and his family are well-known in the Blount County community.

He’s the pastor at Williamson Chapel United Methodist Church in the Lanier community, and on Sunday, he’ll be the guest speaker at a community worship service in Alcoa that’s part of this weekend’s Martin Luther King Jr. celebration. He and his wife, Belinda, have five sons, four of whom have grown up in Blount County. The oldest, Marcus, was a football standout at William Blount High School, named the Blount County Player of the Year during his senior season and going on to play for Maryville College before his U.S. Marines reserve unit was sent to Iraq in 2004.

The Kenny name, he told The Daily Times this week, is a good one. The color of their skin, however, means that their accomplishments, their positions and the name itself isn’t enough to overcome the racial bias that still exists in this community and America at large.

“I’m African American and have five sons, and if they were stopped by the police on a simple traffic citation, would they be treated differently than a young White kid or a younger White man? Absolutely, they would,” Kenny said. “I’ve even been stopped by white officers, and at the time I had one of the old ‘clergy’ stickers on the back of my car — and they still wanted to search it. The officer said to me, ‘I don’t know if you’re clergy. You could be trying to sell drugs.’

“So yes, (racism) is very much alive. Anyone who says otherwise needs to open their eyes. They need to take off the comfortable shoes that they’re wearing and maybe try on a pair of shoes that other individuals have walked in — ones that the heels are run over, that have holes in the bottom, and then walk across those a little bit of terrain filled with rocks, where the front of that shoe sole is peeling loose.

“Let them trip over that a couple of times and see how uncomfortable it is,” he added.

He doesn’t tell that story to paint a picture of overwhelming prejudice against the Black community, his family or even himself. The dream of equality enunciated so passionately and eloquently by King during the civil rights movement has been manifested in many ways, he pointed out. But any discussion of a post-racial America in which racism doesn’t exist is held among those who refuse to see it, he added.

The problem, he continued, is that many people see racism as a binary term, meaning that the absence of overt racism — epithets, outright discrimination, Klan marches down Broadway and other obvious manifestations of it — is proof to those individuals of its absence. Such thinking glosses over systemic racism that results in disproportionate poverty in the Black community, he said.

“For those people who say there’s no more racism, that it’s a thing of the past, I could take them down there to Knoxville, or even to a couple of places here in Maryville, and show them some people living in some very difficult conditions,” he said. “Now, they make excuses that those people are in that position because they want to be, and while there might be a few, I don’t agree with that in all cases.

“The problem is that they really don’t know how to get out. We live in a capitalistic society, and capitalists believe in profit. Now, I don’t have an issue with anybody making a profit. Profit is a good word, and profit is good for the American way, but sometimes what happens when people can make a profit is that they’re making it on the backs of individuals who sometimes end up on the short end of the stick.”

And when those individuals fall victim to generational poverty, compounded by communities ravaged by disenfranchisement and a lack of opportunity for young people, it creates a misconception that those individuals are unwilling to pull themselves up. Such opinions, Kenny said, gloss over the fact that ways to do so are limited, or worse, seem unattainable to those trapped in those cycles.

“We’ve got to teach them,” he said. “Those that can see, and those that know how to communicate in a different way, it’s our job to be able to share in such a way to where a person can learn, and sometimes that just takes patience. It’s not that these people don’t desire to be in that position — it’s just the way it is.

“They’re trapped in a system that they don’t know how to get out of, and somebody needs to give them a hand out — and by that, I mean physically reaching down and helping pull them up. That’s what Christ did: When he came to this earth, God sent him here to pull humanity out of the pit of sin, because humanity couldn’t get out on its own. Humanity kept sliding down the walls of a wet, damp pit because there was nothing to grab hold of.”

His message on Sunday, he added, will capitalize on that example. He has no interest in fire and brimstone — the theological kind, or the doom-and-gloom style of community activism that focuses more on the problems than potential solutions. King, he pointed out, was capable of calling out and lifting up, and while he wouldn’t put himself on any kind of equal pedestal, he does feel that King’s message deserves signal amplification now more than ever.

“Dr. King had a dream, and he shared his dream, and we still need to dream today — but we’re not just trying to duplicate his dream,” Kenny said. “Duplicating his dream is not going to be a bad thing, but we need to build on it. Young men need to see gentlemen 12 or 15 years older than they are who are successful, who are raising families, who have never been to prison and never used drugs and never been the victims of social injustice.

“Those numbers are far and few, but they need to have hope — and they need to have hope that those who have had those experiences have overcome those battles. That will also give them hope, and hope is the vision we need to see. Dr. King was a great servant leader, and I think he took his cue from the greatest servant leader of all, which was Christ himself. His calling and his focus in ministry was in helping those that suffered from different types of social injustice and making sure that the playing field is leveled, and that’s something we’re still working on.”

Steve Wildsmith was an editor and writer for The Daily Times for nearly 17 years and continues to freelance about news- and entertainment-related topics, local performances and East Tennessee artists. Contact him at stevedailytimes@gmail.com.

THEME: "We Still Have a Dream"

OPEN TO: All Blount County residents

TODAY (JAN. 14): MLK Business Luncheon at the Airport Hilton, featuring keynote speaker Dr. Bryan Coker, president of Maryville College. (This event is sold out but will be livestreamed.)

MONDAY: MLK Day March/Program begins with a 12:45 p.m. assembly at the MLK Center, 209 E. Franklin St. in Alcoa. The march to the Clayton Center for the Arts on the Maryville College campus begins at 1 p.m., with the program in the Clayton Center's Nutt Theatre beginning at 2 p.m. Keynote speaker: Cassius Cash, superintendent of the Great Smoky Mountains National Park.