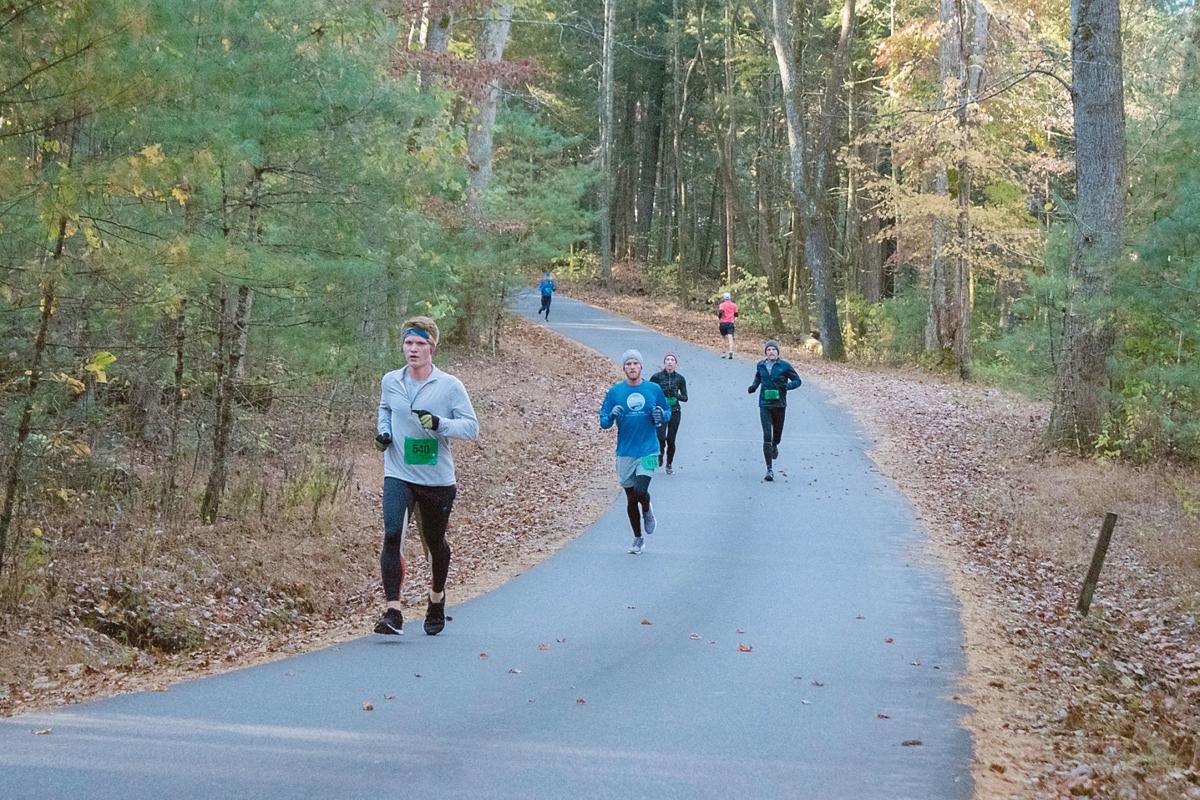 Runners in the Cades Cove Loop Lope are shown Nov. 3 in the third annual event that raised nearly $100,000. 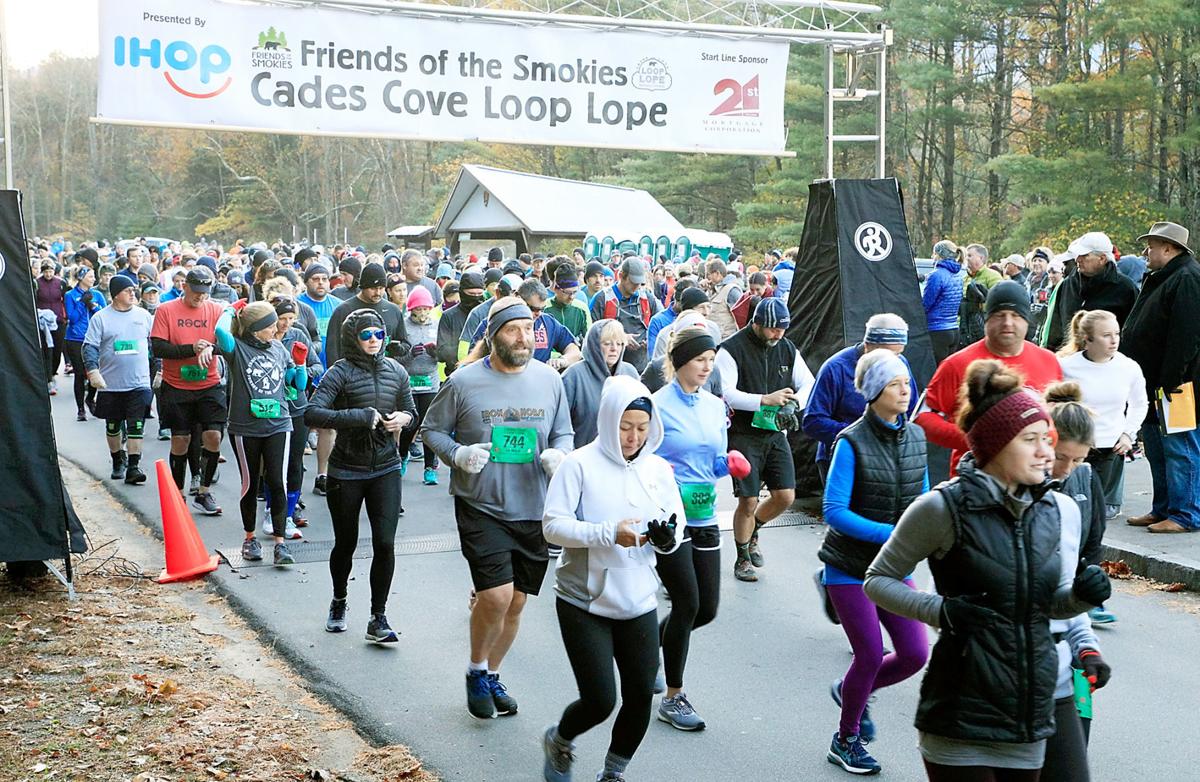 Runners begin the Cades Cove Loop Lope, a fundraising 5K and 10-mile run on Sunday that benefited the Friends of the Smokies’ efforts to support Great Smoky Mountains National Park.

Runners in the Cades Cove Loop Lope are shown Nov. 3 in the third annual event that raised nearly $100,000.

Runners begin the Cades Cove Loop Lope, a fundraising 5K and 10-mile run on Sunday that benefited the Friends of the Smokies’ efforts to support Great Smoky Mountains National Park.

Friends of the Smokies didn’t call it a run for the money, but they could have.

The initial estimate of funds raised at the third annual Cades Cove Loop Lope was a record-breaking $96,000.

After adding it all up, the actual final take from the footraces, a 5K and and a 10-mile, came so close to reaching six figures that Rudolph could have put it over the top by the length of his red nose.

As the only footrace allowed in Great Smoky Mountains National Park, it has grown in popularity as word has spread among runners seeking an experience beyond hoofing it on city streets. The event sold out weeks before the Nov. 3 event with 750 registered participants.

This was Tim Chandler’s first lope experience as executive director and COO of Friends after taking office in December. For him, the race was invigorating in more ways than one.

“I think one of the unique things about the race, other than the wonderful crisp mountain air that we’re running in, is that the race attracted people from so many states,” he said in a telephone interview.

Chandler met runners from Texas to Florida, from Ohio to Louisiana and all throughout the South.

“People drove in just to run in the race. My experience, being there as executive director, was the interaction with visitors at the national park who came to run a 10-mile race when the cove is closed, and the experience that gives them.”

Kathryn Hemphill, special projects director at Friends of the Smokies, said, “We’re thrilled so many people took advantage of this rare opportunity to experience the splendor of the cove and to help raise money to protect it for future generations.”

Even though the Sunday morning temperature was in the low 30s, Hemphill said in a news release, “Cades Cove did not disappoint. Race participants were treated to a beautiful sunrise and a quiet look at some of the most iconic scenery in the Smokies at the peak of the fall season.”

For runners who couldn’t be there Nov. 3 but wanted to support the park, a virtual race option was made available. Hemphill said this year’s race was a record-breaking success because of increased participation and support of area businesses.

The virtual race was added for runners who’d raced before but couldn’t make the 2019 event. They still wanted to support the Smokies, said Sarah Herron, who manages communications for Friends of the Smokies.

Plus, interest had reached the point where registration for the actual race had to be closed in late September when runners maxed out at 750.

This Loop Lope was the third annual event, but it actually follows in the footsteps a race held almost a decade ago. The initial event, held April 25, 2010, was planned as a one-and-done-race. It came about because after years of delayed maintenance, the Cades Cove Loop Road was finally scheduled to be resurfaced.

Rebuilt would be a more accurate characterization. The contract called for “full-depth reclamation.” The Loop Road had not been repaved for 30 years and was littered with potholes. Some sections were devoid of asphalt altogether — unless crumbles of pavement could be called asphalt.

Runners had for years lobbied for a Cades Cove race, but Smokies officials had declined on the grounds the popular cove was too busy with park visitors.

When the National Park Service and the Federal Highway Administration finally authorized the the $6.7 million repaving project, it seemed the stars were aligned.

Only one company bid on the challenging project, but Harrison Construction was up for it. Harrison, with a branch office in Alcoa and strong Blount County connections, was eager to take on what the company considered a signature piece of road construction. It sent department heads to Cades Cove early to get prep work started in winter even before required by the contract.

Knoxville Track Club support for the race and the guarantee that Friends of the Smokies would plow the proceeds back into the park sealed the deal.

Or so it seemed.

As The Daily Times reported, politics intervened. No one had counted on a lame-duck U.S. senator shutting down every federal road project. The morning that major roadwork started on Cades Cove Loop Road, the FHA called Harrison, ordering the company to stand down at noon. After some haggling, that roadblock was removed.

Years later, the question arose. Why not race again? In 2017 it happened, and the Cades Cove Loop Lope has grown more popular ever since.

Friends of the Smokies offers supporters of the park a variety of fundraising events throughout the year. Details about these events, as well information on how to volunteer, to make a donation and to become a member of Friends of the Smokies can be found online at friendsofthesmokies.org.