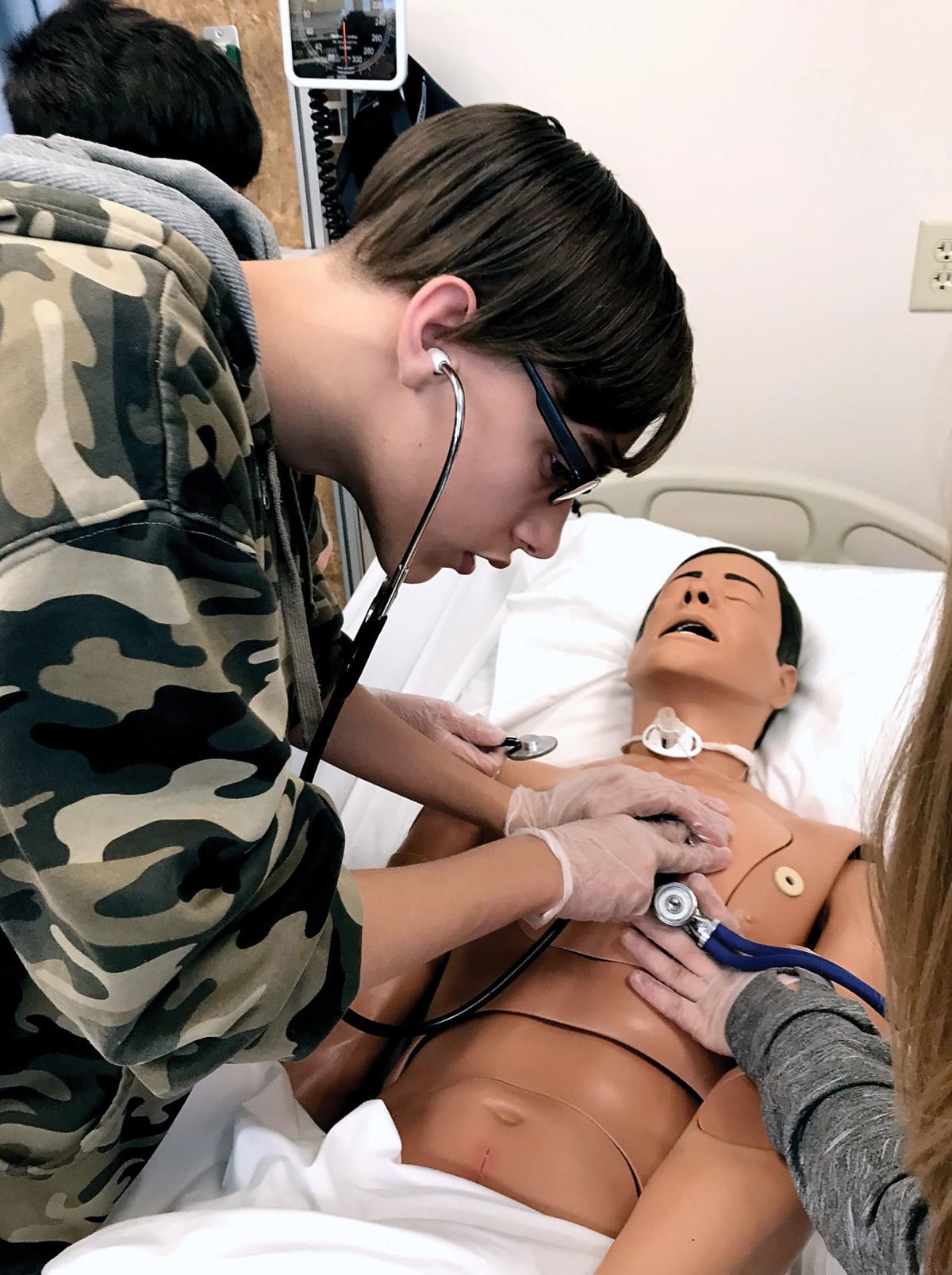 Jordan Haun participates in a career day for Carpenters Middle School students at Pellissippi State Community College in May. He’s now a freshman at William Blount High School. College visits are just one way CMS encourages students to think about their future education and careers. 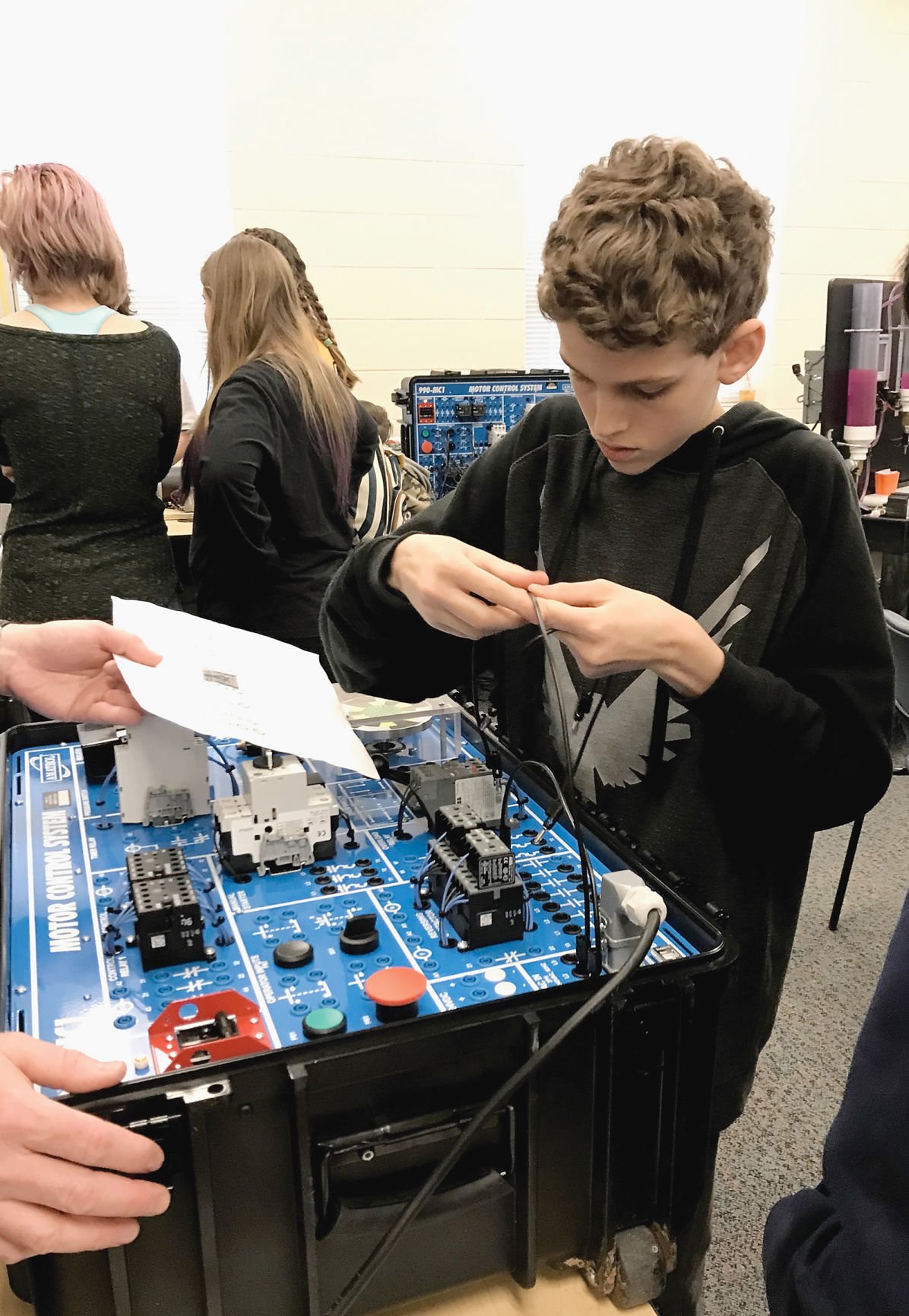 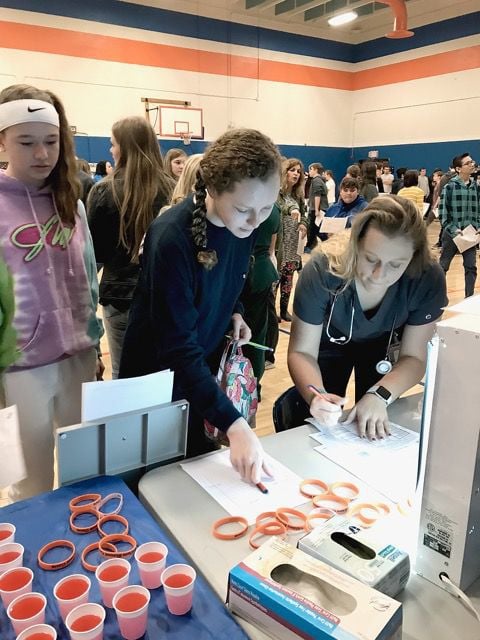 Abby Willocks and Lilyanne Tanner talk with a health science student at William Blount High School during a February visit to learn about the career and technical education programs available at the high school. 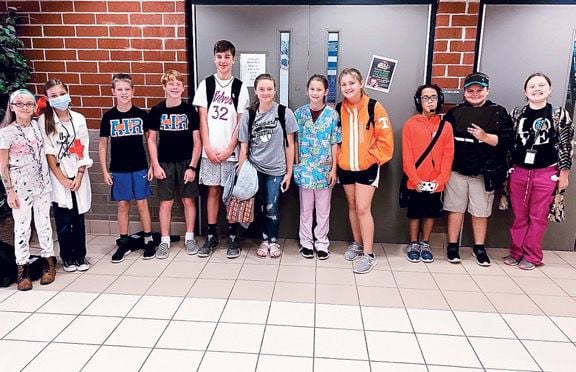 In this photo from 2018, Carpenters Middle School students dressed to represent their future careers. CMS earned the Path to College School Designation with its activities encouraging students to plan for their futures.

Jordan Haun participates in a career day for Carpenters Middle School students at Pellissippi State Community College in May. He’s now a freshman at William Blount High School. College visits are just one way CMS encourages students to think about their future education and careers.

Abby Willocks and Lilyanne Tanner talk with a health science student at William Blount High School during a February visit to learn about the career and technical education programs available at the high school.

In this photo from 2018, Carpenters Middle School students dressed to represent their future careers. CMS earned the Path to College School Designation with its activities encouraging students to plan for their futures.

Sixth graders may enter Carpenters Middle School with a child’s idea of what they want to be when they grow up, but they leave with six-year plans to lead them through high school to careers.

CMS was among more than 100 schools statewide and the only one in the county to receive the Path to College School Designation for the 2018-19 academic year from the Tennessee Higher Education Commission.

“It’s very important for kids to know what opportunities are out there for them and there’s not just one avenue for kids to attend,” CMS counselor Kelli Nehf said. “We’re just trying to educate students about the options.”

For about three years, Carpenters Middle has been working to give students not only an idea of future careers but also the career pathways they can begin in high school.

Schools from the elementary level up can earn the Path to College School Designation by hosting activities throughout the year related to: College Application and Exploration Week, TN FAFSA Frenzy, College and Career Planning, and College Signing Day.

Those dovetail with activities in the career explorations class that Melissa Crabtree teaches at Carpenters Middle.

Last fall CMS designated one week for students to dress for the steps in their future. On a Monday they wore a Carpenters Middle shirt, followed by a William Blount shirt on Tuesday. Wednesday was for college T-shirts, Thursday they dressed for a job interview and Friday for their future career.

“We had a huge amount of kids do it,” Nehf said, with the career outfits showing scientists, teachers, doctors and members of the military, along with athletes and others.

This year the principal read college trivia questions and the first home room to submit the right answer won a prize. Teachers also wore shirts from their alma maters.

While some high schools hold “FAFSA frenzy” nights for seniors to fill out the Free Application for Federal Student Aid, Carpenters Middle focused on educating students about the form used to determine many types of financial aid for postsecondary education.

“We let the the kids know what is a FAFSA, what will you and your parents need to complete a FAFSA,” Nehf said.

Students also learned about options such as the Tennessee Promise scholarship for community and technical colleges. Nehf wants students to know, “Money does not have to be a factor; there are ways to continue your education without breaking the bank.

“There’s not just one way to do it,” she continued, pointing to “bridge” programs between Pellissippi State Community College, the University of Tennessee and Maryville College. “They don’t have to go to one school only to become what they want to be.”

Starting in sixth grade, the Carpenters Middle students spend at least four weeks in Crabtree’s class on career exploration. By eighth grade they are spending nine weeks on the topic.

“Probably by the time they leave here they will have taken anywhere from 12 to 15 assessments that tell them what they might be good at depending on what they tell it,” Crabtree said.

When they begin middle school, she said, “They all think they’re going to be professional athletes, or they’re all going to be marine biologists, even though we live in Tennessee. They don’t want to move, but they want to do marine biology. They don’t have a really good grasp on reality at this age.”

Through the interest inventories, they discover, for example, that their problem-solving skills might be a good match for an engineering field.

“They really start to open up,” she said, through both the interest inventories and an online program called Virtual Job Shadow, which includes videos of people working in various careers.

“I require that they watch and do activities on careers they’ve never heard of, because so many of them don’t know what’s out there,” Crabtree said.

“This morning I had one ask me what an arborist was,” she said, and he looked up that career working with trees.

Many are not familiar with service careers, such as social work, or hospitality careers, although that’s important to the local economy.

“Our No. 1 employer is manufacturing,” she noted, but for an incoming middle school student that doesn’t sound like a “cool” or interesting career. “They don’t know what that is.”

Students develop career goals and plans for four years of high school and the first two years beyond. Even a professional athlete needs a plan, Crabtree noted.

“I don’t push four years of college for everybody, because that’s not what every job is going to require,” she said. “What I want them to do is figure out what they want to do and then figure out what will get them there.”

In eighth grade they attend the countywide career fair in late October, and most participate in some type of job-shadowing experience.

The rising freshman visit the high school in February to see the range of career and technical education programs available.

“If they don’t have an older brother or sister, they’re really fascinated when they see the CTE programs at the high school,” Nehf said. “They’re not aware that they have mechatronics and that they have robotics. They’re not aware of the STEM (science, technology, engineering and math) labs, and and they don’t know about the culinary arts. That’s a restaurant that’s open three days a week, and that they actually have a cosmetology business that operates at the high school.”

They go to Pellissippi State Community College and the Tennessee College of Applied Technology. When about 40 visited Maryville College, they spent time not only in classrooms but the dining hall, to see a more complete picture of the campus experience.

Crabtree and Nehf also hope to give groups of students opportunities to see different types of workplaces, from manufacturing to health care.

“Getting kids physically there to see it is important,” Crabtree said. “We can talk about it all day long, but for them to actually get there, that kind of opens their eyes to what it can be like.”

By eighth grade students are becoming really serious about their futures, Crabtree said, but they still need to learn how to navigate high school. Many don’t know what a credit or an elective is.

At the end of April students signed a banner signifying their commitment to continuing their education in some way. With their names they could write the school they plan to attend, branch of the military they want to join or simply their future career.

“I can’t wait to see how they continue to grow and what they become, because they had the knowledge early on, and hopefully that pushes them even further just to keep going for what they want to actually do,” Nehf said.