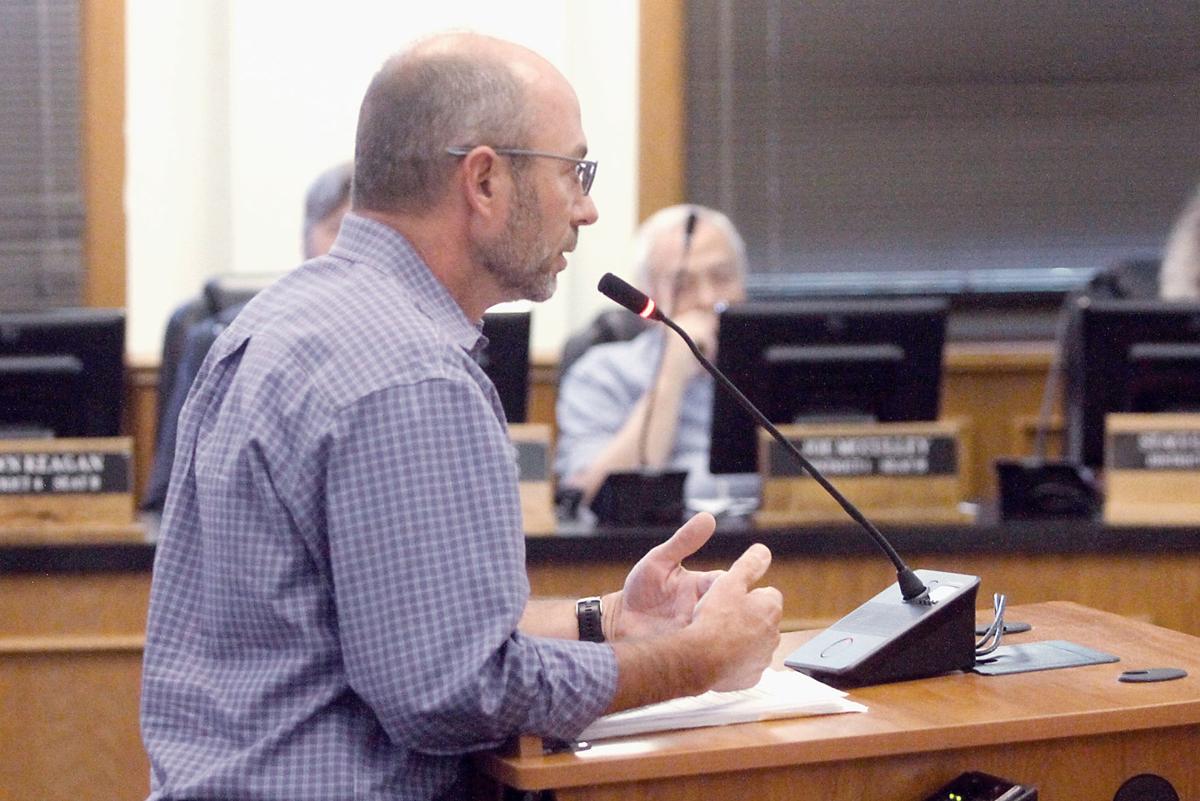 Roger Kiger comments on the building of the transition center Tuesday. 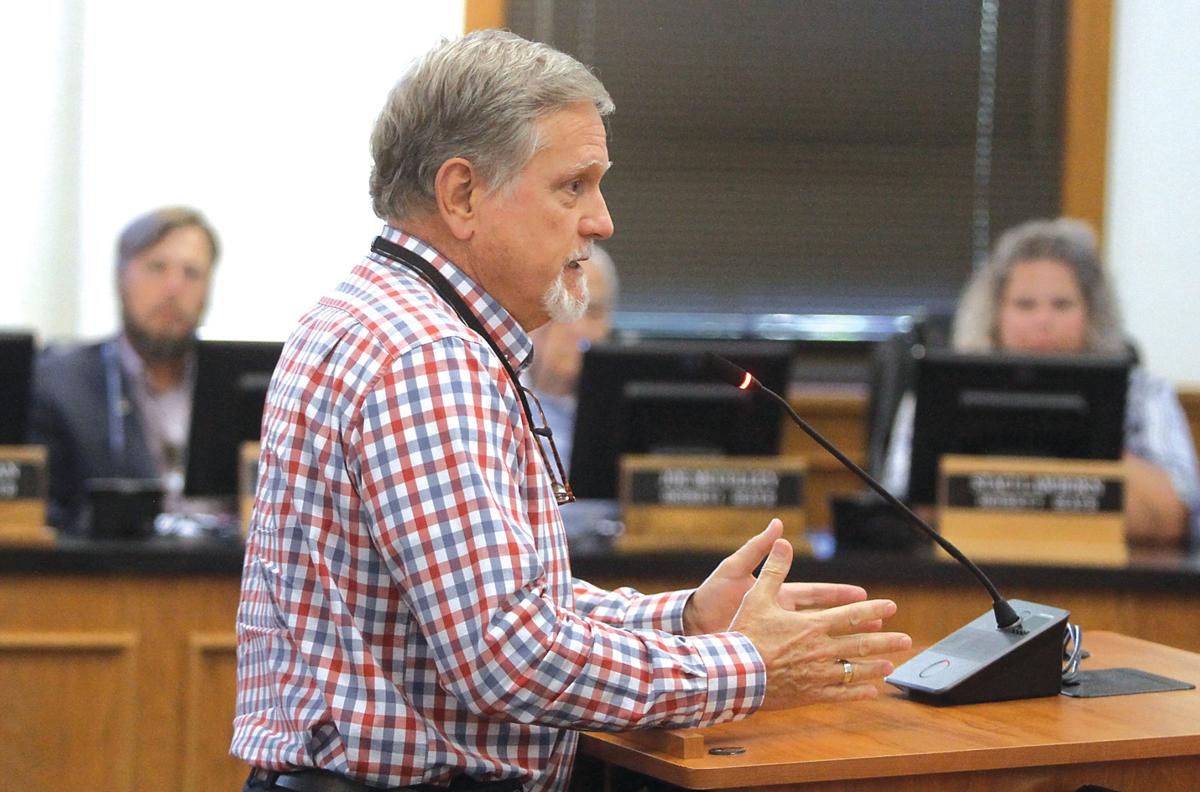 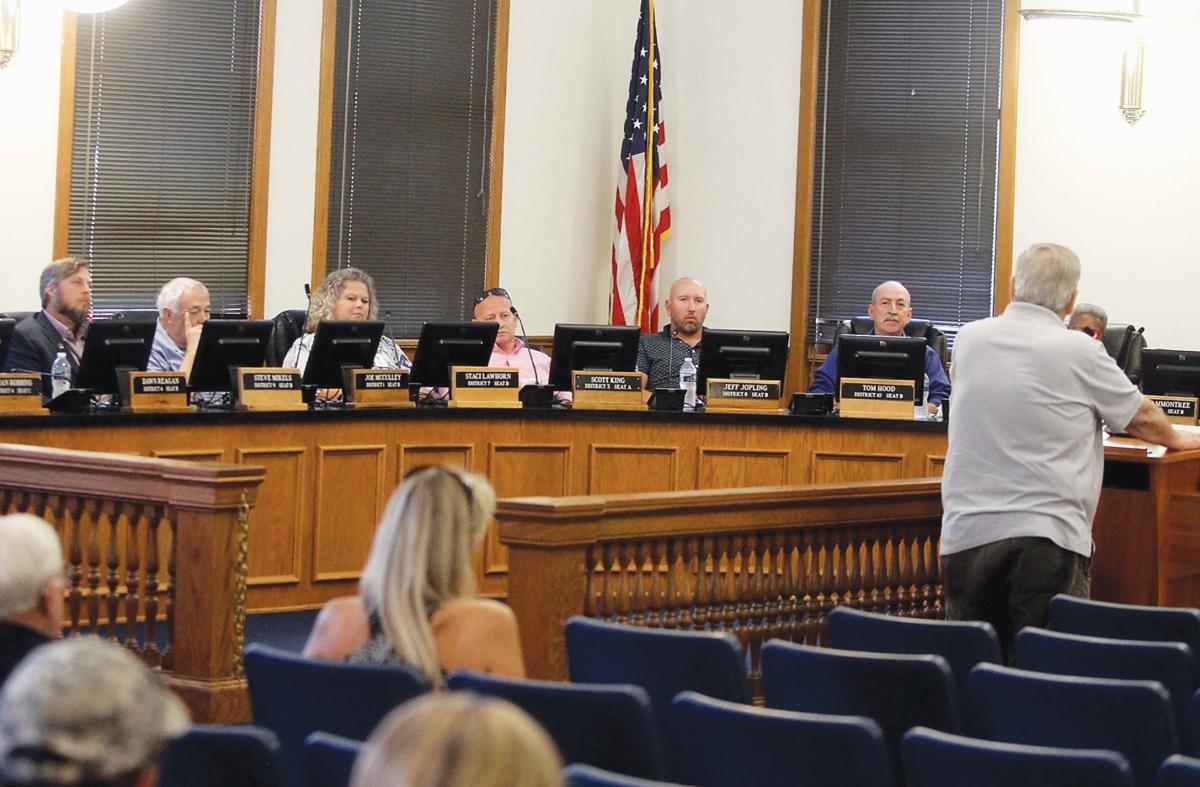 Commissioners listen to comments from the public on the building of a transition center on Tuesday.

Roger Kiger comments on the building of the transition center Tuesday.

Commissioners listen to comments from the public on the building of a transition center on Tuesday.

Driving to Russell Farm, the single-level houses often have animals sprawled across porches. A man in a plaid shirt sprays insecticide on a walkway. A riding lawn mower sits in the middle of one yard.

The houses are close together and the neighborhood is quiet. In a back corner sits a hilly, mostly empty plot of land — the property that soon will be home to Blount County’s transition center for nonviolent offenders to serve their sentences and reduce crowding of the county’s jail.

The Blount County Commission voted 12-7 late Tuesday to purchase the plot of land in the Bungalow community.

The purchase will cost $1,259,400. This amount will pay for property acquisition and associated costs, including for a road extension and analysis of bed and programming needs.

The meeting started with the commission hearing from the public. This was the first transition center meeting that the public was able to speak, other than a town hall meeting in July.

A woman who lives alone in the Bungalow community stood to speak. “We don’t need any druggies in that community at all,” she said.

Another man stood to speak of his support for the transition center. “I hope you vote your conscience and get this passed,” he said.

Also taking the podium was Roger Kiger, whose family owns property near the proposed land for the transition center. He proposed that the county pay the owners of Russell Farm to extend the prospective sale process from 60 to 90 days.

During that time, he suggested the county take the time to “gather estimates for site work and preliminary construction estimates.” After this time, he proposed that the county then make a decision about the property.

Some commissioners agreed with Kiger.

The first resolution on the table regarded whether or not the commission would adopt Mayor Ed Mitchell’s recommendation to buy the property.

This amendment was further amended by Commissioner Steve Mikels, who recommended that the proposal to extend the potential contract from 60 to 90 days be further extended to up to 180 days.

Commissioner Jackie Hill agreed that Kiger’s request should be acknowledged.

“I think we need to consider this proposal because it’s coming from someone in the community,” she said.

Eventually, the full commission voted on the resolution to adopt the mayor’s recommendation of the property by a 12-7 vote.

Two funding resolutions to buy the land were to be voted on following the first resolution.

Several commissioners spoke in opposition to spending taxpayer money for the purchase, asserting that a preliminary screening of the property had not been accomplished.

“We have to have factual evidence and factual estimates,” Mikels said. “I think it’s very irresponsible to be voting.”

The votes toward the appropriation were interrupted by Commissioner Akard, who motioned to adjourn the meeting early. This motion failed.

The second resolution of the evening was to increase the general administration capital fund and appropriate $1,240,000 to pay for property acquisition and associated costs, including funds for a road extension.

Akard motioned that the resolution be postponed until another meeting. The motion failed.

The third and final resolution was to increase the general administration capital fund to appropriate $19,800 to assess needs for jail beds and programming area. This resolution passed 15-4 with little discussion.

This committee was charged with two tasks. The first was to develop and maintain plans to correct the crowded conditions of the jail.

The second was to develop a plan for a transition center in Blount County.

Nearly a year after the committee was formed, the first step in establishing a transition center was taken.

After months of viewing and reviewing 26 properties, County Mayor Ed Mitchell gave a presentation to the CARES committee.

In the July 16 presentation, Mitchell proposed that Russell Farm, a property off of Wooddale Street in the Bungalow neighborhood.

Many people living in the Bungalow neighborhood oppose a transition center being built in their backyards. Some attended a July 22 town hall meeting and raised their concerns.

“Is there another place that’s not right next to our home?” One asked.

The mayor and CARES Committee have remained committed to the property, claiming that it was the best of the 26.

The committee chosen by the mayor and headed up by Charles Sterling, project manager for the Community Justice Initiative, rated each property they viewed on a scale of one to 10. The properties were rated based upon six factors: their location, size, access, value, utilities, proximity to employment, transportation and possible availability.

The Russell Farm property surpassed all other options with an 8.5 rating.

The mayor and his committee are not the only people who are pleased with the property chosen. Many spoke their approval of the property and the large idea of a transition center at the town hall meeting.

“There is no data that it would lead to an increase in crime and decrease in property value,” said Zac Talbott, Director of Clinical Services at ReVita Recovery Centers, LLC, at the town hall meeting.

The transition center would house non-violent offenders who struggle with drug addiction or mental health issues. The center would offer these inmates employment opportunities, educational classes and rehabilitation programs.

Similar centers across the state have reaped huge benefits and seen tremendous results. One of the centers that the mayor and Sterling viewed when considering was the Davidson County Drug Court Residential Program (DC4).

Now, with Tuesday’s vote having passed, Blount County will move to purchase land to build a comparable transition center—one that would fight the county’s growing jail crowding issue and help those struggling with addiction and mental illness get the help they need.

Visit thedailytimes.com to read expanded coverage of the commission meeting.