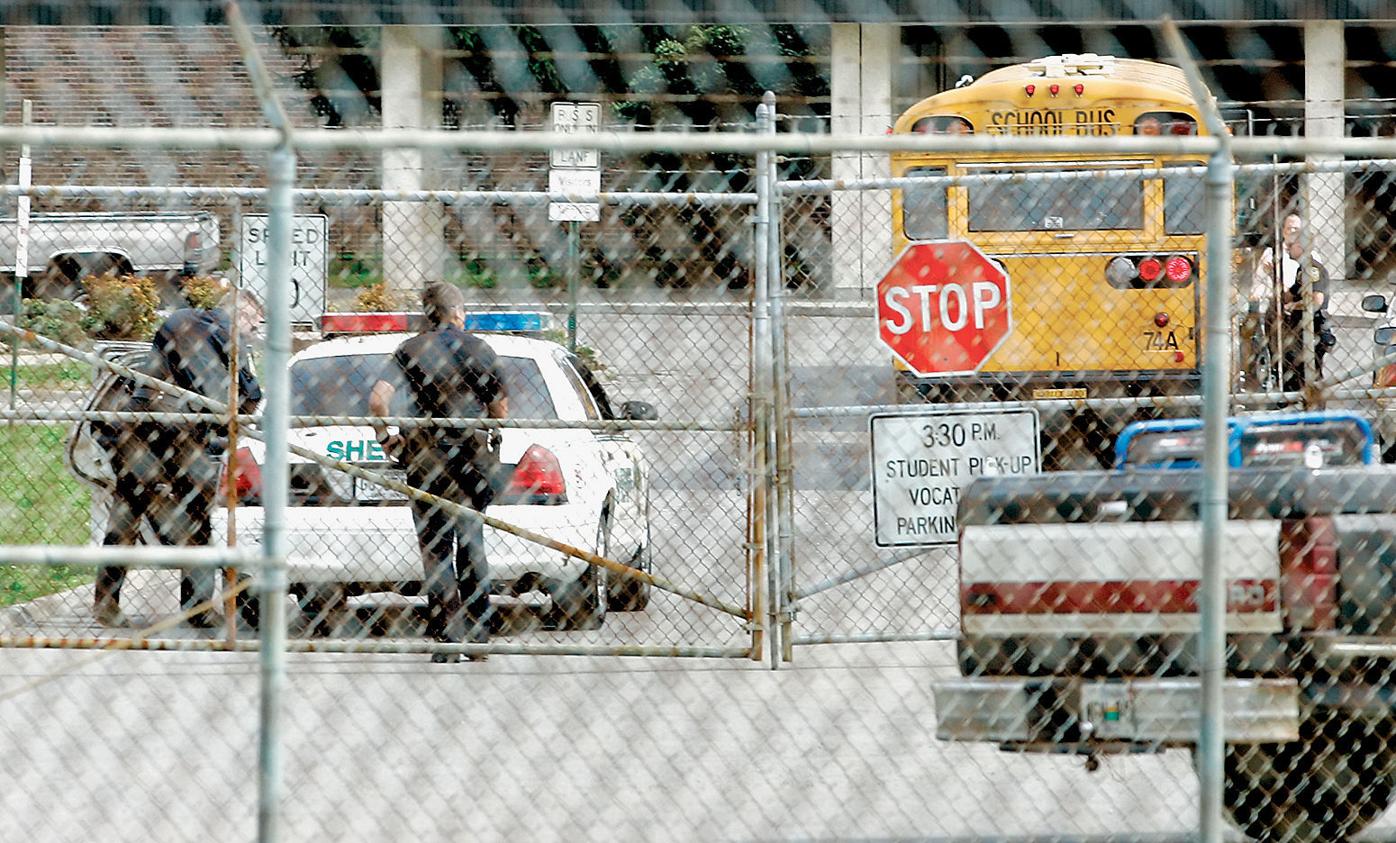 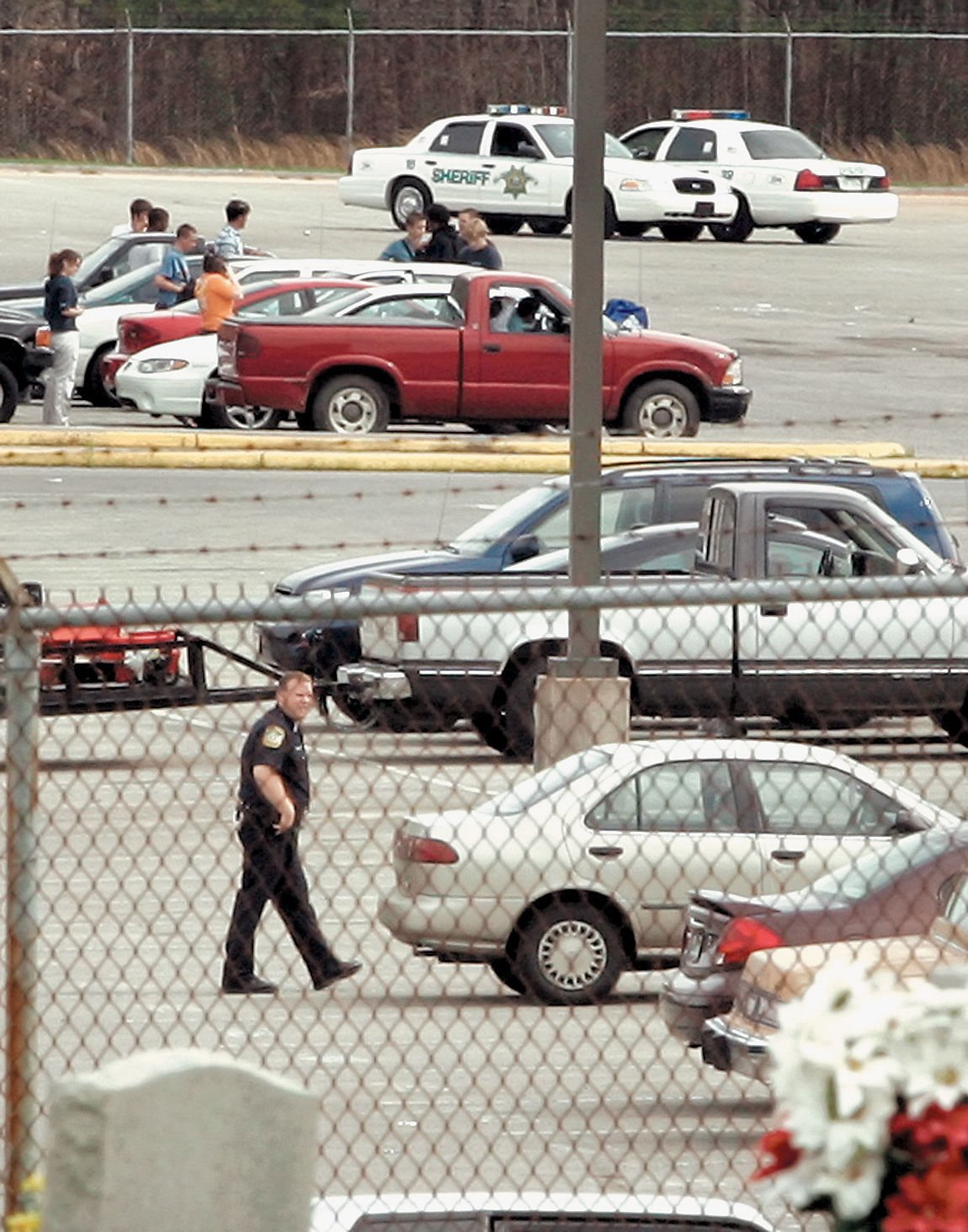 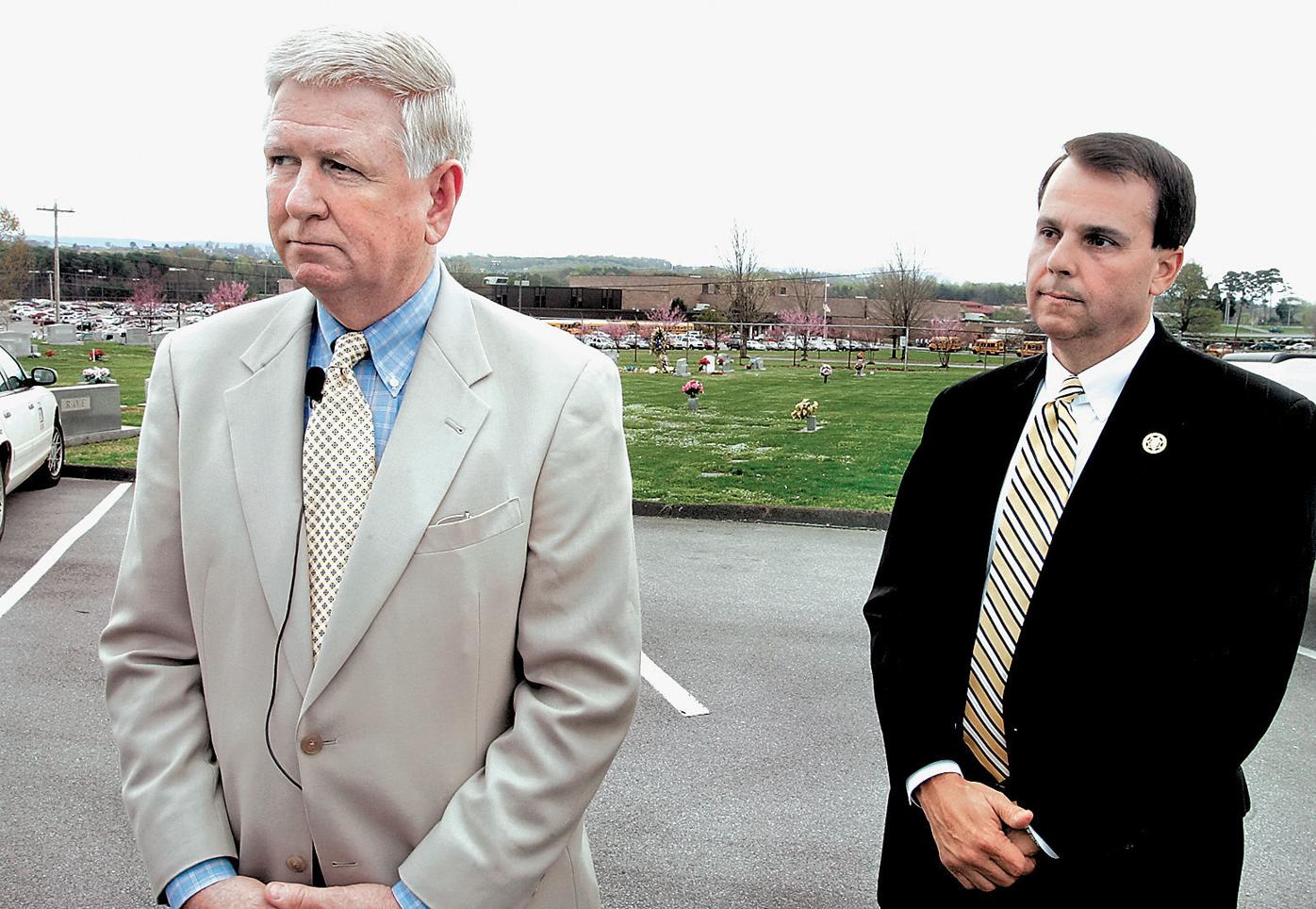 Then-Blount County Director of Schools Alvin Hord (left) and Blount County Sheriff James Berrong talk to the media outside William Blount High School on April 6, 2005. BCSO assisted the school district in its lockdown of the school. 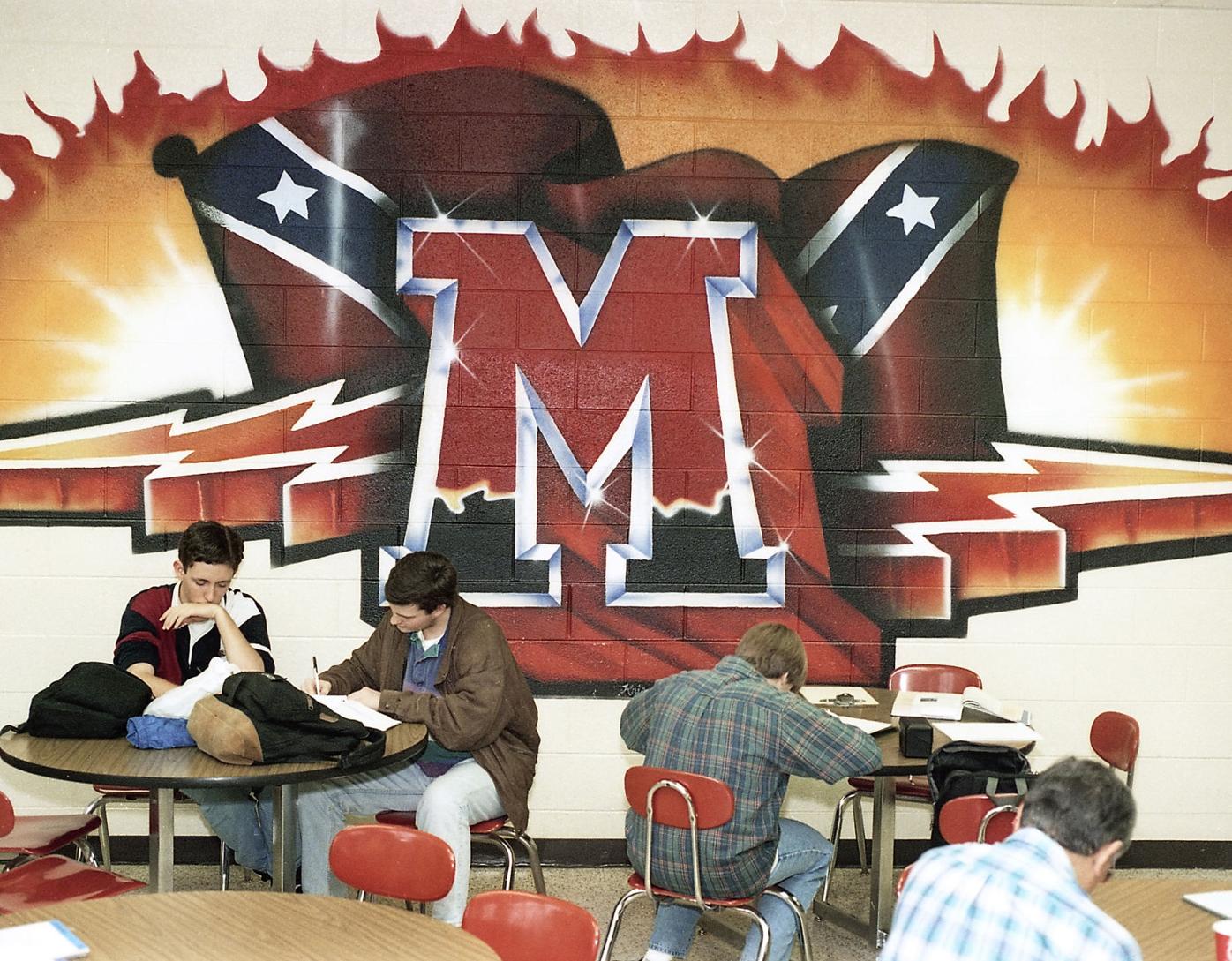 Maryville High School’s cafeteria had a mural that depicted the Confederate flag as seen in this file photo from January 30, 1996. The mural was torn down as part of a construction project in summer 2000.

Then-Blount County Director of Schools Alvin Hord (left) and Blount County Sheriff James Berrong talk to the media outside William Blount High School on April 6, 2005. BCSO assisted the school district in its lockdown of the school.

Maryville High School’s cafeteria had a mural that depicted the Confederate flag as seen in this file photo from January 30, 1996. The mural was torn down as part of a construction project in summer 2000.

While numerous states are dealing with public displays of the Confederate flag, Blount County’s schools crossed that bridge more than 10 years ago.

The county’s three districts prohibit clothes and other items that feature divisive symbols. Each district’s policy empowers principals to address attire that is likely to cause disruption or interference with the operation of a school.

“Alcoa City Schools is determined to provide a safe, civil and supportive environment for students to learn and achieve high standards,” said Alcoa Director of Schools Brian Bell. “Divisive symbols of any kind will not be tolerated.”

“Blount County Schools has a strong policy and practice against divisive symbols in our schools,” said Blount Director of Schools Rob Britt. “We seek to create a safe climate and environment for all students, and we believe that we have an effective policy in place.”

“The Confederate battle flag is not endorsed by Maryville City Schools or Maryville High School and does not appear on campus or in print as part of any branding, signage, team uniforms or official promotional materials,” said Sharon Anglim, Maryville’s director of communications. “Flagpoles are banned from Shields Stadium. Our ‘Power M’ has become the trademark for most student organizations and event branding — a symbol commonly associated with Maryville High School in this community.”

Maryville High School hasn’t always been the Rebels. It was known by at least three different names — Red Elephants, Crimson Whirlwind, and The Red and Black — prior to 1936 when the school became known as the Rebels in response to sanctions brought against the football program.

Maryville High was suspended in 1935 from playing any teams in Tennessee as a result of using two “illegal” players in the previous season, according to an Aug. 27, 2004, story. Its current name is attributed to a comment made by then-Coach Dean Bailey, who said his team was a bunch of rebels against the Tennessee Secondary School Athletic Association.

“It was several decades before people began to mistakingly identify the Rebels with the Confederal battle flag,” said Oliver “Buzz” Thomas, who served at that time as the board’s chairman, in a May 18, 1999 article. “We’re not the Confederate Rebels. We’re the Maryville Rebels.”

In the late 1990s, Maryville High School became embroiled in controversy surrounding the Confederate flag. Community members and students started to question its usage at school functions and on school materials.

In 1996, a task force was established to explore diversity issues after a petition was circulated among Maryville High School students who wanted to remove the Confederate battle flag from a cafeteria mural. More than 100 students signed the petition.

Task force members recommended phasing out Confederate flags from school materials. In the past, the flags had been depicted on class rings and yearbooks.

In early 1999, Dr. Jeffrey Whitlow filed a complaint with the U.S. Department of Education’s Office for Civil Rights. The black physician’s complaint originated from a football game between Maryville High and William Blount High during which Confederate flags were waved by fans of the Red Rebels.

The OCR agreed Feb. 5, 1999, to postpone its investigation after the Maryville Board of Education agreed to conduct its own investigation into the matter. The board scheduled a “listening session” for March 23, 1999, and solicited written comments from community members.

In the following weeks, the issue engaged national groups and stirred up local emotions. The Sons of Confederate Veterans bought advertising in The Daily Times, promoting the right to display the flag as “an honorable symbol of a Southern Homeland.”

In a story published March 23, 1999, a National Association for the Advancement of Colored People spokesperson said the flag was “offensive to the minority students and parents.” He explained that “some incidents may seem trivial to others, but to millions of African-Americans who have suffered and continue to suffer from the pangs of racial discrimination, it is a very vivid remembrance of a time in our history when lynching was done on a regular basis, when we were not considered whole human beings, when you could be beaten to death for merely expressing a desire to be free.”

The Daily Times also opened a phone line to hear readers’ thoughts about a ban on the flag. Of the 189 people who called the line, 177 callers were opposed to a ban and 12 supported it.

The board’s “listening session,” which lasted more than 2 1/2 hours, drew an overflow crowd estimated at 500 people, according to a March 24, 1999, story. Some audience members donned clothing with the Confederate flag, but the forum was apparently incident-free.

The story reports that public input “fell primarily, although not exclusively, along racial lines.” One student, Brandon Ward, asked the board to allow a group of parents and students to come up with a solution.

Thomas told The Daily Times in a March 25, 1999, article that “our students may find a way to help us through this problem, perhaps by designing a flag that we can all rally behind.” The board later adopted a policy to design a new flag, reiterating in this policy that “the Confederate flag is not a symbol of Maryville High School.”

Board members also approved a memorandum of understanding that the flag be removed from cafeteria wall and trays. It also:

• instructed the Red Rebel Marching Band to not display the flag or play “Dixie” at athletic events;

• prohibited the incorporation of the flag on to any letter jacket, publications, school uniform and official school items;

• prohibited the sales of materials depicting the flag in the school bookstore;

• and requested that teachers not display the flag in classrooms or on their persons.

Following this meeting, Maryville High students designed new school flags. It selected a school flag with the word “Rebels” outlined in white in the center on a black background.

In October 2002, Thomas submitted a letter to the editor that detailed his experience at a football game in which there was a “student section full of rebel flags.” The attorney advised that Maryville High shouldn’t “wait until the next civil rights complaint is filed” to act, suggesting that the district could re-educate students about “the reasons they should leave their Confederate battle flags at home” or “simply ban the presence of all flags and flag poles in the stands”

In August 2005, the school board decided to do the latter. It banned all flags, handheld signs, laser pointers, noisemakers, sirens and whistles at home games.

Maryville High isn’t the only school in Blount County to deal with the Confederate flag, though.

In the fall of 1998, Heritage High School was the site of a racially motivated attack when two white students attacked black students with large sticks. The attack stemmed from a disagreement that occurred the previous day between one black and one white student. The white student and an accomplice attacked some friends of the black student.

All black students were allowed to leave school for the rest of the day, according to an April 17, 2005, story. School officials later talked with students and their parents to determine whether they had been harassed in the past.

The OCR also investigated the incident and provided staff with the assistance to deal with the situation. Then-Principal Ben Dalton also met with NAACP representatives.

As a result of these meetings, Heritage High banned all symbols — including the Confederate flag — that concerned black students. Officials also asked Maryville High to impress upon its students not to bring the flag on to campus.

William Blount High School followed suit and instituted its own ban on any form of the flag. However, it wasn’t enforced for several years.

In April 2005, William Blount High School reinstituted its ban following a rash of racially motivated actions that were detailed in a September 2008 trial held in U.S. District Court. Attorney Michael Shipwash outlined a list of incidents that occurred during the 2004-05 school year:

• a fight between three Caucasian students and three black students in December 2004;

• an incident in which a white student allegedly tried to run over a black student;

• and a school lockdown on April 6, 2005 after a student threatened to shoot several classmates.

In January 2006, a group of students challenged the ban and circulated a Knoxville newspaper’s ad, which was taken out by the Sons of Confederate Veterans, that referenced an appeals court decision in favor of students’ rights. Then-Principal Steve Lafon confiscated the newspaper and instructed them to turn their shirts inside out to hide the flag. No students were suspended.

Three students later sued Lafon, then-Superintendent Alvin Hord and the Blount County Board of Education. The U.S. District Court in Knoxville granted summary judgment in favor of school officials in March 2007, and the 6th U.S. Circuit Court of Appeals in Cincinnati upheld this decision in August 2008.

In its opinion, the appellate court ruled that school officials had a right to ban the flag because they could “reasonably forecast” that it would “substantially and materially disrupt the school environment.” It further concluded that “the dress code’s ban on racially divisive symbols, as enforced against the Confederate flag, is narrowly tailored to a substantial government interest.”

In October 2009, the U.S. Supreme Court refused to hear a petition from the students. In doing so, it affirmed the lower courts’ decisions and set a legal precedent for implementing school policy.