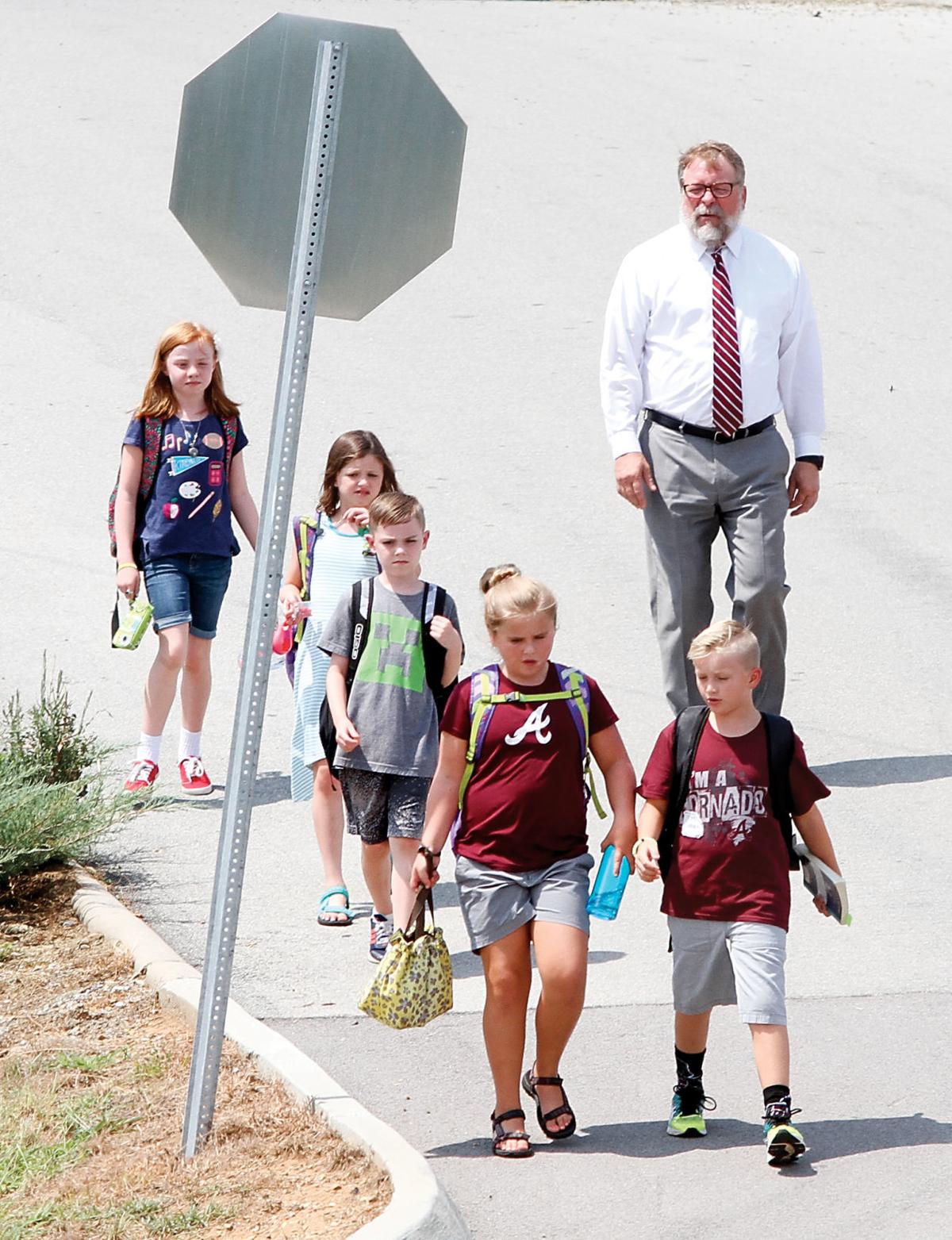 Director Brian Bell leads Alcoa High School teachers’ children from Alcoa Intermediate School to the high school on the first day of classes in 2017. Bell walked students across the campus most school days for several years. 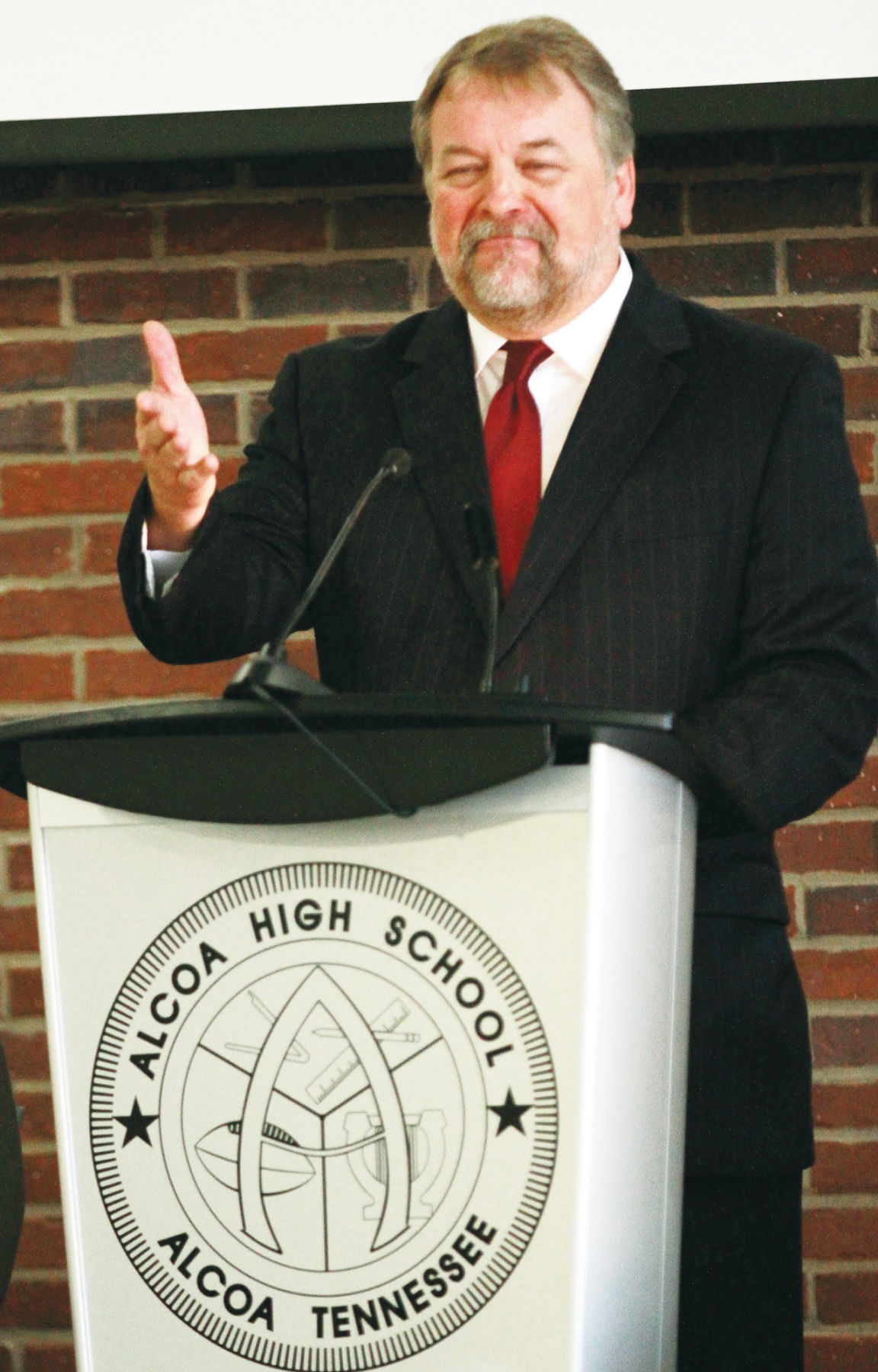 Alcoa Director of Schools Brian Bell welcomes guests to the first Alumni Recognition and Legacy of Excellence Gala, which was held in 2015 at Alcoa High School. 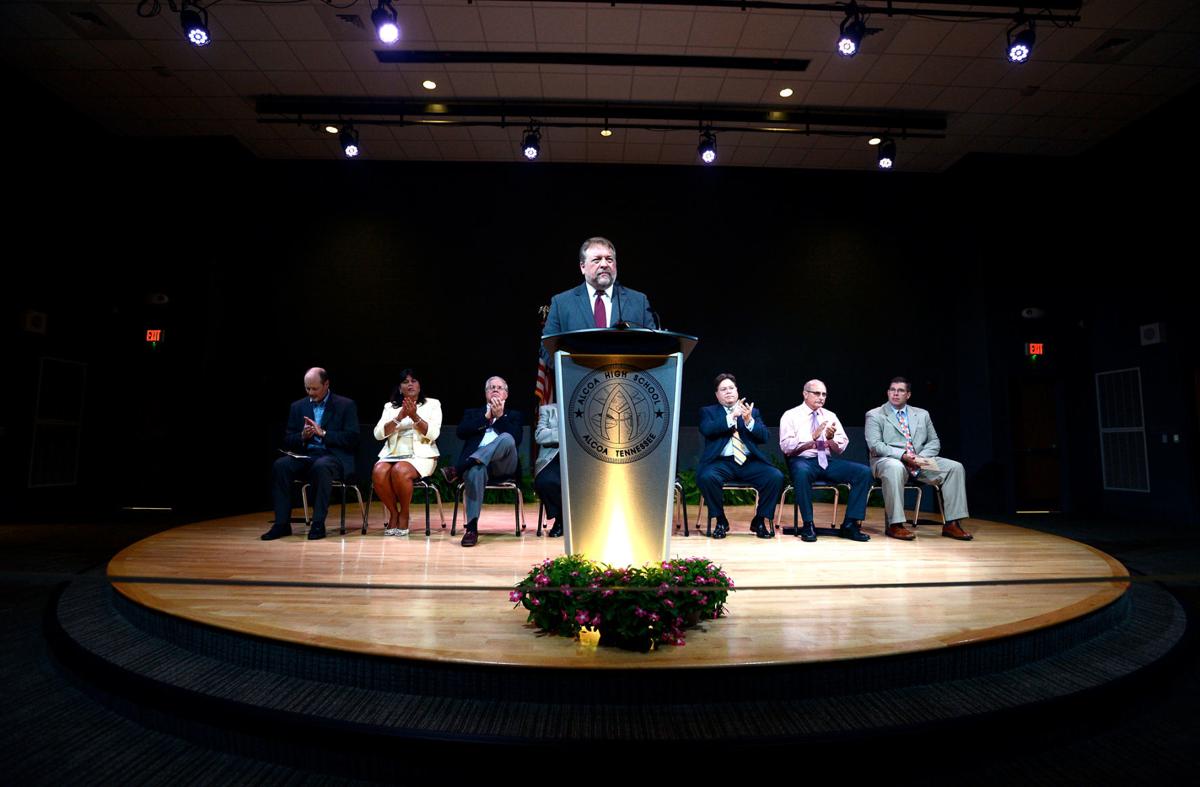 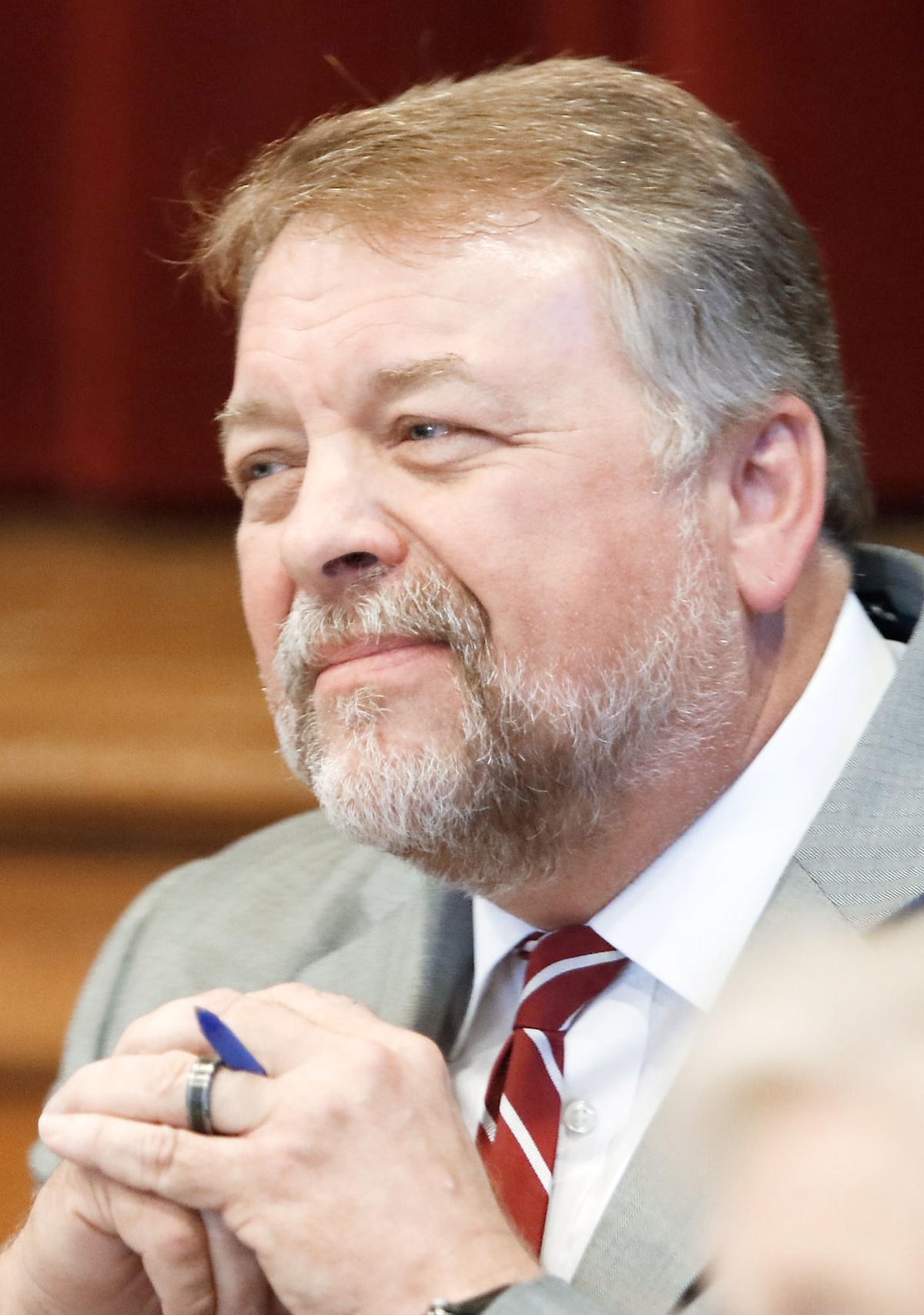 Brian Bell, director of Alcoa City Schools, listens to comments from teachers praising his leadership during a school board meeting in September 2016, during which his contract was extended to 2020. Bell announced last spring that this would be his last year as Alcoa’s director, although he will still teach at Lincoln Memorial University.

Director Brian Bell leads Alcoa High School teachers’ children from Alcoa Intermediate School to the high school on the first day of classes in 2017. Bell walked students across the campus most school days for several years.

Alcoa Director of Schools Brian Bell welcomes guests to the first Alumni Recognition and Legacy of Excellence Gala, which was held in 2015 at Alcoa High School.

Brian Bell will continue to be a full-time educator, teaching at Lincoln Memorial University, but this month he completed his term as director of Alcoa City Schools.

“It was just time to go,” he said in an interview last week, days after he officially left office.

“I always tell my administrators their job as educational leaders is to push and question the status quo,” Bell said. “After nine years, the status quo that I was pushing against was my own stuff.”

The son of a teacher and administrator, Bell said he always wanted to be a director of schools.

“My mom was a longtime elementary teacher that nobody really wanted to have, until they got into her class, and then they loved her,” he said with a smile. “She was mean and strict, and they loved everything about her.”

Bell’s father was a high school football coach, principal and director of schools.

“I always wanted to see students succeed, and I liked the educational atmosphere,” the son explained of his career choice. His plan was to spend at least 10 years in the classroom and then move into administration, a place where he believed he could help more people.

“I always thought that I knew the way things should operate. Now, whether I did or not, I’m not sure yet,” he said. “I think I was partially successful.”

Bell began his career as a middle school teacher in Salt Lake City, Utah. “Middle school kids are easy to love, but they can frustrate the dickens out of you,” he said, explaining students at that age need a lot of support.

He went on to teach high school English and history, and a family move brought him to Blount County Schools in 1990.

After working in two of Blount County’s three school systems, Bell often shared this observation in public speeches and private remarks: “If you’re a child and you’re fortunate enough to be born in Blount County or move into Blount County during your educational years, you are luckier than most in the state of Tennessee, because Blount County, Alcoa and Maryville are all exceptional school systems.”

“There’s a good bit of healthy competition between all three school systems,” Bell said, as well as collaboration, from setting school calendars to lobbying the state legislature.

Bell’s move from the classroom came in 1997 as an interim administrator working at Middlesettlements, Rockford and Fairview, his first time in elementary school since student teaching in Montana.

His first role in the Central Office came that same school year, overseeing plans for a technology grant. From there he filled a variety of roles, from being the chief negotiator for the school board to facilities management. He served as assistant director in BCS for two years before the Alcoa job opened.

When the football team didn’t make it to the championship game his first year as director, Bell said he thought they might not keep him.

When Britt would call him and ask how he was doing, Bell always would reply, “’I’m doing the best job I possibly can for the kids of Alcoa City Schools — and he meant it,” Britt said, praising his colleague as doing a “fantastic” job.

During the Alcoa job interview, Bell told school board members he wanted the district to be No. 1, and today he said it is in a number of ways, “obviously athletics.”

For a while it was first in the state in total teacher compensation, he said, although one of his regrets is that compensation has slipped.

He focuses on culture. “I don’t think there’s a better climate that you can work in than Alcoa City Schools. It’s a big family. And just like any family there’s disagreements and there’s fights, but at the end of the day everybody at Alcoa is a Tornado. Everybody’s fighting for the best interest of their students.”

By the end of his first year, he was a Tornado, too.

“Alcoa really loves their family atmosphere. They love their small-school feel, and they want to preserve that,” Bell said, noting that is a challenge with both school finance and growth in the area.

“If you’re not growing students, you’re losing money,” he said, and with lower grades reaching capacity, tuition students at the high school are part of self-preservation. “Financially we need it,” he said.

Another strength he sees in Alcoa is the diversity of the student population. “They get that life lesson from kindergarten through graduation,” Bell said.

Hiring one Black teacher was noteworthy during his final school board work session this month. For three-quarters of the openings, Bell said, Alcoa receives no minority applicants, and virtually all ACS has hired have come from neighboring districts.

“Where I dropped the ball is I didn’t really develop any strategies to recruit more minorities into the area,” he said.

Despite that and a few other difficulties during his tenure, Bell said during his last school board meeting, “The memories I take away from Alcoa City Schools are all good.”

Looking at his time as director, Bell points to the staff he’s put in place and the growth of Alcoa’s career and technical education programs, now with health science, marketing, mechatronics and — starting in the new school year — heating, ventilation and air conditioning repair.

At one time, he said, “Our top CTE event was Friday cookie sales.” Now students have a range of opportunities for real-world work.

Providing a computer for every student through AlcoaConnects was “a giant leap forward,” he said.

Alcoa transitioned to having four schools, with the opening of the new Alcoa High School in 2015, a major accomplishment,he said. He’s hopeful plans now tabled to renovate and expand Alcoa Intermediate School will be put into action next spring.

Other projects didn’t make it to the finish line. “I wanted to build a track,” Bell said. “Alcoa needs a track and field complex.” He also wanted a fieldhouse for the football team.

School board members are giving Bell a lifetime pass to Alcoa sports, and he fully expects to use it.

“It is really fun when you have a successful program. It’s fun to watch your students succeed,” he said, noting it brings not only the school together but also the community.

Bell reveled in digging into Alcoa’s past and honoring it going forward.

“He had a very great interest in and love of local history,” said Judge David Duggan, the city’s historian. “It’s like he took on the Alcoa schools as his own.”

Duggan recalled Bell sharing with him a set of blueprints discovered for a gymnasium Alcoa planned in the 1940s but never built, and thinking about ways to use elements of the designs today.

From the earliest sketches of the new Alcoa High School, Bell had a hand in ensuring it honored the past, from the arches in front to the aluminum medallion in the commons, a design the director found on an old yearbook. This year’s AHS yearbook is dedicated to him.

Alcoa has “shovel-ready” plans for AIS, and Assistant Director John Campell said, “His signature still is all over that design.”

Its architecture is reminiscent of the Bassel School, which opened nearly 100 years ago in Alcoa and was demolished in 2001.

“Brian as the director of schools seemed to be more excited about the centennial than anyone at the city,” Duggan said, nothing the schools planned monthly events for students to learn about the city’s first 100 years and celebrate.

And while Bell grins whenever he talks about the centennial parade held around the school campus last September, Duggan said, “Had it not been for Brian, that would not have happened.”

Bell also talks with joy and pride about the district beginning its Athletic Hall of Fame and the Hall high school tribute game, when they lit up the AHS dome in blue.

Duggan has high praise for all of the ACS directors he worked with in serving on the schools’ foundation but notes particularly Bell’s direct involvement.

“Brian and Tom (Shamblin) took support of the foundation to a new level,” Duggan said, such as ensuring it had administrative support for its activities from the schools.

Bell also played a role personally in supporting a major fundraiser. “From the beginning Brian was very active in helping us promote the gala,” including soliciting support, Duggan said. “He didn’t just say, ‘OK, you can use the lunch room on this day.’ He was very hands on.”

Campbell said Bell recognized that Alcoa City Schools is a brand, one of which people should be proud.

Bell’s successor, Becky Stone, has known him for nearly two decades, since she started at BCS, and said he has been a wonderful mentor to her.

Stone called Bell a visionary thinker who also knows how to see ideas through to fruition. “He’s a problem solver,” she said, and he knew how to take care of the staff, too.

Bell was closely involved but not a micromanager, Campbell said. “He did more than just handle the administrative burdens.”

Calling Bell “a truly effective director,” Campbell said, “I have absolutely loved working with him.”

“He was in all of our buildings all the time,” Stone said, sometimes just to say hello or listen at the end of a principal’s difficult day.

“I don’t know that I’ve ever seen him angry,” she said in a comment echoed by many. “He helps to calm the waters.”

Bell has no big plans ahead other than teaching and spending time with his family. “I love being with my wife and traveling with my wife,” he said, noting they also go to the gym together.

While some of their four children have traveled internationally, Bell’s priority has become a family joke. “Before I go to Europe, I want to go to Vermont,” he said.