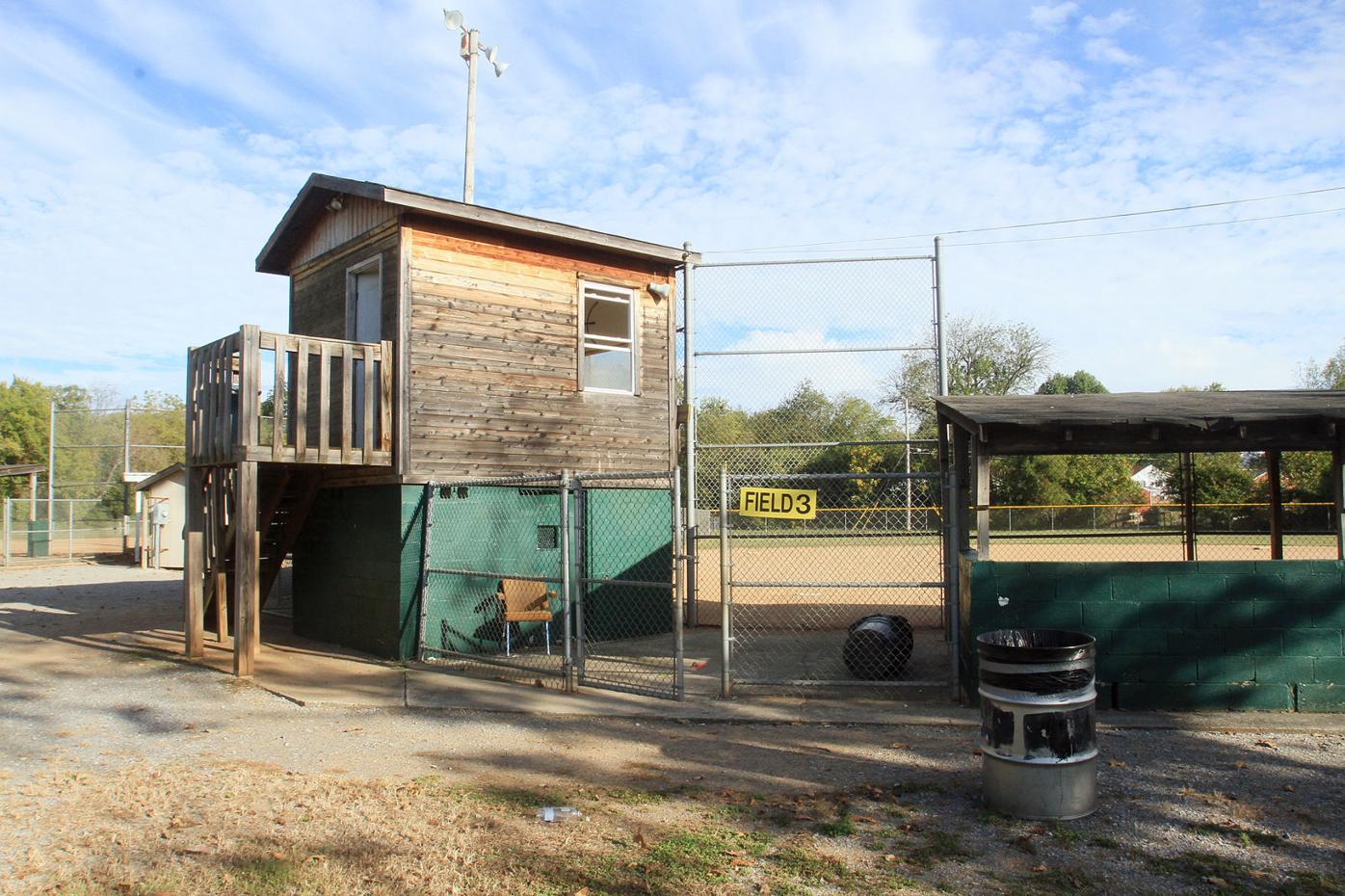 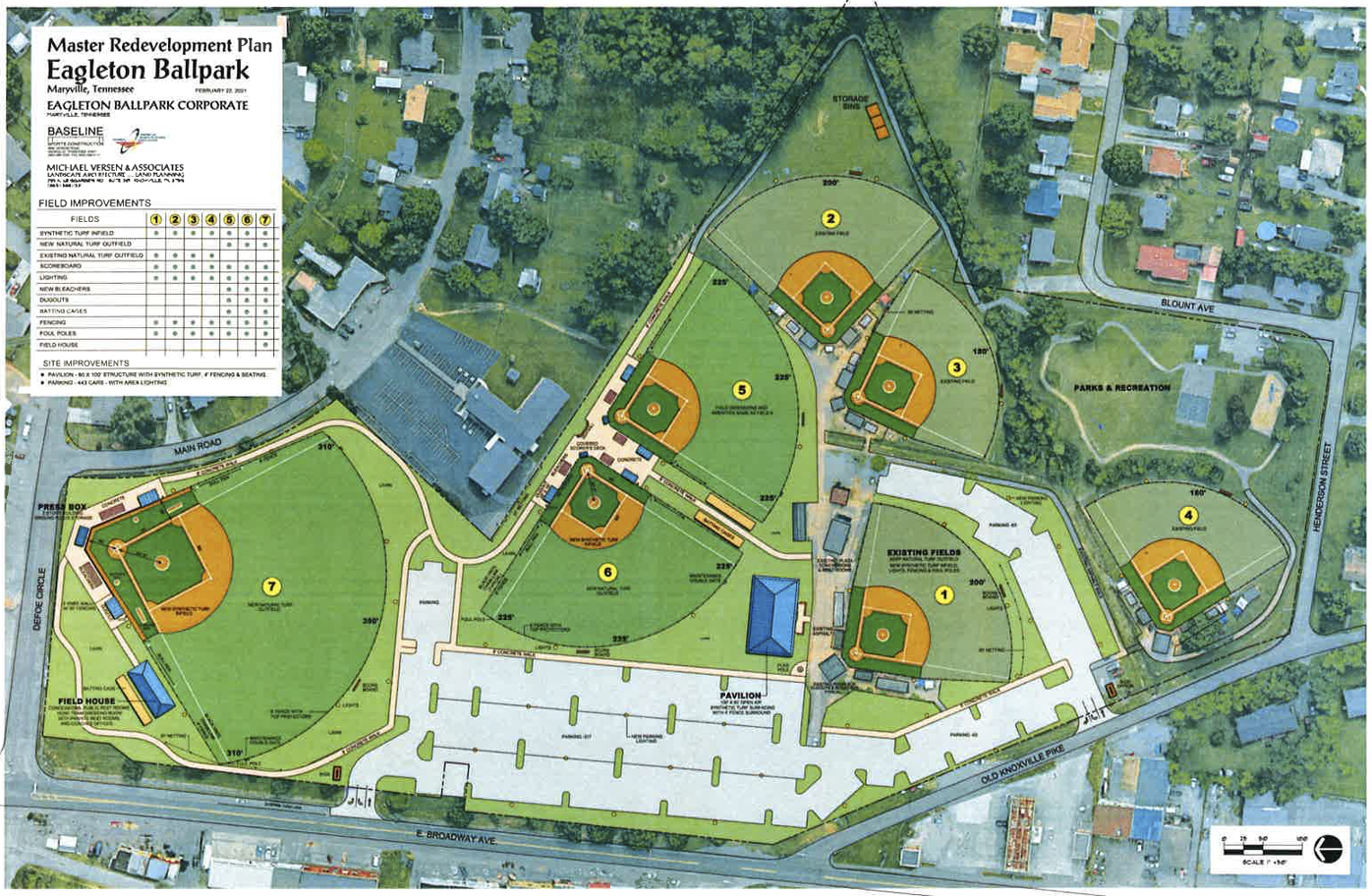 Proposed designs for upgrades at Eagleton Ball Park show some reconfiguration of the current layout and the addition of elements like a pavilion and synthetic turf.

Proposed designs for upgrades at Eagleton Ball Park show some reconfiguration of the current layout and the addition of elements like a pavilion and synthetic turf.

A baseball complex in the heart of Blount County is in the running for a major facelift in the 2021-22 fiscal year.

County Mayor Ed Mitchell proposed in an April 9 budget workshop upgrades to Eagleton Ball Park so significant that it could bring more than $10 million in tourism dollars to the county annually and host tens of tournaments a year on its seven fields, he said.

Renovation concepts at the 2600 E. Broadway Ave. facility were tossed around a year before Mitchell brought the capital project concept to the County Commission last week.

The Maryville-Alcoa-Blount County Parks and Recreation in January 2020 took a stab at a redesign, its board of commissioners voting to spend nearly $25,000 for a rehabilitation master plan.

But Parks and Rec staff are no longer involved in that endeavor, Director Joe Huff said.

“Our idea was to wipe it clean, put a complex in, do all that,” he told The Daily Times this week, adding the county’s approach may be to “fix what’s there and not change it up at all, so our play wasn’t really relevant.”

One of the largest changes would be the addition of synthetic turf, which Eagleton Ball Park President Scott King said could prevent rainouts.

“That and it cuts down on your maintenance,” King said by phone Wednesday. “That’s a huge advantage of the turf and it’s a huge draw for people to want to come and play on it.”

King and Eagleton Ball Park Vice President David Wells said though they have not been a part of the revitalization discussion yet, they’re interested to see what the mayor’s office does with the proposal.

“This will be a total facelift,” Mitchell told commissioners. “(A) sports complex ... like this does not exist in Blount County and would have a tremendous impact.”

He said not only the county but the “entire East Tennessee region” would benefit from the proposed update.

“This gives us an opportunity to be excited about something that will not only work for our community but also for our schools and our kids in this area,” Mitchell said. “A lot of my life was spent on these grounds right here,” he added. “I played a lot of ball there and I’m one of those people that grew up in Eagleton and I still live in Eagleton. ... I’ve been very blessed by this community.”

“(From) the guidance we think we’re going to get on the American Rescue Plan Act of 2021, we think that this would qualify as a community and economic development project under that statute,” Vineyard explained to Commissioner Sharon Hannum.

Hannum also asked about parking capacity and whether the improved complex would invite more traffic to the area. Mitchell said the changes may increase tournament activity at the park by 30%, since the fields could be used in cooler weather.

He also said there will be two fields dedicated for the planned Eagleton College and Career Academy, one for boys baseball and one for girls softball. A draft budget reviewed during Blount County Board of Education’s April 1 work session included more than $6.7 million in spending for fiscal year 2021-22 to expand Eagleton Middle School, which is just a few blocks north of Eagleton Ball Park.

Officials did not discuss any cost estimates for the project during the meeting.