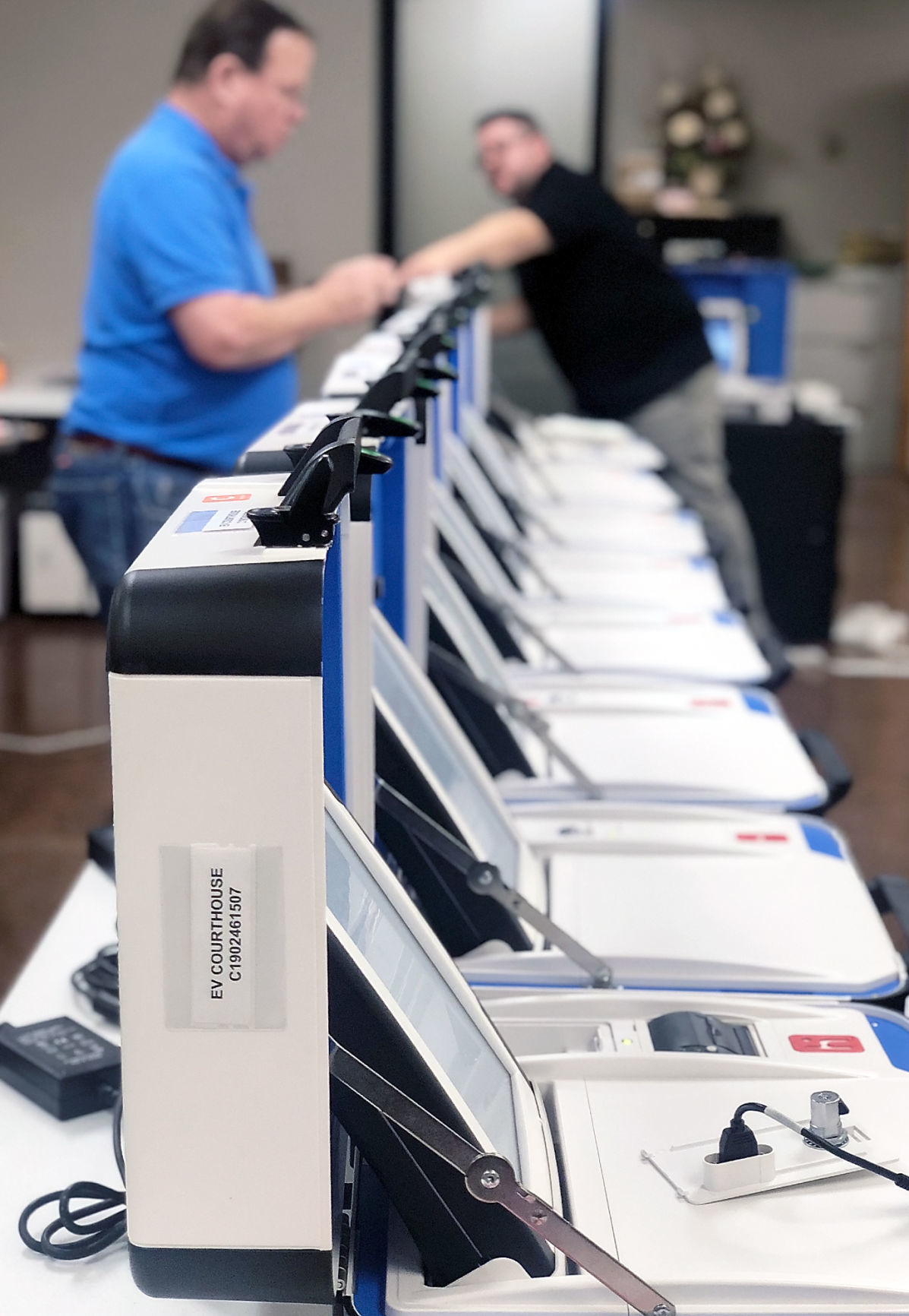 Voting Terminals are being prepared for upcoming elections at the Election Commission Office at the Blount County Courthouse. 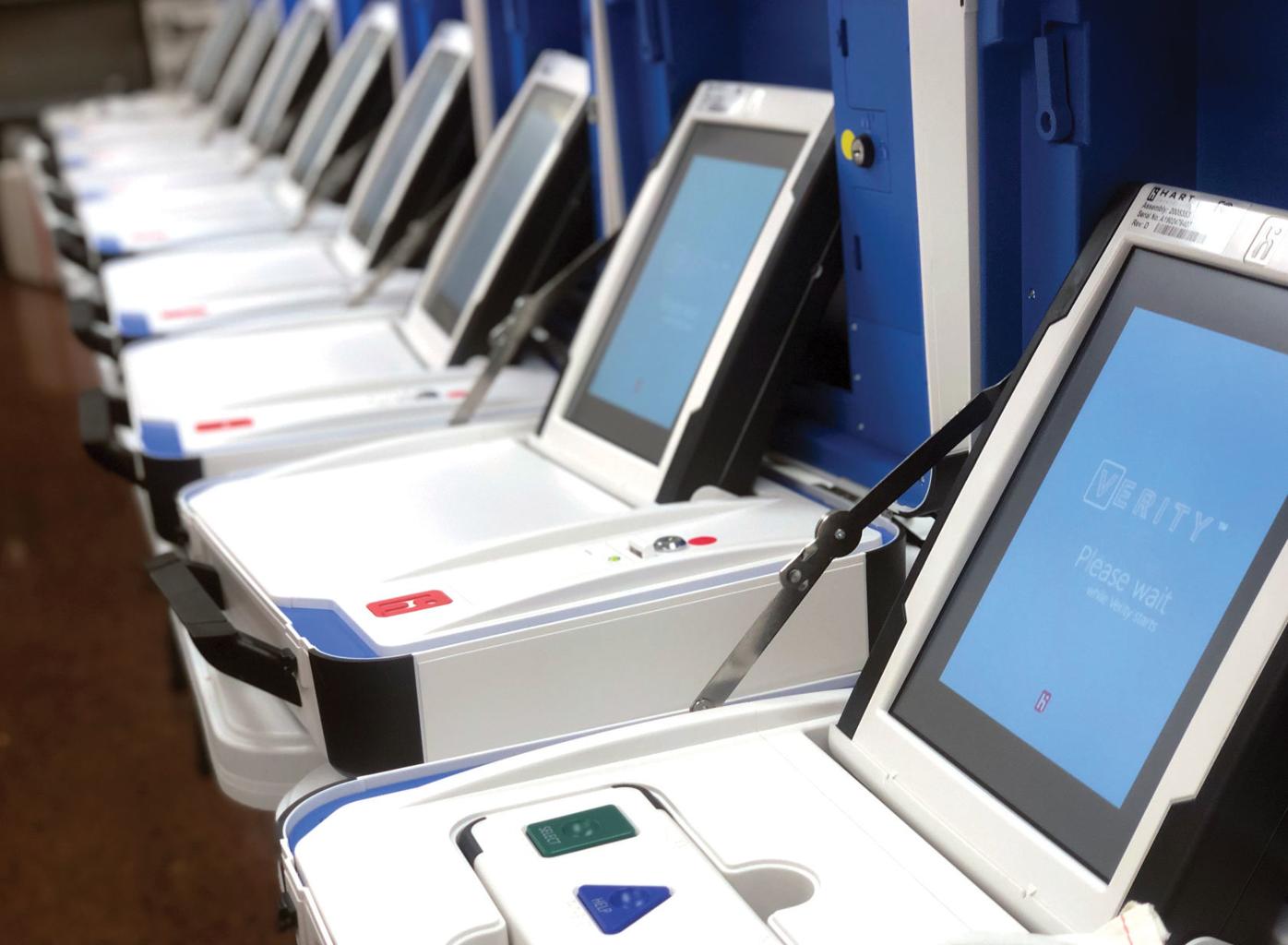 New voting terminals are set up and ready for use on Jan. 23 at the Blount County Election Commission.

Voting Terminals are being prepared for upcoming elections at the Election Commission Office at the Blount County Courthouse.

New voting terminals are set up and ready for use on Jan. 23 at the Blount County Election Commission.

Voting machines are mandated by state law to be tested before every election, said Susan Knopf, Blount County’s administrator of elections. This year, she said, was especially important for the county because of the recent purchase of paperless voting machines.

The county commission in September approved the election commission’s budget request of $1,219,370 to purchase new high-tech voting equipment. Within the month, 180 new voting machines had been purchased. Months later, four technicians spent Wednesday and Thursday of this week testing the functionality of the machines, casting fake ballots and securing machine seals.

In previous elections, Blount County had only two machine technicians; however, two more were added to match the number of technicians in surrounding counties, Knopf said.

The technicians — two Democrats and two Republicans appointed by the election commission — test the machines and are on standby on election day in case any machines require troubleshooting, Knopf said.

Blount Countians wishing to vote early in the upcoming presidential primaries can do so at the election commission office in the courthouse or in one of four satellite locations.

For this election cycle, the election commission designated a new satellite location in the annex of Providence Baptist Church in Seymour, Knopf said.

“It’ll hit all the voters out there in that area because some don’t come all the way into town,” she said.

Upon entering one of these locations, a voter is given a brief “application,” which determines that he or she is registered to vote.

The voter then proceeds to the “controller,” or device that distributes five-digit check-in numbers. The poll worker operating the controller assigns the voter to a polling station.

The equipment, which is stored in what looks like a suitcase, sits open on the tables. Once opened, a large touchscreen tablet — which has adjustable text sizes and options for audio and is adaptable for a variety of special needs — is perched on the backside.

After arriving at the machine, the voter would type in the unique five-digit number, which is assigned once and cannot be reused.

At this point, the voter may begin to choose candidates.

After completing the ballot, the voter is asked three times if he or she is ready to submit it. After the voter agrees, the ballot is submitted and is stored on a jump drive, which has a specific number and is protected by a lock and a seal.

At the end of the day, the voting equipment is returned to the election commission office, the jump drives are inserted into a computer and Knopf begins counting.

Many Blount County Commissioners and community members at September’s commission meeting voiced concerns about the new machines, which are considered controversial because of their lack of a paper trail. Knopf and a representative from Harp Enterprises, vendor of the machines, assured them the machines have been found to be safe.

In November, residents in Shelby County filed a lawsuit against their local government for using the same machines Blount County had purchased just months earlier.

Tennessee is one of eight states that still have counties using paperless voting machines, Liz Howard, counsel for the Brennan Center for Justice’s Democracy Program, said in a November phone interview.

Howard was one of 13 current and former election officials from Brennan Center, who filed an amicus brief with the residents of Shelby County, who served as the plaintiffs in the lawsuit.

The Shelby County suit was sent to the Court of Appeals after the court ruled “the potential harm was too speculative,” Howard said.

“The big issue if you don’t have a paper trail is you can’t go back to that paper record and verify that outcome,” she said.

However, Knopf during September’s commission meeting addressed the concern of not having a paper trail.

“There is absolutely no evidence that any electronic voting equipment has been compromised in an election,” she said.

To vote in the presidential preference primary election on March 3, you must be registered to vote by Feb. 3.

To vote in the state primary election on Aug. 6, you must be registered to vote by July 7.

To vote in the general election on Nov. 3, you must be registered to vote by Oct. 5.