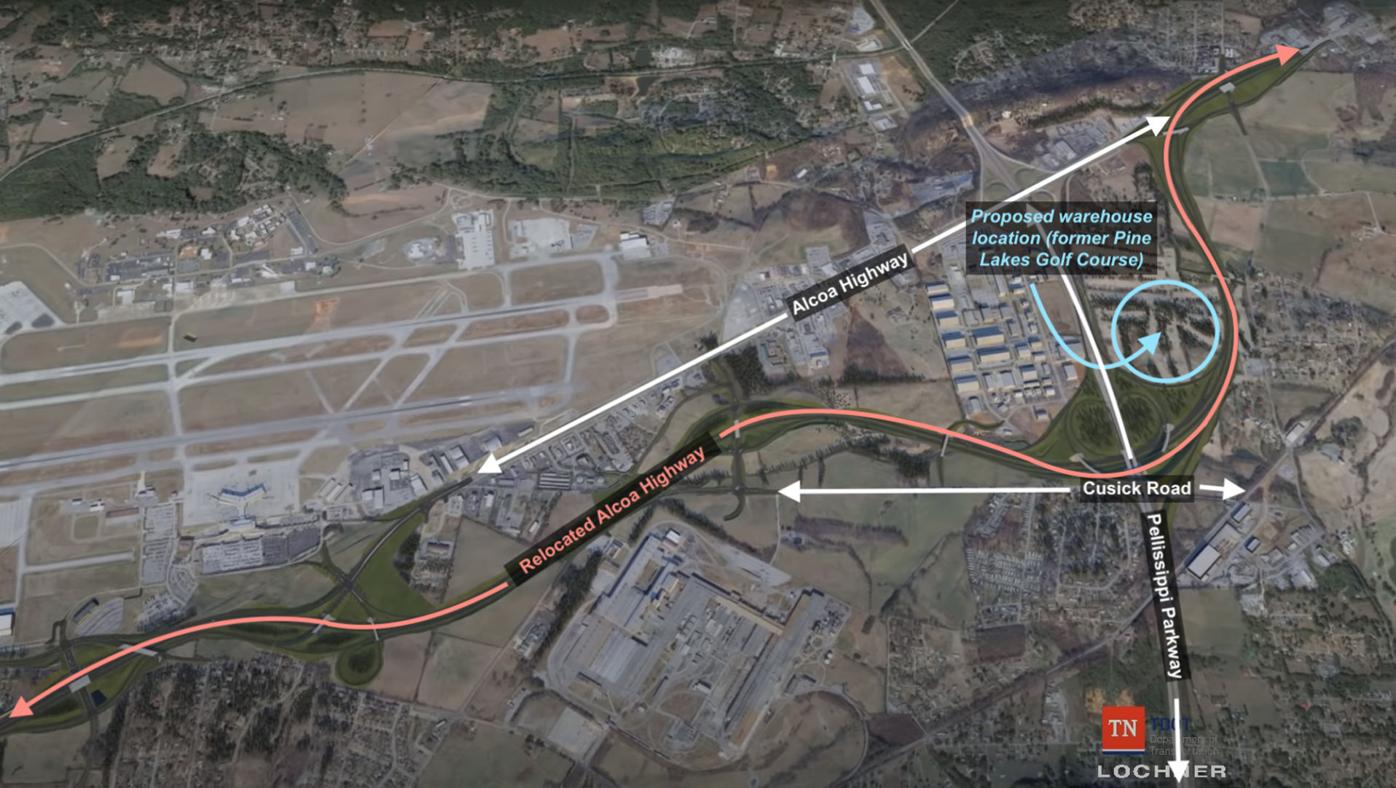 Routes drawn by The Daily Times staff on a Tennessee Department of Transportation digital rendering of the relocated Alcoa Highway project show the proximity of a proposed warehouse in the area. Completion of the Alcoa Highway relocation may take until the mid-2020s while a road project providing warehouse access could be complete by spring 2022. 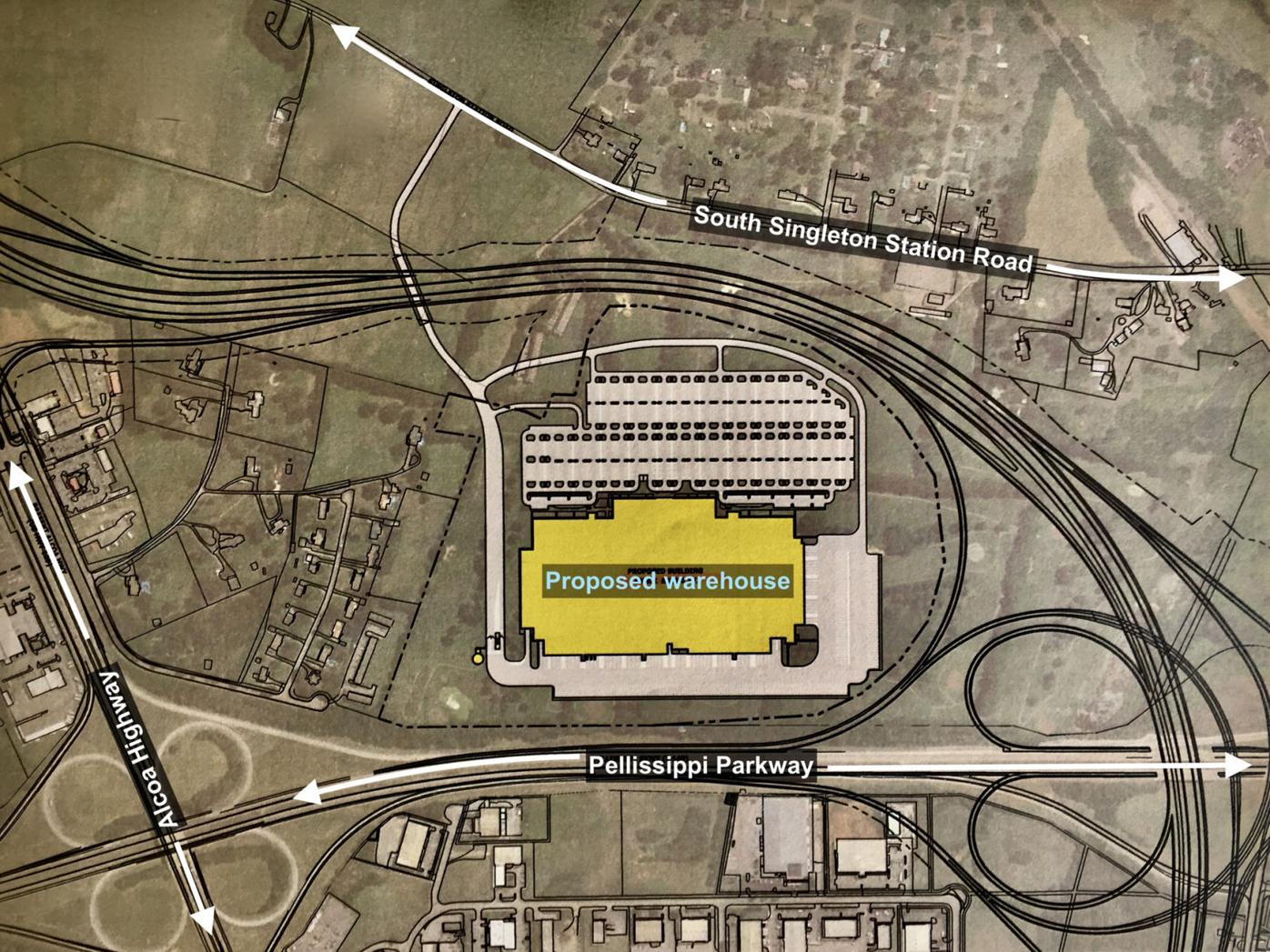 A map prepared for potential warehouse developer Hillwood by Cannon & Cannon engineers shows how access to the site could be attained via South Singleton Station Road.

Routes drawn by The Daily Times staff on a Tennessee Department of Transportation digital rendering of the relocated Alcoa Highway project show the proximity of a proposed warehouse in the area. Completion of the Alcoa Highway relocation may take until the mid-2020s while a road project providing warehouse access could be complete by spring 2022.

A map prepared for potential warehouse developer Hillwood by Cannon & Cannon engineers shows how access to the site could be attained via South Singleton Station Road.

Hundreds of Tennessee Department of Transportation emails and documents dating from late summer through mid-November show state and local officials expediting their way through technical barriers for a potential Amazon warehouse.

Proposed for the former Pine Lakes Golf Course at the corner of Pellissippi Parkway and Alcoa Highway, preliminary designs show the e-commerce’s distribution hub would sit on a 634,812-square-foot pad and stand about 100 feet tall.

Alcoa City Manager Mark Johnson said Hillwood principals have not put pen to paper yet, but he’s expecting a decision in the near future.

Since the warehouse would see daily traffic of some 200 trucks — with a potential peak traffic time between 7 a.m. and 6 p.m. — establishing its connection to Alcoa Highway has been a top priority for and somewhat of a conundrum for TDOT.

As early as Aug. 11, TDOT officials were emailing internally about the project.

The road improvements for the warehouse would be directly in the path of the Alcoa Highway relocation project — a yearslong TDOT initiative that would shift the road east, dipping down to intersect with Pellissippi Parkway near Cusick Road.

“Making changes to what is currently under development will be problematic and create major delays,” TDOT Economic Development Transportation Coordinator Danielle Hagewood wrote in an Aug. 11 email obtained by The Daily Times.

She was replying to Paul Degges, TDOT’s chief engineer, asking for information on a “potential economic recruit” to Blount County, known to be Amazon because of a legal document the company and Hillwood principals signed Nov. 18.

Hagewood went on to note there would need to be investigations about improvements on South Singleton Station and Cusick roads. “These improvements will be needed if Pearl locates there,” she wrote.

Later she emailed the TDOT civil engineering manager assigned to East Tennessee, Shaun Armstrong, “Just fyi we may be put in fire-drill mode to develop something for Cusick and Singleton Station. It will need to tie into the Alcoa Highway projects.”

UT and others get involved

Degges even noted in an Aug. 21 email that University of Tennessee President Randy Boyd was involved, given the school owns land near the proposed warehouse site.

“(Boyd) told (TNECD) that he would be able to support a land transfer for any needed right-of-way,” Degges emailed.

Near the end of August, Degges noted a TDOT project to provide access to the warehouse (a state endeavor known as a State Industrial Access Road project, or “SIA”) would be “delivered with 100% state funding.” Suggesting changes to the way designs would create a new intersection with Pellissippi Parkway and the relocated Alcoa Highway — which would happen at Cusick Road — Degges said a “tight schedule” could allow the SIA to go out for a contract by late summer 2021.

The matter of signed contracts was one at the forefront of Alcoa leadership’s discussion since Project Pearl was made public in mid-October in city planning notes. Hillwood has not fully committed to the warehouse, but multiple state departments already are mapping a timeline.

According to several emails and documents:

• Initial application documents would be (and were) signed by October 2020.

• Utility plans could be submitted by March 2021.

• Construction letting could start as early as June 2021.

• The TDOT project allowing Alcoa Highway access to Project Pearl could be done by spring 2022.

But overlapping project schedules, funding concerns and a tangle of access questions are clear in emails sent in September and October. Engineers from TDOT and Knoxville-based Cannon & Cannon — an engineering firm contracted by Hillwood to design the project — exchanged a barrage of road-layout options: some digitally crafted, some sketched by hand.

These were mostly trying to accomplish two things: create a design for the relocated Alcoa Highway intersection at Pellissippi Parkway right where the warehouse would be located, and provide ample entrance and exit options for warehouse traffic via South Singleton Station Road — though at least two temporary access roads via Cusick Road and Pellissippi Parkway have been proposed.

Moreover, engineers were trying to figure out how to get efficient access from the warehouse site to Alcoa Highway, a problem they seemed to have difficulty solving at some points.

“I think the industry has significant concerns regarding the intersection of Singleton Station at Alcoa Highway and may be ready to move on,” Degges emailed Hagewood on Sept. 8, attaching one of several updated proposals. “The attached drawing is the last-ditch effort to keep them interested.”

Alcoa and TDOT will put nearly $16 million into SIA

Throughout the process, those involved in solving the Project Pearl vs. Alcoa Highway relocation riddle repeatedly mentioned the situation’s urgency and the need to expedite traditional processes.

“I know this is not the norm, but we are getting pushed on this one,” Hagewood emailed one TDOT employee Oct. 5.

“Things are kind of being done out of order here, so approval letters etc. may come later,” she emailed Johnson on Oct. 9.

That didn’t stop Alcoa commissioners from voting unanimously Oct. 13 to send TDOT a request to partially fund the SIA project.

According to the request — signed by Mayor Clint Abbot and sent back to TDOT by Oct. 15 — TDOT is requested to deal with the SIA construction at a cost of $12,679,500 with Alcoa picking up $3,265,000 in utility and right of way expenses, according to department estimates generated Oct. 7.

By Oct. 16, the emails indicate many kinks may have been smoothed out.

“This is looking very likely at this point,” TDOT Region 1 Project Development Director Dexter Justis emailed several of his colleagues three days after Alcoa voted to approve the request: “We probably need to circle the wagons to see what we need to get started officially.”

TDOT learns of Pearl in August

By Oct. 20, a new proposal for funding two phases of the Alcoa Highway relocation project also was shared within the department: On that day, Justis emailed Degges the relocation construction would cost an estimated $182 million.

According to estimates generated from 2017-18, the relocated Alcoa Highway project originally was set to cost an estimated $157.5 million.

That price hike, according to TDOT spokesman Mark Nagi, was not because of Project Pearl.

He emailed The Daily Times that the $182 million estimate was produced in March, “prior to any knowledge of Project Pearl ... (which) will have little effect on the overall cost to deliver these two (Alcoa Highway relocation) projects.”

Though costs may not have changed, plans have.

“We will have to deliver certain parts of (the Alcoa Highway relocation) in certain orders to accommodate the operation of the facility during construction,” Nagi emailed. “The stand-alone (SIA) project serving Project Pearl will improve access from the proposed Singleton Station interchange to the property being used to develop Project Pearl.”

He added Justis couldn’t say definitively when the first person at TDOT became aware of Project Pearl, but that he personally was responsible for the development of Alcoa Highway and the estimates.

Talks begin by at least July

Though TDOT has been reviewing intensely necessary changes to its work from August through November, a traffic study prepared for Hillwood by Cannon & Cannon contains meeting minutes that show TDOT officials as well as Alcoa city officials including Johnson met on July 17 and July 20 to talk about the project.

“Hillwood had a very tight timeline,” Johnson said in a recent phone interview to discuss the project’s urgency and how it affected Alcoa city officials’ cooperation with TDOT. Though he said he could not confirm or deny Amazon’s role in the project, he did speak to various timelines.

He said originally Hillwood wanted to be in operation within 22 months. “That’s changed a little bit,” he added. During the July 17 meeting, Johnson and others discussed the possibility of bringing the warehouse to life in “2 to 3 years including permitting and construction,” according to Cannon & Cannon meeting minutes.

When asked about concerns about the city spending money on an incoming business, Johnson said, “You have to spend money to make money.”

Given the example of the Alcoa Intermediate School building — a much-needed expansion and repair project pushed to the back burner for several years because of budgeting issues — Johnson said “if the warehouse project lands” it will help pay for the school project, which was slated to cost an estimated $22.5 in January 2019. The price has risen nearly $2 million since, according to an individual close to the project.

Multiple documents indicate that, when it comes to speed of completion, TDOT’s access project for Project Pearl will be done before Alcoa Highway is relocated, meaning that, for years to come, Blount residents traveling in the once-quiet golf course area may have to navigate not just increased traffic, but a network of unfinished and even temporary roads.

A distribution hub proposed for Alcoa would be occupied by e-commerce giant Amazon, accordin…