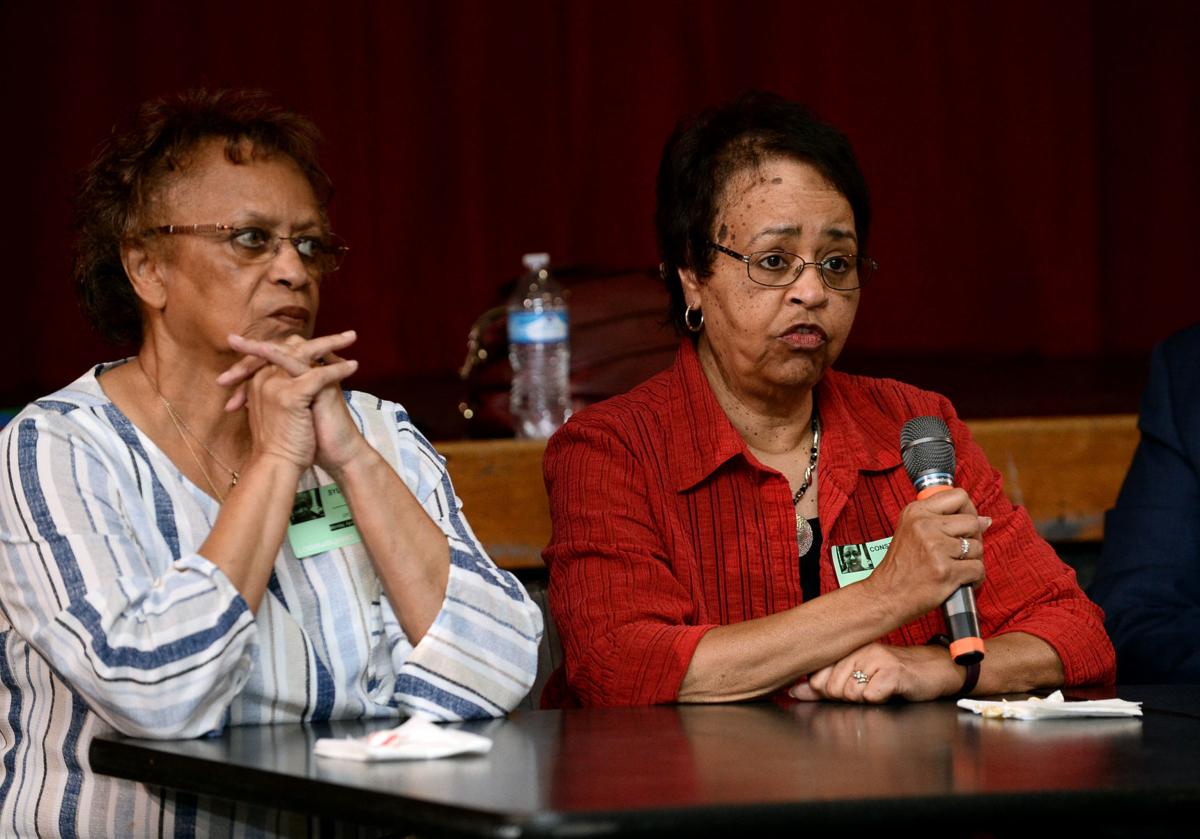 Sylvia Porter (left) and Connie Hooper Scott talk to Maryville High School students Monday about being among the first four blacks to attend the school in 1963, along with Ron Coffin and Frank Young. Porter, Scott and Coffin were part of the Centennial Speakers Series, celebrating the 100th class to graduate from MHS. 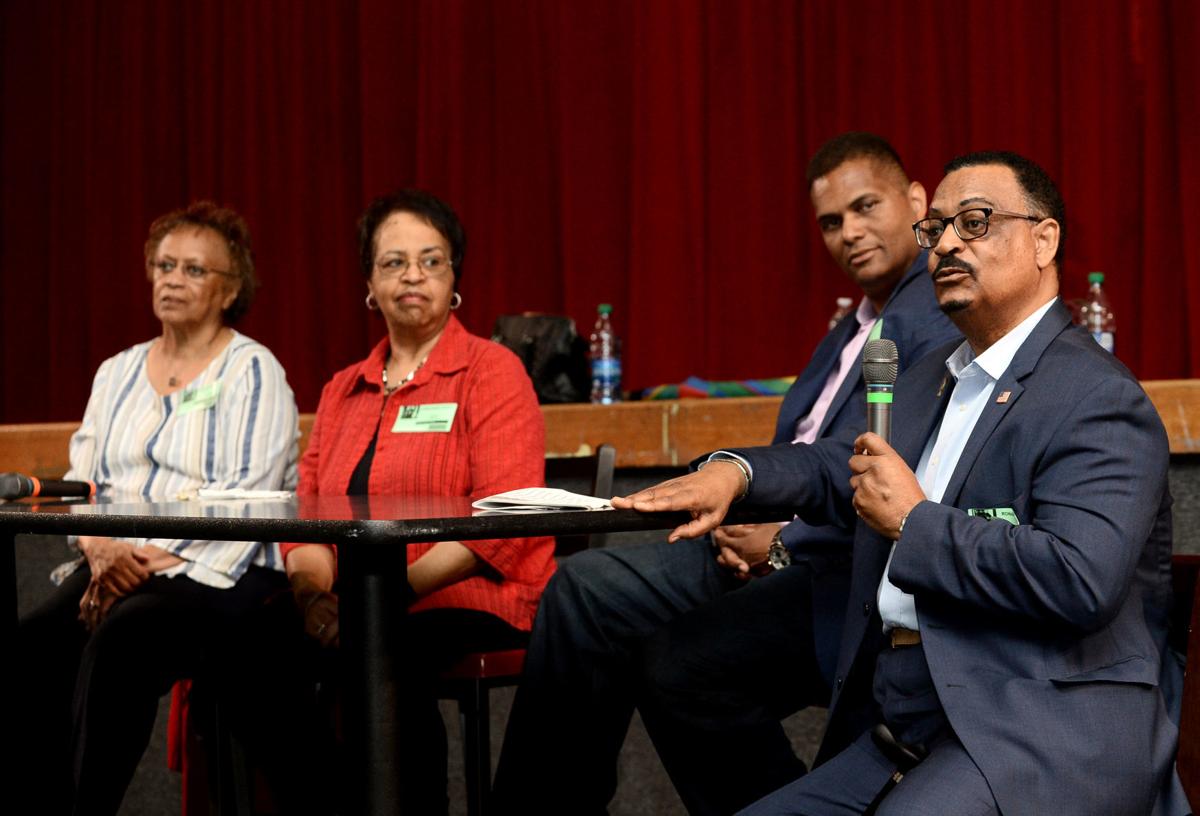 Ron Coffin (right) talks about integrating Maryville High School in 1963 along with Connie Hooper Scott (center) and Sylvia Porter (left). They were joined by Porter's brother, Jerry, for Monday's session of the Centennial Speakers Series at the school. 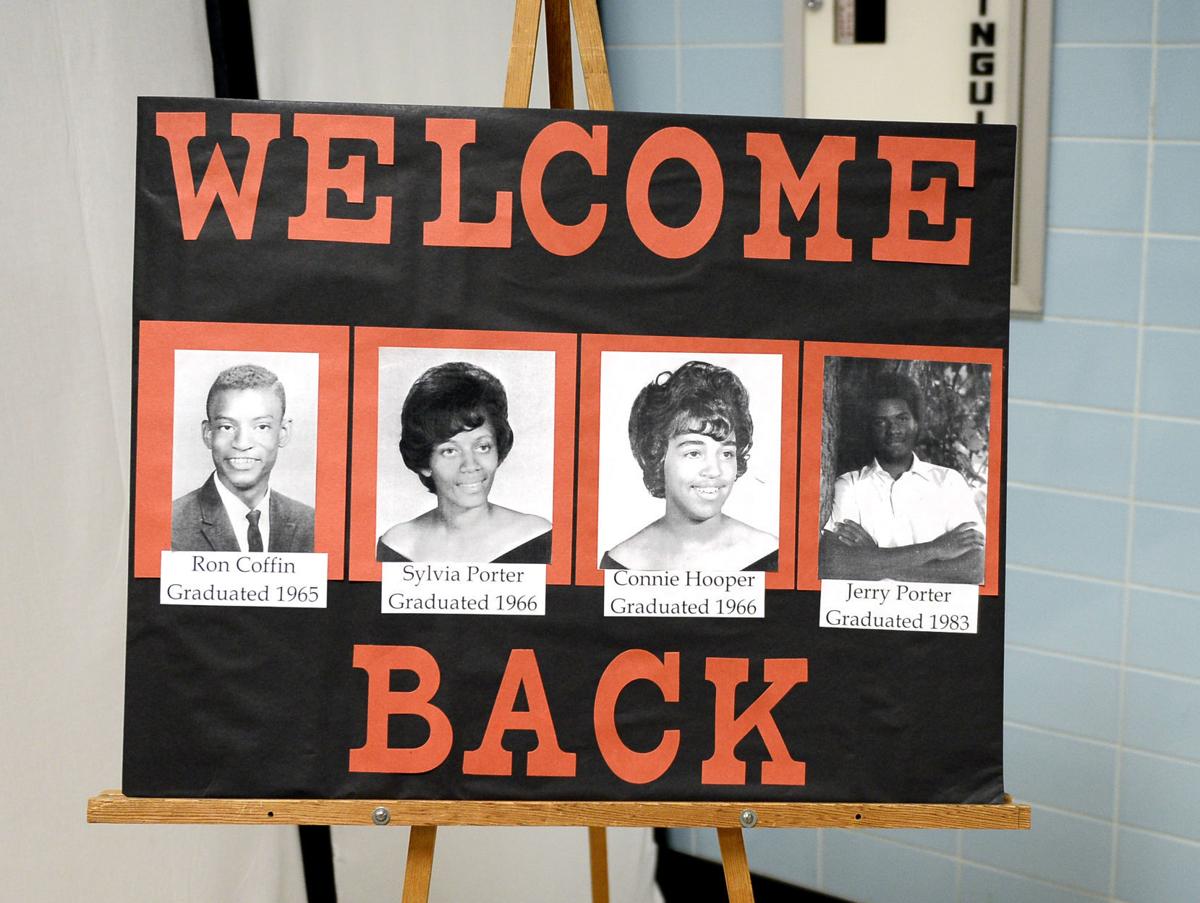 Ron Coffin, Sylvia Porter, Connie Hooper Scott and Jerry Porter were featured Monday at Maryville High School for the Centennial Speakers Series. The first three were among the four black students to integrate the school in 1963, and Jerry Porter discussed the importance of diversity in the workplace today.

Sylvia Porter (left) and Connie Hooper Scott talk to Maryville High School students Monday about being among the first four blacks to attend the school in 1963, along with Ron Coffin and Frank Young. Porter, Scott and Coffin were part of the Centennial Speakers Series, celebrating the 100th class to graduate from MHS.

Ron Coffin (right) talks about integrating Maryville High School in 1963 along with Connie Hooper Scott (center) and Sylvia Porter (left). They were joined by Porter's brother, Jerry, for Monday's session of the Centennial Speakers Series at the school.

Ron Coffin, Sylvia Porter, Connie Hooper Scott and Jerry Porter were featured Monday at Maryville High School for the Centennial Speakers Series. The first three were among the four black students to integrate the school in 1963, and Jerry Porter discussed the importance of diversity in the workplace today.

Don’t look for them in the prom photos or at the class reunions. Their memories of Maryville High School are much different than their white classmates’.

Those days are more like a wound than a time to celebrate, and Sylvia Porter said she prefers not to open that wound by talking about it.

As MHS prepares to graduate its 100th class next month, however, she and two others shared with today’s students a bit of what it was like to be the first black students at the school, starting Sept. 3, 1963.

“It was the worst day of my life,” Porter said during a presentation Monday as part of the MHS Centennial Speakers Series.

Police escorted them to the school, and then they were held in the office while white students attended the morning assembly and prayed. Finally they entered the classrooms after everyone else, each alone. “None of us had a class together,” Porter said, and they didn’t have lunch together.

When Connie Hooper Scott walked into a classroom that first day, someone said, “‘Call the jungle patrol because one of their monkeys got out,’” she told MHS students. “That just really, really tore me up.”

“We knew that they didn’t want us here, but we knew we couldn’t turn back,” she said.

“With our faith and our family and our friends, we endured so much that I wouldn’t even want to talk to you about, but we’re okay, and we did open doors for the ones that are coming behind us,” said Scott, the first African-American student to become a member of the National Honor Society at MHS.

While students today study the Little Rock Nine from Arkansas or perhaps the Clinton 12, the dozen black students in Tennessee who in 1956 were the first to integrate a public high school in the South, Maryville had its four: Porter, Scott (then Hooper), Ron Coffin, who joined them at MHS Monday and Frank Young, who was unable to attend.

Introduced by teacher Penny Ferguson as “unsung heroes” who were on the front lines during a turbulent time in the nation’s history, they received a standing ovation at the end of their presentation Monday.

As they began, Coffin provided some historical perspective, noting among other things that 1963 was the year the touch-tone phone was invented and Congress passed the Equal Pay Act. He noted, “Women still don’t make the same amount of money as men for the same work done.”

Overall, he said, “1963 was a horrendous and horrific year for the civil rights movement.”

It was a year bookended by segregationist George Wallace becoming the governor of Alabama and the assassination of President John F. Kennedy. Fire hoses and dogs were let loose on civil rights protestors, and children killed in a church bombing.

Less than a week after a quarter-million people joined in the March on Washington and heard the Rev. Martin Luther King Jr. deliver his “I Have a Dream” speech, the four black students entered MHS.

“We anticipated violence, and the anticipation of violence is much more stressful than the actual event of violence,” said Coffin, an Army veteran who earned a degree in psychology from the University of Tennessee and worked with soldiers who have post-traumatic stress disorder.

Not knowing when or where violence might come from is more stressful, and that was the environment he and the other teens entered at MHS.

Their parents received threats, a cross was burned near Porter’s and Scott’s homes, and Young was slammed to the ground in a gym class.

In recent years when a former classmate reached out to apologize, Porter said she responded, “Where were you 50 years ago when we really needed someone?”

“We’re not angry at anybody,” she said. While she has white and black friends, she explained that she has no desire to spend time with the former classmates who treated her badly back then.

Young’s sister Alethea “Elaine” Young Lenior was in the audience Monday. She’s four years younger than Frank, and she and another sister started school in Maryville but found the atmosphere still so difficult that they transferred to Everett High, which she said had more black students and a supportive principal.

“To be ignored rather than respected is like being shot, and sometimes psychological wounds are more damaging than physical wounds, and those are the kinds of things that we endured,” Coffin said.

He noted that the land on which MHS stands is “sacred ground” to them, since it previously was home to the Freedman’s Normal School, which trained blacks to become teachers after the Civil War, and where their forefathers had been students and teachers.

“Their blood, sweat and tears is in this ground, and so is ours,” Coffin said.

Two decades after the Maryville Four started school at MHS, Porter’s younger brother Jerry graduated from the school amid a much different atmosphere.

“I wouldn’t be where I’m at today if not for the courage that they showed during that time frame,” said Jerry Porter, a chemical engineer who’s now a vice president at Procter and Gamble.

“We came and we conquered,” Sylvia Porter said. She and Scott graduated from Knoxville Business College and both went to work at the Aluminum Company of America. After seven years Porter went to work at Oak Ridge National Laboratory, and both women are retired now.

Three of Porter’s brothers graduated from MHS, as did her son, who is an electrical engineer. “In the end it paid off, but it was not a happy time for us,” she said.

Coffin doesn’t say he and his classmates integrated MHS. “Maryville High is still in the phase of becoming integrated,” he said, noting the lack of diversity among teachers and administrators.

Responding to a student’s question, Coffin said he still faces incidents of discrimination every day. And when a teacher asked how students could make others who are different from them feel welcome in the school, Coffin replied, “Don’t ignore me. Just give me the respect of being a person. Just acknowledge that I am just like you.”

Jerry Porter, who leads 1,500 scientists and engineers around the globe, told the students that in today’s world, “You have to elevate everyone, you have to integrate to get the most out of everyone.”

He recently terminated an employee whom he could not trust to lead an organization without being biased.

‘In the final analysis there is only one race, the human race,” Coffin said.