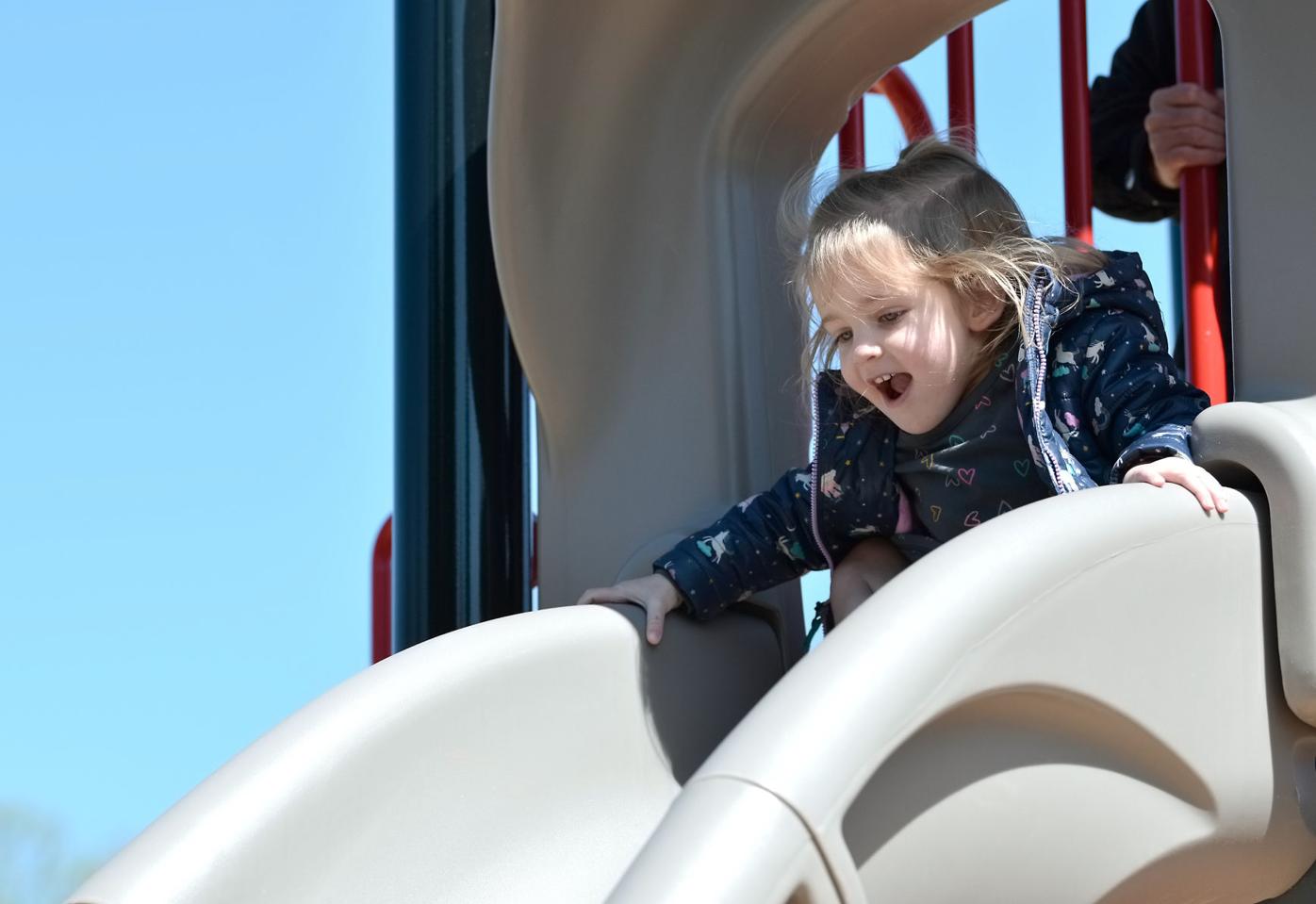 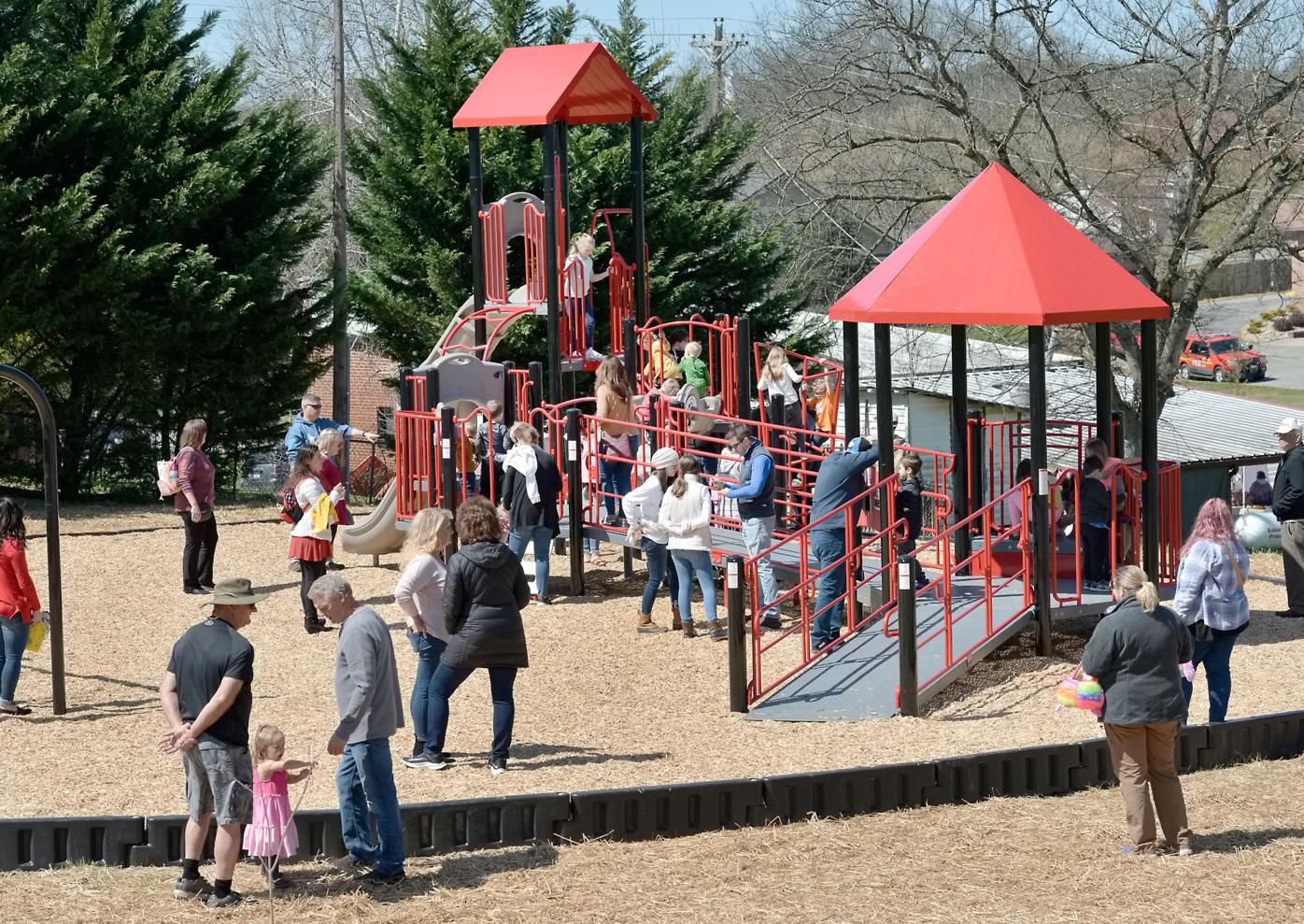 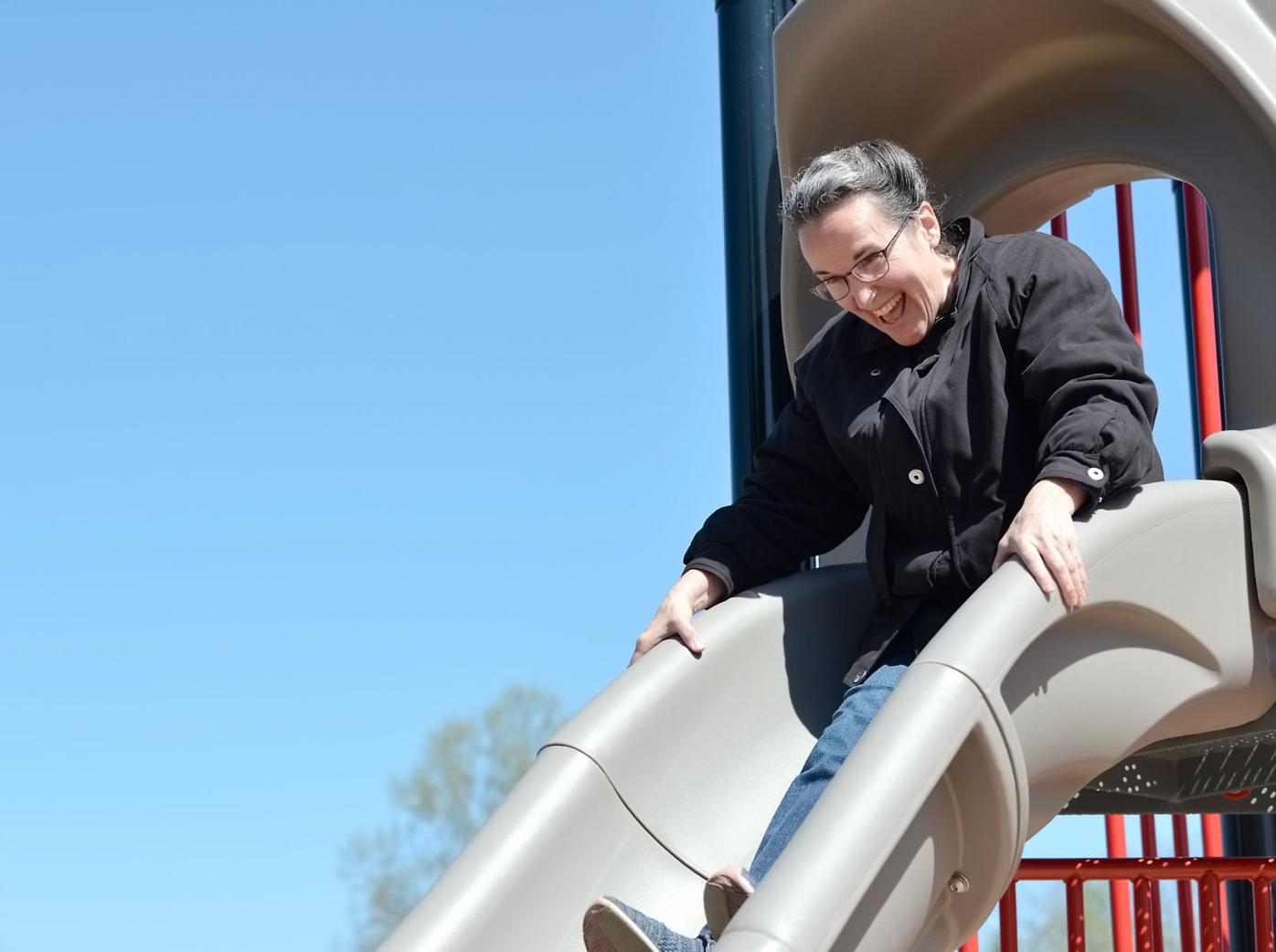 Jane Howe heads down the slide after escorting her granddaughter to the top of the new playground equipment in Friendsville. 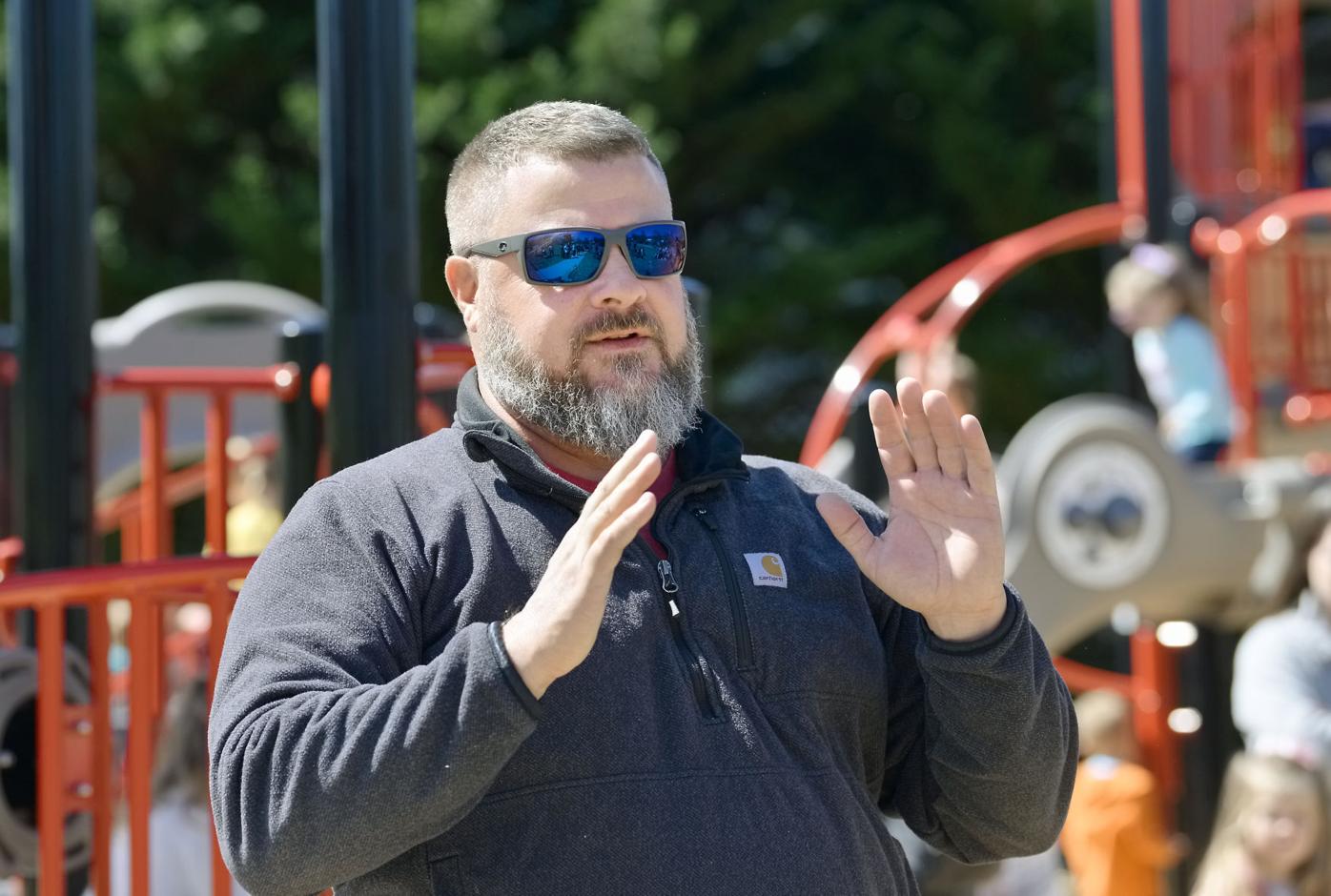 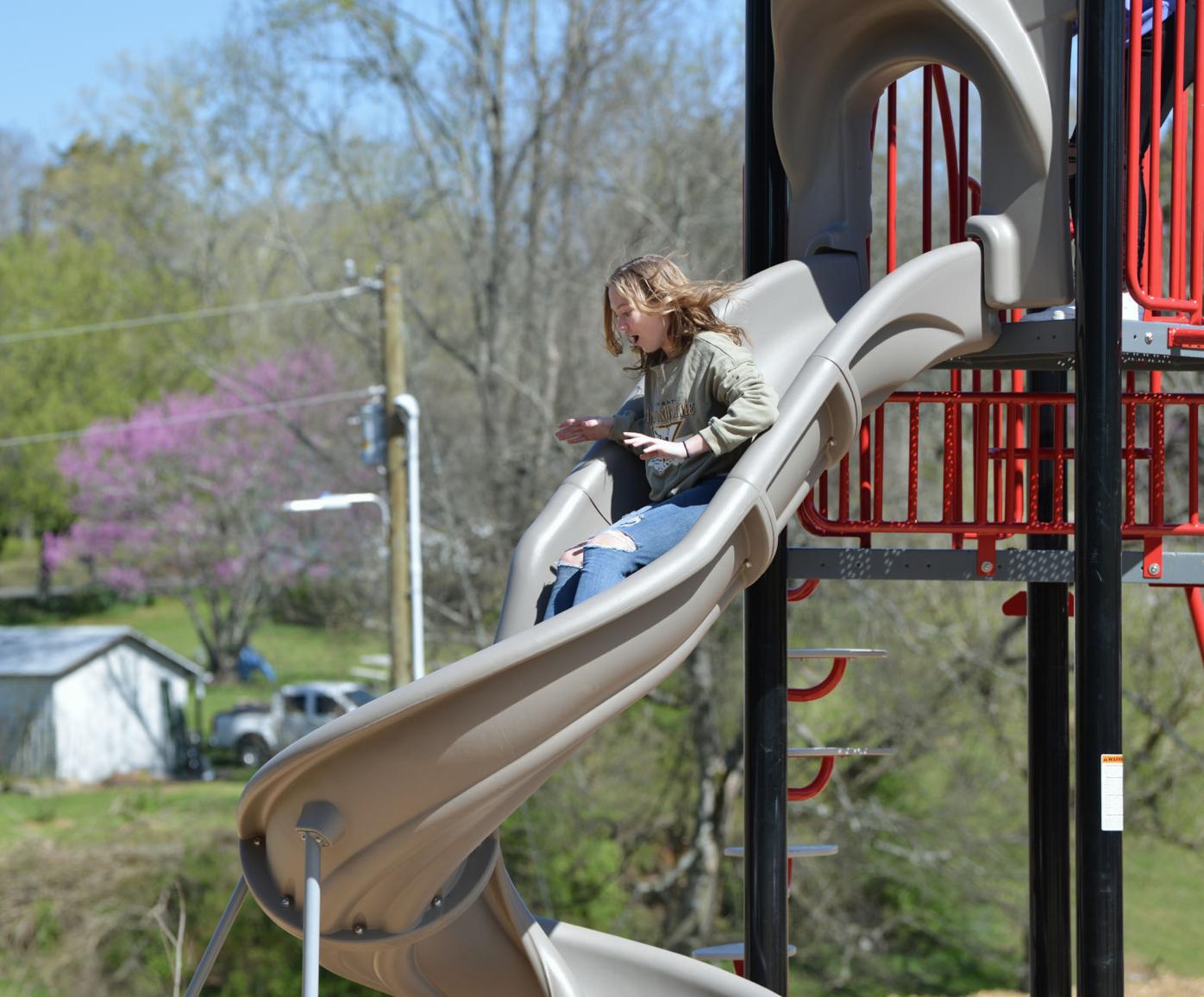 Emily Floyd takes the big slide after helping to prepare the new Friendsville playground for its grand opening Saturday afternoon. 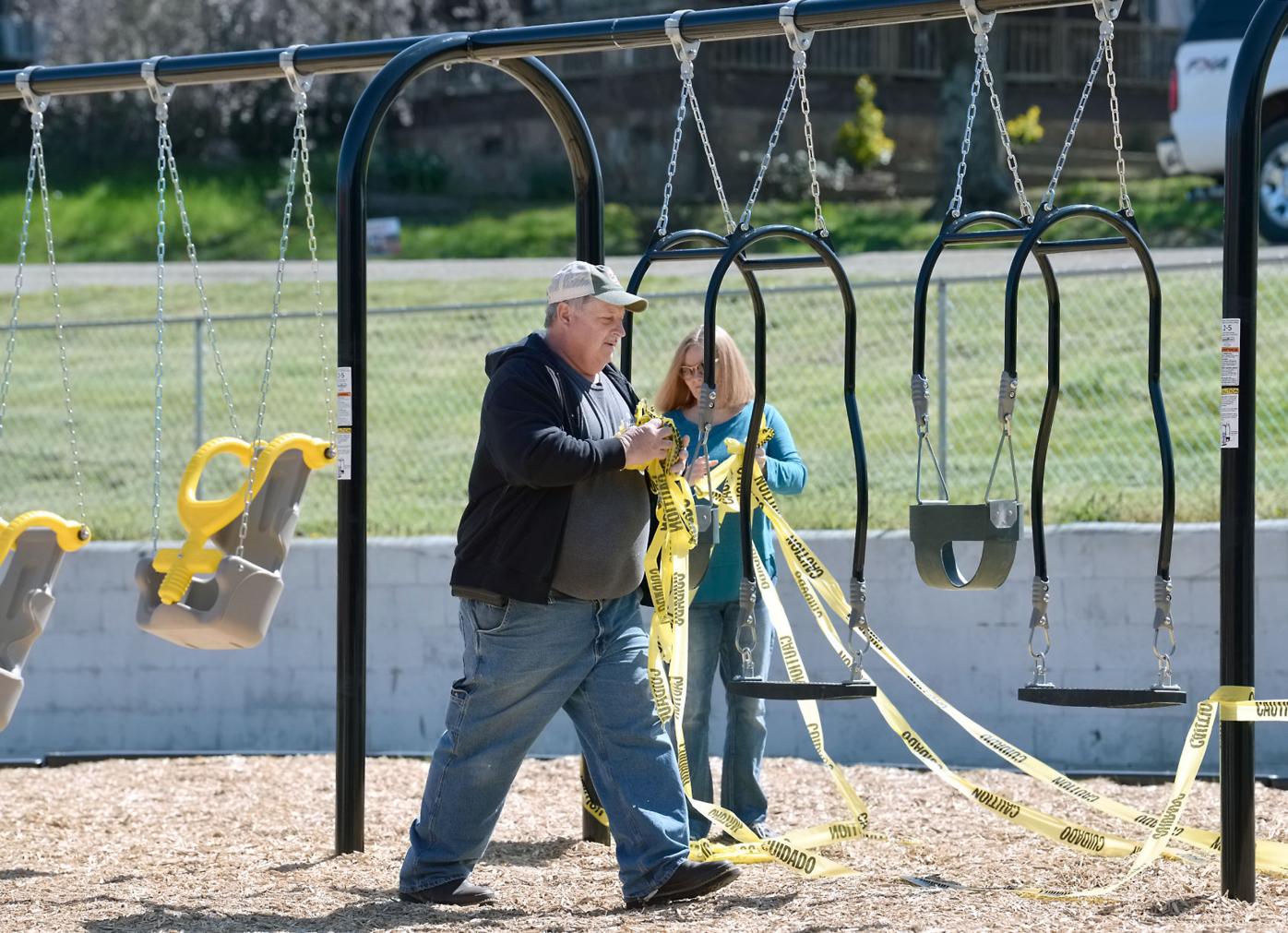 David and his wife and Friendsville City Recorder Janet Ledbetter prepare for Saturday’s opening of the city’s new playground by removing caution tape from the swings. 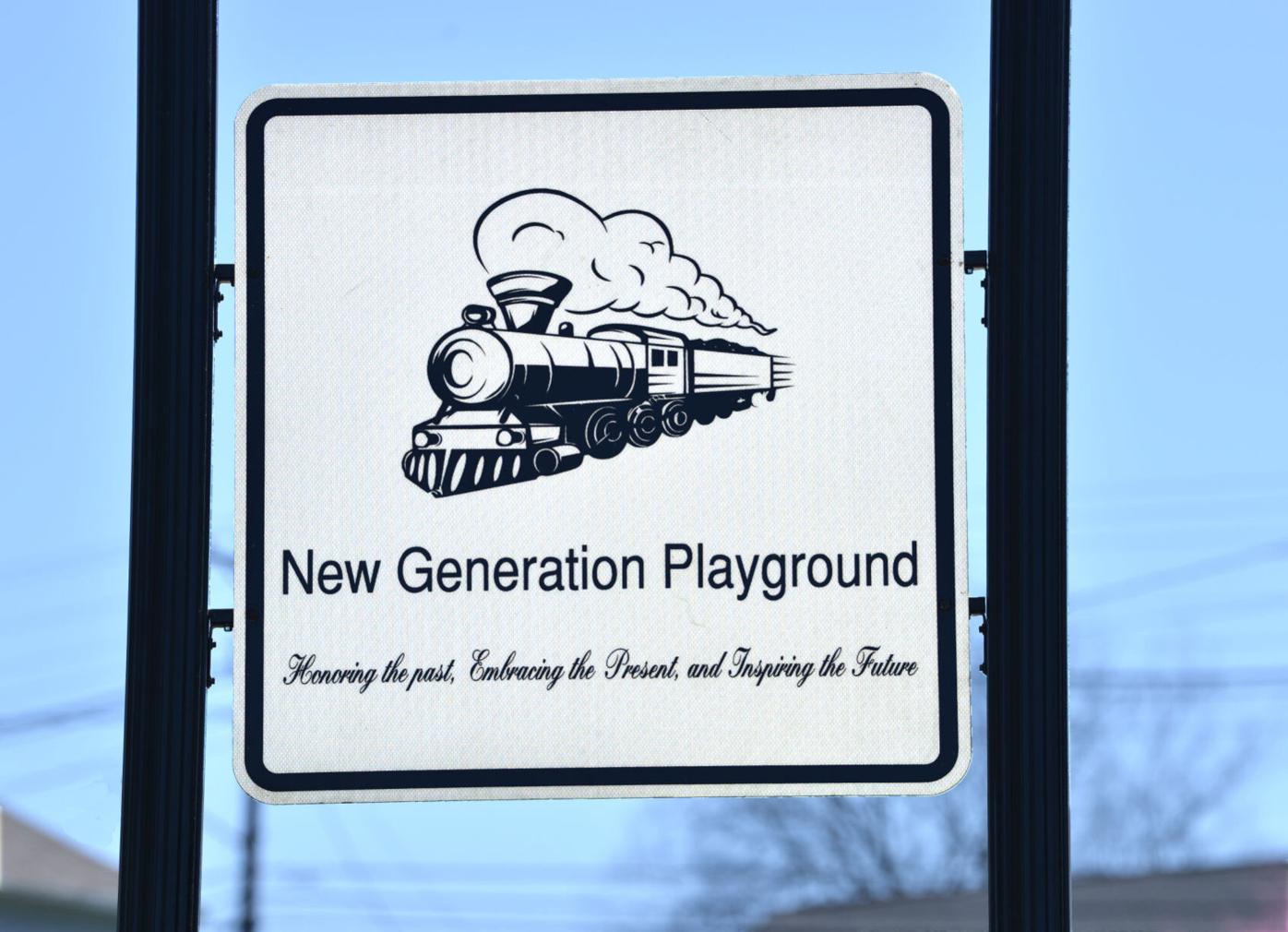 Jane Howe heads down the slide after escorting her granddaughter to the top of the new playground equipment in Friendsville.

Emily Floyd takes the big slide after helping to prepare the new Friendsville playground for its grand opening Saturday afternoon.

David and his wife and Friendsville City Recorder Janet Ledbetter prepare for Saturday’s opening of the city’s new playground by removing caution tape from the swings.

After Easter services today, families in Friendsville have a chance to test-drive a city feature that’s only 1 day old.

On April 3, city leaders gathered to cut the caution tape off the long-planned, inclusive city playground and open it to the public.

It’s called the “New Generation Playground” and has been a labor of love and fundraising for more than three years.

Friendsville Mayor Andy Lawhorn celebrated the park’s first day, giving a speech to a large, bustling crowd. Soon after, kids and parents alike were scrambling over the city’s newest attraction.

“The children are our future,” he told The Daily Times in an interview Friday. “This is just one more thing we can do for the kids in our community, have that playground there so they can come and use it any time they want.”

Complete with wheelchair access and just a stone’s throw from city offices — it’s inside the corner of North Farmum Street and West College Avenue — the playground is more than just a community-oriented attraction, leaders say: It’s a springboard into a very busy future for the city of just under 1,000 residents.

“We’re planning on expanding the playground,” Lawhorn said. “We want to have some walking trails. We’ve inquired with the county about some property they own up around (Friendsville Elementary School).”

That property could be turned into more park land, something the city’s commissioners discussed Thursday in a public meeting.

But the even bigger picture behind the playground is a parks and recreation system that may emerge in the coming fiscal year.

“We’re starting a parks and rec committee,” Lawhorn said. “It will be stand-alone, Friendsville will be overseeing it.”

He welcomed residents from Blount and Loudon counties to attend once it gets underway.

On the technical end, city leaders recently convened to ponder potential grant funding for the ongoing efforts to make the city more welcoming.

“Down the road it looks like there’s some federal grant money coming, possibly helping us add sidewalks in the city,” Lawhorn said. “Because we want to encourage people to get outside, to move, to be active, to see your neighbors. That’s the kind of lifestyle we’d like to promote down here.”

As COVID-19 vaccines pump the pandemic’s breaks locally, the spirit of community was evidence Saturday as children scrambled over the playground for the first time and neighbors perused the Friendsville Community Market, a weekend event that lasts through the end of September.

Short term, Lawhorn said, the next step in the community-vitalization effort could be to build a pavilion near the playground.

Friendsville Public Relations Coordinator Kim Rogers has been a key organizer, working to see the playground through to completion. In a recent interview, she recalled speaking to residents about a time when Friendsville residents were outside more often — playing in the street, sitting on porches, shopping local businesses. That’s what some want for Friendsville’e future, too.

People had doubts it would happen, she added. But steady fundraising and dedication to seeing the project through are what ultimately brought city leaders and the community to the opening.

The slogan on a new sign outside the playground — accompanied by the silhouette of a charging 19th-century steam locomotive — ties Friendsville’s 2021 thematic identity in a neat bow: “Honoring the past, embracing the present and inspiring the future,” it reads.