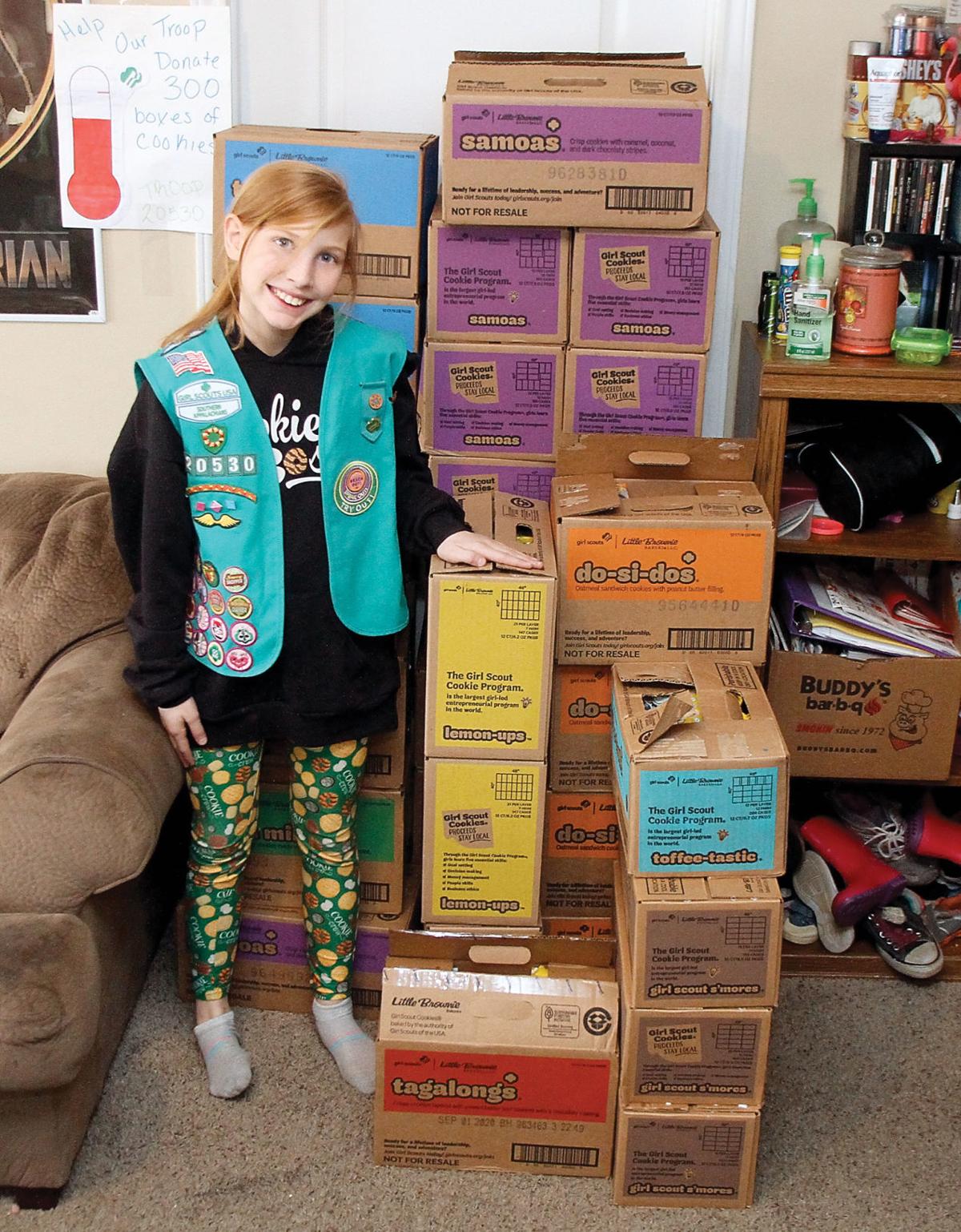 Mackenzie Herron stands with about 400 boxes of cookies of Troop 20530 had left when the Girl Scouts suspended booth sales this week. The Little River Service Unit is helping Blount County troops sell remaining boxes by accepting email orders and distributing them for order delivery or pickup. 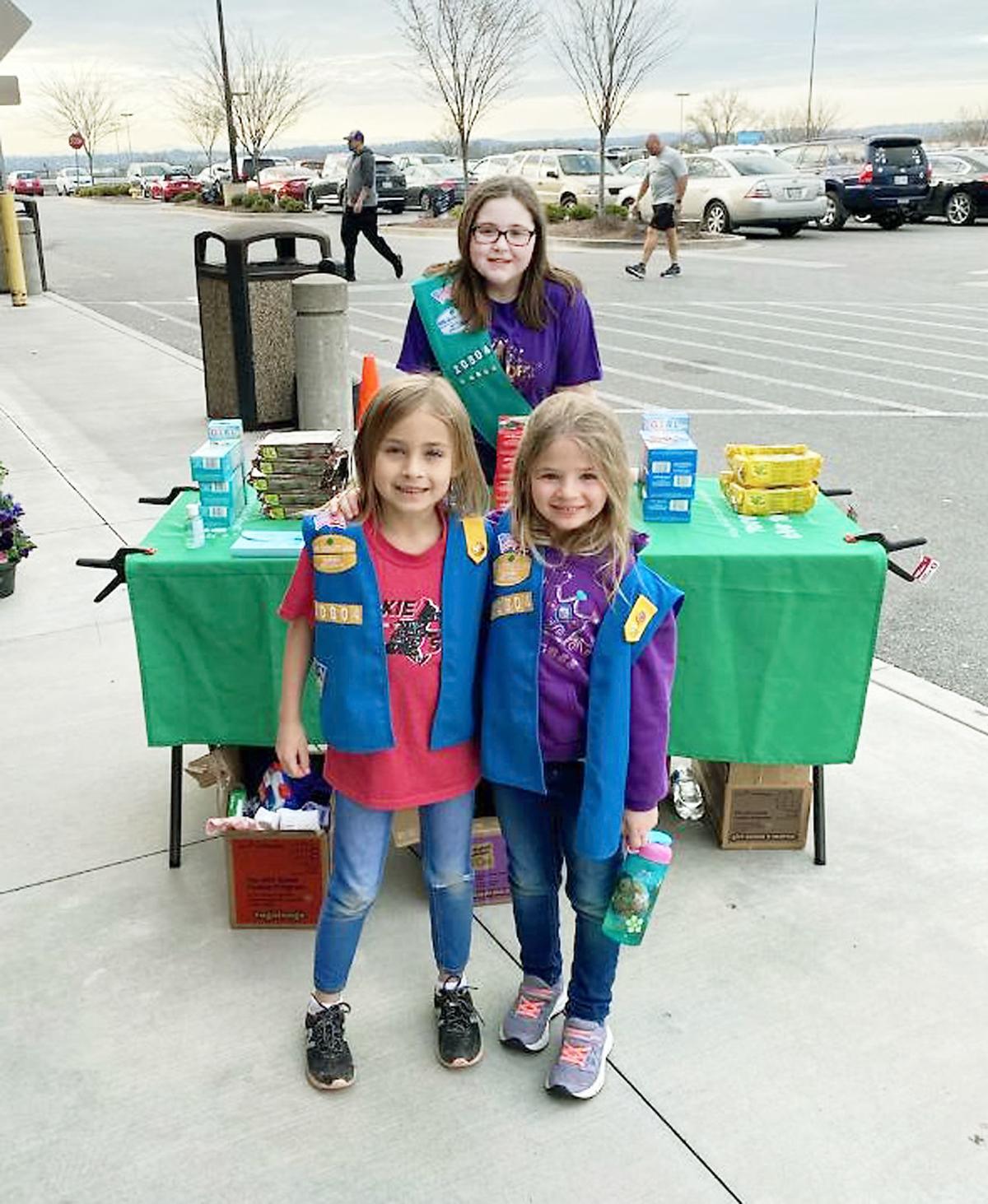 Troop 20804 stands ready at a Girl Scout cookie booth this year with, back row, MacKenna Cook and front from left Hartley Dupree and Maddie McCormack.

Mackenzie Herron stands with about 400 boxes of cookies of Troop 20530 had left when the Girl Scouts suspended booth sales this week. The Little River Service Unit is helping Blount County troops sell remaining boxes by accepting email orders and distributing them for order delivery or pickup.

Troop 20804 stands ready at a Girl Scout cookie booth this year with, back row, MacKenna Cook and front from left Hartley Dupree and Maddie McCormack.

With this week’s early suspension of public cookie booths because of concerns about coronavirus, however, about half the 34 troops have a high number of unsold boxes. For a few, it’s hundreds of boxes for which they are financially responsible, at $4 or $5 each.

To help finish the sales, the Little River Service Unit is stepping in as a clearinghouse for email orders and donations, which it will distribute among the Girl Scout troops to fulfill. “We’re going to be there to help them,” said Sarah Shepherd, product sales manager for the unit.

The fourth- and fifth-graders in Troop 20530 have about 400 boxes left. When leader Samantha Herron picked up the troop’s last order from Shepherd two weeks ago, they had about 20 booths left to work. A dozen were canceled.

“I have a lot of Samoas,” Herron said, and even a few of the gluten free Toffee-tastic. “My five girls were highly motivated,” she said, and if the remaining boxes sell their total will be 5,314. “For five girls, that’s not bad.”

Her daughter Mackenzie remembers one customer who came back seven times to a booth and another who bought a case, 12 boxes. She sold 1,083 boxes this year and is only about 100 away from her goal of 1,250.

Troop 20804 has 350 boxes left after bad weather during some booths and at least four were canceled. During one cold weather booth, the troop sold only about 65 boxes, compared to 150 usually sold at the same location, leader Brianna Cook explained. Last year the troop sold 1,600, and this year’s goal for the six girls ranging from kindergarten to fourth grade is 1,700.

“The girls love doing the booths,” Cook said. “They’re talking to customers. They’re handing the money, with adult supervision.” Her troop even likes to sing and dance while they sell.

Shepherd said leaders decided over the weekend that canceling the booths was the right thing to do, and Herron said when she told her girls, “They understand we have a social responsibility.” After all, part of the Girl Scout Promise is “to help people at all times.”

“We all agree it’s the right decision,” Cook said.

Shepherd explains the split from a $4 box of cookies as roughly $1 to the troop in cash and prizes, $1 for the bakery and $2 for the local council, used for financial aid for girls to be scouts, leader training and to support programs such as Camp Tanasi.

The sales do more than earn money. Troop leaders will tell you they see shy girls become confident talking to strangers, master money handling and learn marketing skills like bundling — pitching five boxes for $20. Cook’s daughter, 9-year-old MacKenna, said she makes friends during the booth sales and, “I’ve learned how to do math.”

“They learn about budgeting and how to save for what they want,” Herron said. Her troop is planning to use its money for a trip to Camp Tanasi in the fall and for new vests, troop numbers and other materials for the girls “bridging” this year from juniors to cadets, the next level of scouts.

Cook’s troop is planning to use a third of its earnings for a sleepover at the Tennessee Aquarium or Zoo Knoxville. One-third will go to savings and another third to a service project, with either animals or an assisted living facility.

After the LRSU’s decision, the council of which it is a member, Girl Scouts of the Southern Appalachians, suspended all public cookie booths but extended cookie sales to April 5.

GSCSA said it is checking the status of cookie inventories in its troops across three states.

“We are coming up with a plan to make sure troops are not burdened with excess inventory and ensure that our girls will still be able to fund their upcoming experiences and activities,” GSCSA CEO Lynne Lawson Fugate wrote in a March 16 announcement.

“The bottom line is, we do not want you to worry or become frustrated about cookies,” her message said. “We’ve already heard some inspiring stories from several troops who are exemplifying Girl Scout ingenuity and spirit and are suggesting customers buy cookies to donate to food banks, hospital workers, and first responders, and they’ve had great success doing so. These go-getters are using their Girl Scout skills to problem solve, take risks, and create new opportunities to help others during this highly unusual time.”

Most troops designate a group to receive donated boxes from buyers who want to support the Girl Scouts without gaining the calories. Many participate in Hugs for Soldiers, which sends cookies to deployed service members.

To order Girl Scout Cookies: Email blountcookies@LRSU.info and include an email address or phone number to arrange delivery or pickup.