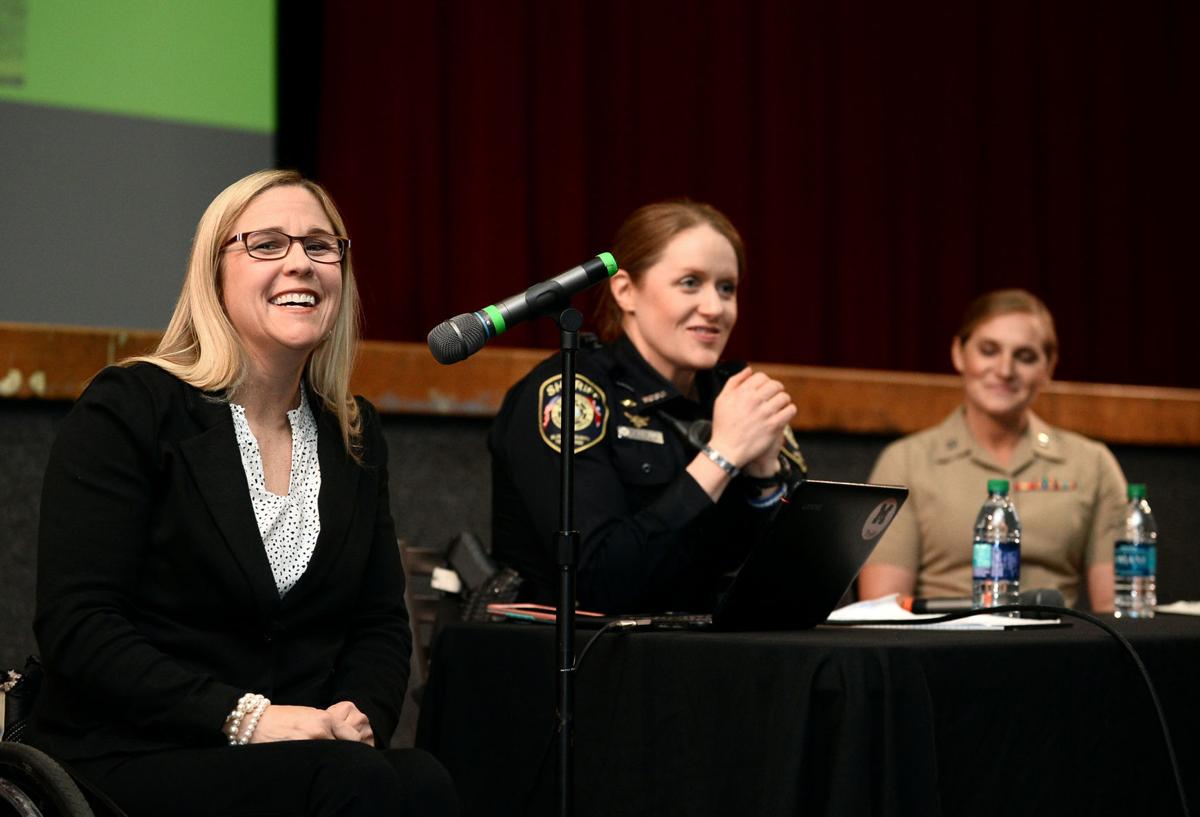 Maryville High School continued its Centennial Speakers Series on Monday with a session titled “Girls with Grit.” The alumnae speakers were (from left) Carly Pearson, Class of 1994; Paige Craig, Class of 2001; and Andrea Stooksbury, Class of 2009. The Class of 2019 will be the 100th to graduate from MHS. 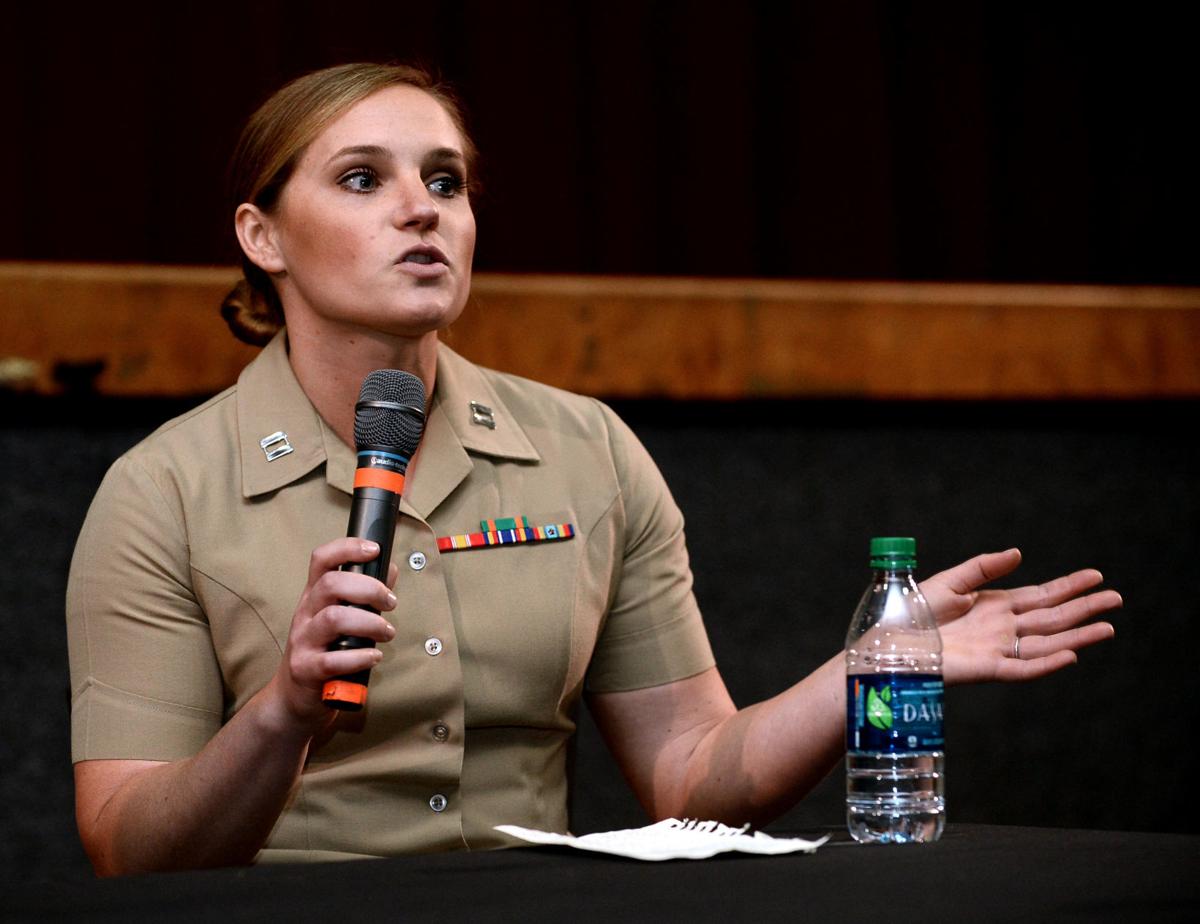 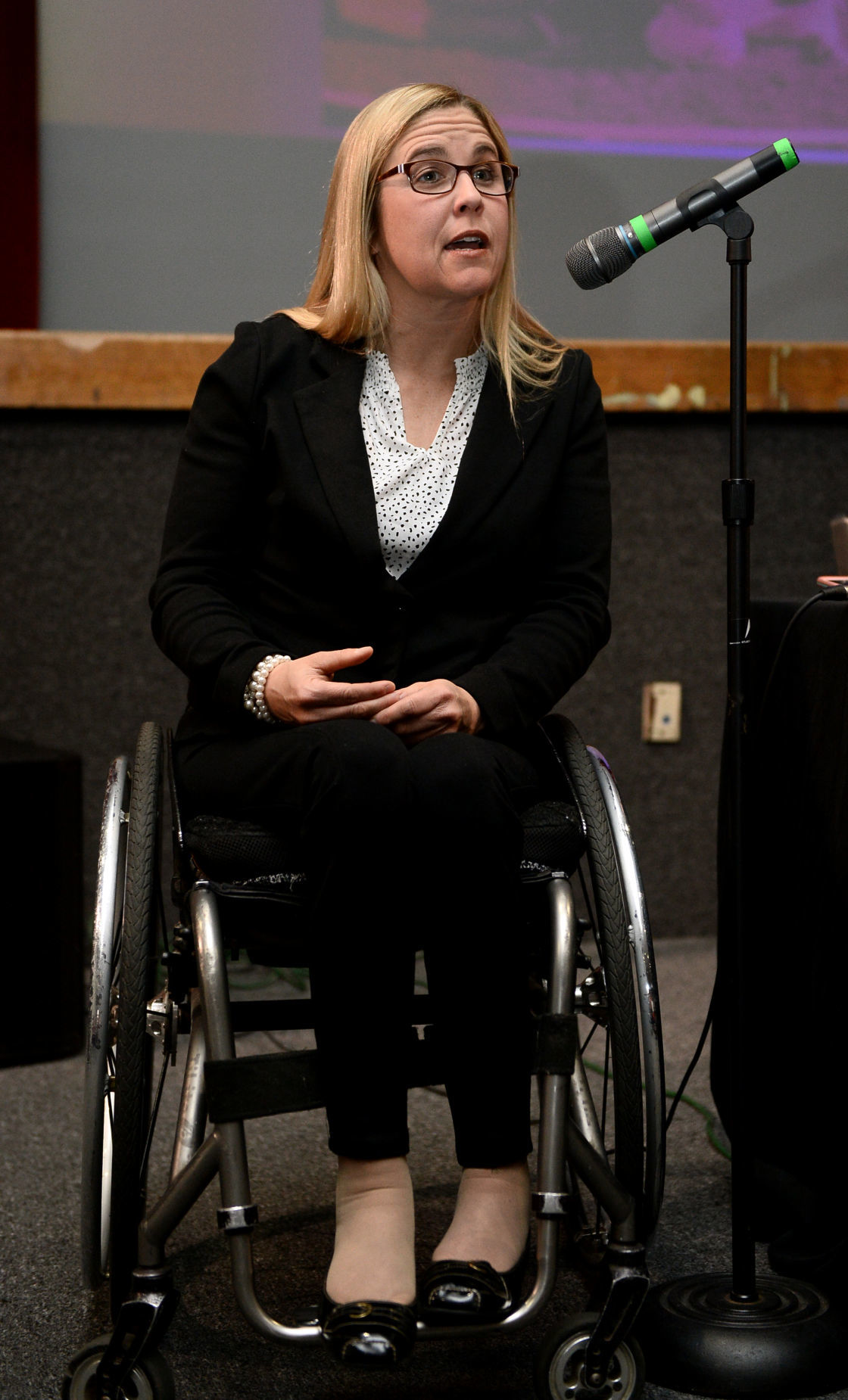 Carly Pearson shares her experience as wildland firefighter, the accident that left her paralyzed from the waist down and her journey to to compete in para-triathlons, para-cycling and now para-climbing during a presentation Monday at Maryville High School. 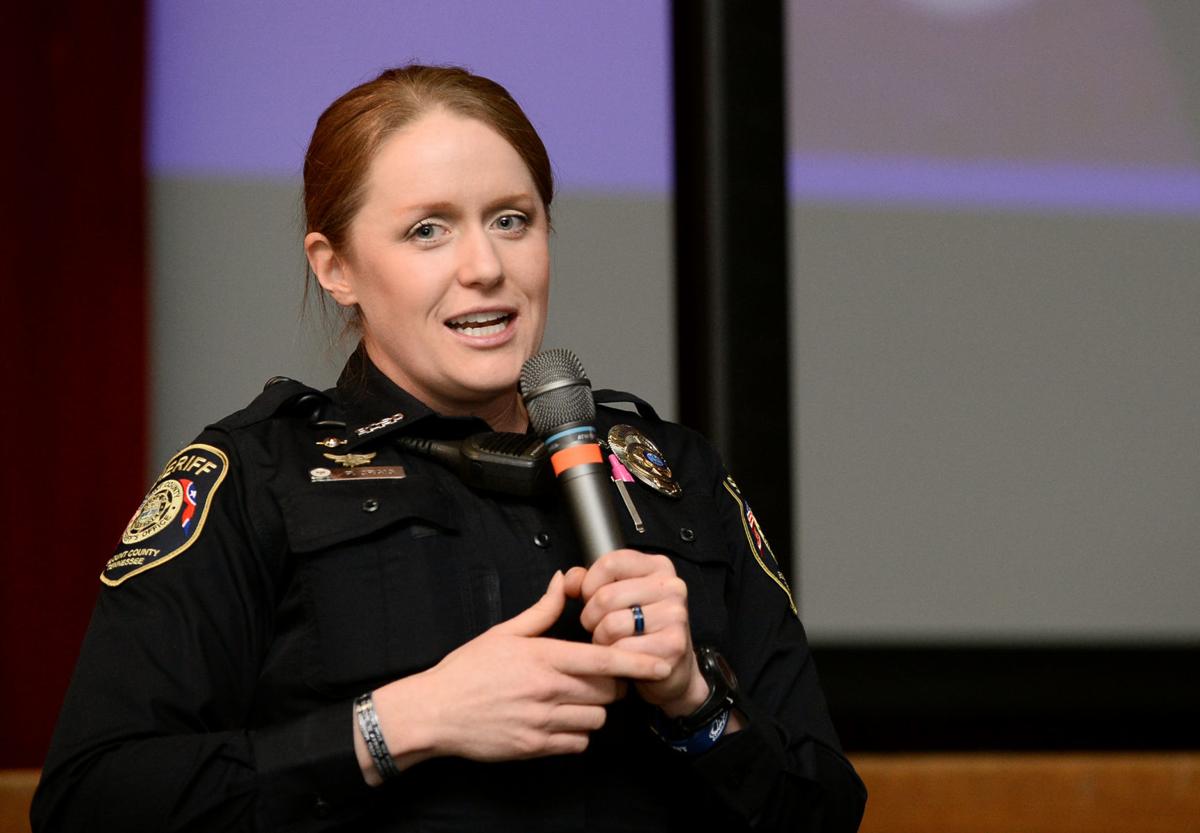 Paige Craig, a reserve deputy with the Blount County Sheriff's Office, tells Maryville High School students Monday about becoming an emergency medical technician and then a member of the BCSO SWAT team. Craig was one of three MHS alumnae featured during a "Girls With Grit" session of the school's Centennial Speakers Series.

Maryville High School continued its Centennial Speakers Series on Monday with a session titled “Girls with Grit.” The alumnae speakers were (from left) Carly Pearson, Class of 1994; Paige Craig, Class of 2001; and Andrea Stooksbury, Class of 2009. The Class of 2019 will be the 100th to graduate from MHS.

Carly Pearson shares her experience as wildland firefighter, the accident that left her paralyzed from the waist down and her journey to to compete in para-triathlons, para-cycling and now para-climbing during a presentation Monday at Maryville High School.

Paige Craig, a reserve deputy with the Blount County Sheriff's Office, tells Maryville High School students Monday about becoming an emergency medical technician and then a member of the BCSO SWAT team. Craig was one of three MHS alumnae featured during a "Girls With Grit" session of the school's Centennial Speakers Series.

One knew exactly the career she wanted after college, another had a college dream and a third didn’t have a clue what to do.

All of their lives took unexpected turns that led them to success, and Monday the three Maryville High School alumnae shared their journeys of perseverance as part of the school’s Centennial Speakers Series in a session titled “Girls With Grit.”

All entered fields dominated by men. As teacher Bill Stooksbury introduced the “women with grit,” he noted that less than 4 percent of firefighters are females, less than 10 percent of law enforcement officers and less than 7 percent of Marine Corps officers.

The three speakers all were student athletes at MHS and credited family members, teachers and coaches for helping them to develop their persistence.

After growing up on a farm, Carly Pearson, Class of 1994, knew she wanted to work outside, and while earning a bachelor’s degree in forestry at the University of Tennessee she discovered a love for wildland firefighting.

“This is the lowest of the low, the dirtiest of the dirty firefighting jobs,” she explained. Walking trails with a heavy pack, she described it as paramilitary.

In 2002, however, while she was in Oregon for a fire she fell down a ravine and into a river, nearly drowning and injuring her spine on the way down. Doctors said she was paralyzed from the waist down and would never walk again.

“This dream life that I had was gone,” Pearson told the students.

She spent two weeks in an intensive care unit and months in rehabilitation learning how to do everything again like a toddler, from rolling over to getting dressed.

Despite the support of family and friends, she said, “I went through a period of despair, guilt, shame, just feeling like I had let everyone down, myself included.”

The day her sister Paige came home and said, “You’re going to the gym with me,” Pearson began a new path.

She worked out at Primo’s Gym and then The Rush, and began water therapy at Springbrook Wellness Center, first with a snorkel and floats until she was strong enough to swim without them.

“One length led to one lap, and then one lap led to five and then five led to a mile,” she said.

Her sister convinced her to do a triathlon.

Over the years Pearson has competed in triathlons, cycling and climbing, winning national championships and silver medals in international competitions.

These days she’s competing with the Knoxville Sled Bears, an adaptive hockey program, and inspiring others with disabilities who may be struggling with depression until they find an outlet through sports.

“Keep challenging yourself,” she told the students.

“Perseverance, persistence and positivity. You keep those three things at the top of your mind, and you’ll be able to achieve whatever your dreams and goals are,” Pearson said.

The youngest of four children, Pearson’s sister Paige Craig told the students she had to be tough. “I got my rear end handed to me by my siblings a lot,” she said.

A member of the MHS Class of 2001, Craig’s dream was to play Division I soccer, but at Middle Tennessee State University she discovered that she didn’t have the skills to compete at that level. “I really wasn’t college material,” she said, but now she sees what happened as divine intervention.

Her change of plans meant that she was home when her sister was recovering from the accident. Her big sister had always been her best friend and role model, but they grew even closer during Pearson’s recovery.

Craig was working two part-time jobs and taking classes at Pellissippi State Community College. “For three months I spent every night at Patricia Neal (Rehabilitation Center) with her,” Craig said.

An invitation from a friend who was a paramedic to ride along in an ambulance led Craig to discover a new path.

“Opportunities cannot just find you,” she told the students, “You have to go looking for it.”

She worked with Rural Metro Ambulance Service for four years, and her favorite calls were the ones with the Blount County Sheriff’s Office.

In 2006 she joined the BCSO, eventually becoming the first female on the Special Weapons and Tactics (SWAT) team. “That team is the best of the best,” she told the students.

Since 2012 she has remained a reserve deputy but manages work and family as a representative for the AdvoCare nutrition company.

“I had no idea what I wanted to do when I graduated from Maryville High School,” confessed Andrea Stooksbury, whose father introduced the speakers.

The only idea she had when she graduated a decade ago was that she wanted to go to California.

Her father had been a Marine, and her parents encouraged her to attend the U.S. Naval Academy.

At the end of the first semester she was struggling in her classes and exhausted, which she assumed was from taking 20 credits and swimming 20 hours a week. After discovering she had an autoimmune disorder, she received treatment and determined to give the academy another year.

She took advantage of opportunities such as the National Outdoor Leadership School and set her sights on aviation but discovered at the end of her junior year that she was medically disqualified from flying.

A decision to join the Marines led to six more months of intense training, which Stooksbury said involved digging a lot of holes in all sorts of weather.

“We were pushing ourselves further than I thought was humanly possible,” she said.

Stooksbury also came to appreciate the camaraderie of the Marines, discovering that their intense attitude is grounded in working hard and caring about others.

As an intelligence officer she was deployed to Okinawa, Japan, and served throughout the Pacific. Then she became an intelligence operations officer in counterterrorism with the Marine Cryptologic Support Battalion.

Putting yourself in uncomfortable situations is the best place to grow, Stooksbury told the students.

She still hasn’t made it to California, but next month Stooksbury is scheduled to deploy to Iraq.