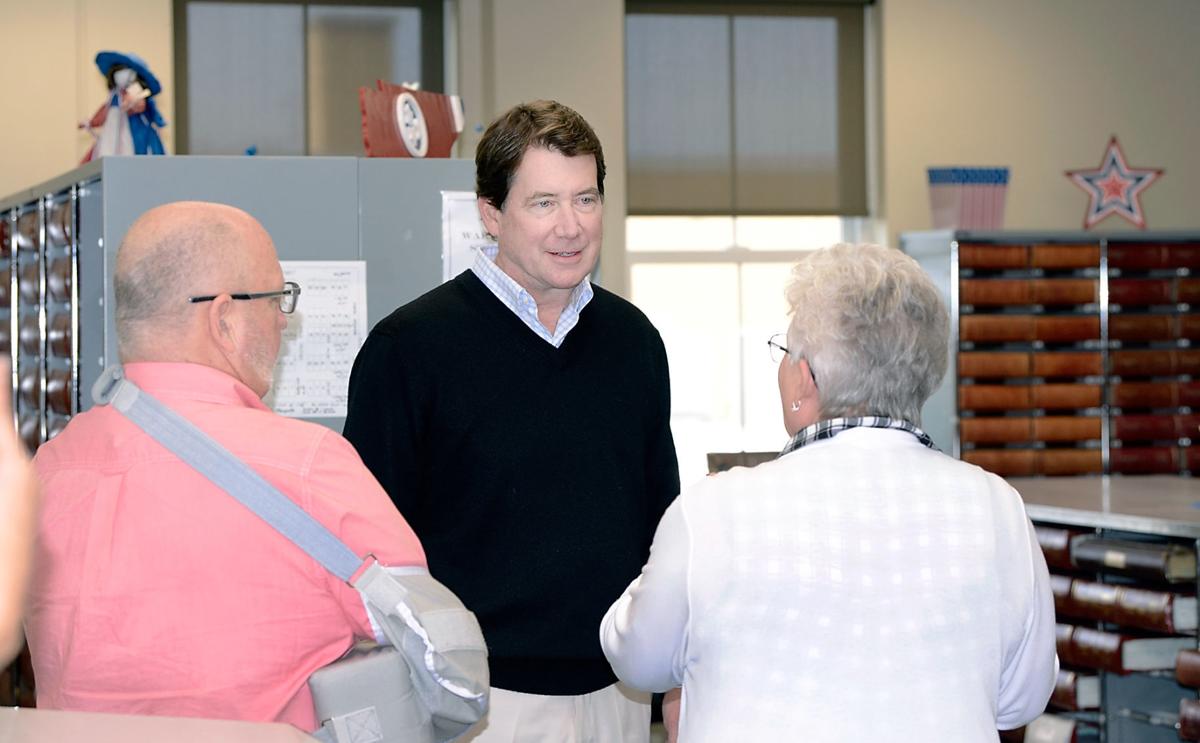 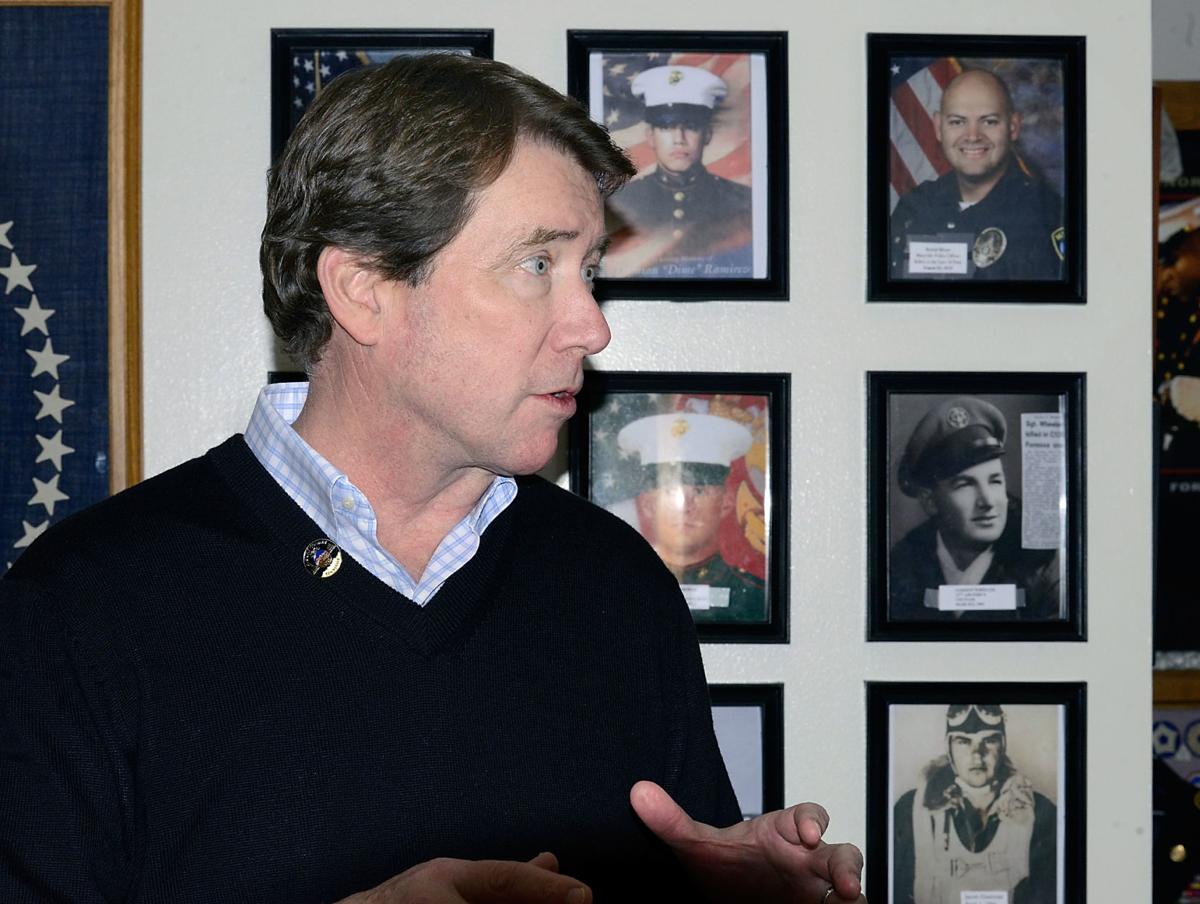 Former Ambassador to Japan Bill Hagerty stopped by the Blount County Veterans Affairs Office, where he talked with Director Nathan Weinbaum in the courthouse on Monday. 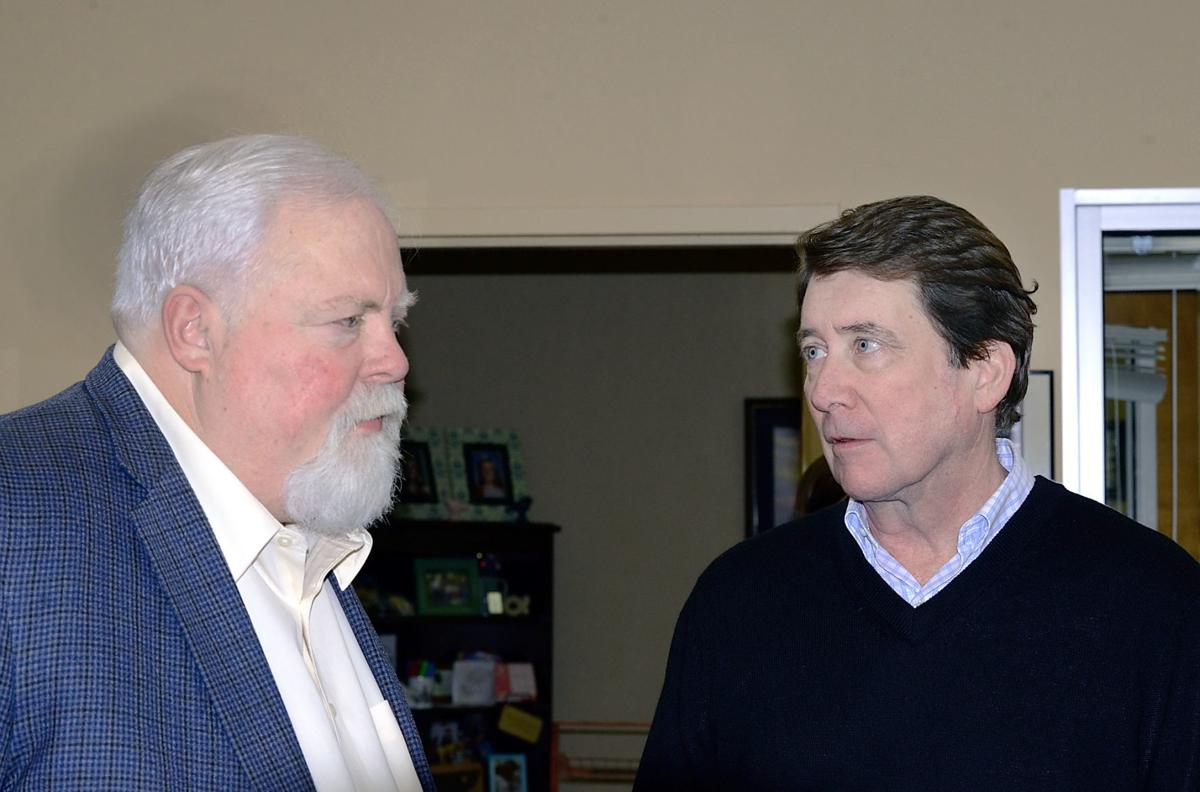 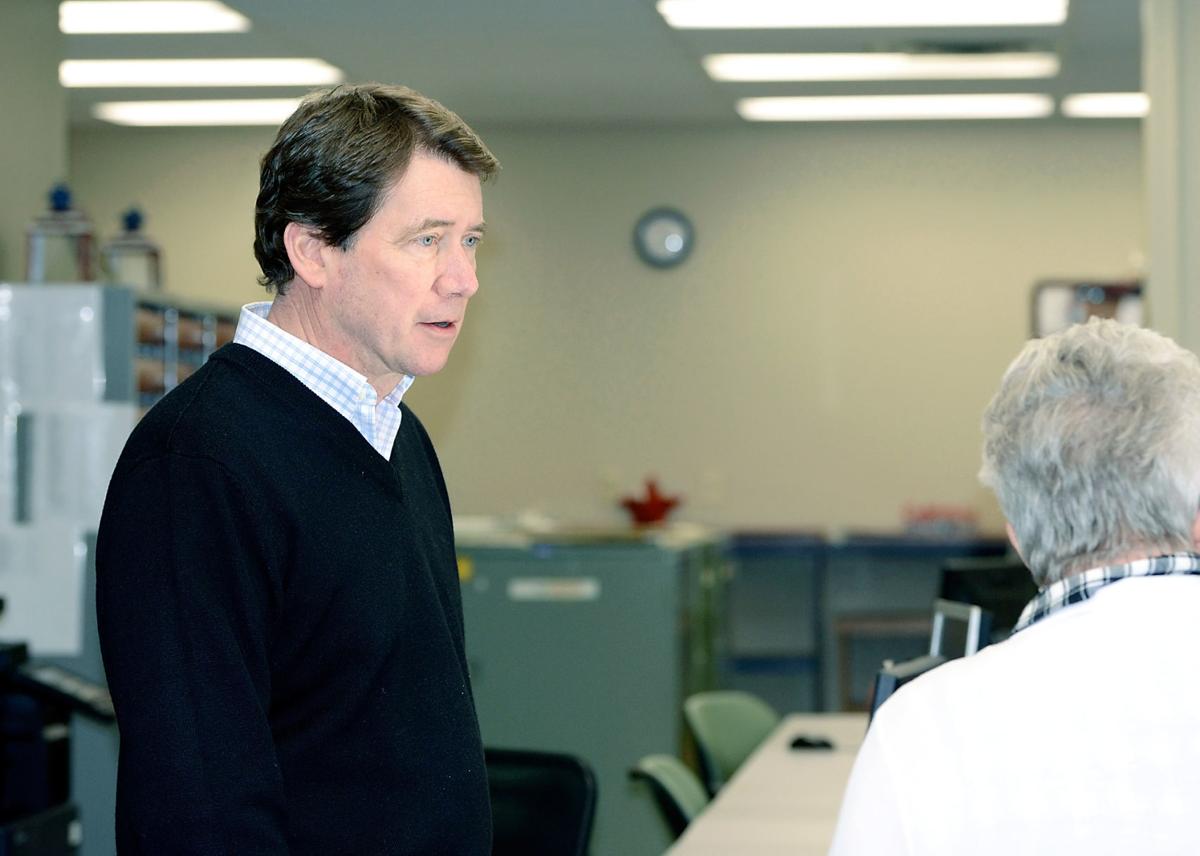 Former Ambassador to Japan Bill Hagerty visits with staff at the Blount County Courthouse on Monday afternoon. Hagerty is running for the U.S. Senate seat held by Sen. Lamar Alexander, who is retiring.

Former Ambassador to Japan Bill Hagerty stopped by the Blount County Veterans Affairs Office, where he talked with Director Nathan Weinbaum in the courthouse on Monday.

Former Ambassador to Japan Bill Hagerty visits with staff at the Blount County Courthouse on Monday afternoon. Hagerty is running for the U.S. Senate seat held by Sen. Lamar Alexander, who is retiring.

Bill Hagerty leaves no doubt about the issues that drive his campaign to assume the seat of U.S. Sen. Lamar Alexander. Tennessee’s senior senator, a Maryville native, will retire at the end of his fourth term on Jan. 3, 2021.

On Monday, Hagerty, a native of Gallatin, was escorted through the Blount County Courthouse by fellow Republican Circuit Court Clerk Tom Hatcher. They visited the Mayor’s Office, Trustee’s Office, Property Assessor’s Office and the offices of Veteran Affairs and of the finance director. Most of the conversation as Hagerty was introduced to officials and staff was courteous banter of the nice-to-meet-you variety.

As for the issues? Go to Hagerty’s Senate race website and up pops a box that includes a photograph of him with President Donald Trump under the heading, “Build the Wall.” The campaign themes are familiar.

It was Register of Deeds Phyllis Crisp who got down to cases with candidate Hagerty, who returned to Tennessee from his position as Ambassador to Japan to run for the Senate.

Crisp asked, “What’s some of your top priorities?”

“Immigration and getting the wall sorted out,” Hagerty said. “I talked to the sheriffs. I talked to people about the heroin, the methamphetamine that’s coming in from outside. My brother-in-law spent a year in law enforcement in California, and they’ve got it a lot worse out there.”

It was Trump who announced on July 12 Hagerty’s Senate campaign while Hagerty was still in Japan.

“I think that’s the first time in history to have the president announce a campaign before the candidate,” Hagerty said, as he wound up his courthouse tour before heading for Sevier County to meet with the Chamber of Commerce there.

“I think what that reflects is the confidence (Trump) has, and the need that he has for an ally serving in the Senate. I think he felt like I did a tremendous job for the United States of America serving as our ambassador to Japan, but right now he needs me to come back, and come back to the U.S. Senate,” Hagerty said.

“He knew where my heart was. He and I talked about it on a number of occasions about whether I should do this, and I think the president felt very strongly, obviously, that it would be a good thing to do, and I think for the people of Tennessee,” Hagerty said.

He went on to echo other campaign themes of the president.

“He knew I would stand with him not only for the borders, but I’ll stand strong for the Second Amendment, for life, for constitutionalist judges on the bench, and stand up for the men and women in the military and our veterans.”

Hagerty’s strongest tie to Blount may be through its largest employer, DENSO Inc. He is familiar with the Japanese-based manufacturer of automobile components, having been a former Tennessee commissioner of economic and community development before being tapped by the president to be ambassador.

“I would have first learned about DENSO back in the late 1980s. That’s when I was in Japan working for an international firm, and DENSO and Toyota were part of the same corporate family. So I’ve been fully aware of DENSO for many decades,” he said.

It was years later, in January 2011, that then-Gov. Bill Haslam selected Hagerty for the commissioner position.

“That was a time when Tennessee’s unemployment rate was above the national average, and we restructured our department. We decentralized the management structure so that we put our team in the field, closer to where the community is, closer to companies that need people,” he said.

Getting closer to companies led him to travel more, taking a tack in Tennessee pioneered by the man who holds the Senate seat Hagerty now seeks — Alexander. It was the Maryville native who ventured to Japan, resulting in Nissan and DENSO expanding into the state under his watch as Tennessee governor.

“I began to travel more and work hard on getting more foreign direct investment into the state of Tennessee,” Hagerty said. “And Japan was by far the No. 1 investor when I was doing my job. In fact, two of the years I did it, the state of Tennessee was the No. 1 creator of jobs through foreign direct in the entire United States. And 60% of that, more than all the others combined, came from one country, Japan.”

“President Trump met the president and CEO of DENSO in my residence in Japan. We’ve got a great relationship with DENSO and I worked very hard to extend that relationship, make it stronger and better. This $1 billion investment that they’re making (at DENSO Manufacturing Tennessee in Maryville) is going to be a huge boost to the economy of East Tennessee.”

The state primary election is Aug. 6 and the general election is Nov. 3. Hagerty’s campaign plans to stop in Knoxville today.