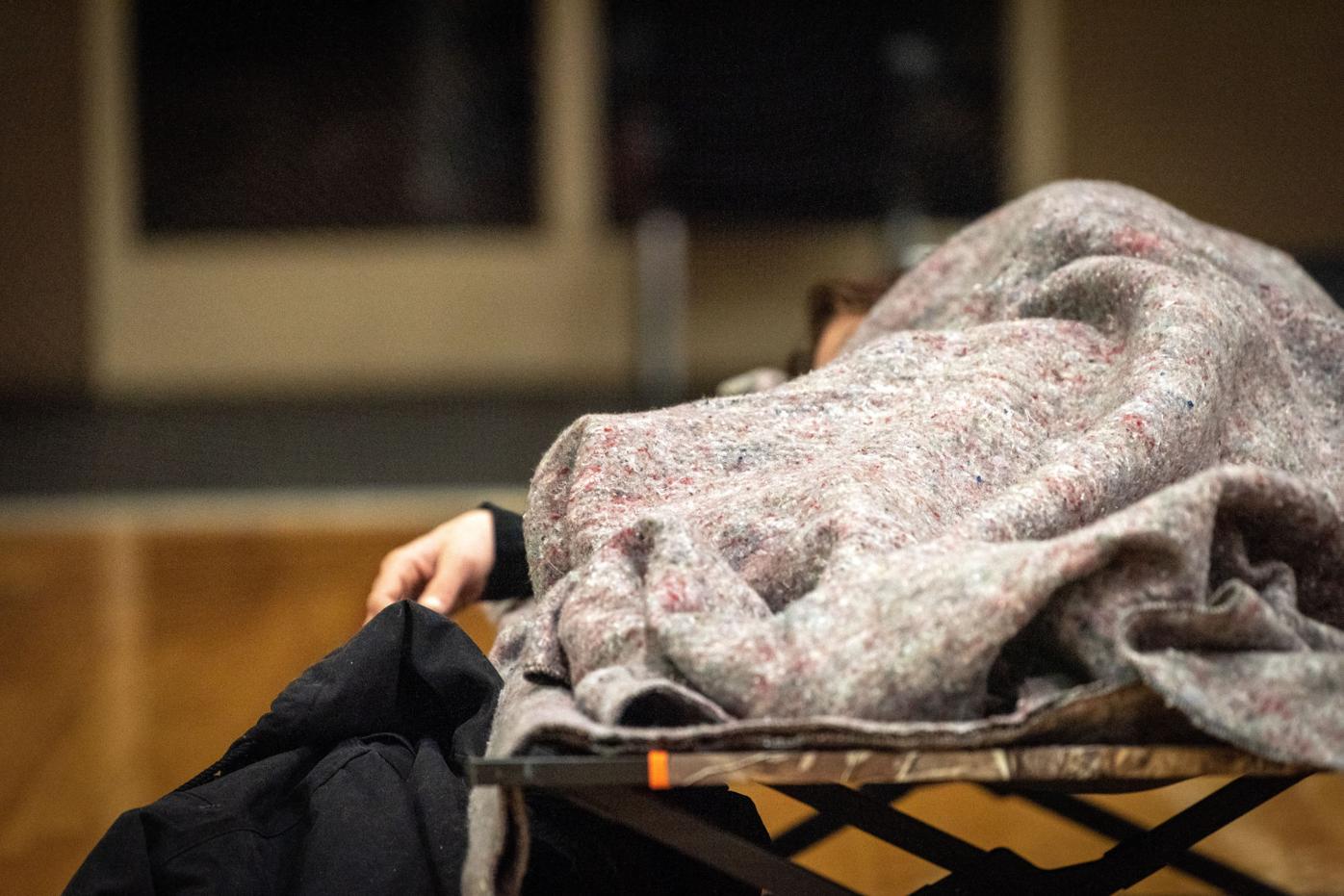 A homeless person is shown in this February 2019 photo at Maryville’s warming shelter, where wool blankets and cots are provided when temperatures drop to 25 degrees Fahrenheit. 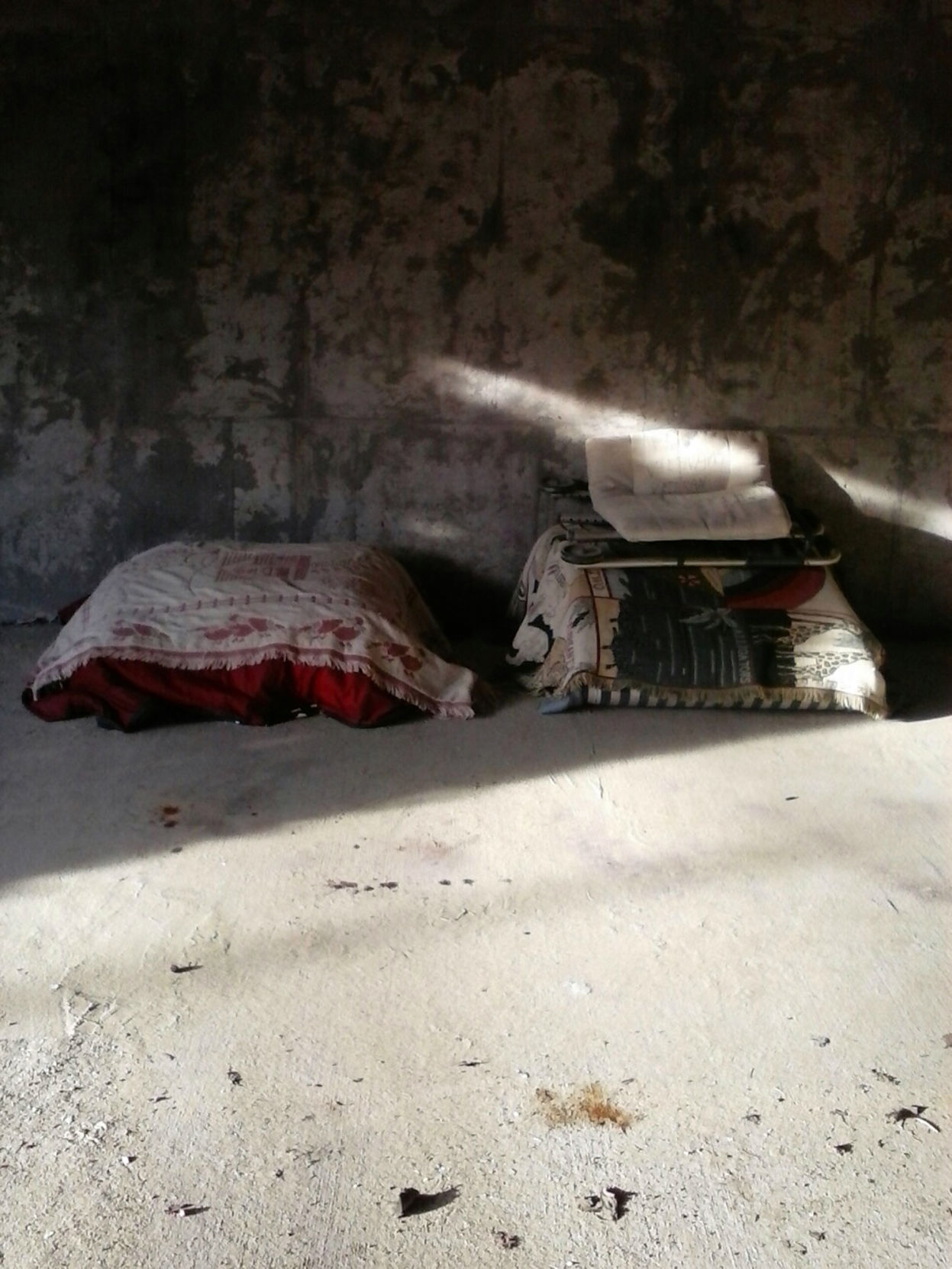 James Digby and son, Shane Digby, lived at this homeless camp in the Ruby Tuesday parking lot for about a year. This photo was taken in 2017. 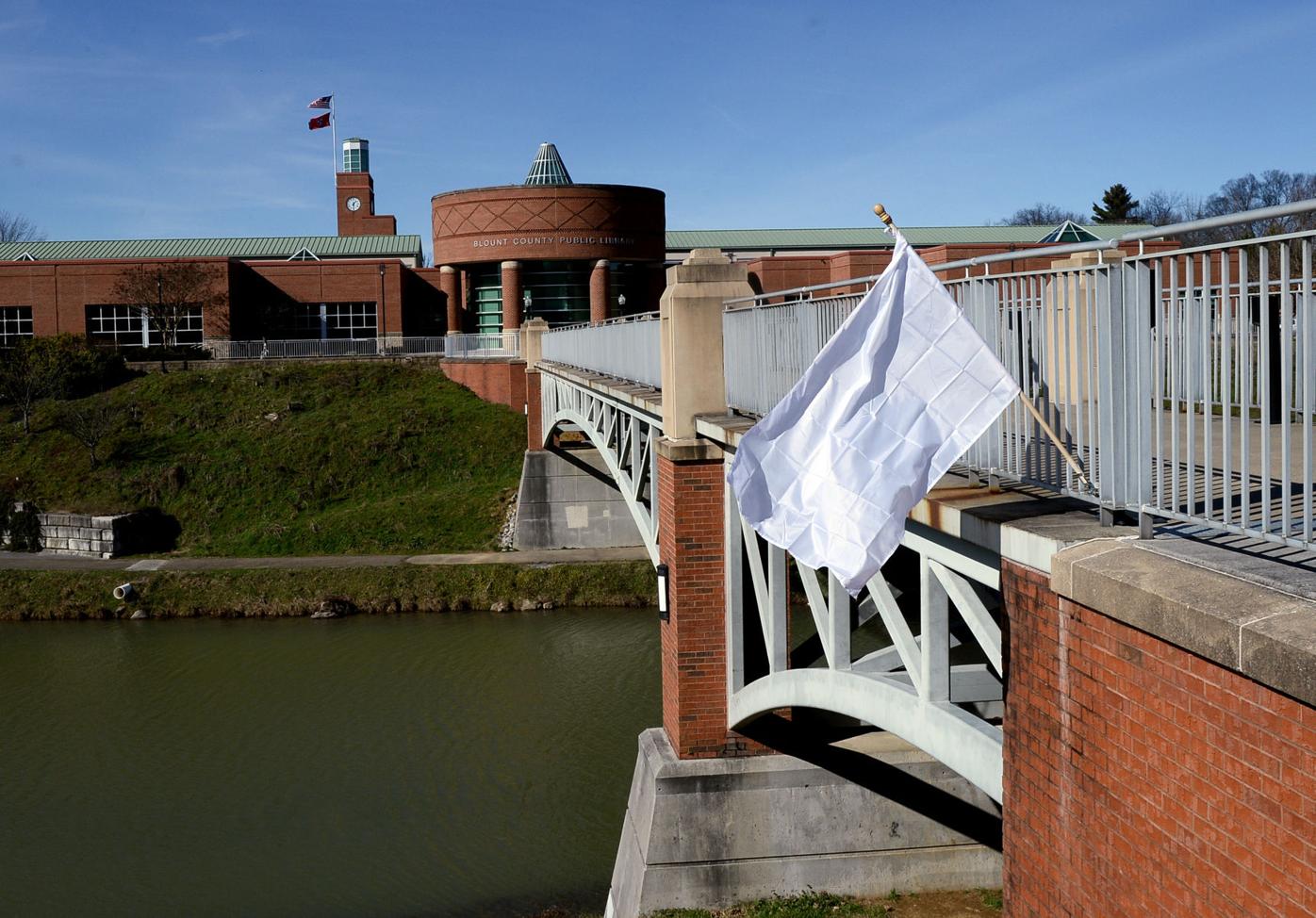 A white flag placed on the pedestrian bridge to the Blount County Public Library indicates a safe, warm place is open for the homeless at a warming shelter at First Baptist Church, Maryville.

A homeless person is shown in this February 2019 photo at Maryville’s warming shelter, where wool blankets and cots are provided when temperatures drop to 25 degrees Fahrenheit.

James Digby and son, Shane Digby, lived at this homeless camp in the Ruby Tuesday parking lot for about a year. This photo was taken in 2017.

A white flag placed on the pedestrian bridge to the Blount County Public Library indicates a safe, warm place is open for the homeless at a warming shelter at First Baptist Church, Maryville.

Counting homeless people under the best of circumstances is a nearly impossible task, officials say, but new numbers — even if lower than the reality — show a startling increase in Blount County from 125 homeless in 2019 to 222 last week.

Documenting the homeless now is required biennially of Blount County and other locales to make their cases for federal funding of programs that serve homeless people.

The so-called “Point-in-Time Count” was conducted Jan. 18-22 in Blount County by United Way and such agencies as Haven House, Family Promise, Good Neighbors, Welcome Table, The Promise Outreach, McNabb Center, A Place to Stay and family resource centers in the local school systems.

The U.S. Department of Housing and Urban Development requires the PIT Count every other year, said Lisa Atkinson, community resource coordinator for Blount County United Way. The increase from 125 to 222 homeless people over two years breaks down to 30 children, 160 adults and 32 seniors, according to data provided by Atkinson.

Among those, 188 were White and 14 Black, although race was not a required question on the survey. The number who reported they are homeless for the first time was 37 last week, down from 44 back in 2019.

Blount County’s homeless population counted last week also included four veterans. Fifty-eight of the individuals were unsheltered, while 57 were listed as sheltered — in places like Family Promise, Haven House and Heaven Sent Home. Twenty-two people said they were relying on friends to give them a place to sleep.

In addition to counting schoolchildren known to be homeless along with families staying in shelters or put up in motels, there are outreach ministries in Blount County familiar with where some homeless encampments are located.

But there is no way to know where all the encampments are, Atkinson said, adding that there are likely multiple smaller encampments as opposed to larger ones due to Blount’s rural nature.

She and others suspect there are more than 222 homeless people living in Blount County.

“We feel like we are undercounting,” Atkinson said. “Things like weather factor in when you are trying to do a count. It is easy to see the people with their shopping carts or the gentleman who is always parked at the library with his car loaded down, or even the people who are camped behind Brown’s Creek. But living in a rural area, there are so many places.”

Including abandoned buildings and beneath bridges, she explained, “there are so many nooks and crannies of where they could be.”

It snowed in 2016, creating problems for an accurate count. That year, there were 166 homeless people. Three years ago, the number was 284.

Blount and 12 other counties report their numbers each year to Tennessee Valley Coalition for the Homeless. The nonprofit headquartered in Anderson County sends the date from all 13 of its counties to HUD and other federal agencies that dispense grants and other funding for homeless populations.

Julie McGorty, CEO for TVCH, said getting accurate homeless counts is extremely difficult. Teams go out to various locations where encampments are located, along with places like 24-hour retail store parking lots, greenway trails, etc. They also take with them hygiene products, blankets, water and other supplies to hand out.

“A lot of families don’t want to talk to you,” she said. “There are families afraid their children will be taken away from them. Illegal immigrants are afraid we are with ICE (U.S. Immigration and Customs Enforcement) and they will be deported or arrested. It is very difficult. This is not an accurate count.”

As the lead agency for HUD’s Continuum of Care Program for the 13 counties, TVHC disperses the numbers back into the communities so they will know what types of funding to apply for. The information is placed into a database called the Homeless Management Information System so that services provided can be monitored. All of the nonprofits that serve the homeless, such as Family Promise or Haven House, use this system.

Caroline Lamar serves as executive director for Family Promise. She said her agency is currently providing housing for 21 people, including parents and their children. Some of them are in FP’s transitional housing program and some are in apartments being used as shelters in the pandemic.

In normal circumstances, FP would have families in its emergency shelter program, in which they stay in local churches, but that has been suspended due to the coronavirus. Lamar said she is confident it can reopen by summer at the latest.

In 2018, Family Promise provided shelter and transitional housing for 148 people; in 2020 that number was 77, down due to the pandemic and shutdown of the emergency shelter program. There is currently a waitlist to get in.

Lamar said she has talked to those who have lost jobs due to the pandemic, but it’s not the only reason people end up homeless — an estimated 30% of her organization’s calls were from people now homeless because of COVID-related issues.

Atkinson knows the 2021 count is exactly as it advertises, a point-in-time count. It is a number arrived at during one week in January when it’s cold and the homeless population can make itself invisible if it chooses. But officials still count, she said, and it does offer a glimpse of what’s going on.

“This is just a snapshot of what homelessness looks like in Blount County,” Atkinson said. “It is really just a point in time. At any other point in time, the numbers could be more or less.”

While it is not known just how many of these 222 homeless people are without a place to live because of lost jobs or reduced hours due to the pandemic, there is a sense it has had an effect. Once the moratorium on evictions is lifted, the number could climb higher, Atkinson said.

The McNabb Center reported in late summer it had seen a 40% increase in homeless services.

For members of this community who want to help ease the burdens of homelessness, Atkinson suggested getting plugged into one of the many agencies that provide services. There are ministries inside local churches that also support nonprofits’ efforts.

While United Way does not receive any federal money, some nonprofits they serve do qualify for federal grants. United Way provides financial support to Family Promise, McNabb Center, Good Neighbors and Haven House.

A new nonprofit, A Place to Stay, is applying for United Way funding. It is just getting off the ground with office space at the Blount County Public Library. It will join the network of other agencies whose mission is to serve the needs of the homeless and help them find affordable housing.

“It is not illegal to be homeless, but it is an unfortunate circumstance that could happen to many of us,” Atkinson said.

Lamar said she, too, believes the 222 count is too low. She said the “hidden homeless” are hard to count, including those with relatives or precariously housed in hotels.

“The high number for 2021 also tells me this crisis isn’t going away and we need to allocate community resources and funds to address it,” Lamar said.

McGorty fears the real problems will surface months from now when the moratorium on evictions is set to expire — at the end of March. Those who find themselves months behind on rent will have few options, she said.

“We are going to have such a surge in homelessness,” she predicts. “It is going to be quite startling to a lot of people.”