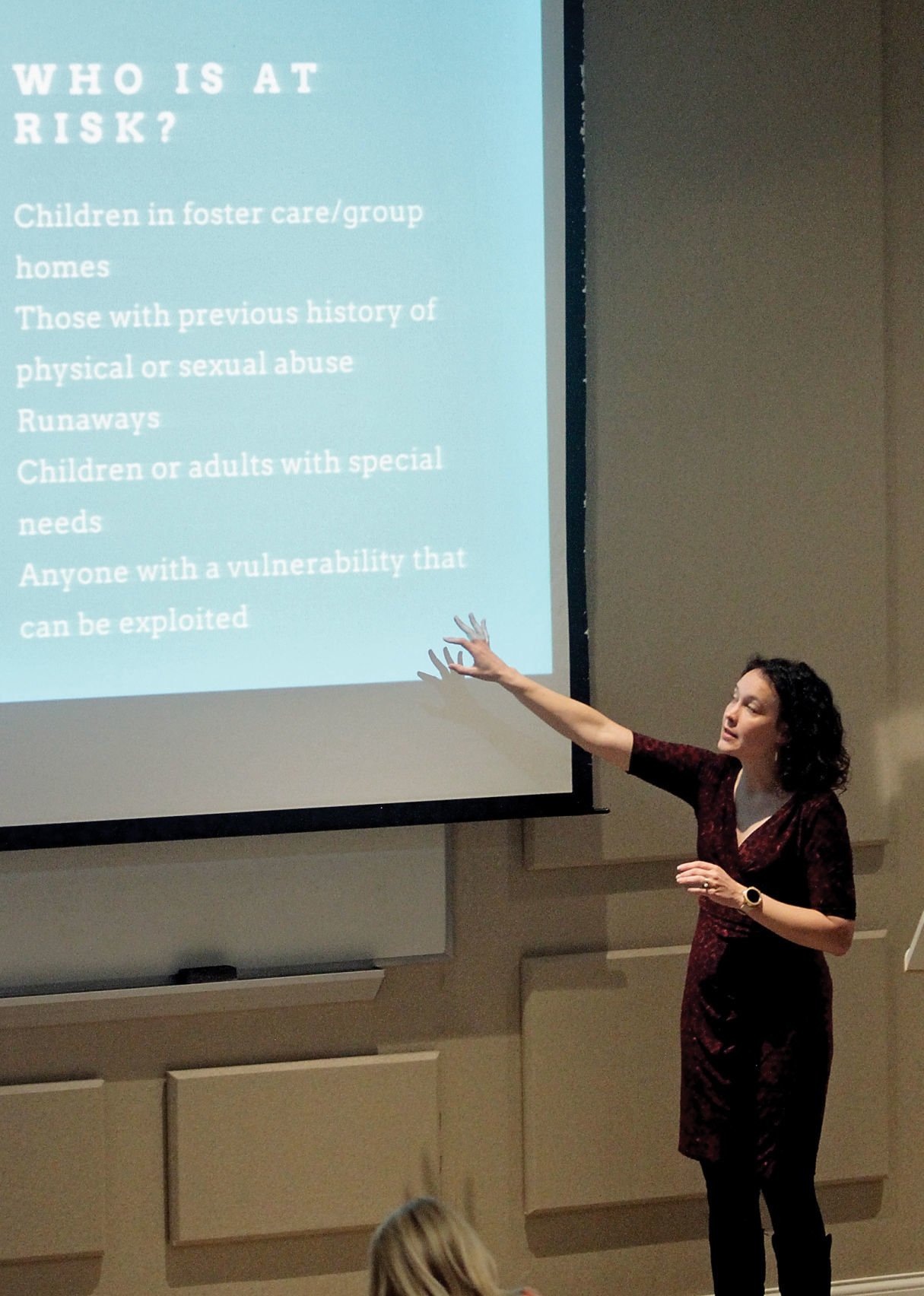 Natalie Ivey, with the Community Coalition Against Human Trafficking, talks about who is at risk for human trafficking during an event held Monday at Maryville College by New Hope — Blount County Children’s Advocacy Center. 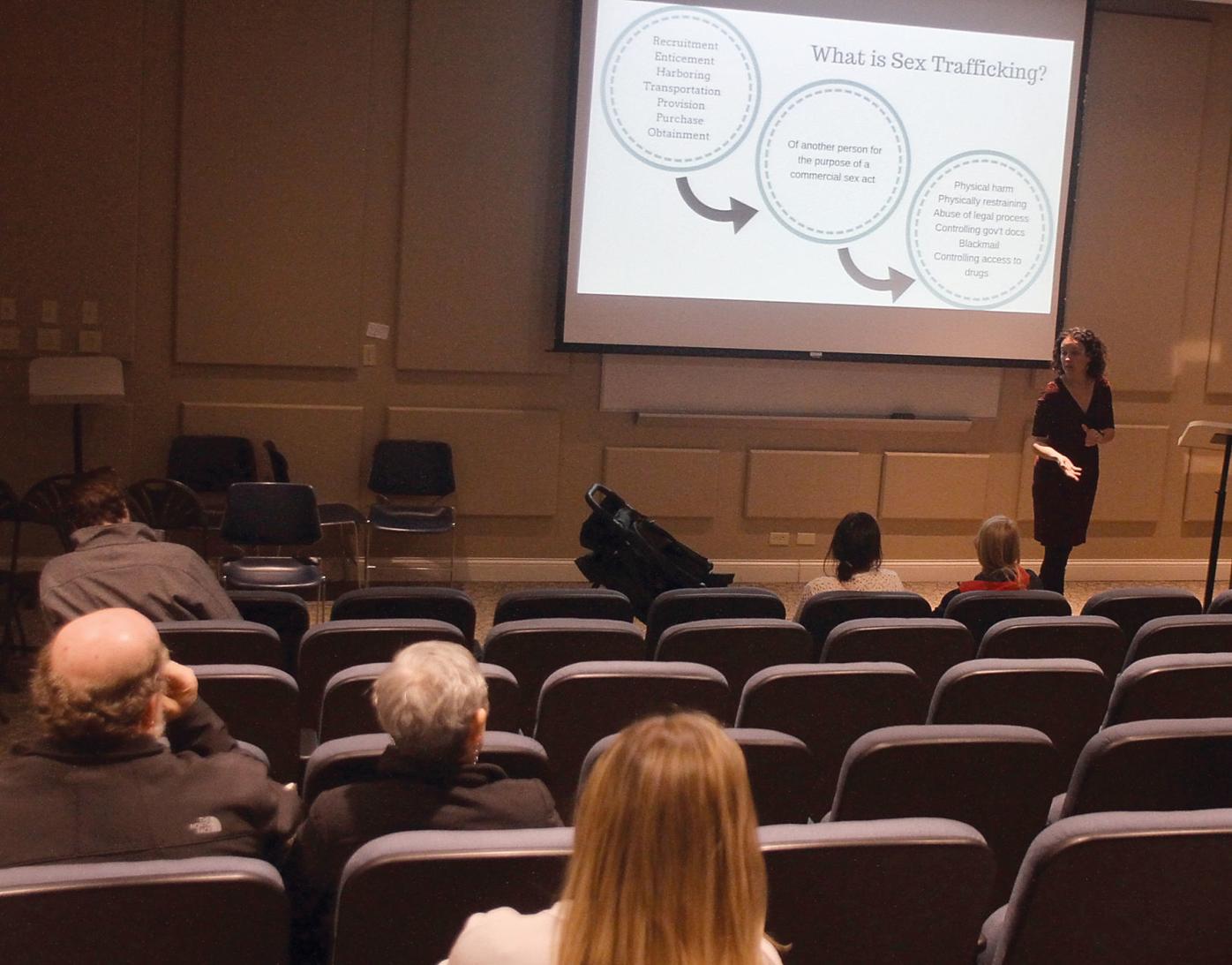 Natalie Ivey, with the Community Coalition Against Human Trafficking, talks about how traffickers operate during an awareness event held Friday at Maryville College and sponsored by New Hope – Blount County Children’s Advocacy Center.

Natalie Ivey, with the Community Coalition Against Human Trafficking, talks about who is at risk for human trafficking during an event held Monday at Maryville College by New Hope — Blount County Children’s Advocacy Center.

Natalie Ivey, with the Community Coalition Against Human Trafficking, talks about how traffickers operate during an awareness event held Friday at Maryville College and sponsored by New Hope – Blount County Children’s Advocacy Center.

An event at Maryville College Monday evening was part of a statewide initiative to combat something many may not know even existed: human trafficking.

Two speakers were slated to present but only one could show. Natalie Ivey, with the Community Coalition Against Human Trafficking, briefed the 20 in attendance on how to identify and combat trafficking in East Tennessee.

The other scheduled speaker, TBI Agent Jamasena Walker, could not be at the session because she was called to an investigation. By her absence, the agent demonstrated the need for the training event sponsored by New Hope – Blount County’s Child Advocacy Center, and held at Maryville College.

It was left to Ivey to deliver the message.

“In my opinion, one of the best things we have is a community that cares on a grassroots level,” Ivey said after the presentation. “When we have a survivor who has needs ... we’ll use social media to let folks know what those needs are and those needs will be met. We’ll literally be overrun with donations.”

Ivey said reactions like these are important because many victims have been marginalized. The outpouring has manifested not only in donations but in the response to trainings like the ones CCAHP does all over the state. After an educational seminar like this one, Ivey said, reports of potential human trafficking situations increase exponentially.

“On a logistical scale we are coordinating multidisciplinary teams,” Ivey said, noting that the program Fostering Resiliency through Empowerment and Education Knox (FREE Knox) gets communities together to talk about human trafficking incidents and response methods.

Much of the sobering information Ivey shared during the presentation focused around definitions of trafficking and ways to be aware of it. She divided these into two specific designations: sex trafficking and labor trafficking. Research Ivey showed on the sordid industry indicates rising levels of trafficking throughout the U.S. with a heavy cluster of incidents in Tennessee.

Ivey said trafficking in the East Tennessee area may be difficult to detect. “We know if fifty dollars has been exchanged for a sex act, we know an exchange has occurred.” But it’s harder to see in instances of familial exchange. She gave the example of a parent bartering a child to a landlord for abuse in exchange for a cut in rent.

Ivey further explained that trafficking, especially when involving children, may not be easy to identify when victims refer to their abusers as boyfriends or even husbands.

“Disclosures from minors when it relates to trafficking may not sound like, ‘Hey, I got trafficked last night.’” Rather, she said, the distinctions are more subtle, which is why training sessions are significant. “It’s going to sound consensual.”

The presentation also identified trafficking variations ranging from parental mistreatment to a burgeoning online world where things like sexting could easily turn into pressure for exchange.

“Often times we talk about this like planting a seed,” said Ivey, speaking of educational events like the one at the college. “Sometimes it’s hard to truly relate the cause and effect of what we see as far as referrals go.”

Two of three New Hope events later this month plan to discuss the world of “digital natives,” kids who have never known a world outside of social media sharing.

Just before Monday’s meeting at Maryville College, TBI released a public statement that a Kingsport man had been arrested during an undercover human trafficking operation conducted with the Knox County Sheriff’s Office.

Education and enforcement on the same night.