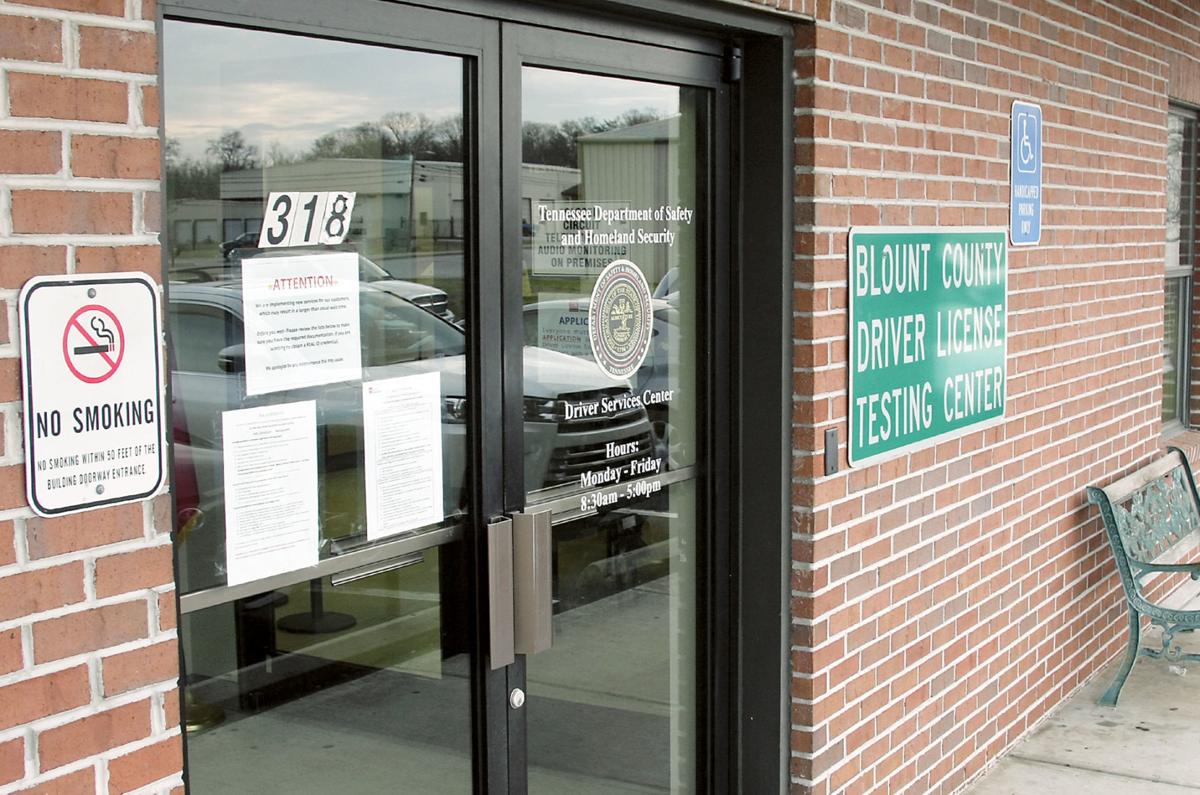 The Driver Services Center in Maryville has already been busy processing Tennesseans’ applications for the REAL ID which will be required for boarding all commercial flights come Oct. 1 of 2020. The office has already 10,557 people for the new license. 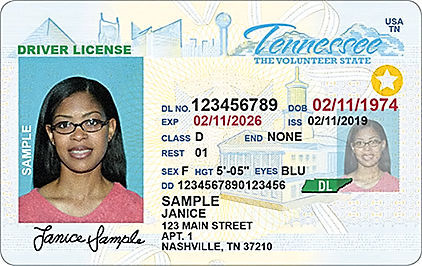 How will the Tennessee REAL ID license look different from the current version? This sample image from The Tennessee Department of Safety & Homeland Security shows the distinct yellow star that will grace the new license. 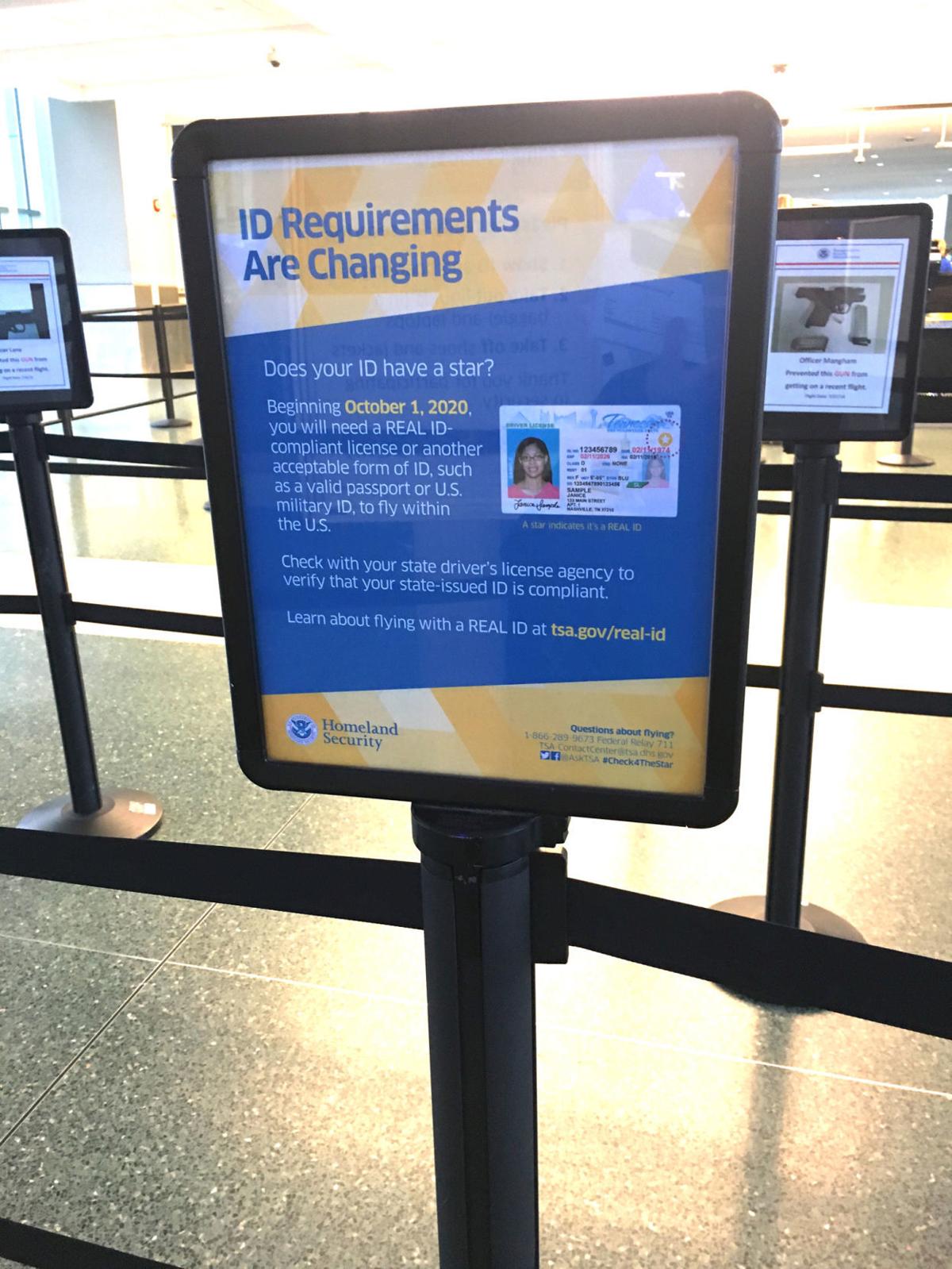 A sign at McGhee Tyson Airport is just a precursor to a campaign the airport has planned for 2020 where they will push out more information about the need for fliers to get a REAL ID license before Oct. 1.

The Driver Services Center in Maryville has already been busy processing Tennesseans’ applications for the REAL ID which will be required for boarding all commercial flights come Oct. 1 of 2020. The office has already 10,557 people for the new license.

How will the Tennessee REAL ID license look different from the current version? This sample image from The Tennessee Department of Safety & Homeland Security shows the distinct yellow star that will grace the new license.

A sign at McGhee Tyson Airport is just a precursor to a campaign the airport has planned for 2020 where they will push out more information about the need for fliers to get a REAL ID license before Oct. 1.

Come Oct. 1 of 2020, Tennesseans — along with most of the U.S. — will need a different type of driver's license called a REAL ID to travel on any commercial flight.

That's not the only thing people will be able to do with their new license: it also allows access to federal facilities and nuclear power plants. But the biggest concern for Blount Countians will be the ability to fly.

Thousands of people have already headed over to Maryville's driver services center to apply for the new license before 2020 gets underway so as not to be turned away at the airport security gate 10 months into the turn of the decade.

But getting a REAL ID license is not as straightforward as renewing an existing one. Rather, it's similar to getting a new one. The local license branch has posters explaining there are five basic but essential things applicants will need to bring along:

It's the U.S. citizenship portion of the requirements — applicants will need to bring either a U.S. passport or birth certificate — that have proved tricky to those with odd situations involving missing documents, name changes or misspellings.

One of Alcoa's own commissioners, Ken White, recently told The Daily Times in an interview that, when he went to get his real ID in 2019, he ran into just such an interesting problem.

"My birth certificate had been changed once," White explained. "That's what created the original problem."

He said that he had to go to court in Nashville simply because his father's name had been spelled differently and his mother had his name changed.

After finding out he would have to pay $170 for the change, White also paid a visit to the health department which called Nashville for his information. Unfortunately, his name had been misspelled.

Alcoa lawyers came to White's rescue and were working to sort details out for him as the year closed out, but White offered the same advice the Tennessee Department of Safety & Homeland Security is offering.

"Look at your birth certificate and see if there's anything wrong with it," he said, adding the process was frustrating but he had to do it: He and his wife fly and he is not a stranger to federal buildings.

TDHS Deputy Director of Communications Lindsey Balthrop confirmed in an email to The Daily Times that customers not having the correct documentation is one of the biggest struggles in the effort to get residents signed up for the REAL ID.

"Documents must be original or certified; photocopies are not acceptable," Balthrop said. "Evidence of all name changes must be supported with documentation such as a marriage certificate, divorce decree or certified documents from the court."

She also added another element to the list of required documents: proof of name change, if it applies.

Outside of the DHS and the local license branch, another Blount entity has a vested interest in the transition to REAL IDs: McGhee Tyson Airport.

That's why, come January, the airport will be launching a promotional campaign to make sure that no one gets turned away at the security gate.

TYS Vice President of Communications Becky Huckaby confirmed in a phone interview with The Daily Times that the airport will be launching their REAL ID campaign early 2020.

"I think what will happen is that people who are frequent travelers, they will be well aware of the requirements," Huckaby said. "What will be the biggest concern is trying to notify the people who only travel every once in a while and maybe don't pay attention to travel information until they're getting ready."

The campaign will include signage, social media announcements, press conferences and perhaps even video, Huckaby confirmed, as the airpot pushes out information the state is has been rigorously promoting, especially during 2019.

What is the airport saying to Blount Countians meanwhile?

"Don't wait," Huckaby said. She said that some are waiting until their licenses need to be renewed, but the sooner the better. Come September and even August, offices may be filled with people who may have put the task off until the last second.

Wait times are not too long, currently. Balthrop said wait times at the Maryville license branch averaged 24 minutes and 50 seconds as recently as this October. Those numbers were higher in July when they averaged around 45 minutes.

Huckaby reiterated that it was vital to bring the correct documentation to avoid confusion or frustration.

Both she and Balthrop advised REAL ID applicants to check the TDHS website before they head to the nearest license branch.

Even after all the public education campaigns planned by the state, the local license branch and the airport, Huckaby admitted October 2020 will still be confusing for some.

"There probably will be people who show up that day and need to learn more," she said. "But we're going to do what we can to try and keep that number as low as possible."

Other airports will be doing the same, she added, and TYS will be relying on its networks to make sure that, come next Thanksgiving, Christmas and New Year, people can make it onto their flights without a hitch.