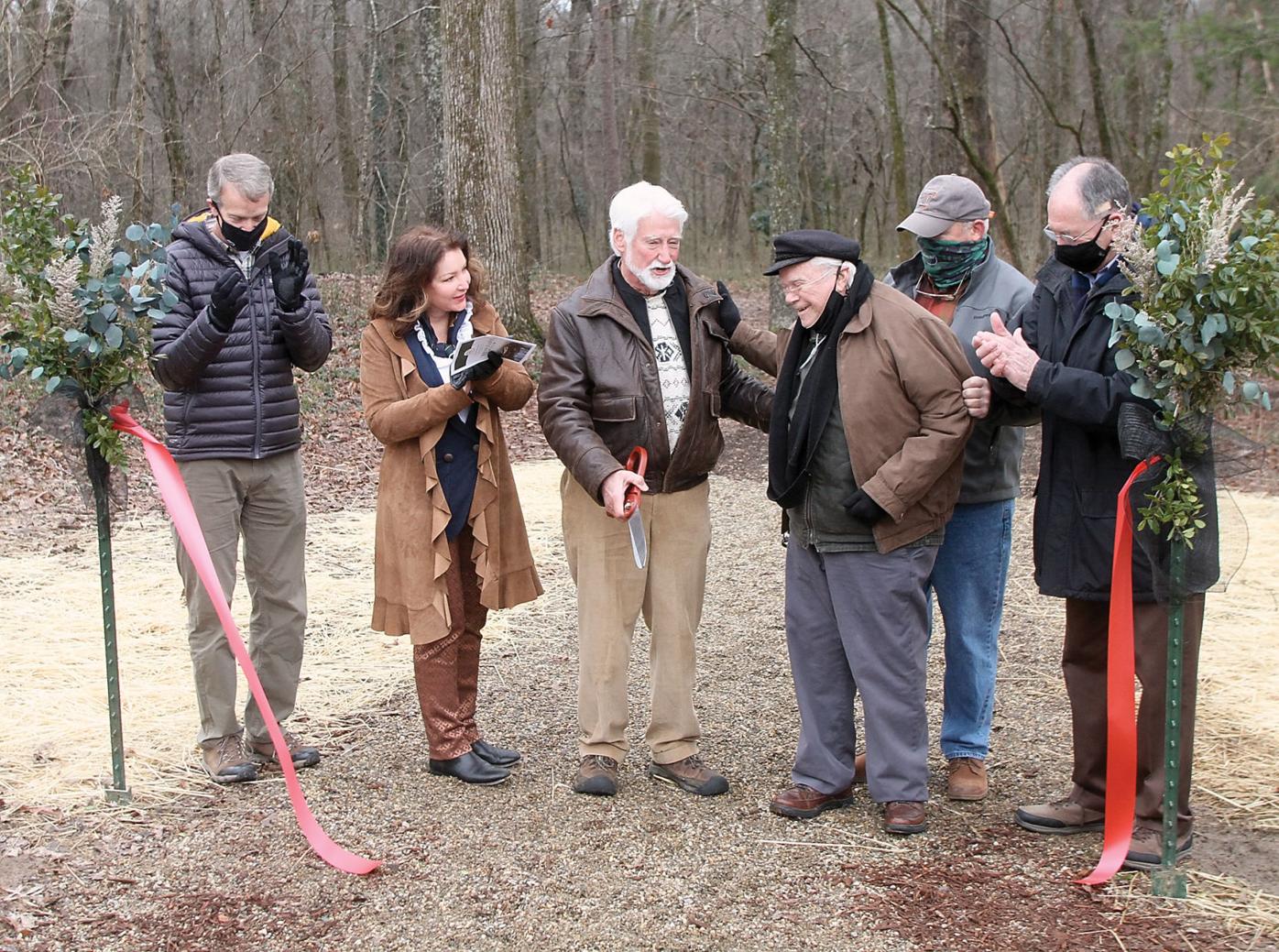 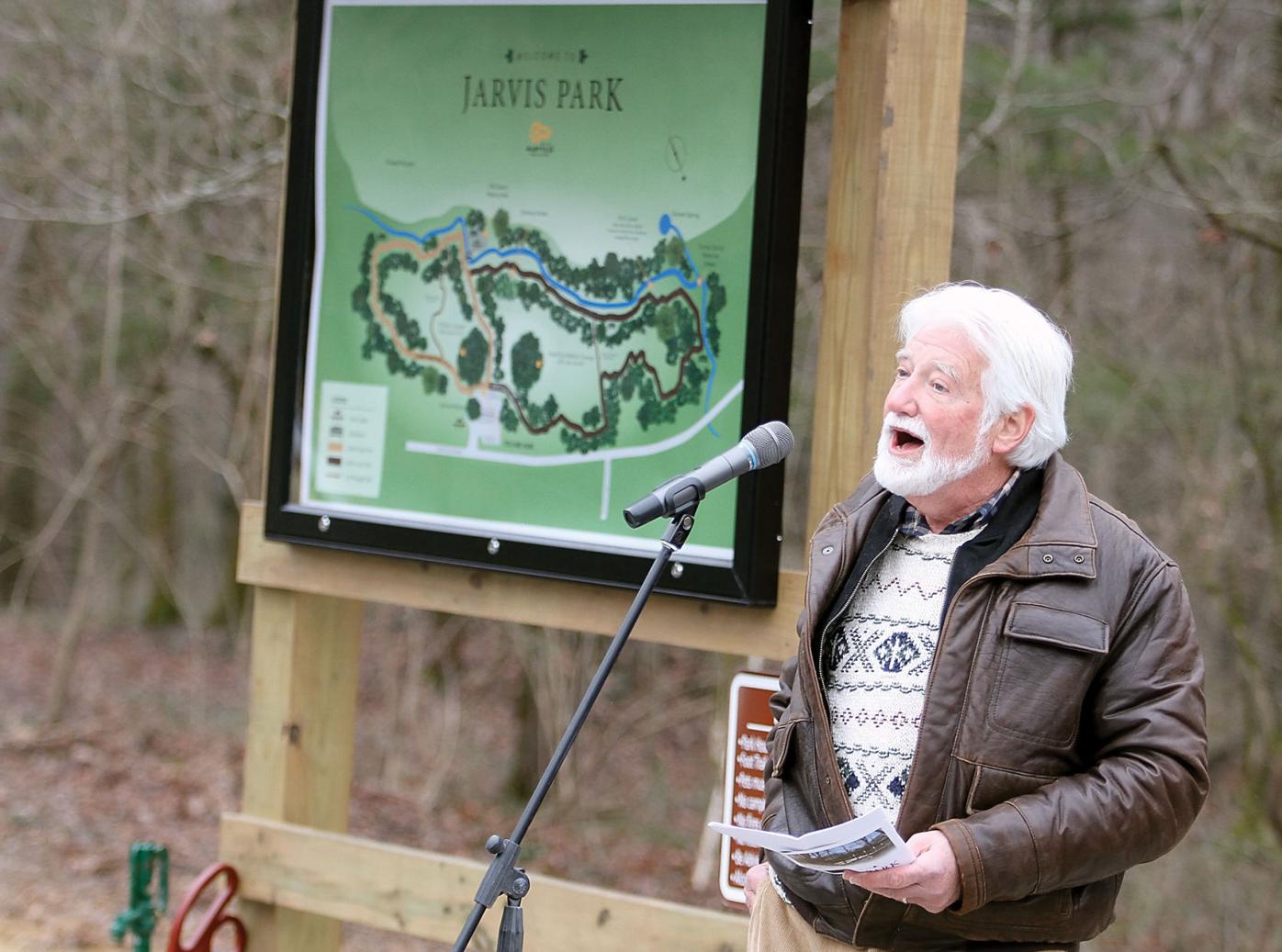 Dr. Craig Jarvis talks to a crowd gathered Friday to attend the opening of Jarvis Park on South Court Street.

Dr. Craig Jarvis talks to a crowd gathered Friday to attend the opening of Jarvis Park on South Court Street.

Jarvis Park officially opened in Maryville early Friday, with 11 acres of woodlands and trails that will eventually expand into 37 more acres to include a soccer field.

The project is a joint venture between the city of Maryville, Dr. Craig Jarvis, the Jim Cornett family and Foothills Land Conservancy. The grand opening and ribbon-cutting took place in front of many supporters and those eager to hit the trails to explore.

Jarvis, a Maryville gastroenterologist, bought the 10-acre parcel of land from Cornett and then donated it for public use. Foothills Land Conservancy also came on board to purchase the 1 acre on which Cornett's home was located. The property was once part of a land-grant farm that belonged to the Duncan family and their ancestors, the Crawfords.

“What a great day, even though it’s a cloudy and cold day,” said Maryville Mayor Andy White. “Welcome to Jarvis Park. The park was more than three years in the making.”

The property is within Maryville city limits, north of the Vulcan Materials quarry off Court Street. It is within one mile of the Blount County Courthouse. There is three quarters of a mile of walking trails.

“We have an incredible park system and this new park is a great addition to that inventory,” White told the crowd. “No city has ever looked back at their history and said they regretted preserving green space. I don’t think there has ever been a community that will look back and say ‘we have too much green space.’”

Jarvis also was present at the celebration. He said he’s been in this community for decades and wanted to do his part to provide opportunities for future generations to enjoy undeveloped spaces.

“How do you give back to a community you love?” he asked. “The answer stretches out in front of you.”

It was former Mayor Tom Taylor and City Manager Greg McClain who made Jarvis aware of the available land. Jarvis thanked people like Bill Clabough with Foothills Land Conservancy for its generous donation. This last large tract of land inside Maryville contains ancient trees and beautiful meadows, Jarvis said.

He said he has been fortunate to raise all of his children in this community.

“In these 41 years that have followed (after starting his career here), I have never regretted choosing Maryville as my home,” Jarvis said.

This physician also gave thanks to Phil Hoffman, Billy Minser, Marvin Beard and Steve Caldwell for helping him map out the trails and then take chainsaws to help clear the trails. He expressed his heartfelt gratitude to the Duncan and Crawford families who always cared for the land and never cut the 200-year-old trees.

“I feel blessed to be able to give this park to the city that has given so much to me,” Jarvis said.

A labor of love

Taylor spoke at the event as well. He was mayor when this project was coming to fruition. He said the city of Maryville is so fortunate to have partnerships across the county.

“We have the library, which is one of our cornerstones of our community,” the former mayor said. “We have Parks & Recreation. Think about the green spaces we have in Maryville with the greenbelt, Pistol Creek wetlands and Sandy Springs Park. All are integral parts of this community. This takes place because we have concerned citizens who come together and make this work.”

Taylor said it took some “nagging and badgering” on the part of Jarvis to keep this project moving forward, along with intense focus. “He is the heart and soul of the project,” Taylor said.

Jim Cornett was helped to the microphone in his wheelchair.

“Today is one of the happiest days of my life,” he said. He and wife Betty had purchased their piece of the land back in 1951 shortly after marrying. She died in December.

“I want to thank the city of Maryville for allowing us to be part of this, to help preserve history,” he concluded.

Before the ribbon-cutting, White read a proclamation from the city, declaring Feb. 19, 2021, as Jarvis Park Day.

After the ceremony, attendees were welcome to explore the new park. Jarvis said it is a good feeling to know this land will remain untouched. He said a love for nature is part of him.

“That is what I try to teach my children,” Jarvis said. “To love nature. I drag them a lot to the Smokies. If you sit down in the middle of this and the trees are leafed out, you can imagine you are in a much larger place. I can’t wait for it to leaf out and the dogwoods bloom and the redbuds.”