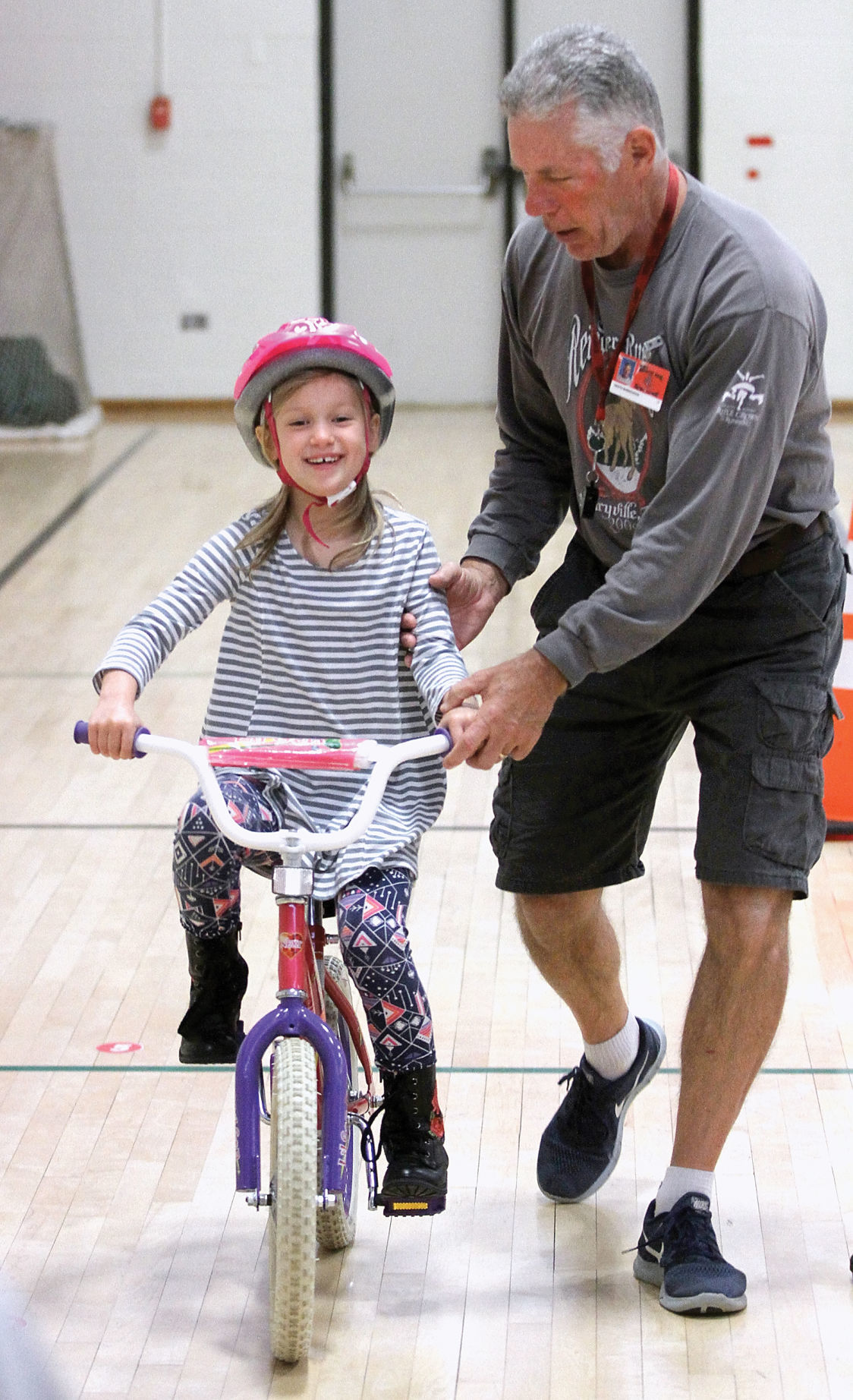 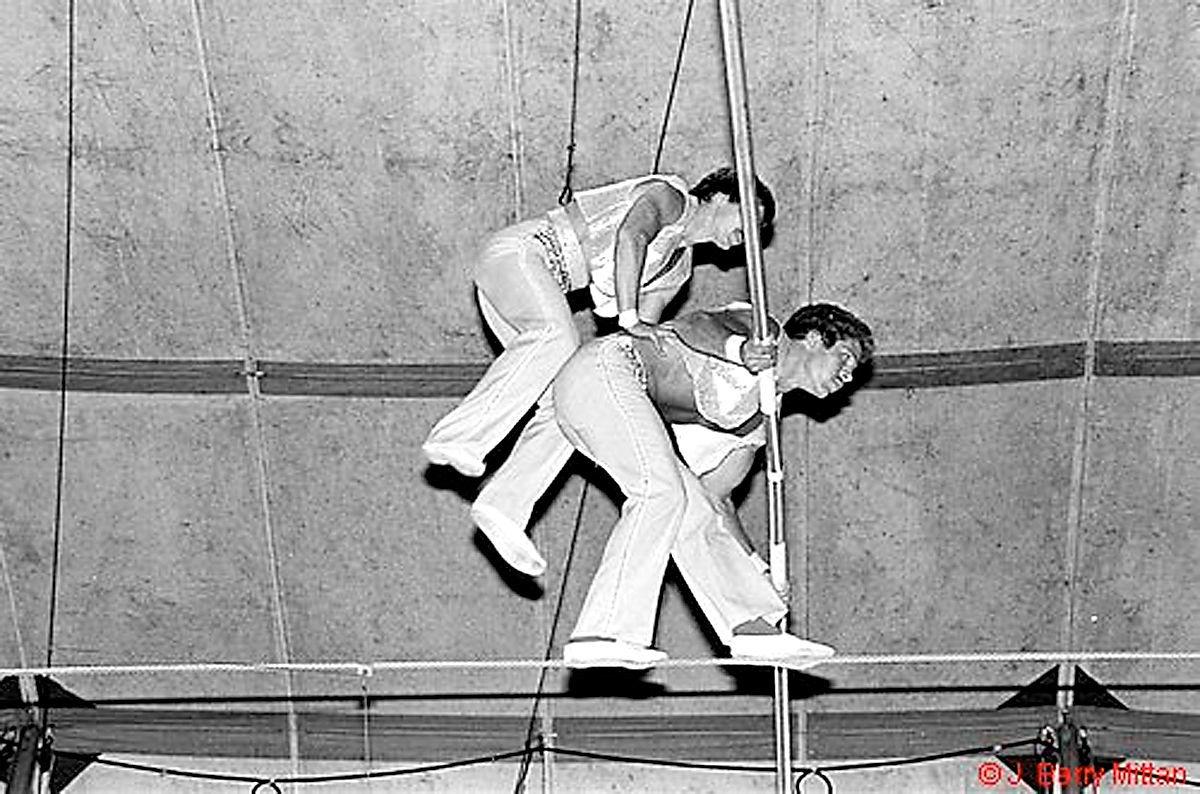 Keith Burroughs had the strength to be the base, holding up others in acts with Florida State University’s Flying High Circus. 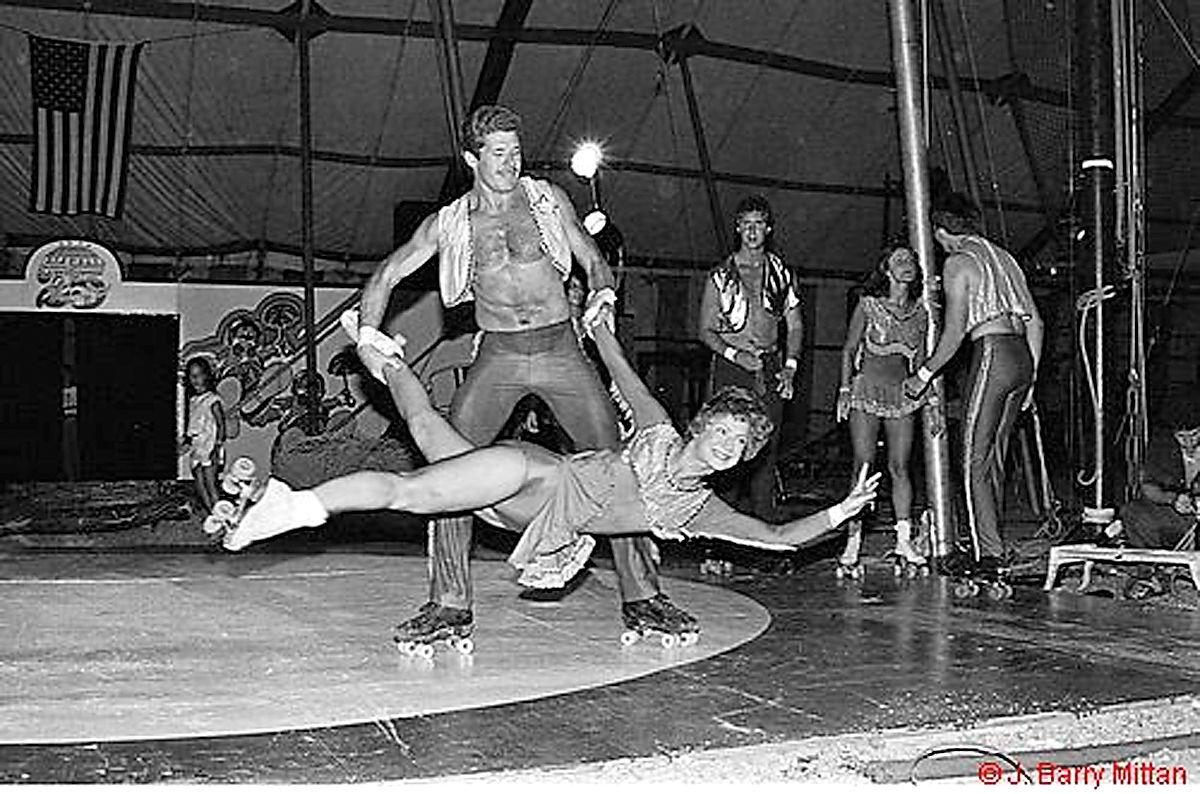 Keith Burroughs’s sister said he couldn’t truly roller skate, but he still performed on skates in the Flying High Circus. 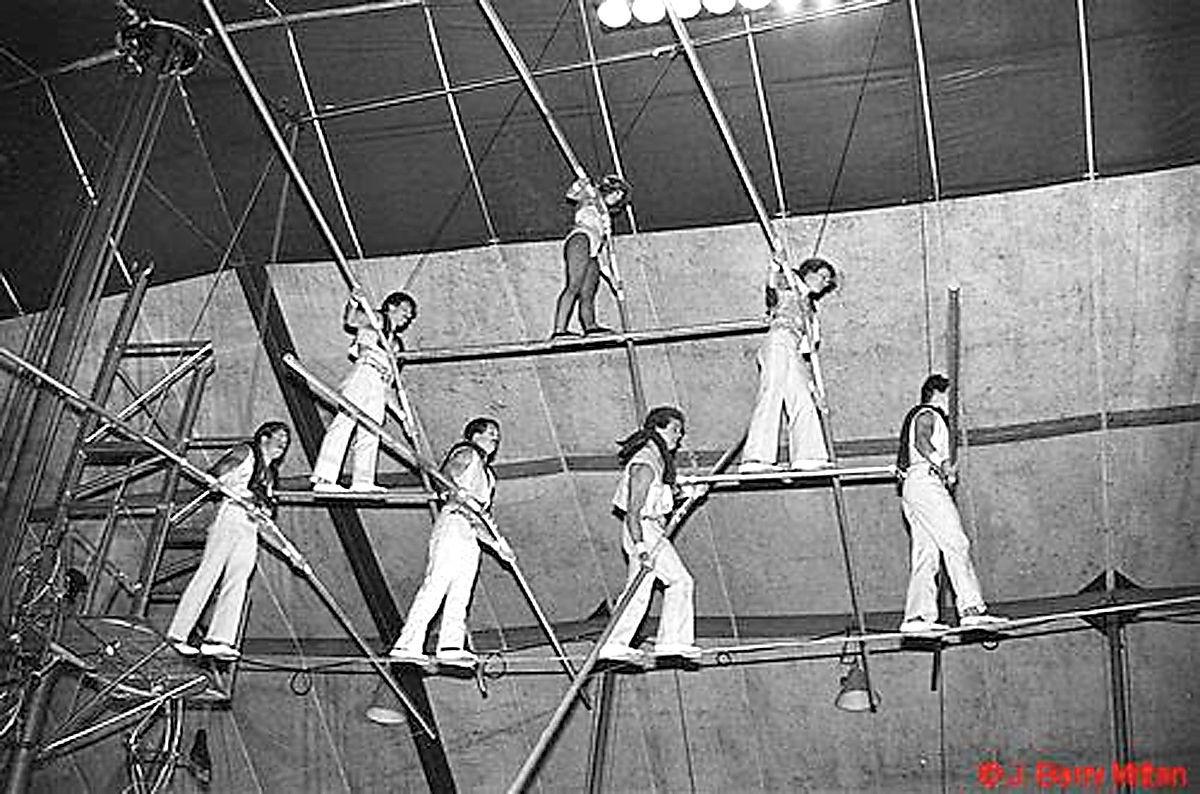 Keith Burroughs is part of the base in this seven-person pyramid during a performance of Florida State University's Flying High Circus. 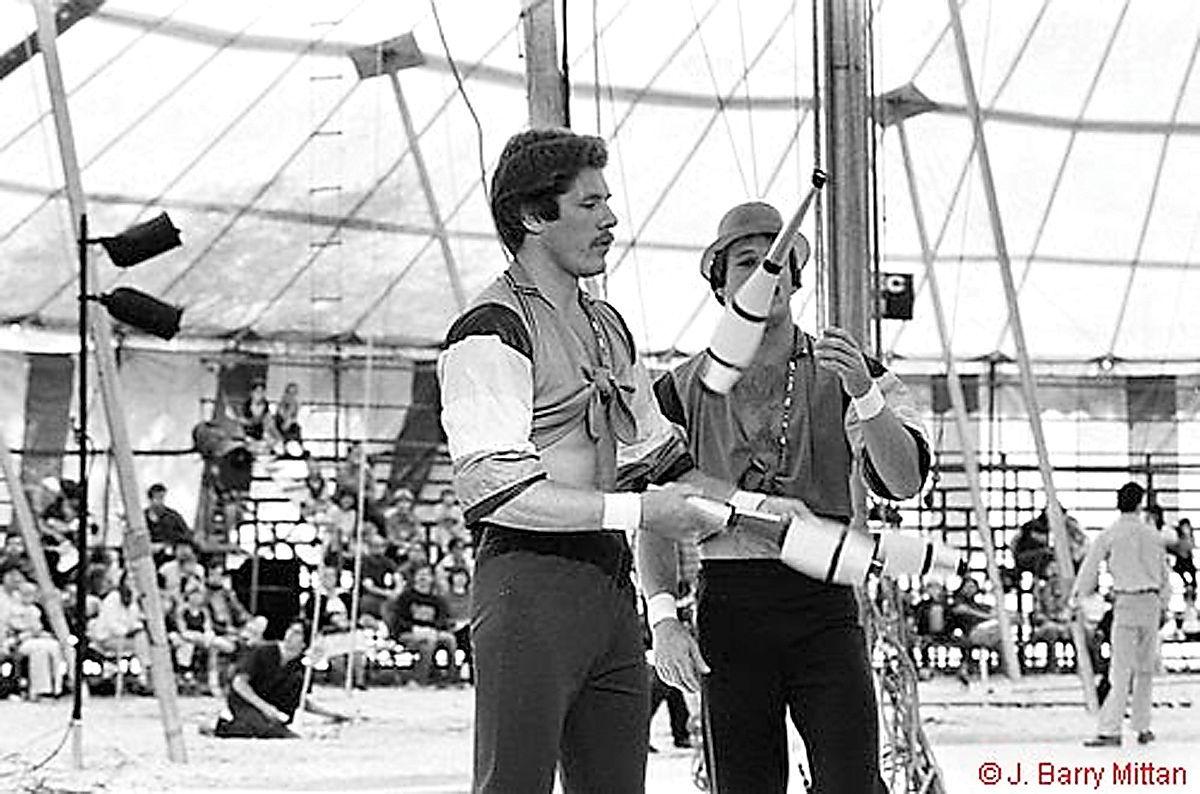 Keith Burroughs juggles as a performer in the Flying High Circus.

Keith Burroughs had the strength to be the base, holding up others in acts with Florida State University’s Flying High Circus.

Keith Burroughs’s sister said he couldn’t truly roller skate, but he still performed on skates in the Flying High Circus.

Keith Burroughs is part of the base in this seven-person pyramid during a performance of Florida State University's Flying High Circus.

Keith Burroughs juggles as a performer in the Flying High Circus.

For nearly two decades, Keith Burroughs, who died this weekend, was one of the first teachers to greet students arriving at John Sevier Elementary School and the last to say goodbye as they left campus, guiding them safely through the crosswalk.

As the physical education teacher since 2000, he helped countless kindergarteners pedal bicycles for the first time and older students to learn how to swim.

JSE students wrapped up their annual swim week Saturday with a party at John Sevier Pool, and Burroughs was with them. Later in the day, he fished with his own children, Joseph, Julia and Caroline.

“I don’t know that I’ve met anyone who loved kids more than Keith,” said Jeanie Murray, an assistant at JSE who coached the school’s unicycle club with him over the past decade.

Burroughs was more than a good teacher, said Mike Dalton, the director of Maryville City Schools and the person who hired him. Since Dalton’s retirement, he had continued to watch Burroughs interact with students on the JSE playground, because he lives nearby.

“He always took time and never seemed to get impatient with the kids,” Dalton said.

If there was something to benefit children, Burroughs would be the first to do it, said Rick Wilson, who served as JSE principal before moving to the district’s Central Office.

During the school’s annual carnival, he would be there from set-up until everything was put away.

“He reminded me of how we should all serve,” said Wilson, now director of human resources for MCS.

“He never did anything small,” said current JSE Principal Ginny Boles, adding that Burroughs always was looking for ways to make things better and involve more people, like adding more games to the carnival.

During the swimming party Saturday at John Sevier Pool, Boles said he asked her, “Is there any way we can make this a little bit longer next year?”

Murray said Burroughs took the unicycle program to a new level with juggling and performances. Often he would juggle clubs with his son while the cyclists rode a pattern around them, and he taught others to juggle, too.

The unicycle club expanded from JSE to Coulter Grove Intermediate School, which has performed at halftime during basketball games at Maryville High School, Maryville College and the University of Tennessee.

Melissa Michalak, who also works with the cyclists, said Burroughs was wondering whether the team could perform before a Maryville High School football game.

At JSE, Burroughs knew everything about everybody, said Assistant Principal Brian Tinker. If a student mentioned an upcoming ballgame, Burroughs would ask about it the next morning.

As devoted as he was to the JSE students, she said, “Nothing was ever as important as the father he was.”

When his own 8-year-old daughter, Caroline, came through the crosswalk, “He always gave her a big hug and called her his sweetness,” said Nichols.

Boles’ son James has been a member of the unicycle club since third grade. Although he’s not usually a risk-taker, Boles said he recently announced that he wanted to move up to the 5-foot unicycle.

When she asked her son about that, he told her, “Mr. Burroughs believes in me, and I know if he says I can do it, I can do it.”

Wednesday, with the clubs’ other coaches, James did ride that unicycle.

Tinker’s daughter, Avery, just started kindergarten this year but learned to ride a bicycle over the summer because she wanted to show Burroughs that she could.

He was one of the most-requested coaches under the Maryville-Alcoa-Blount County Parks and Recreation Commission, according to Assistant Director Chris Clark.

Burroughs had coached basketball and soccer since 2007, often more than one team at a time, and for the past couple of years had been a counselor for the performing arts camp.

Burroughs cared not just about winning but about having kids learn, Clark said. “The way he talked to kids, he made it fun.”

Before a unicycle show, Burroughs would remind the students that a very small percentage of the audience members could do what they were about to do, Michalak said.

“He believed that these kids could do anything, and he encouraged them every day,” Michalak said.

‘Speedy’ and the circus

Long before Burroughs arrived in Maryville, he was showing young people they could do more than they thought possible, working in a circus where folks knew him as “Speedy.”

Even his sister, Johnna Staudenmaier, isn’t sure exactly where that nickname came from, but she speculates it could be a joke about his being slow.

He was 12 and she was 11 when the family began vacationing at Callaway Resort and Gardens in Georgia, where the Florida State University Flying High Circus performs and serves as recreation counselors in the summer.

FSU has one of only two collegiate circus programs in the United States.

Although he started college with a baseball scholarship to Bethune-Cookman University, she said her brother wasn’t enjoying it and followed her to FSU. Burroughs played football, tennis and golf, too, she noted.

He was a student performer from 1979-83, and after working some other jobs, returned as assistant director of the circus from 1989-98.

In the circus, he had the strength to be the base, supporting several others on teeterboard and high wire acts, including a seven-person pyramid.

Although neither of the siblings could truly roller skate, Staudenmaier said, that’s one act they performed together.

“He performed almost every single act at the FSU circus,” said Tricia Ravenhorst, who met Burroughs when she was a freshman at FSU in 1993.

As assistant director, she said, Burroughs held safety lines, taught students how to rig equipment and mentored others on how to coach.

“He knew how it empowered people to do something they never thought possible,” Ravenhorst said.

He put her, a future lawyer, in a comedy trapeze act.

“This is a man who believed in the possibility of every person that he met,” she said.

Burroughs met his wife, Amy, when she visited her sister at the circus. The proof of how much Burroughs loved his wife is that he left the circus to move with her to Tennessee, friends and family members said.

“He never looked back,” Ravenhorst said.

From 1979 through 2017, however, Burroughs never missed the “Home Show,” a tradition for the circus since the 1940s during which alumni return to perform and watch, Ravenhorst explained.

Both of them were unable to attend this year, but they texted during the event, with her forwarding photos to him, and their families got together in July.

Since news spread of Burrough’s death last Sunday, Boles said, “The outpouring of love has been overwhelming,” to JSE, Maryville City Schools and the Burroughs family.

“He touched so many people in so many ways,” she said.

His family will receive friends from 2-4 p.m. Sunday, Aug. 19, at Smithview Pavilion, with a celebration of life service following at 4 p.m. In lieu of flowers, contributions can be made to The Keith Burroughs Memorial fund. For details email keithburroughsmemorialfund@gmail.com.