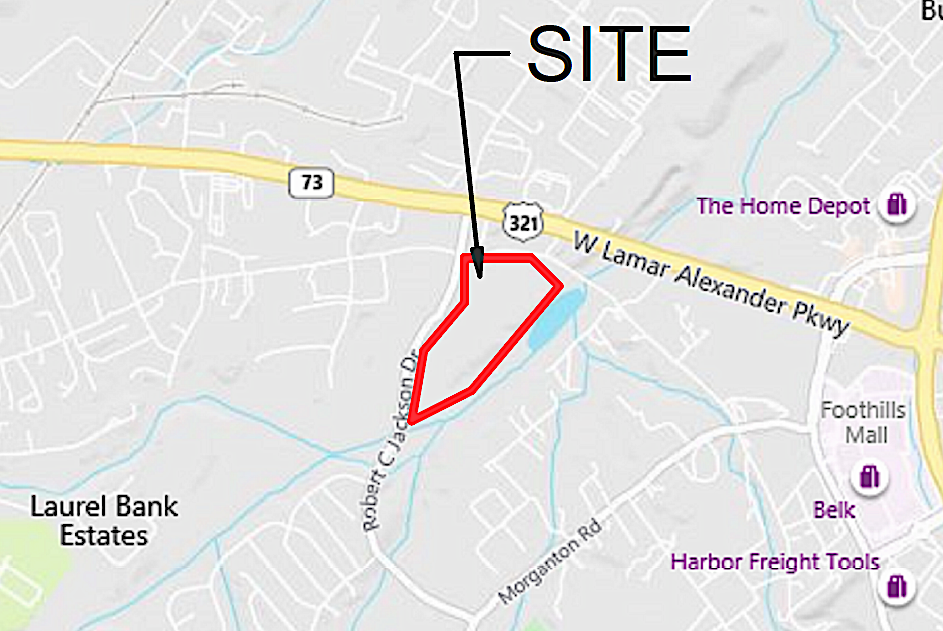 This map shows the location of a proposed Amazon warehouse facility to be built by Seefried Industrial Properties in Laurel Branch Park off the Robert C. Jackson Drive extension.

This map shows the location of a proposed Amazon warehouse facility to be built by Seefried Industrial Properties in Laurel Branch Park off the Robert C. Jackson Drive extension.

Legal documents set to be part of a Maryville land sale show a few details behind what may eventually be a second proposed Amazon warehouse facility in Blount County.

Obtained by The Daily Times in a public records request, the documents are unsigned land sale agreements between land purchaser “Amazon.com Services LLC” and the city of Maryville.

The Daily Times first reported a Maryville-based Amazon warehouse — Blount’s second after the Pellissippi Parkway/U.S. Highway 129 1-million-square-foot Project Pearl warehouse in Alcoa — in May based off details in preliminary engineering documents.

Those documents called the project “DNA8” and proposed a 142,930-square-foot warehouse with a “proposed occupant load” of 926 people and more than 150 staging and loading spaces for vans and trucks.

The land in question is 45.1 acres off Robert C. Jackson Drive in what the city is calling “Laurel Branch Park” — nearly 80 acres of land south of West Lamar Alexander Parkway and the DENSO industrial campus. Nearly half of this land is yet to be sold.

Amazon’s acreage will sell for exactly $6.5 million, according to the documents. City leaders and the company are set close sometime in August, Maryville City Attorney Melanie Davis said.

The documents were sent to Davis on Aug. 3, she said.

An agreement to sell these 45.1 acres are more than a half year old. It first came to public discussion Jan. 5 when City Council approved the sale of the land to Seefried Industrial Properties Inc., thereby entering into a “purchase and sale contract.”

Seefried is set to develop the property for Amazon and already has submitted building designs to the city.

The Georgia-headquartered firm is a go-to for Amazon, building warehouses similar to Maryville’s in numerous states, including one near Memphis.

So far, Maryville city leaders only mention Seefried when talking about this project. That’s because they are under legally binding nondisclosure agreements which are still effective, according to Davis.

Project Pearl’s Amazon deal had similar secretive features. Talks between interested parties — the city of Alcoa, Blount’s Industrial Board and Chamber of Commerce, county government leaders and others — started as early as March 2020, but they never used the name “Amazon” until Gov. Bill Lee formally announced the project on Feb. 3, 2021.

Because of nondisclosure agreements, city leaders can’t talk publicly about Amazon by name.

But Maryville City Manager Greg McClain talked about the land sale and Seefried after the August City Council meeting, during which council members approved a measure on second reading to spend more than $3.1 million on infrastructure improvements inside Laurel Branch Park.

“There have been a number of times we’ve had agreements in place and then they back out,” McClain said. “And this is not done until it’s done.”

He said various company names were involved since the project first became a possibility, but it’s only become clearer recently what exactly is happening with the project off Robert C. Jackson.

When the closing goes through, the project will be less tentative, but since January, the only guarantee has been a purchase and sale contract from Seefried — now assigned to Amazon, according to the sale documents.

But even if Amazon and Seefried were to pull out of the deal, Maryville has already profited by tens of thousands of dollars. McClain said Seefried initially put down about $50,000 in earnest money — an “agreed-upon amount” the firm won’t get back if closing doesn’t happen.

That figure increased when the purchase date was extended, Davis noted.

But she also said she fully expects the sale to go through.

Even with the legal documents are now in hand, Maryville is still protecting its 2021 spending priorities.

The $3.1 million in Laurel Branch Park improvements, though approved on second reading, now are officially contingent on the Amazon sale. The city’s finance department put language into that Aug. 3 second reading saying that $3.1 million in construction spending is subject to a land sale yielding money “in excess” of that amount — namely the Amazon deal.

Should the closing not go through for some reason, the city might not immediately spend on land improvements on either side of Robert C. Jackson Drive, making it potentially more difficult to sell the land.

McClain has noted numerous times since early 2021 that improving the Laurel Branch Park land will help it sell faster and at a higher price than if it were left as is, ungraded and without infrastructure.

How Amazon developments in Alcoa, Maryville are progressing

How events are moving forward on the location of an Amazon facility in Alcoa and a second location in Maryville. Includes stories from The Dai…