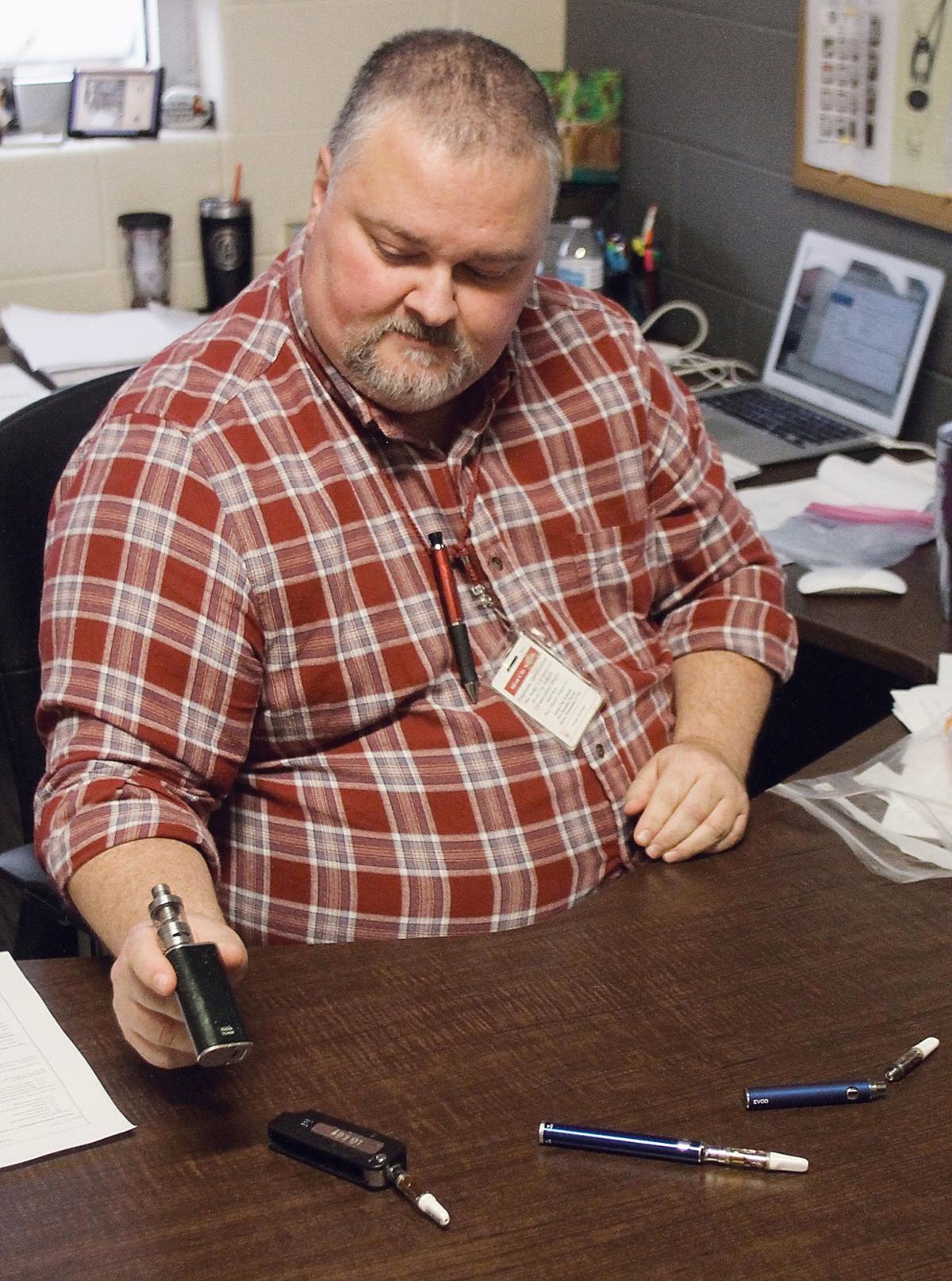 Alcoa High School Assistant Principal Tony Spears shows some of the vaping devices the school has confiscated, which may look like pens, flash drives or key fobs. 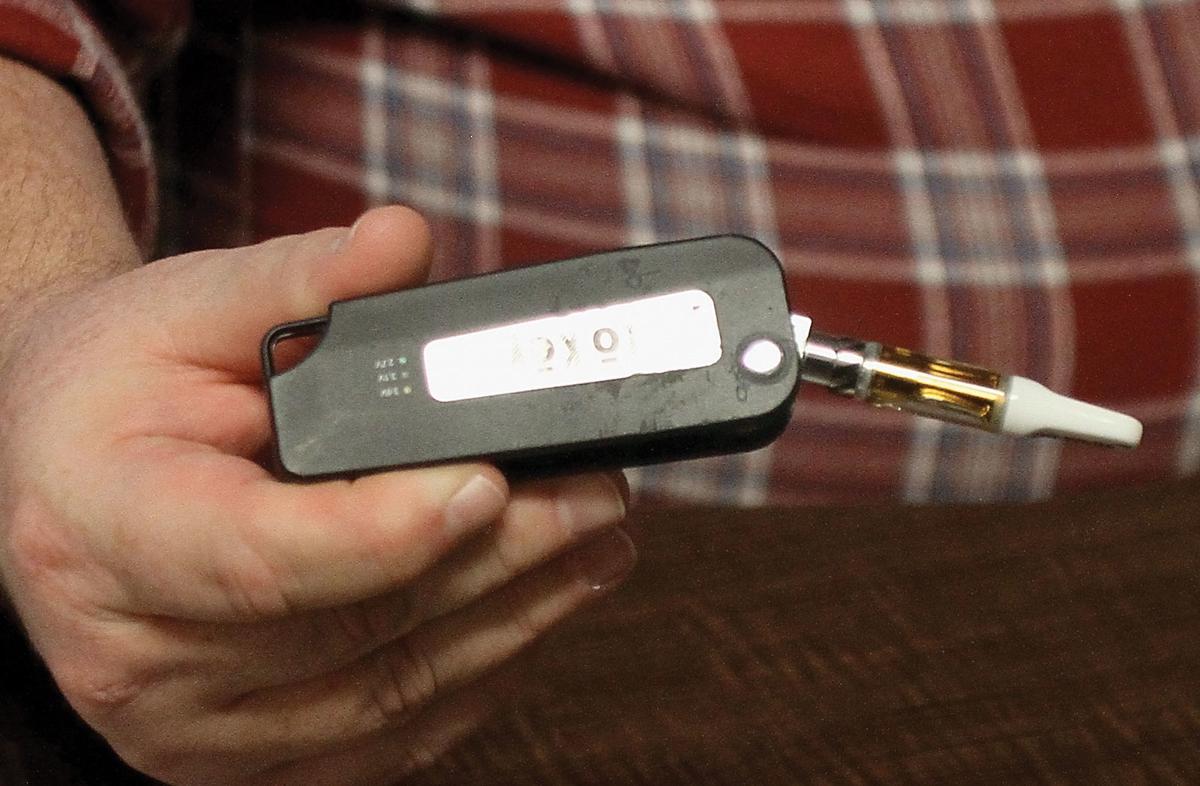 Alcoa High School Assistant Principal Tony Spears shows a vaping device that resembles a key fob, which was confiscated from a student. Already this school year AHS has suspended 14 students for vaping-related offenses. Administrators told the school board this month that they are working on new policy recommendations to deter vaping. 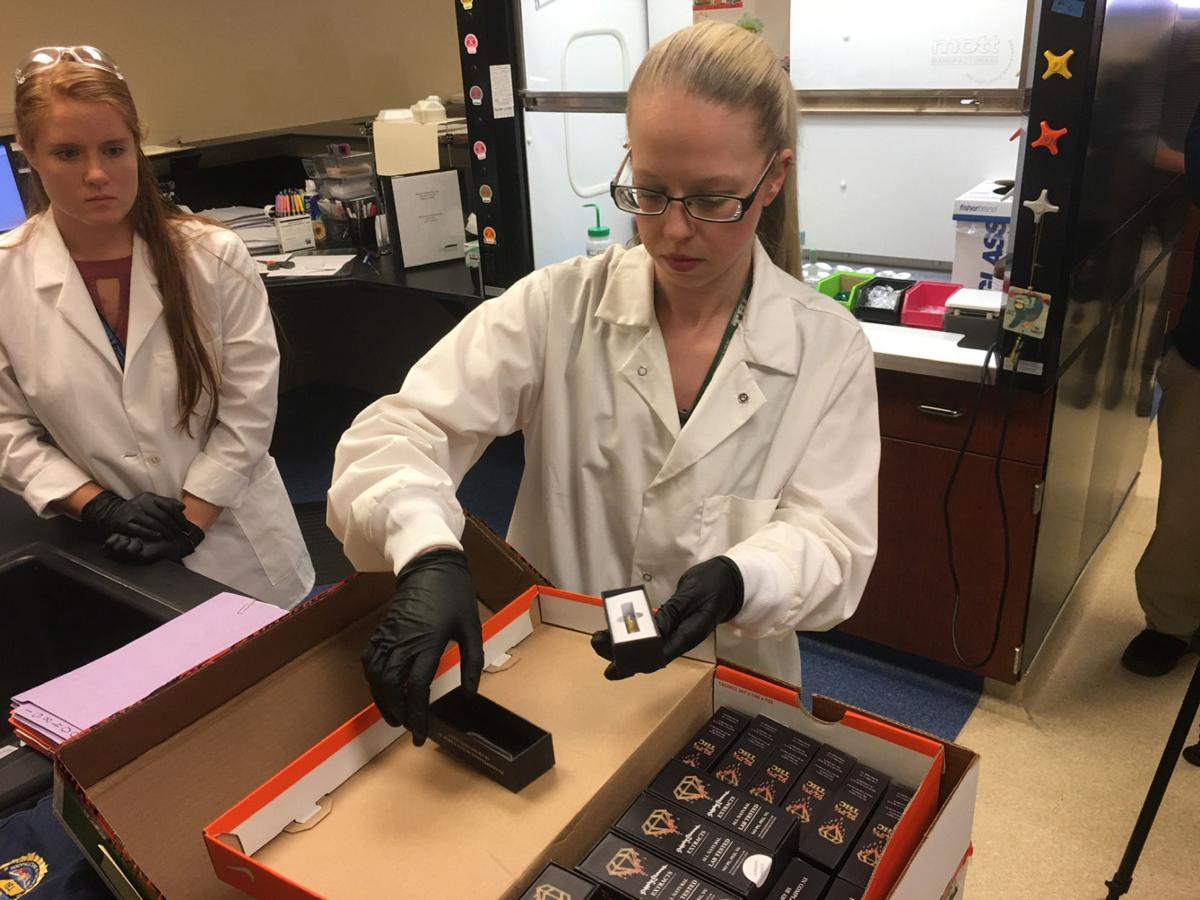 Technicians at the Tennessee Bureau of Investigation’s upper east regional lab show The Daily Times reporters a case of vape pen cartridges being processed as part of an investigation in October. Local schools report vaping has risen dramatically the past couple of years, and some now have the ability to test on-site for THC, one of the chemicals in marijuana.

Alcoa High School Assistant Principal Tony Spears shows some of the vaping devices the school has confiscated, which may look like pens, flash drives or key fobs.

Alcoa High School Assistant Principal Tony Spears shows a vaping device that resembles a key fob, which was confiscated from a student. Already this school year AHS has suspended 14 students for vaping-related offenses. Administrators told the school board this month that they are working on new policy recommendations to deter vaping.

Technicians at the Tennessee Bureau of Investigation’s upper east regional lab show The Daily Times reporters a case of vape pen cartridges being processed as part of an investigation in October. Local schools report vaping has risen dramatically the past couple of years, and some now have the ability to test on-site for THC, one of the chemicals in marijuana.

Within the past couple of years, local public high schools have seen a sharp climb in the number of students with vaping products on campus.

“This year it has really taken off and become somewhat of an issue at the high school,” Director Brian Bell told the Alcoa Board of Education during a recent work session.

During the past school year, Alcoa High School recorded two suspensions related to vaping — this year it’s already had 13, and another student suspended for drugs also had a vape pen.

“It’s an explosion,” said Tony Spears, assistant principal at Alcoa High School. “It’s everybody; it’s students that don’t see the concern in it, and they almost play it like a game. You know, can I get by vaping in the lunchroom, can I go into the middle of the classroom and vape without the teachers seeing.

“It’s one of the worst things to hit schools in a long time,” Spears said.

“The numbers are astronomical across the state,” Liz Johnson, director of tobacco prevention for the Tennessee Department of Health, said in a phone interview last week.

The national Monitoring the Future Survey found in 2018 that 37.3% of high school seniors had vaped in the past year, as had 17.6% of eighth graders.

During the 2018-19 school year, William Blount caught 36 students with a vaping product by November. This year it’s up to 68. At least some of the rise this year in schools may be the result of educating teachers about vaping and what devices look like.

Heritage High School also saw vaping as an issue during the past school year.

“We’ve had them walking down a hallway hit a vape,” HHS Principal Jake Jones said. “They’re quite bold in the ways they do it and when they do it.”

Maryville City Schools reported 52 suspensions related to vaping, tobacco or possession of vaping/tobacco products during the past school year, and 13 so far this year, according to Sharon Anglim, the district’s communications director.

While dipping tobacco and cigarettes may have been used more by boys or certain groups of students, the schools are seeing vaping across demographics. Students with great grades and no previous offenses are being caught with vape products, and with flavors and scents like fruit and bubble gum, it’s appealing more than traditional tobacco products.

At Blount and Alcoa’s middle schools, administrators report a relatively small number of incidents and say it’s generally students just having the devices, or even parts of them.

“Parents had no idea they had it,” said Union Grove Middle School’s principal, John Webb.

Before vaping, Webb said his middle school really didn’t have an issue with smokeless tobacco or cigarettes. “It just doesn’t show up,” he said.

UGMS saw about 14 vaping incidents during the previous school year and about seven so far this school year.

Vaping devices range from looking like a computer flash drive to key fobs, and educators note new devices coming on the market are built in to regular hooded sweatshirts, backpacks and smart watches.

Spears described for Alcoa’s school board how in a matter of seconds when a teacher’s head is turned a student can inhale from a vape pen, “blow it into their hoodie and it’s gone.”

“With the vapes it could have no odor,” he explained. “It could have apple scent, bubble gum scent. You literally have one to two seconds that if you’re not watching them at that point, you’re going to miss it.”

Across the local public schools, administrators reported that often they are catching students because of teachers checking bathrooms at random times or other students reporting what they have seen.

School and health officials are concerned about the health risks from potential contents in the vape products, from fungal toxins to fentanyl.

As of last week, the Tennessee Department of Health had recorded 74 lung injury cases associated with e-cigarette use or vaping, with ages as low as 15.

Spears explained to Alcoa’s board that the school is seeing more incidents where users can fill the cartridges with their own product. That includes cooking marijuana into a product called “budder,” then taking a “dab” off that to inject into the vaping cartridge.

“From a distance if you saw a dab pen it might look like a Uniball pen,” Jones noted.

Some schools have kits to check the vape products for THC, the chemical in marijuana that leads to the “high,” but not all.

THC also isn’t the only concern. Other drugs such as fentanyl could be in the cartridges, and this summer researchers from Harvard University’s Chan School of Public health reported finding bacteria and fungal toxins in popular single-use and refillable e-cigarette products.

The Centers for Disease Control and Prevention recommends not using THC-containing vaping products or those obtained from informal sources based on the latest research on the current outbreak of EVALI (e-cigarette, or vaping, product use–associated lung injury), but health officials say nicotine is also a huge concern, particularly with young people who vape.

Johnson noted that vaping products are “full of nicotine and other chemicals that are dangerous to young people.”

“Any level of nicotine in an adolescent brain is a dangerous level,” she said, noting that brains aren’t fully developed until about age 25. “It’s highly addictive. Many of the kids we talk to don’t even know there’s nicotine in there.”

Once they’ve started using nicotine, a parent telling a teen to stop vaping is like telling someone who has been smoking for 30 years to quit, Johnson said.

Resources are available to help, however. For example, at Smokfree.gov there are resources specifically geared to help teens quit vaping, including text messaging and online chat support.

“High school is far too late for us to be talking to kids about these devices,” Johnson said, noting some elementary schools have been holding information sessions as part of parent nights.

Local schools are starting early and incorporating smoke-free and vape-free messages in multiple ways, from posters to classes to special speakers.

Maryville City Schools, for example, is offering in its after-school Adventure Club for kindergarten through grade three “Tobacco Tales” lessons in partnership with the local Health Department. Those lessons to say no to smoking are backed up in life skills classes with counselors, said Heather Ledbetter, the district’s Coordinated School Health coordinator.

“We’ve been trying to put this message out for years that vaping isn’t better than cigarettes,” Ledbetter said. “It’s really not better; it’s just a different set of issues.”

Previously some grant funding for anti-tobacco programs couldn’t be used for anti-vaping messages, but that ban has been lifted, health officials said.

Many school districts simply added wording about vaping and e-cigarettes to their existing anti-tobacco policies.

During the Alcoa Board of Education work session, administrators told the board they are looking at new policy recommendations aimed at education instead of just punishment. As Bell noted, if a student is suspended for vaping under current policy, “that kid’s going to go home and sit on the couch and vape all day.”

Said Keri Prigmore, director of attendance and Coordinated School Health for ACS: “One of the things that we do want to do is make sure that we inform students of the hazards, because they’re thinking about today, they’re not thinking about the long run, even though this is a national issue, people are getting sick.”

Tennessee also has been recruiting youth ambassadors to foster changes in policies through TNSTRONG, “Tennessee Stop Tobacco and Revolutionize Our New Generation.”

“It’s important to get kids involved in making change in their communities,” Johnson said.

The initiative posts information on Facebook and Instagram and will hold a summit in Chattanooga in June.

“Parents are going to have to step up and pay attention,” said Robin Cook, Coordinated School Health coordinator for Blount County Schools. “Parents are the first line of defense.

“Parents need to be more vigilant, and they need to educate themselves,” Ledbetter agreed. Grandparents too, she said.

Be Aware Blount, the Blount County anti-drug coalition, is holding a Parents for Prevention event from 6-8 p.m. Monday, Dec. 9, at Blount County Public Library. It will include a Hidden in Plain Sight simulation to help parents spot signs that children may be experimenting with drugs or alcohol, including e-cigarettes.