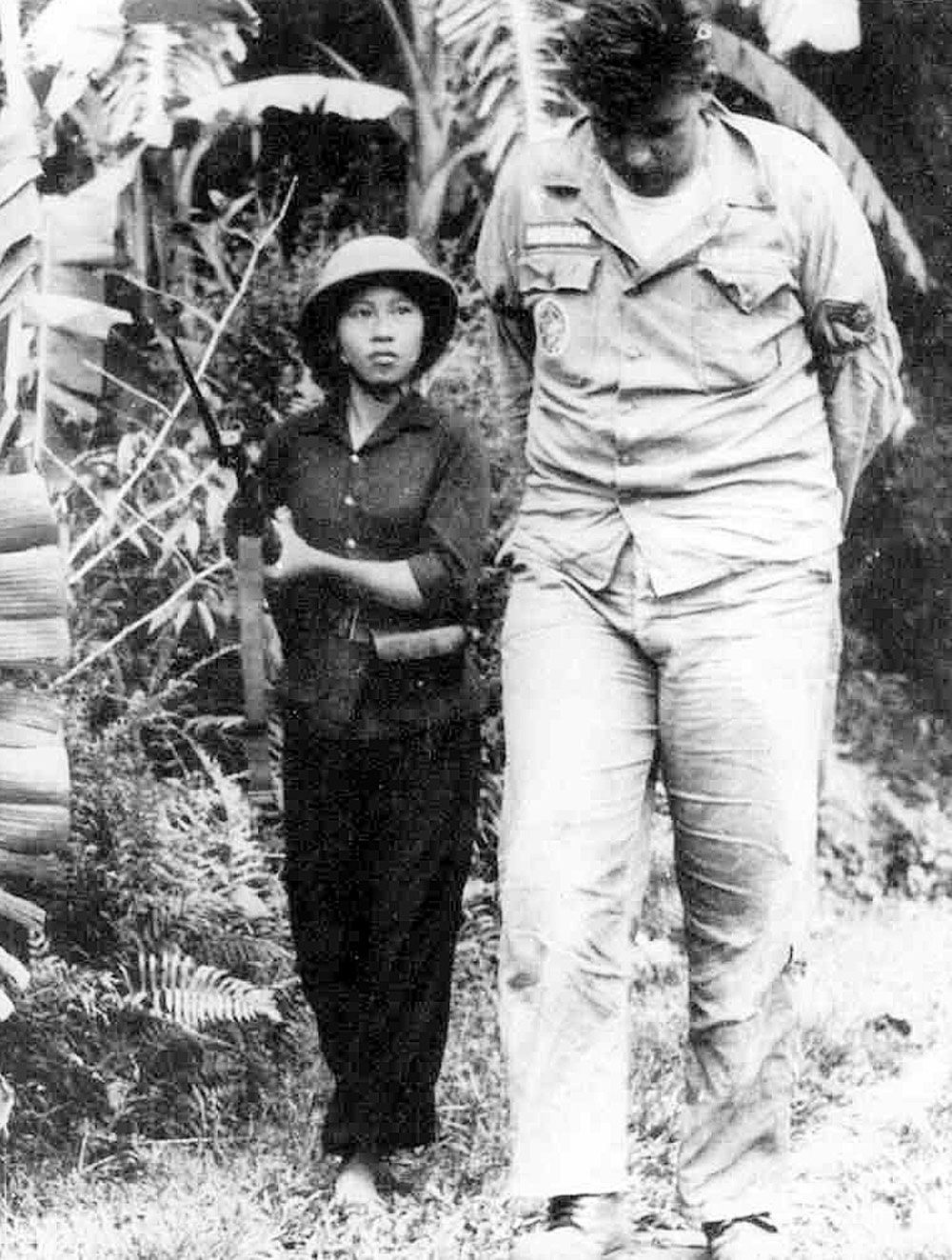 POW Airman 1st Class Bill Robinson is guarded by a North Vietnamese soldier after his capture on Sept. 20, 1965. 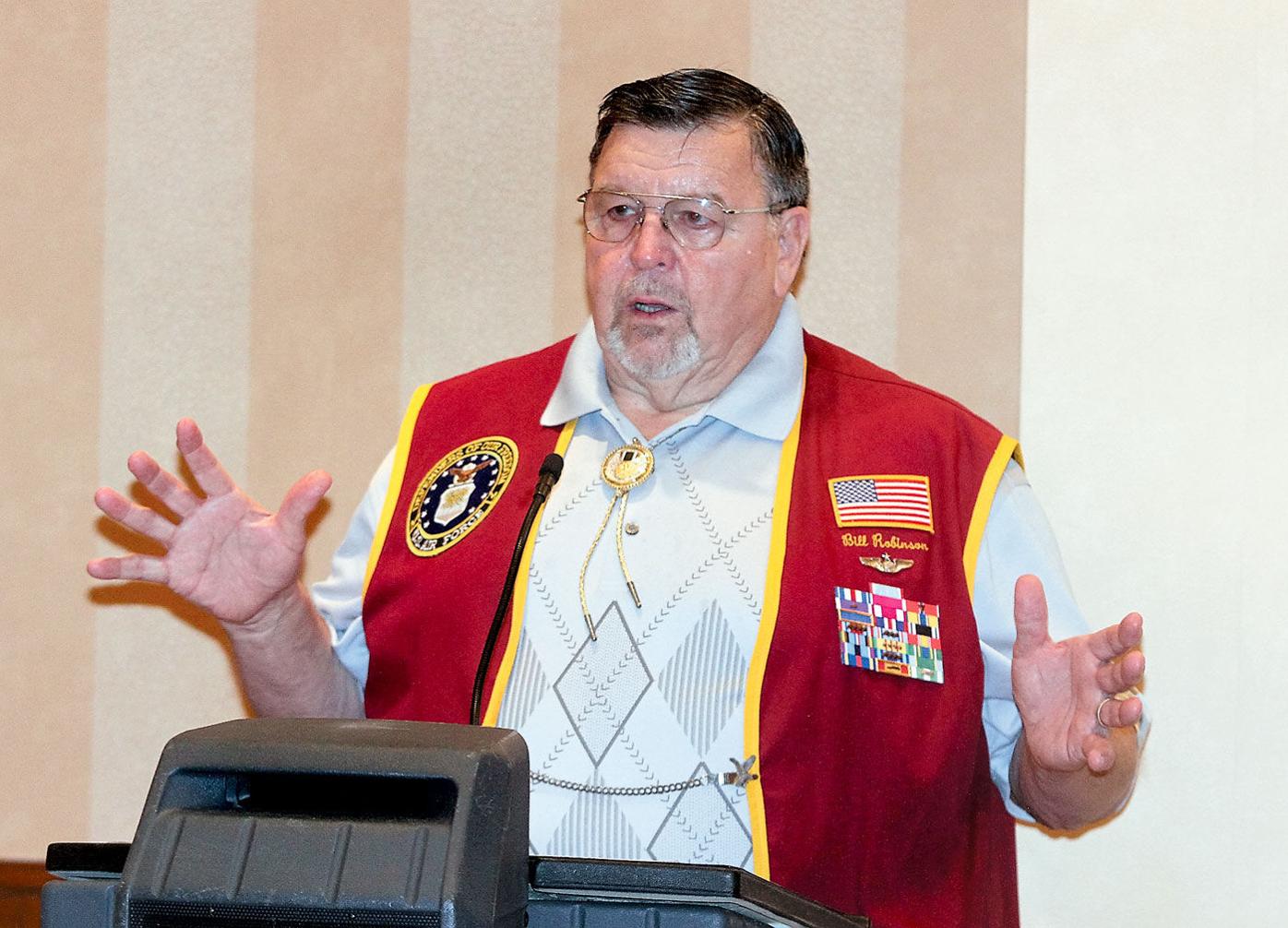 Former Vietnam War prisoner of war Bill Robinson talks about his experiences during 7½ years of captivity. He was the guest of the Alcoa Kiwanis Club on Thursday.

POW Airman 1st Class Bill Robinson is guarded by a North Vietnamese soldier after his capture on Sept. 20, 1965.

Former Vietnam War prisoner of war Bill Robinson talks about his experiences during 7½ years of captivity. He was the guest of the Alcoa Kiwanis Club on Thursday.

Retired U.S. Air Force Capt. Bill Robinson shared the story of his experiences as a prisoner of the North Vietnamese Army during the Vietnam War with the Alcoa Kiwanis Club on Thursday.

The longest-held enlisted prisoner of war in American history, Robinson, who now lives in Madisonville, was captured on Sept. 20, 1965, after the Kaman HH43B “Huskie” helicopter on which he served was shot out of the sky by the enemy. It was not until Feb. 12, 1973, more than seven years later, that he was released from the infamous Hanoi Hilton.

“The return with honor was our goal, but the most important things we lived with, the mottos were ... never give up, never give in, roll with the punches, bounce back, and be ready for the next round,” Robinson said, speaking of the shared experience of his fellow POWs during that time.

According to an article by the 134th Air Refueling Wing public affairs staff when Robinson visited McGhee Tyson Air National Guard Base in 2010, government investigations never determined whether Robinson and his crewmates were shot down by the North Vietnamese Army or by insurgent guerrillas operating near the Laotian border where they were captured.

The crew was engaged in a rescue mission at the time. They were just about to whisk away a downed pilot, Robinson said. “The pilot stepped into the doughnut that was at the end of the cable, and then, there is no other way to describe it than all hell broke loose and down we came.”

Surviving the crash, Robinson and the crew attempted to escape but were ultimately captured. “At first, they were easy on us, then the propagandists moved in, and we were taken to the local village and paraded out in front of the crowd. Next thing you know the locals were just jumping on us and beating the hell out of us. This happened to us several times as we got used to our hostile life.”

The days wore on as did the harassment. At one point, Robinson was subjected to a mock execution in front of an open grave. Finally, he was transported to confinement at the infamous “Hanoi Hilton.”

“We were blindfolded, basically hog-tied, till we got there,” he said. “When we got within a block of the Hanoi Hilton, they took our blindfolded off so we could see what we were about to enter, and it wasn’t pretty.”

Robinson and his fellow prisoners tried to stay positive. “The battle cry was the war can’t last three more months. We’ll be out of here by Christmas. That is the way we lived. I guess that the song, ‘Live Like You Are Dying,’ could easily describe how we spent every day trying to fill it with something to make our life worthwhile.”

Shuttled between prison camps, Robinson spent months upon months in solitary confinement. “We had no running water, no electricity, we were basically hog-tied in the mornings before daylight. They’d leave us tied up all day and they’d untie us at night.”

The prisoners were treated inhumanely. “Torture was very common,” Robinson said. “The hardest part was the torture wasn’t about political information as much as it was about propaganda information.”

Robinson was classified as missing in action for 3½ years until the North Vietnamese government acknowledged he was a prisoner. He was not the only one whose families agonized for years not knowing his fate.

“If there is anything I hold against the Vietnamese in that respect, it is how the families were treated,” he said. “... It was shameful and disgraceful.”

Still, the prisoners persevered. “The things that kept us going up to that point ... faith, faith in myself that I can handle things, faith in those around us that we would get through this together, faith in my country that it wouldn’t abandon me, but most of all faith in my God that he will see me through,” Robinson said.

“We believed every day this thing could end. I think about the times that someone would boom on the wall, and we’d all stand up in unison and face the east, look at an imaginary flag and recite the Pledge of Allegiance and then the Lord’s Prayer. These were things we did over and over again.”

One prisoner, named Mike, dared to sew a United States flag on the back of a shirt that the prisoners could salute. “Finally one night the Vietnamese came in and saw that flag and went ballistic,” Robinson said. “They pulled Mike out and put him through some of the worst torture that existed at that time.”

Finally, former President Richard Nixon negotiated what Robinson called an honorable end to the war and the prisoners were finally allowed to come home.

“Someone asked a friend of mine, ‘Can you describe freedom?’ and he simply responded, ‘Doors with inside knobs,’” Robinson said.

The POWs were treated with respect that was denied to other veterans of the war, Robinson said. “We came home to the full fanfare of victory, you might say as we were treated with honor. ... “My generation was unable to separate a war from the warrior, but in the present day we are able to. The warrior honors his country with his or her service. The war is irrelevant.”

In the end, when Robinson looks back on the experience, he considers what didn’t happen. “Only one out of five air crew members shot down over Southeast Asia survived, but I can truly say I am one of the luckiest men alive,” he said.