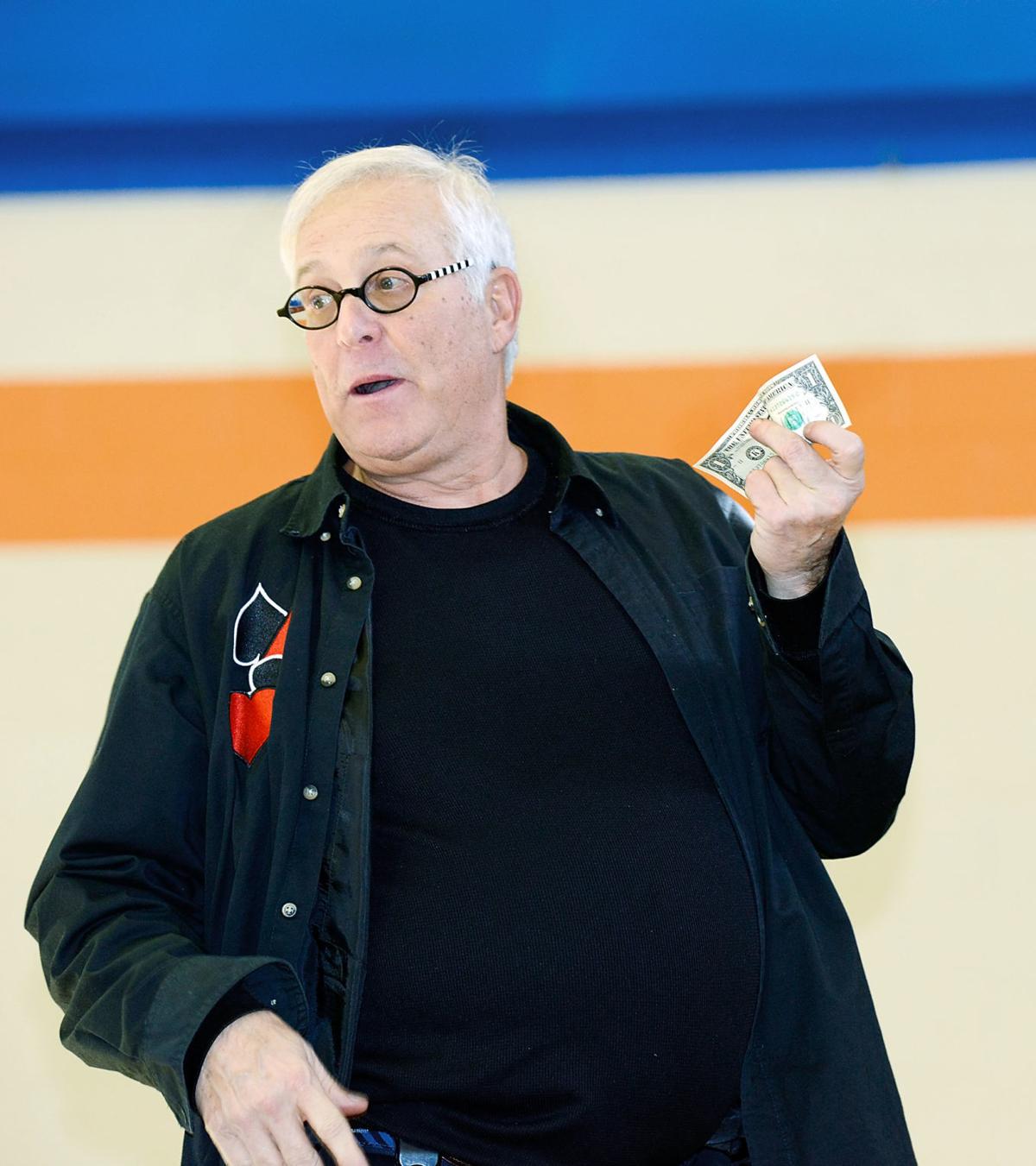 Stephen Bargatze prepares to perform a magic trick with a dollar bill borrowed from a William Blount Ninth Grade Academy student during an assembly Wednesday afternoon, Jan. 8. Bargatze is director of the TSSAA Right Team, which helps schools with topics such as drug prevention and student leadership. 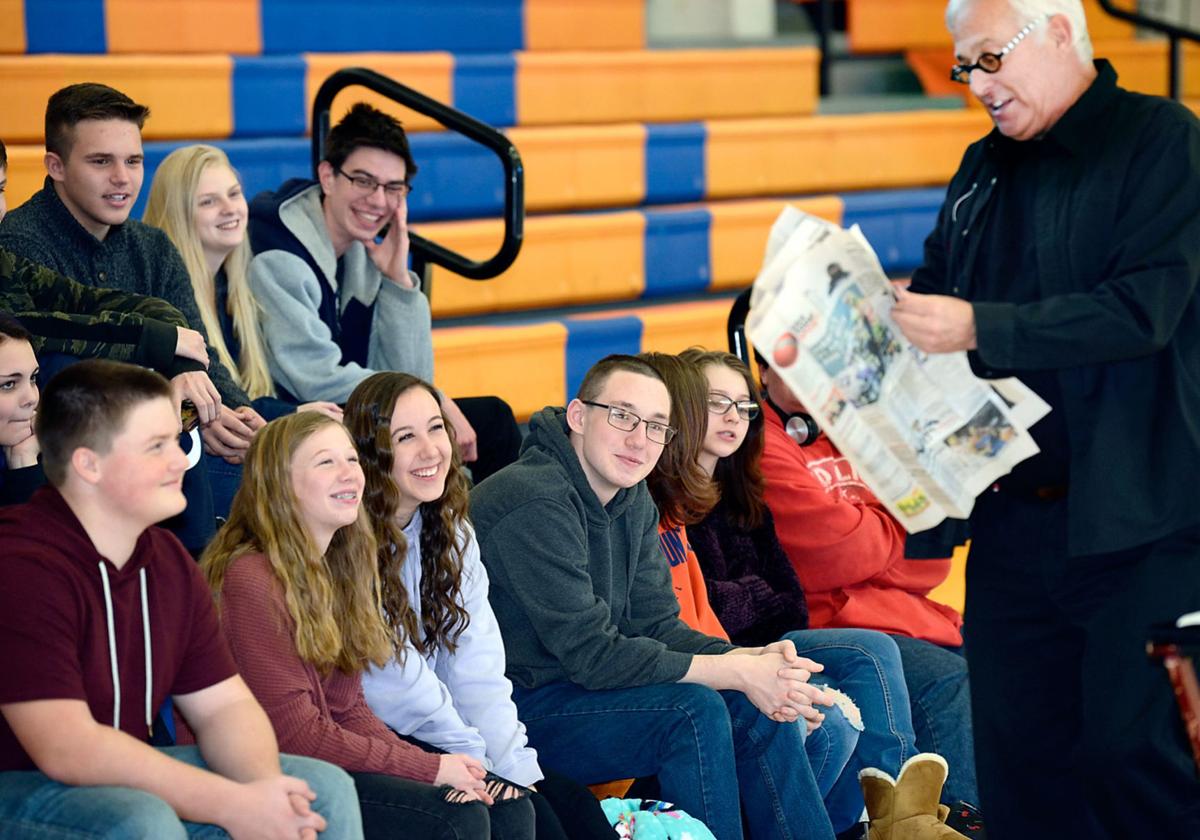 After appearing to rip apart a newspaper, magician Stephen Bargatze shows William Blount Ninth Grade Academy students the full sheets during an assembly on Wednesday. Through the program Bargatze also delivered serious messages to students about their choices and avoiding addiction. 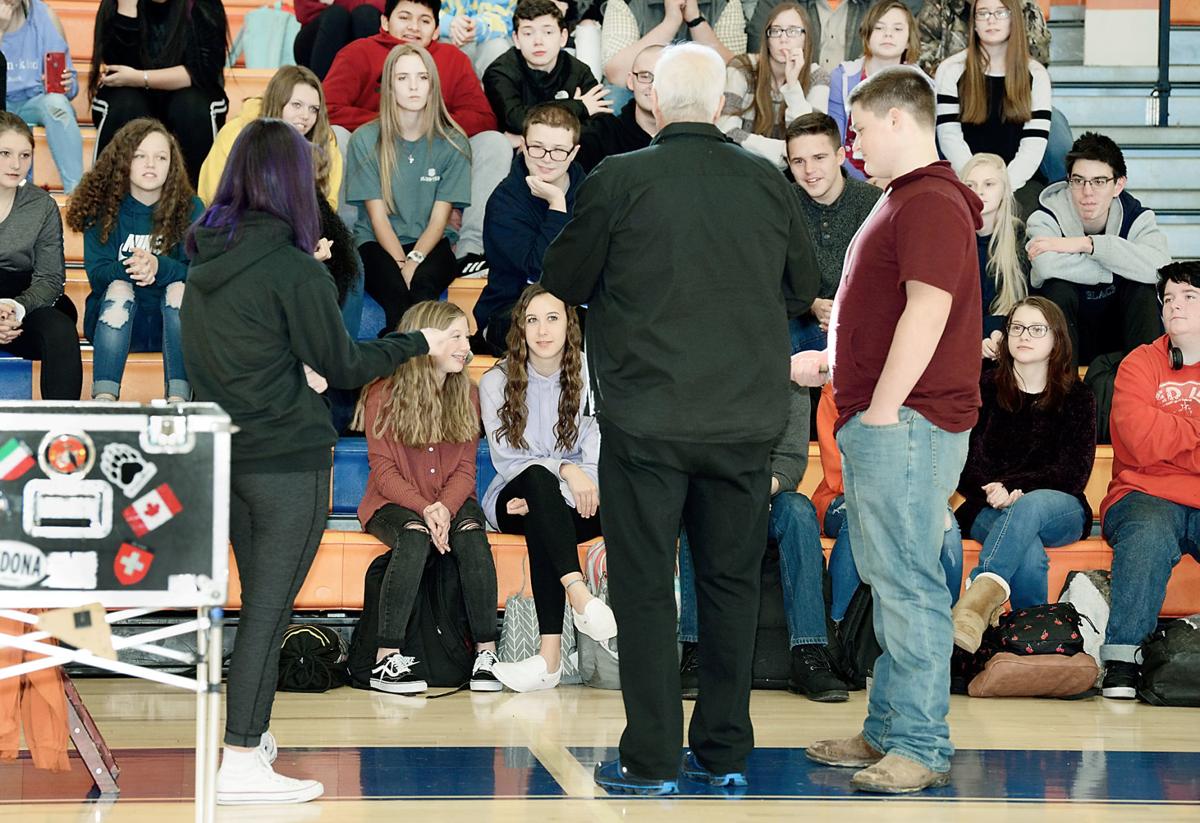 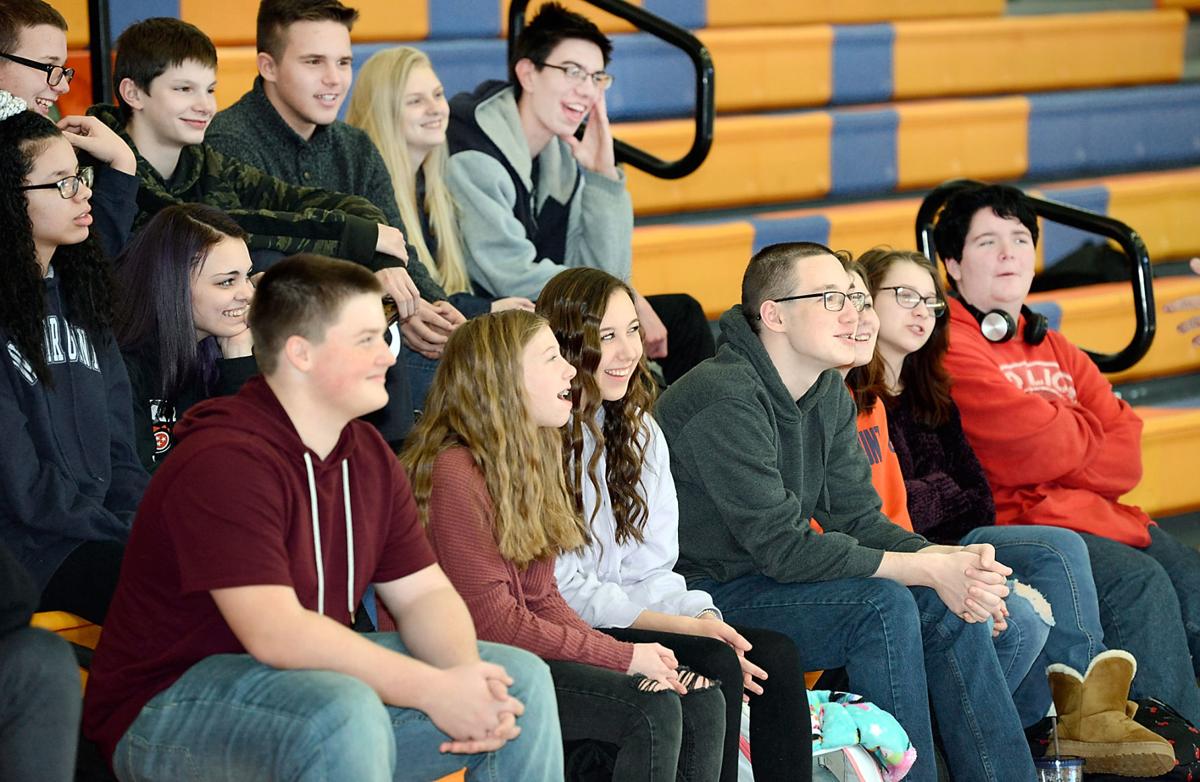 Stephen Bargatze prepares to perform a magic trick with a dollar bill borrowed from a William Blount Ninth Grade Academy student during an assembly Wednesday afternoon, Jan. 8. Bargatze is director of the TSSAA Right Team, which helps schools with topics such as drug prevention and student leadership.

After appearing to rip apart a newspaper, magician Stephen Bargatze shows William Blount Ninth Grade Academy students the full sheets during an assembly on Wednesday. Through the program Bargatze also delivered serious messages to students about their choices and avoiding addiction.

As quickly as a little white ball appeared to disappear from under a cup, the magician turned teens from laughter and astonishment to serious subjects.

Instead of pondering how a bowling ball he drew appeared to materialize and drop out of a paper tablet, they thought about weighty issues.

Like the jack and three of hearts appeared to switch positions beneath the shoes of their classmates during one trick, perhaps the students at the William Blount Ninth Grade Academy saw themselves in the life of Stephen Bargatze.

A magician for more than 40 years, he also told them about being raised by abusive and alcoholic parents, being bullied in school and attempting suicide as a teen.

Once a performer in Las Vegas, for more than 20 years Bargatze has worked with the Tennessee Secondary School Athletic Association.

He’s executive director of the TSSAA Right Team, which provides resources to schools on issues ranging from sportsmanship to drug prevention and race relations. With a grant from the Tennessee Highway Traffic Safety Office, schools are able to book a presentation for a nominal fee, and he performs at more than 150 across the state each year, as well as some beyond Tennessee.

Bargatze works with educators to customize his message. At one recent school he homed in on suicide. For William Blount, vaping was a priority.

He prefers to work with small groups, so in six performances on Wednesday he reached every student at the academy.

“This is going to get really weird,” Bargatze told the students early in his magic show.

After he distracted one girl with a ball trick while he took her watch and then made it reappear, she returned to the bleachers as she laughed and muttered, “I’ve never felt so dumb in my life.”

After half an hour, Bargatze turned serious, telling them about his alcoholic and abusive parents, whom he later learned were the product of numerous generations with those same problems.

Returning for his father’s funeral, he began discovering things about his parents and their parents that he never thought to ask before.

“They were broken; they didn’t know how to parent,” he explained to the teens. He continued with his sisters’ teen pregnancies, and their children going to prison for making methamphetamine.

“If you don’t stop, it gets worse,” Bargatze told the students.

He then hit on the influence of companies and culture on alcohol abuse and addiction.

At one part of his show, Bargatze makes an empty beer bottle appear, and he told the ninth graders that during a recent performance sixth graders said things like, “I’ll take that.”

Why do they think they have to at least pretend to like it, he asked. “Have you ever thought how many beer commercials you’ve looked at?”

“They’re telling us what it takes to be cool,” Bargatze said. “It’s the No. 1 killer for you, alcohol. The automobile and alcohol.”

The leading cause of death for teens is unintended injuries, such as vehicle accidents, followed by suicide.

Talking about the influence of tobacco companies, he asked, “Have you thought about vaping and what it is?”

“They need new people addicted to their products,” he answered.

Teens won’t stand up and say, “I’m not stupid; I’m not doing this,” Bargatze said. “We think its going to make us grown up or something. It’s just a company. It’s an addiction. It’s just a way for them to make money off of you the rest of your life.

“Stand up for yourself,” he urged the the teens.

It will take the government 10 years to put warning labels on vaping products, Bargatze said, “but you know it’s bad.”

Then he encouraged them to stand up for others.

Bargatze explained that he “talks funny” as the result of a dog attack when he was a child, followed by multiple plastic surgeries.

At school, he said, “every time I talked, somebody laughed.” He was placed in a special education class others referred to as a “retard class.”

When others didn’t smile or invite him to participate, he said. “I hung out with punks and thugs.”

After his arrest, Bargatze was beaten so badly by his parents that his injuries required surgery. Still, he said, he would rather be hit by his father than face the name calling at school.

“I don’t think we realize how badly we hurt each other,” he told the teens.

Today because of cellphones and the internet there is no escape. “It’s like being punched in the face 24 hours a day,” Bargatze said.

When kids make a mistake, it shows up online and others make fun of them.

Teen suicide rates are up 200%, he said. “You’re killing yourself.”

With the help of others, Bargatze said, he broke the chain in his family. He graduated from college and now has three children.

He was performing in Las Vegas when he learned his 17-year-old daughter was pregnant, so he and his wife rearranged their lives to support her and ensure that she could stay in school and continue to college.

One son is a missionary in Uganda, and the other is a comedian who has appeared on “The Tonight Show” and has a 2019 Netflix special, “The Tennessee Kid.” They have six grandchildren.

“When I was your age I tried to take my life — twice,” Bargatze told the teens, calling it a selfish decision and pointing to the many lives that exist now because he lived.

“You have a purpose,” he told them. “The decisions you make matter” and will affect others.