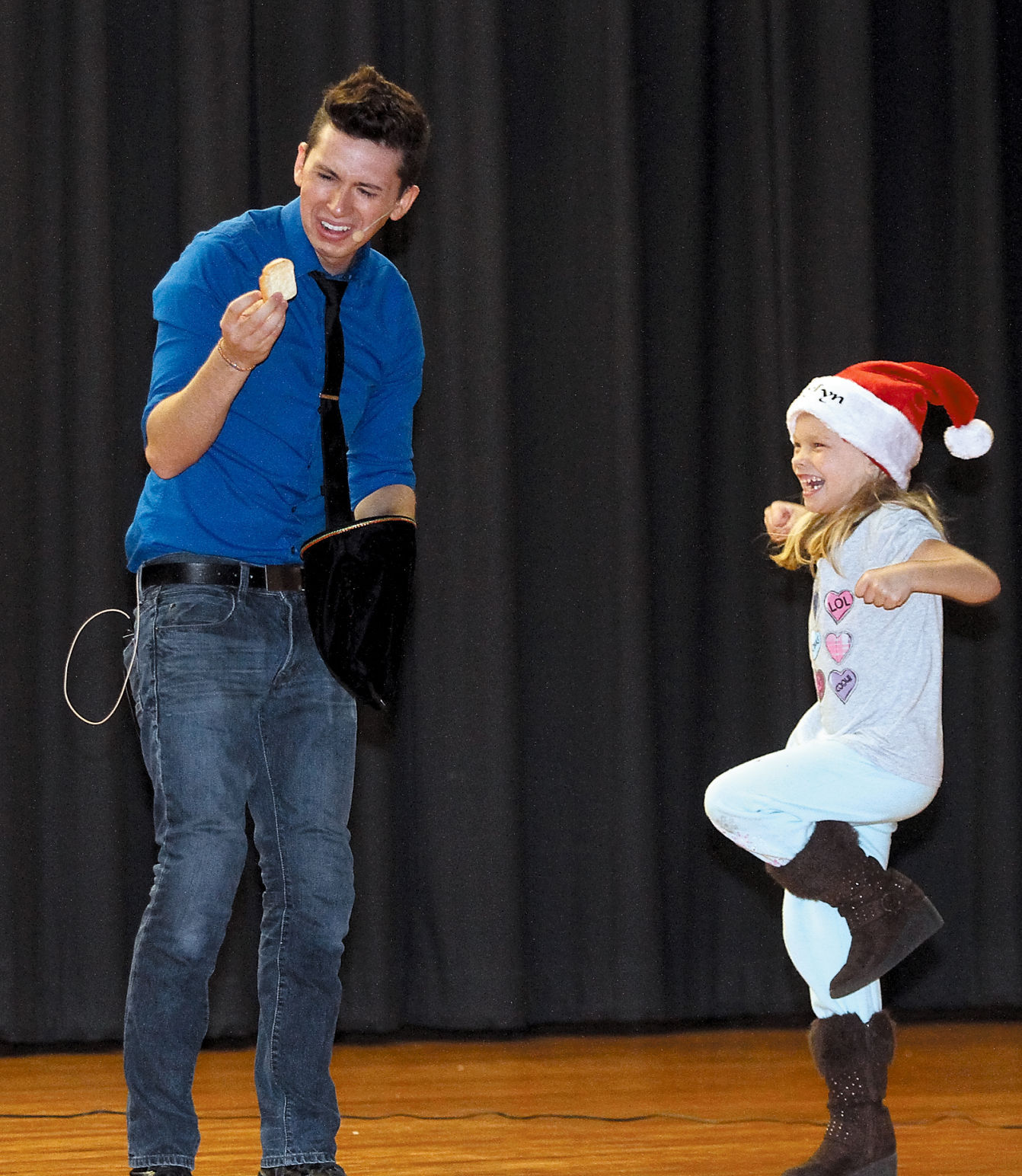 Porter Elementary School student Kaylyn Lonas reacts to magician Ben Young pulling a piece of bread out of a hat that was a handkerchief when he put it in the hat. 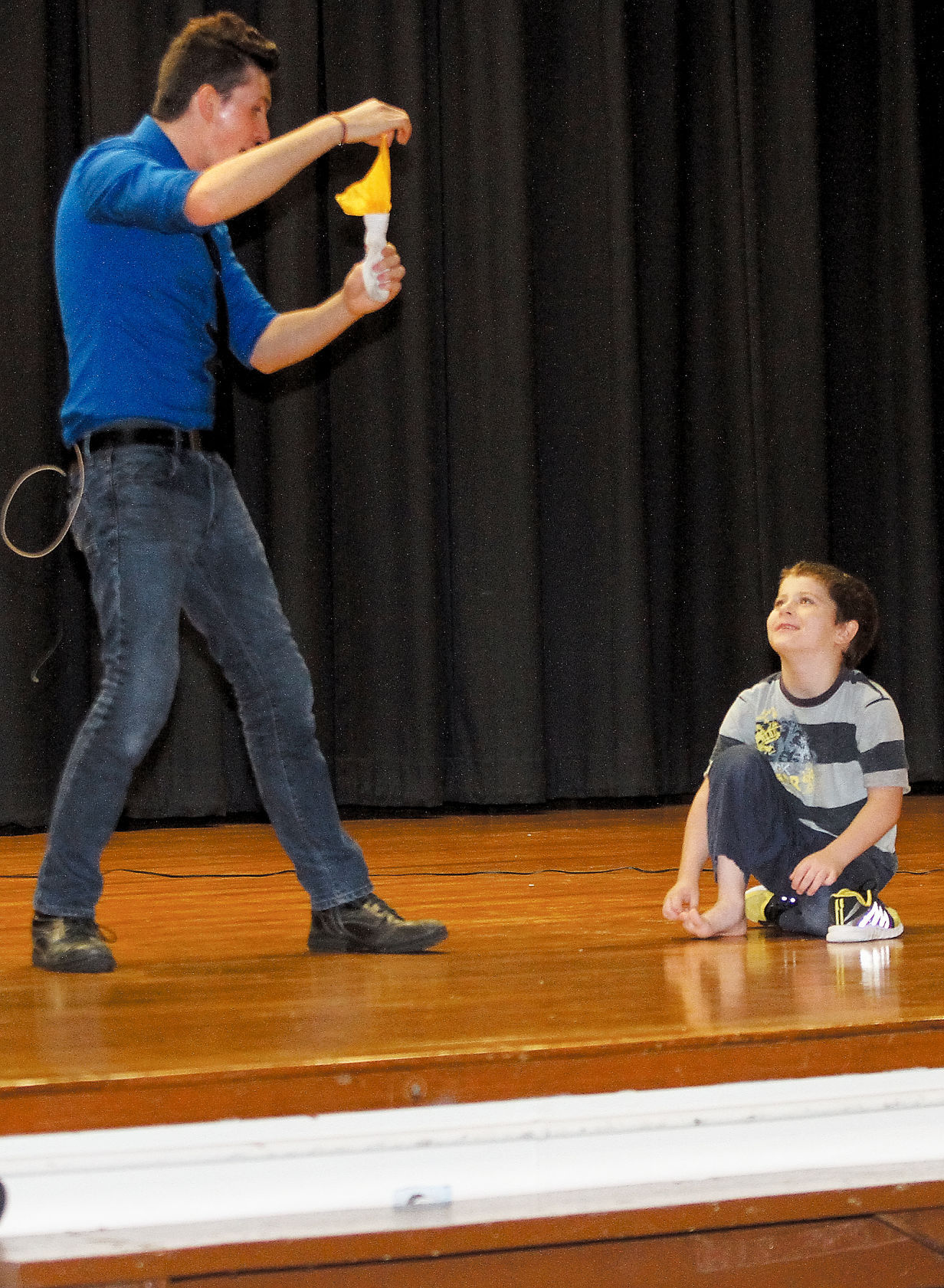 Porter Elementary School student Kaylyn Lonas reacts to magician Ben Young pulling a piece of bread out of a hat that was a handkerchief when he put it in the hat.

Porter Elementary School was closed Dec. 11 after being struck by theft and vandalism. Blount County authorities and school officials are offering a $1,250 reward for information leading to the arrest of the individuals who hit the school.

Corporate magician Ben Young learned about the crime two days later when he was sharing a hot beverage with father Phil Young, a second-grade teacher at Walland Elementary, at Vienna Coffee House. The son said he was “flabbergasted” by the incident.

“As soon as he told me about it, I knew I had to do something to help,” said Ben Young. “I told him that all of us in this community need to see what we can do for Porter. Magic shows are what I can do, so that’s what I’m doing.

“Children shouldn’t have low spirits, especially this time of year,” he said. “Everybody should be joyful and merry. It’s the holiday season. Magic is a great way to do that, because it’s a total escape, a total immersion. It’s an opportunity for me to help students through this difficult time.”

The magician came out Friday morning and performed two shows for the student body. He kicked off the shows with a trick in which he cut a piece of rope with his fingers and a pair of scissors, then put it back together and tied it in knots.

“It was definitely mind-blowing,” said fifth-grader Tate Frye. “I don’t know how he cut the rope, got it back together and made his knots slide.”

Young later performed a disappearing handkerchief magic trick. He stuffed a handkerchief into his hand, then “lost” it after touching it with his magic wand. He later brought a student onto stage in each performance to help him find it, then proceeded to ask them to find it on their persons. Each student found it in their socks.

The entertainer also performed a routine with a magic coloring book, which he said he borrowed from mother Patti Young, Coulter Grove Intermediate’s art teacher. He asked them to rub their shirts and throw the color at the book; opened the book and showed them it was full of color; then told them to erase it. He repeated this process several times, leaving the students rapt.

“I loved that trick,” said first-grader Kameron Hayes. “It was so funny.”

“I couldn’t stop laughing,” said first-grader Brynna Hayes. “Everybody was rubbing their shirts and throwing it at the book, then we’d erase it. He got kinda mad at us. It made me laugh a lot.”

Students, such as Tate, said they enjoyed the magic show. “It’s a good way to end the semester.”

“We’ve had a good year, so far,” said fifth-grader Lester Whitted. “Even with last week.”