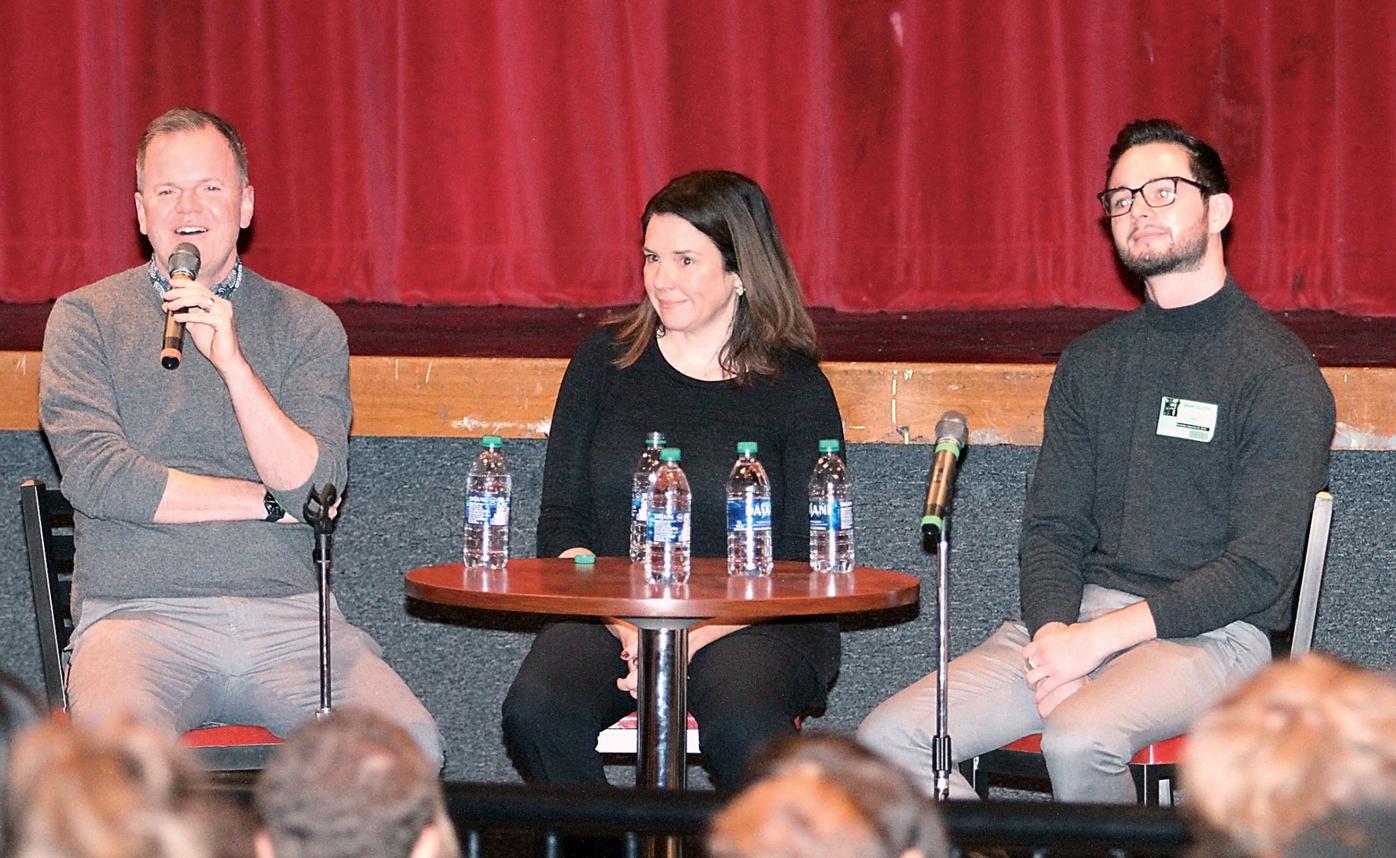 Alumni Steve Stanley (from left), Amy Piper and Brian Coulter talk to students about how Maryville High School prepared them for college and careers in the arts. Stanley is a filmmaker, Piper currently writes speeches and Coulter has been a production assistant in Los Angeles. 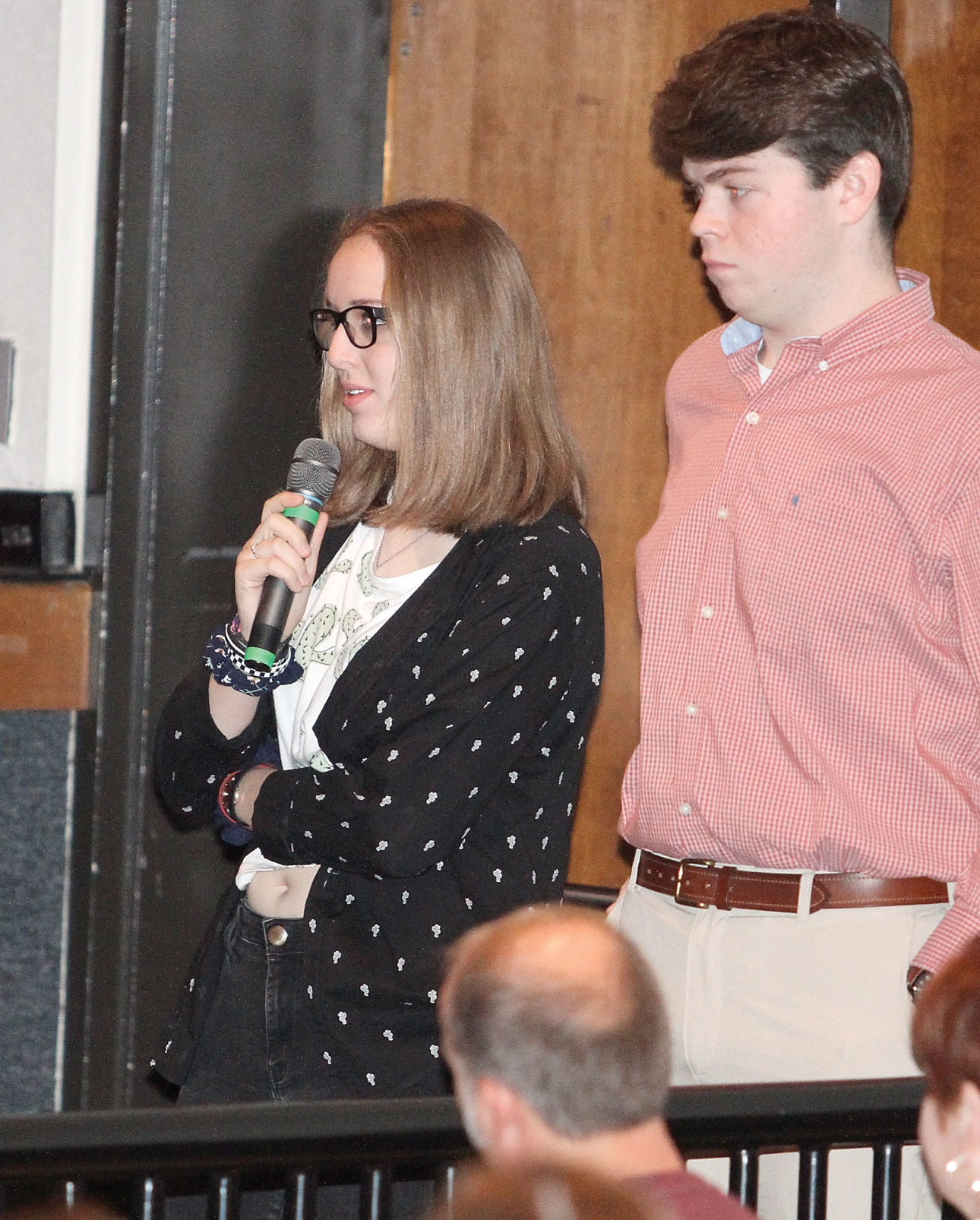 Erika Hill asks for advice about pursuing a career in film editing as moderator Riley Willingham listens Wednesday morning in the Maryville High School theater. Alumni Steve Stanley and Brian Coulter, who have worked in film and television, assured her there are many editing opportunities, and not just in Los Angeles.

Alumni Steve Stanley (from left), Amy Piper and Brian Coulter talk to students about how Maryville High School prepared them for college and careers in the arts. Stanley is a filmmaker, Piper currently writes speeches and Coulter has been a production assistant in Los Angeles.

Erika Hill asks for advice about pursuing a career in film editing as moderator Riley Willingham listens Wednesday morning in the Maryville High School theater. Alumni Steve Stanley and Brian Coulter, who have worked in film and television, assured her there are many editing opportunities, and not just in Los Angeles.

A career in the arts isn’t out of reach, three Maryville High School alumni told today’s students, encouraging them to say yes to opportunities.

When Steve Stanley graduated in 1990 and headed to Rhodes College in Memphis, he studied mathematics and religion before settling on French.

“I was going to be a French teacher,” he told Maryville students gathered in the high school theater Wednesday morning, Nov. 20.

But first he wrote “one fairly mediocre novel” with a friend before they decided their style was better suited for screenplays and began making their own movies.

A master’s degree in film and television from Savannah (Georgia) College of Art and Design (SCAD) led to an internship at a Los Angeles talent agency that Stanley said changed his life.

He intended to write and direct films but ended up working on financing projects for clients such as David Schwimmer. Then he ran a distribution company and started producing films and directing documentaries.

“A career in the arts is fantastic,” Stanley told the teens. But he encouraged them to figure out whether their passion will be a hobby or a job.

“There’s something beautiful about doing it as a hobby and just doing it for the love of it,” he said. “Doing it as a job changes your relationship with it. For me, it was worth doing full time, but I kind of had to constantly renew my joy about it, because sometimes you become jaded.”

Currently he’s a professor at the SCAD, which also gives him time to write and direct films, such as the documentary short “Conway Pride.”

Amy Gray Piper, Class of 1995, told the students her career journey has been “a twisty path, but a great one.”

“I knew that I loved the theater when I was 8 and I got cast as the dodo bird in ‘Alice in Wonderland’ at the Blount County Junior Playhouse,” she said.

The arts have been both a career and a hobby for her.

She performed in plays from high school through college, participating in the American Repertory Theatre in Boston and a summer theater program called The Cherubs at Northwestern University.

After she graduated from Harvard University with a degree in English, Piper said she didn’t feel like her parents thought acting was the best career choice, so she started looking at law schools. First, however, she submitted a play that she wrote to gain admission to Columbia University’s film school.

“I had no real business in film school, but I enjoyed it a whole lot,” she said.

Piper earned her law degree from the University of Virginia and practiced in New York before returning to Tennessee as an English teacher. Along the way one of her plays was produced “off off Broadway.” Today she’s working as a freelance speechwriter and researching what she called a passion project about prisoners of war who were kept in East Tennessee during World War II.

However, Brian pegs his passion for film production to the special features on a “Lord of the Rings” DVD describing how a particular scene was made.

Part of the “YouTube generation,” he confessed that he broke one family camera making movies before creating films with a friend who had a camera. He also worked on the Rebel Rewind videos at the high school before graduating in 2013.

After being one of the first students to earn a bachelor’s degree through a new University of Tennessee program in cinema studies, Coulter moved to Los Angeles and became a production assistant working on projects for National Geographic, PBS and the Discovery Channel.

All agreed that a willingness to try was key to their success.

“When the downside is really only going to be my bruised ego, go for it,” Piper said.

While in law school she sent a message to Nina Totenberg, legal affairs correspondent at National Public Radio, asking to work with the woman she had never met. When the first message received no reply, Piper sent another. Totenberg invited her to work on the program.

“Then I talked my law school into giving me a semester’s credit so that I could go work on radio stories about the Supreme Court,” Piper explained.

Stanley said one of the hardest parts of his career was moving to Los Angeles and finding “thousands of people who have the same dream.”

“The good news is there’s tons of opportunity,” he said.

Coulter cited the explosion of production avenues and noted he has friends being paid for projects such as editing Snapchat series.

Networking, mentors and apprenticeships are important, the alumni agreed.

“There are always going to be a hundred other people who can do exactly what you can do,” Coulter said. “Doorways open a lot easier when people open them for you.”

“The way you get into entertainment typically is by saying yes, you say yes to whatever you can,” Stanley said. “You’ve got to be really open and enthusiastic and say yes to things, but at the same time trust your instincts, and if it feels off it usually is.”

Stanley and Piper cited the value of their high school forensics experiences in later work.

“Public speaking is a huge part of any job,” he said. In the film industry you may have just 90 seconds to pitch an idea, and being able to convey ideas well is critical across fields, including advertising and engineering, he noted.

Stanley also served as executive producer for the documentary “Figures of Speech,” currently on Netflix, about high school debate teams.

Coulter said his high school theater experience gave him confidence to voice his own ideas before others.

Art teacher Raquel Roy asked the alumni to talk with the students about receiving feedback. She explained that it has become a joke in her class that when she corrects students she’s crushing hopes and dreams. “I’m trying to encourage and push them,” she said.

Stanley told the teens, “The best thing that someone can do is give you an honest critique.”