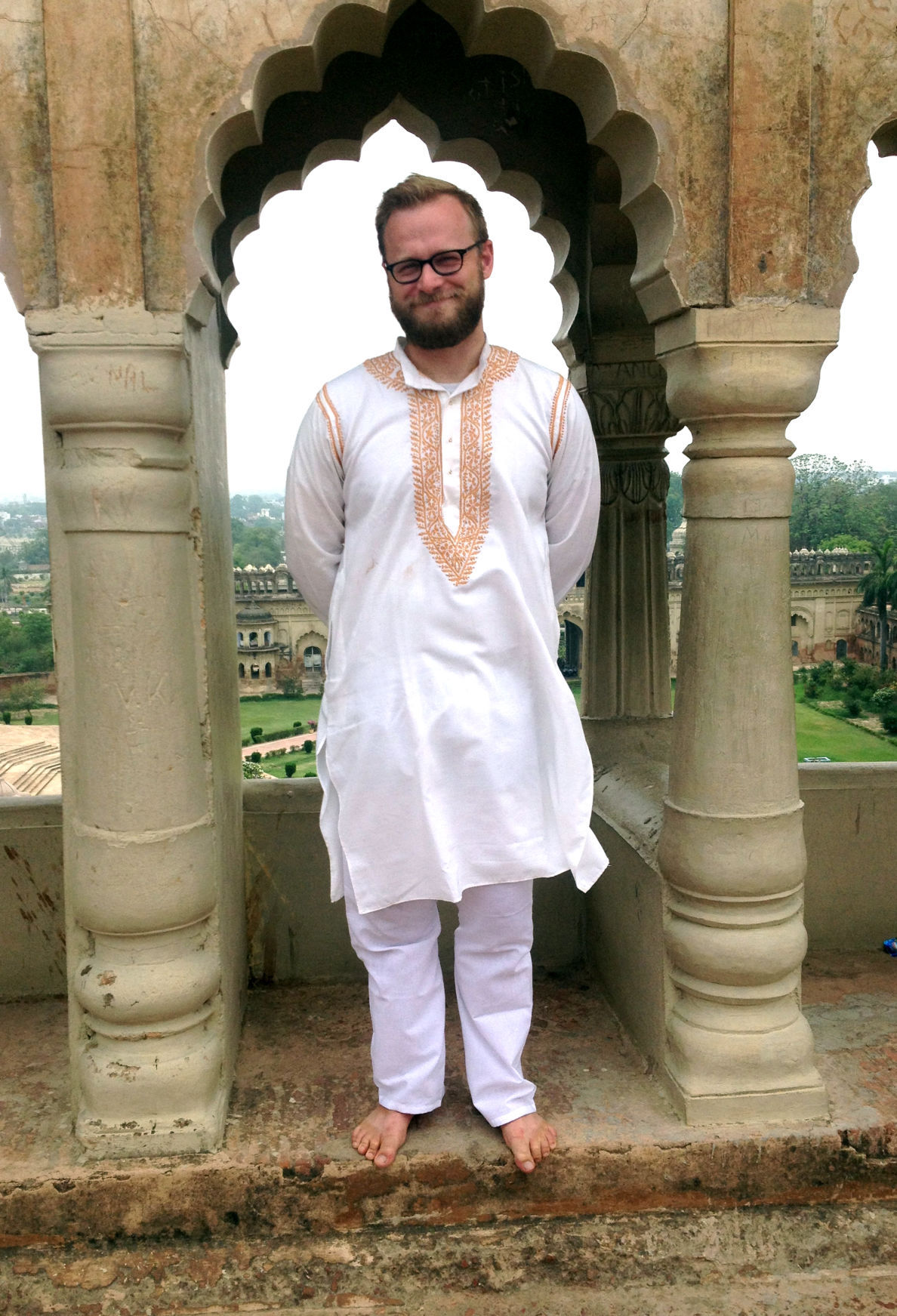 During a previous trip to India, Harrison Akins stands atop the Bara Imambara, a shrine in Lucknow built by Shia Muslims in 1784. 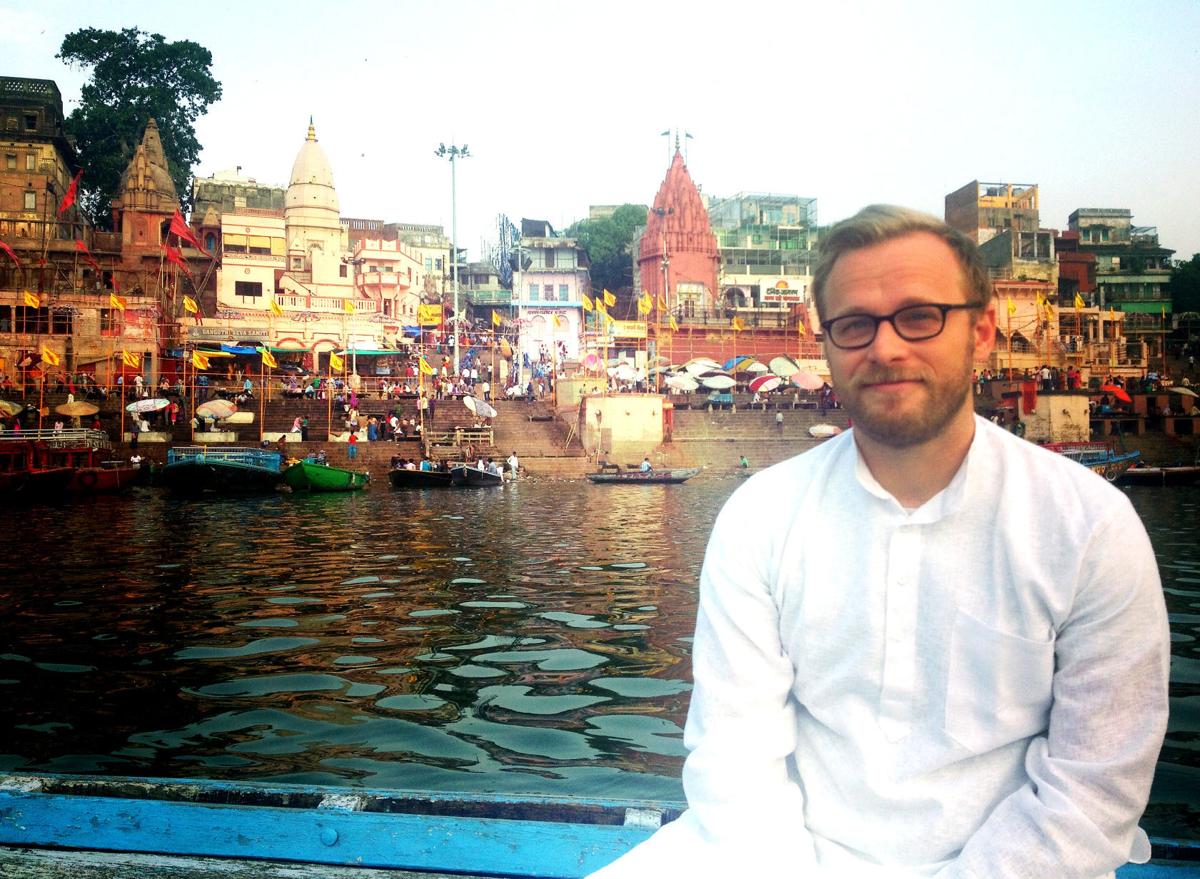 Maryville native Harrison Akins on the Ganges River in Varanasi during a previous trip to India.

During a previous trip to India, Harrison Akins stands atop the Bara Imambara, a shrine in Lucknow built by Shia Muslims in 1784.

Maryville native Harrison Akins on the Ganges River in Varanasi during a previous trip to India.

Harrison Akins knows that students in the “Contemporary Problems in International Relations” course he teaches at the University of Tennessee have no recollection of the world before Sept. 11, 2001, and he works to provide a more complete view than even the title of the class suggests.

Akins was in class at Maryville High School on 9/11. “I was a senior in high school, and I remember being very confused,” he said.

Akins always was interested in political science (his father Darrell Akins served in the Cabinet of then-Gov. Lamar Alexander and has a public strategy firm), but his interests became more focused while working with a former Pakistan ambassador to the United Kingdom and Ireland, Akbar Ahmed, the Ibn Khaldun Chair of Islamic Studies at American University.

Akins’ current research is focused on understanding the underlying causes of terrorism with the goal of shaping more effective policies. He’s looking at the social structures that shape views, such as the historic persecution and marginalization of Muslims in minority communities.

At AU’s School of International Service in Washington, D.C., Akins served as a lead research associate for Ahmed’s book, “The Thistle and the Drone: How America’s War on Terror Became a Global War on Tribal Islam.”

All religions have extremist elements, Akins noted, so to understand the roots of today’s terrorism requires understanding the background of conflicts in tribal areas. “It’s not religion; it’s other factors,” he explained. Not understanding that alienates potential allies and Muslims in our own country, he said.

Today Akins is working on his doctorate at UT and is a graduate research fellow at the Howard H. Baker Jr. Center for Public Policy. Last week (June 14) he returned to India for a second Critical Language Scholarship to study Urdu, the official language of Pakistan, which also is spoken in a number of other countries, including India, Afghanistan, Qatar and Saudi Arabia.

Urdu is one of 14 languages the U.S. government has identified that aren’t commonly taught in schools but are crucial to the country’s engagement in the world. The other languages are: Arabic, Azerbaijani, Bangla, Chinese, Hindi, Indonesian, Japanese, Korean, Persian, Punjabi, Russian, Swahili and Turkish.

Akins’ first travel abroad was a trip to Japan with his father at the age of 14, and he later taught English there. He earned his master’s degree at the London School of Economics and has traveled in Europe, Northern Africa and Southeast Asia.

Serving as a research fellow with Ahmed, Akins had been around people speaking Urdu and knew a few phrases before leaving for India last summer on his first scholarship to India. “I love Lucknow,” he said. “It’s a really beautiful city.”

“Lucknow is the heart of Shia Islam in India,” Akins said, and while Muslims make up about 15 percent of the population of India, in Lucknow it is 30 percent.

Going back to the 1500s, the city was under Shia rule and enjoyed the patronage of “nawabs,” Muslim noblemen. “They developed a strong center of Urdu literature,” so studying there is like going to Oxford to study English, Akins said.

The intensive, two-month program is like a year of studying a language, Akins said, and in addition to the classes the students live with a host family.

“Everything you do is in Urdu,” he said. “You take a pledge that you’re not going to speak any English for two months.”

Akins and his fellow students attend language classes from 9 a.m. to 1 p.m. every day. Then, he said, “You immediately go out into the city and use it.”

Urdu has a different alphabet, with words written phonetically and symbols for vowels that sometimes are left off, leading to difficulty pronouncing words for someone learning the language. The words are written right to left, and the grammar has a different order in sentences than English.

Still, Akins said, “It’s not as hard as people think it is,” no more difficult than learning German, for example.

Urdu has some words that sound familiar, but early on Akins misunderstood one word that is particularly important to Lucknow. When others spoke of a “chikan” shop, he thought they were referring to poultry, but soon learned that the word means “embroidery,” for which the city is famous.

Beyond the language, the students learn about history and culture. As part of that experience last summer, Akins learned to play the tabla, the most popular percussion instrument in India.

As a member of the orchestra at MHS, Akins played the viola, and he said the lessons teacher Bill Robinson instilled about discipline, practice and commitment have served him well beyond music.

He also credits history teacher Brooke Wilson with teaching him how to use primary sources and Dr. Penny Ferguson for teaching how to organize an essay.

“I was very fortunate to go to Maryville High School,” Akins said, and learning how to think critically has served him well.