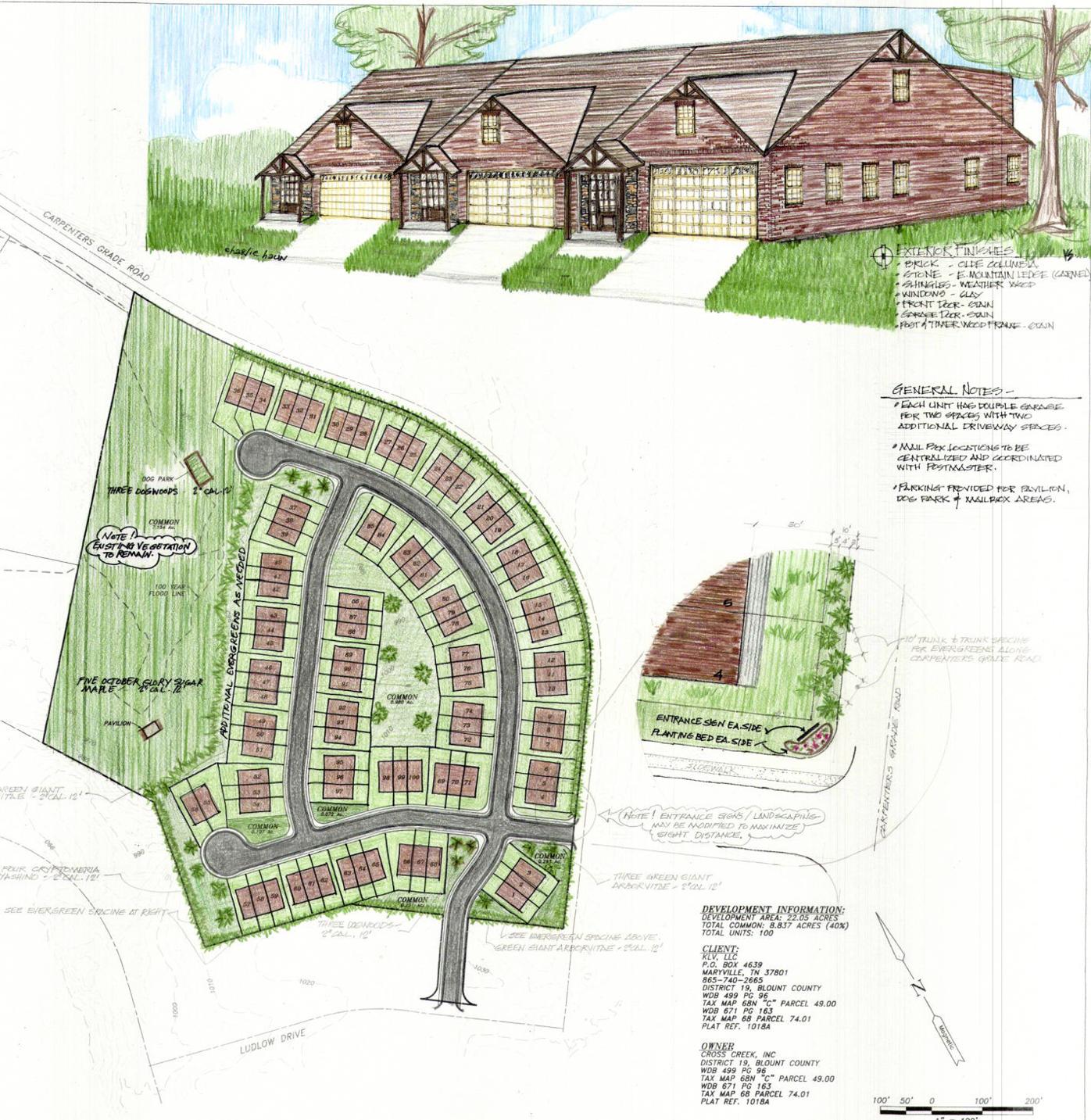 Designs submitted to the city of Maryville Planning Department show sketches of proposed townhomes set to be built for a 100-unit development off Carpenters Grade Road and Ludlow and Cross Creek drives. 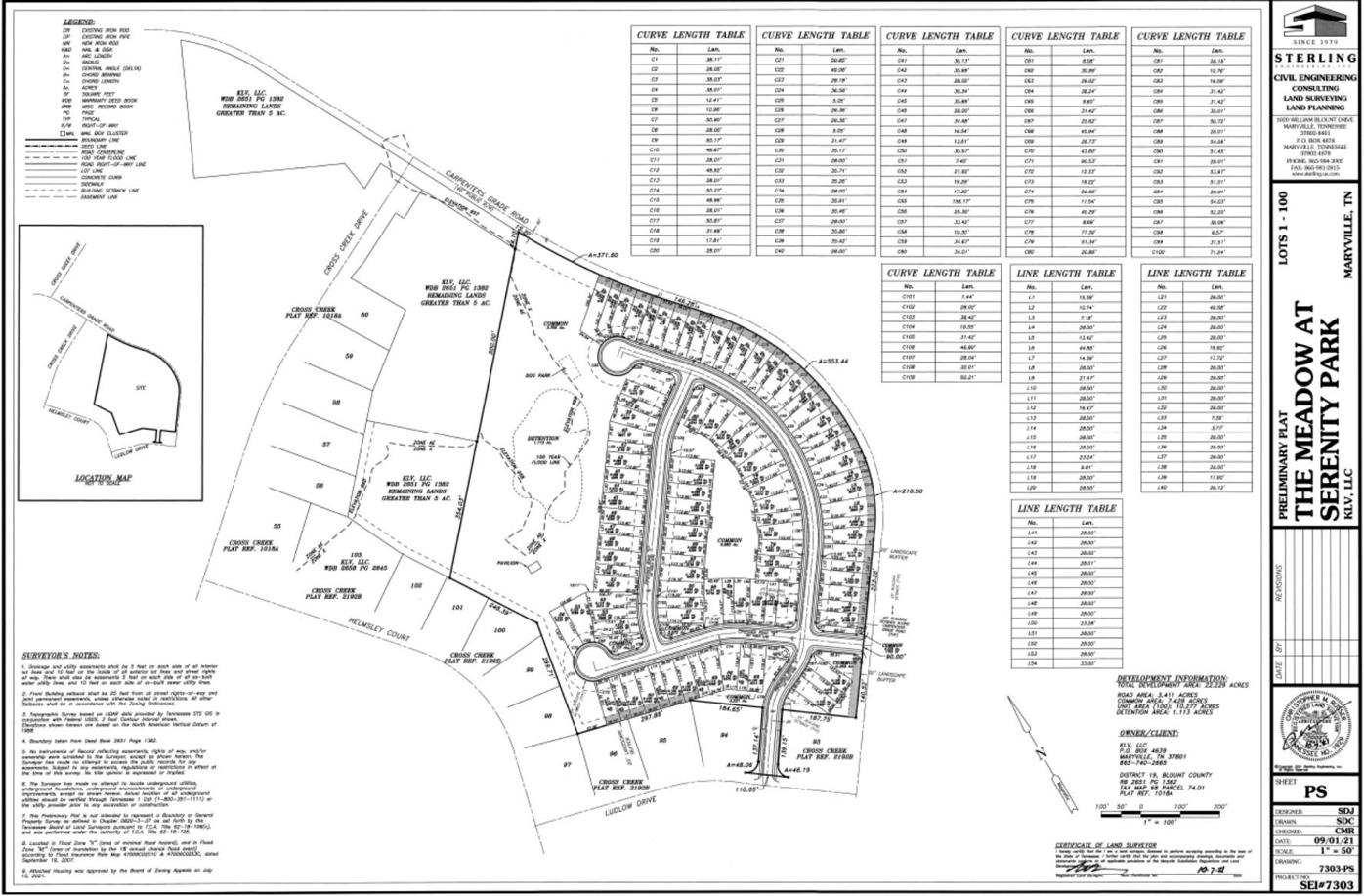 Maps from the city of Maryville Planning Department show preliminary designs for a 100-unit development planned off Carpenters Grade Road and Ludlow and Cross Creek drives.

Designs submitted to the city of Maryville Planning Department show sketches of proposed townhomes set to be built for a 100-unit development off Carpenters Grade Road and Ludlow and Cross Creek drives.

Maps from the city of Maryville Planning Department show preliminary designs for a 100-unit development planned off Carpenters Grade Road and Ludlow and Cross Creek drives.

The Maryville Municipal Planning Commission at its October meeting approved a 100-unit development off Carpenters Grade Road and recommended several items that will help a “land swap” between Maryville and Alcoa move forward.

The housing development preliminary site plan approval request came from KLC LLC which plans to call it “The Meadow at Serenity Park.”

It’s a planned 100-unit townhome project set to go in on just more than 22 acres at Carpenters Grade Road and Cross Creek and Ludlow drives in south Maryville.

That land is zoned residential and the townhouses can only be built there because the Maryville Board of Zoning Appeals in July granted a special exception for the development.

Notes from that meeting show the 100 townhouses would comprise 34 structures, each with two to three attached dwellings.

About 4 acres on the property would be reserved for green space.

The July meeting revealed concerns some residents had about the project;they were outlined in letters sent to city staff by people who live close to the proposed subdivision.

“A fear is that creating compact densely formed townhouses will not be in ‘keeping’ with the current area,” one White Oak Avenue resident wrote.

“Cross Creek Subdivision is already a busy neighborhood filled with families and kids,” wrote another resident, who lives on Warwick Avenue. “Adding one hundred townhouse units will only add chaos and congestion at the entrance of Ludlow Drive and Carpenter’s Grade Road. The congestion intensifies when Maryville City Schools are in session.”

So significant would the growth in that area be that developers also completed a 131-page traffic study for the area in September.

“This development is anticipated to be fully built out and occupied by 2025 and proposes two entrances,” a preface to the study explains. “With 100 multi-family attached townhouses, the Carpenters Grade Road Townhouses development is calculated to generate 954 trips on an average weekday at full build-out and occupancy. Of these daily trips, 53 new vehicle trips will occur during the AM peak hour and 77 trips in the PM peak hour.”

Other residents expressed their support for the development, noting they knew the developer KLV’s Jay Blevins to have a sound reputation.

Before construction at the site could commence, the project will need another round of site plan approval since designs approved last week were only preliminary.

Planning commissioners at the Oct. 18 meeting also approved four items that effectively help pave the way for what’s been called a “land swap” between the cities of Maryville and Alcoa.

The land in question is Partnership Park North off Proffitt Springs Drive just west of the McGhee Tyson Airport runway, and is the future home to Smith & Wesson headquarters and manufacturing operations.

“Swap” in this case means Maryville will annex the land and Alcoa will de-annex it. There are two parcels under consideration for this move, 268 acres in total.

The four items included a request for annexation, a plan of services for the property, a future land use map designation and a zoning designation for the land.

The Planning Commission approved all unanimously and will forward the items to Maryville City Council which, on Nov. 2, is set to hold a public hearing on the items and vote on them for the first time.

Four items approved during Maryville Municipal Planning Commission's Oct. 18 meeting are some of the first steps by city government to annex P…

PDF documents including the traffic impact study for the Cross Creek subdivision development and the Maryville Planning Department assessment of the land swap are available with the online version of this article for download at thedailytimes.com.