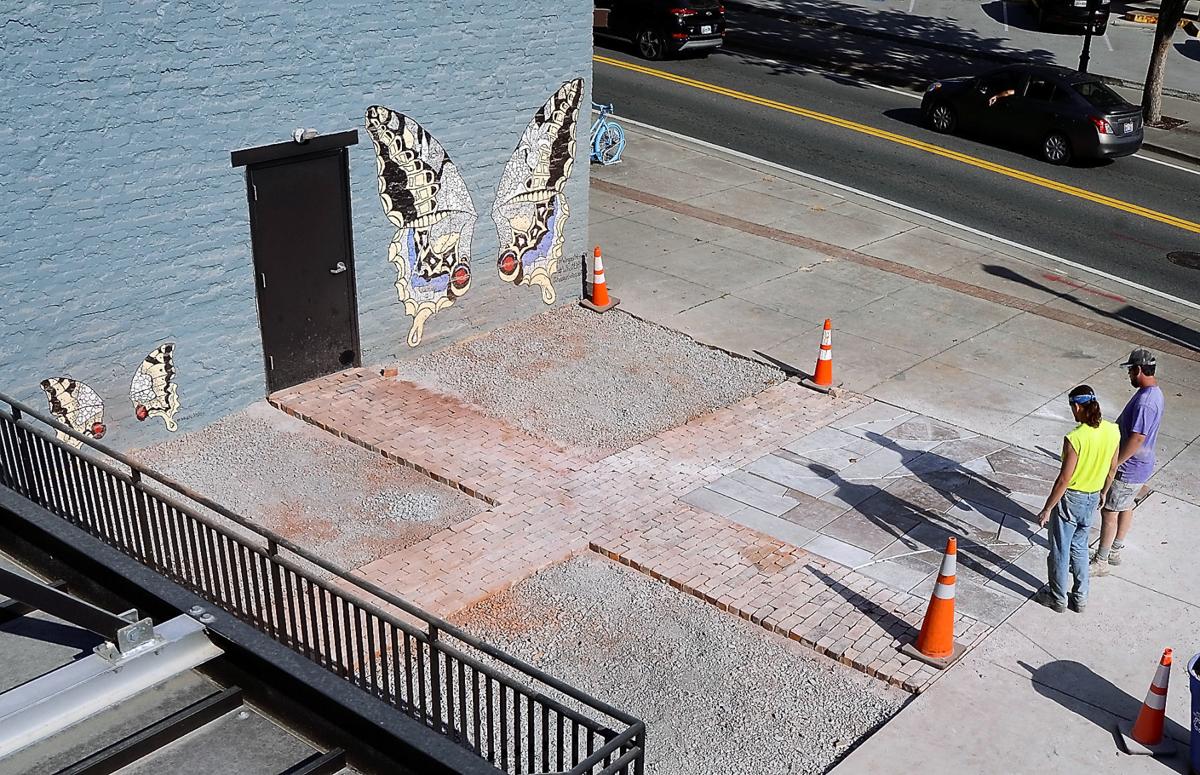 Toby Morgan (Left) and Nick Johnson, of Seeds of Change Landscaping, look over their work before finishing for the day in October at the butterfly pocket park on Broadway Avenue in downtown Maryville. 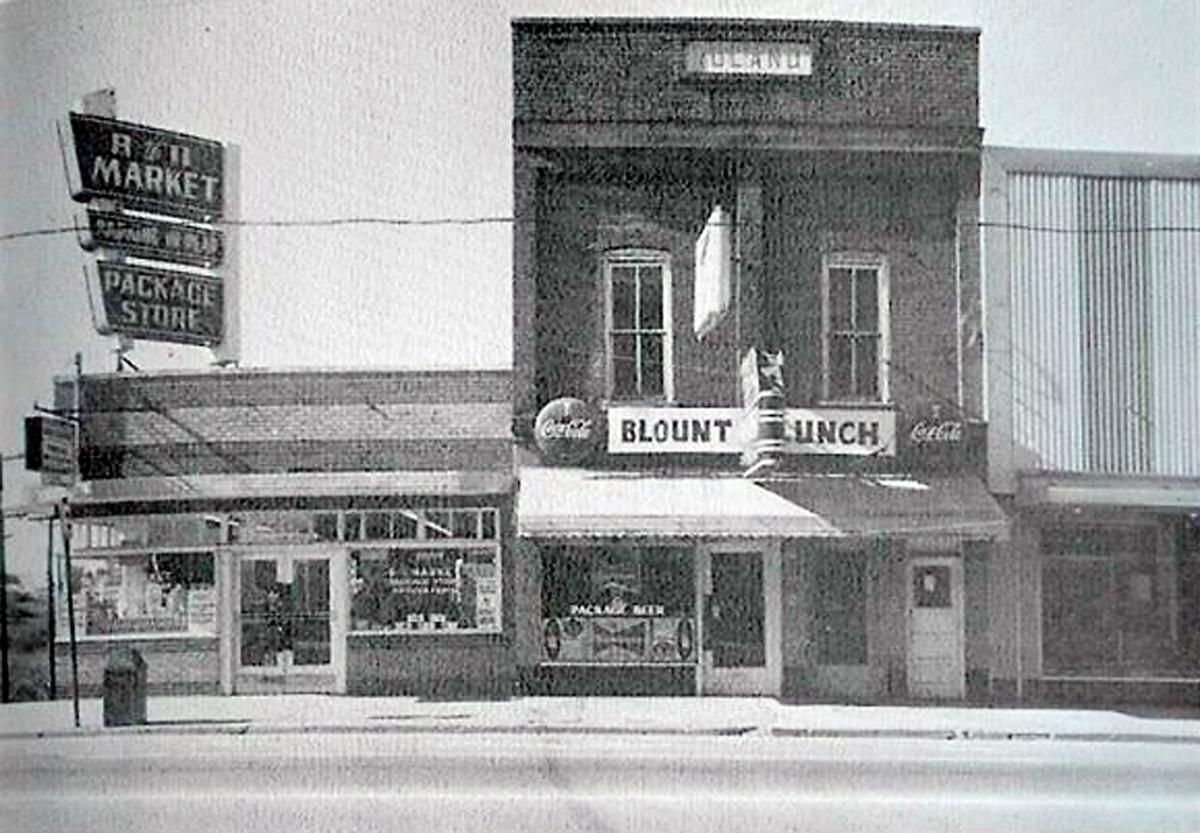 The Blount Lunch Cafe stands on Broadway Avenue in Maryville where the butterfly pocket park is today in this undated photo. The open space to the left of the market/package store next door was Love Street that extended from Harper Avenue to Church Avenue.

Toby Morgan (Left) and Nick Johnson, of Seeds of Change Landscaping, look over their work before finishing for the day in October at the butterfly pocket park on Broadway Avenue in downtown Maryville.

The Blount Lunch Cafe stands on Broadway Avenue in Maryville where the butterfly pocket park is today in this undated photo. The open space to the left of the market/package store next door was Love Street that extended from Harper Avenue to Church Avenue.

Maybe you made it to the unveiling of the painted butterflies on the wall at the Uncorked celebration held by the Maryville Downtown Association in October and had your picture taken by Robin Richmond of Tickled Orange Photo Booth.

That’s when people got a closeup look at the winged mural done by muralist Kelsey Montague. She’s renowned worldwide for her interactive public art in the form of winged murals displayed across the States to Europe, from Cape Town in South Africa to Melbourne in Australia.

In Maryville, her two beautiful butterflies spread their wings for posed photos with a personal touch, one adult-sized, the other perfect for kids and pets.

The Uncorked unveiling completed phase one of this little park on city property that is being created as a cooperative effort spearheaded by MDA, the city of Maryville and Substance Solutions. Laura Hasson, co-owner of the medical billing company she operates, pursued Montague to do the mural on her building and paid to have it done.

Maybe you, maybe not

Perhaps your were driving down Broadway on a nice day recently and noticed 10 people lined up to get their pictures taken with the mural. That anecdotal evidence of the attraction of the new wall painting was shared by Lauren Emert, Blount Partnership director of economic development, with MDA members during their meeting Thursday at Downtown Social.

Maybe you’ve neither seen nor heard any of it. If that’s the case, you haven’t stopped by the pocket park lately and are unaware that phase two is complete.

It took some dirty work to get it done. About a dozen volunteers worked in last summer’s heat to rescue about 600 old bricks that have been repurposed to form pathways crossing the park.

The bricks didn’t have to be hauled from afar. They were salvaged by digging in dirt, pulling the kilned clay discarded from a demolished building near where the Harper Avenue Parking Garage stands today. The bricks were found in the gap between the garage and the wall of the refurbished Substance Solutions building, formerly Sterchi’s, before that a bus depot at 133 W. Broadway Ave.

The old bricks almost certainly came from the Poland Building that housed the Blount Lunch Cafe and stood where the butterfly pocket park is today.

Completing the floor of the park are pieces of marble from Tennessee Marble Co. in Friendsville. The installation was done by landscapers with Seeds of Change. Close observers of the hardscape will notice the close tolerances between the variably shaped slabs of marble. The pieces weren’t simply random leftovers from Tennessee Marble projects, but carefully selected and cut for the butterfly park.

Plans for phase three are well underway, but not set in stone. Yet to come are a pawpaw tree that attracts zebra swallowtail butterflies, bushes favored by butterflies, benches, bistro tables — all paid for by the city of Maryville, which owns the property as well as the Harper Street Parking Garage that forms the back wall of the park beyond the drains.

Aaron Killian, president of the MDA Board of Directors, said that’s the plan as laid out to MDA members by Josh Buchanan, who works for Tennessee Marble and acts as design consultant for the downtown group.

The original concept plan for the butterfly pocket park calls for a mural to be placed on the parking garage wall. Ideas ranged from a mural on canvas featuring a picture of the old bus station, to a vinyl mural with an image of Broadway Avenue packed with Blount Countians eager in 1939 to get tickets for the Maryville premiere of “Gone with the Wind.”

Buchanan said the city has asked that action on a mural at that site be put on hold for a while. City Manager Greg McClain confirmed that. He explained why on Friday.

Let’s talk about it

McClain noted that the city has been in discussions with various interested groups ranging from tourism officials to Maryville College about how to proceed with murals.

“I think everybody’s okay with the idea of murals, it’s just the mechanics of how do you do it? Pick where and what is it? What theme to use?” McClain asked.

Murals already exist. Those include old advertising painted on exterior walls, almost ghosted out now, that people want to restore. And more.

“There’s a lot of stuff regarding painting buildings. What I want to do before we just say ‘go do that,’ let’s have a conversation. In the midst of all that we’ve had, the wall across from the courthouse, the back of Brackin’s, the mural underneath the bridge (Broadway overpass). And while that’s fine, I’d really love, before we just keep marching forward piecemeal, I’d like to have a comprehensive approach,” McClain said.

Should there be a theme where murals would be historical? How about fresh and current and artistic? The idea of portable murals that could be moved about downtown on a seasonal basis has drawn interest.

“I think it would just be a fun effort to get everybody in a room and let’s talk about possibilities of what we could do. We hope to do that,” McClain said. “We’d hoped to have done it before now, but there are so many other pressing matters. We are definitely going to try and get on that this year, if at all possible.”

A decision on another mural won’t hold up phase three of the butterfly pocket park. That’s still good to go with completion expected this spring. Killian said a special treat is being planned for the celebration — the release of butterflies in downtown Maryville.