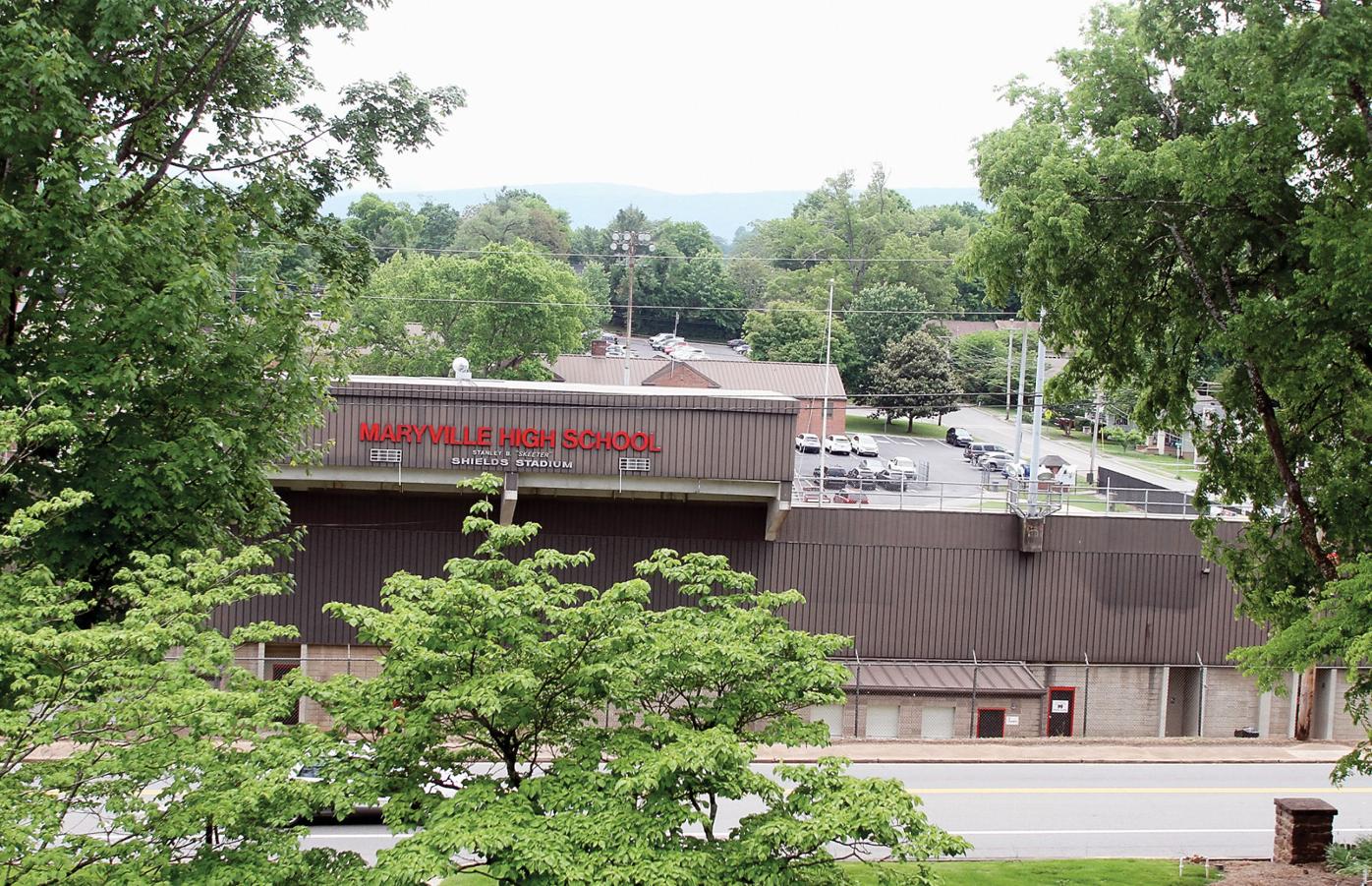 The view from the second story of 819 W. Broadway Ave. shows the Maryville High School football stadium, where Tower Ventures wants to replace one of the 60-foot light poles behind the visitor seats with a tower at least 120 feet tall. 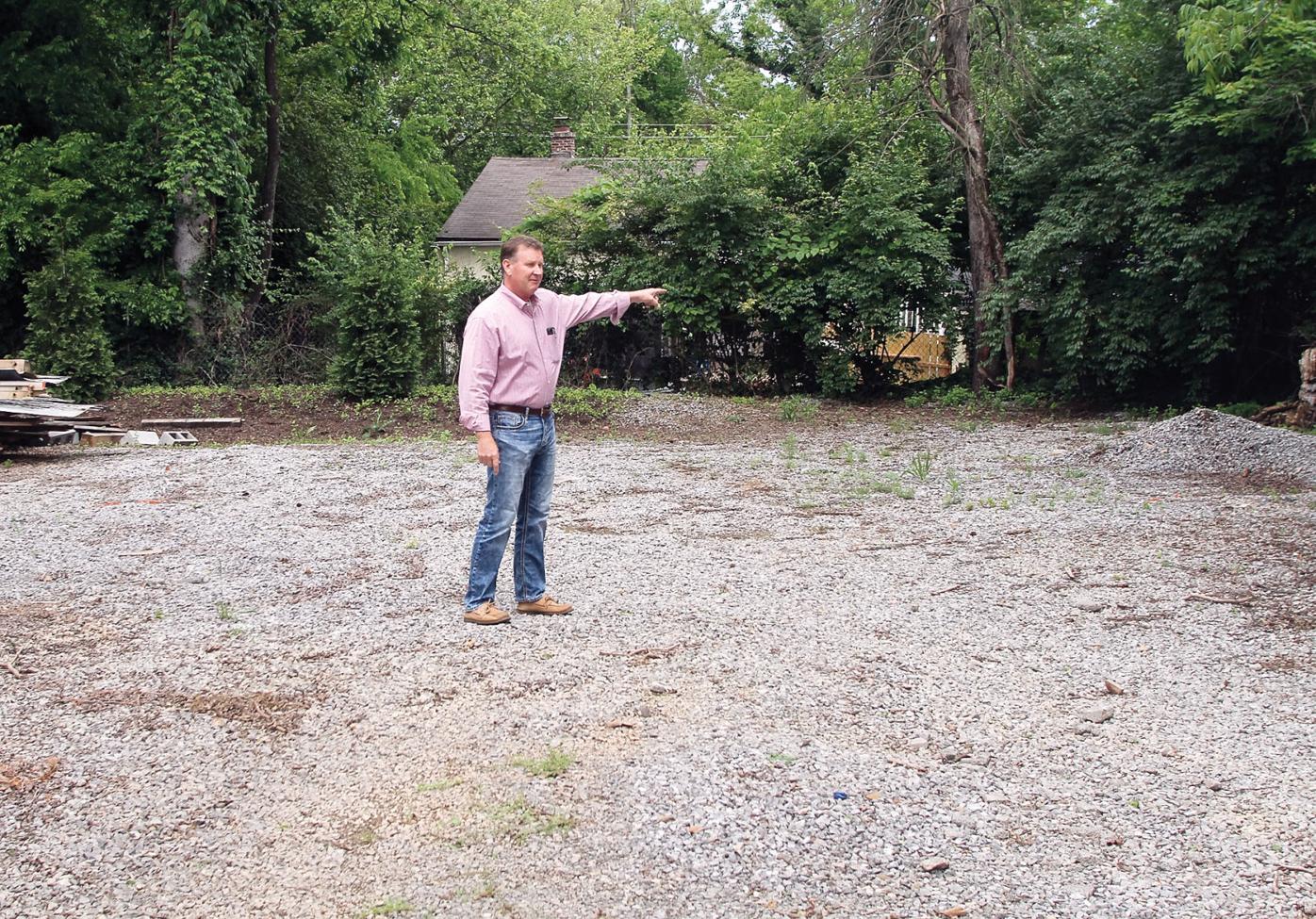 Jay Blevins shows where a cell tower could be placed in the back of the property at 819 W. Broadway Ave. in Maryville. Blevins told the Maryville Board of Education this week he isn't in favor of any tower, but if one is needed to improve service at the high school campus, he would rather it be placed on that lot instead of replacing a light pole at the football stadium with a tower at least twice as tall.

The view from the second story of 819 W. Broadway Ave. shows the Maryville High School football stadium, where Tower Ventures wants to replace one of the 60-foot light poles behind the visitor seats with a tower at least 120 feet tall.

Jay Blevins shows where a cell tower could be placed in the back of the property at 819 W. Broadway Ave. in Maryville. Blevins told the Maryville Board of Education this week he isn't in favor of any tower, but if one is needed to improve service at the high school campus, he would rather it be placed on that lot instead of replacing a light pole at the football stadium with a tower at least twice as tall.

The Maryville Board of Education on Monday tabled a proposal to place a cellphone tower at the high school football stadium in order to further study the options.

While most board members appeared ready to vote for the proposal — some reluctantly — when it came up on the agenda, hearing about a potential alternate location gave some pause.

Real estate agent Jay Blevins told the board he’d rather not have a tower nearby, but if one is necessary for better phone service at Maryville High School, he’d rather it be at the back of property he co-owns across the street than part of his view of the stadium and foothills in the distance.

When discussion began Bethany Pope was the only board member to say she would vote against the proposal from Memphis-based Tower Ventures, which not only would improve service in the area but also give the school district up to $100,000 in one-time payments and $5,000 a month if four carriers use the proposed tower.

The proposal would replace a 60-foot light tower pole on the visitor side of the high school football stadium with a cellular tower at least double that height.

“I am completely against this,” Pope said. “I don’t want to look at this when I drive downtown. I think it will be an eyesore. I’m shocked that the people around there, some of the houses, haven’t come forward. Maybe they just don’t know about it yet.”

She called cell towers a “necessary evil” but said she doesn’t want one on the high school grounds.

Board member Candy Morgan said while it may be an eyesore she would be for it. “My concern is for the lack of reception at the high school,” she said. “There is so much happening in our world today I just would hate for there to be a delay of getting emergency personnel there.”

Board member Julie Elder said she agreed with Morgan. Elder said she was in the cafeteria recently and had no reception, missing several calls and texts. She said the coverage problem extends to the junior high campus. If Tower Ventures is going to place the equipment somewhere in the area, Elder said, she would rather the students benefit financially, and the 35-year lease would provide a good income stream.

Pope asked about the possibility of signal boosters to improve coverage, but Director Mike Winstead said a study several years ago determined the existing signal was not strong enough to boost.

Lou Katzerman, senior site acquisition and zoning manager for Tower Ventures, said the view would not change much because the field lights would be placed at the same height as before and associated equipment would be under the visitors’ bleachers.

Pope asked what other properties the company had approached. Katzerman said New Providence Presbyterian Church initially agreed but withdrew, and the company looked across the street from the stadium at 819. W. Broadway Ave., where Lamon and McDaniel Builders and Blevins have their offices.

Katzerman said because the area is near a historic district approval at the state and federal level is more likely with a design changing an existing light stand. “They’re already looking at a pole with lights on it,” he said. “They only difference is there will be antennas on the top.”

While locations in other cities have been controversial, Katzerman said a cell tower is something “people need, want and definitely will use.”

Board member Chad Hampton said the potential benefits are obvious in coverage and finances. “We are externalizing these costs to the neighboring property owners, the eyesore, whatever reduction in property values they have,” he said.

“If we turn this down, are you telling me there’s a good chance you’re going to put this across the street?” he asked.

“Yes,” Katzerman replied. Pope asked whether it would be better hidden across the street.

“I think it’s better hidden as a light stand than a pine tree,” he said. Katzerman also told the board, “It’s never been proven that there’s an appreciable decrease in (home) value with cell towers.”

He also suggested that cell coverage can increase the value of a home.

Hampton said that like a landfill this is a NIMBY — Not In My Back Yard — problem.

At that point Hampton said he had been on the fence but would vote to approve since there likely would be a tower somewhere and others also would have to approve the project.

Chairman Nick Black said he also had been torn about the issue. “It will be an eyesore,” he said, but the enhanced coverage would be important.

Then during the public comment period Blevins told the board that he would rather not have a tower anywhere in the area. However, the spot proposed at the back of the property he shares with Lamon and McDaniel Builders offers the most hidden location,he said, behind a detached garage and large tree that would remain in place.

Blevins said the view from the conference room in the restored 1901 home is his life’s dream, with the MHS football stadium and foothills in the background, but that’s where the proposed tower would be.

“I just don’t want it dead in front of my building,” he said. “If you’ll find another place for it you’ll get my vote and I’ll shut up. But I’ll fight it tooth and nail instead of where they’re planning to put it right now.”

Katzerman said his company had been told approval for the Lamon and McDaniel Builders site would be “extremely tough” and could take two years only to ultimately be turned down, while he expects the school proposal could clear all hurdles in nine months to a year.

Ultimately the board tabled the proposal with a voice vote, after a motion from Pope that Hampton seconded, explaining that he wanted to know more about the process.

Both properties are in Maryville’s Central Community Zone and any application to place a cellphone tower would have to go through the city’s Board of Zoning Appeals for a special exception permit, according to Angie Luckie, public services director.