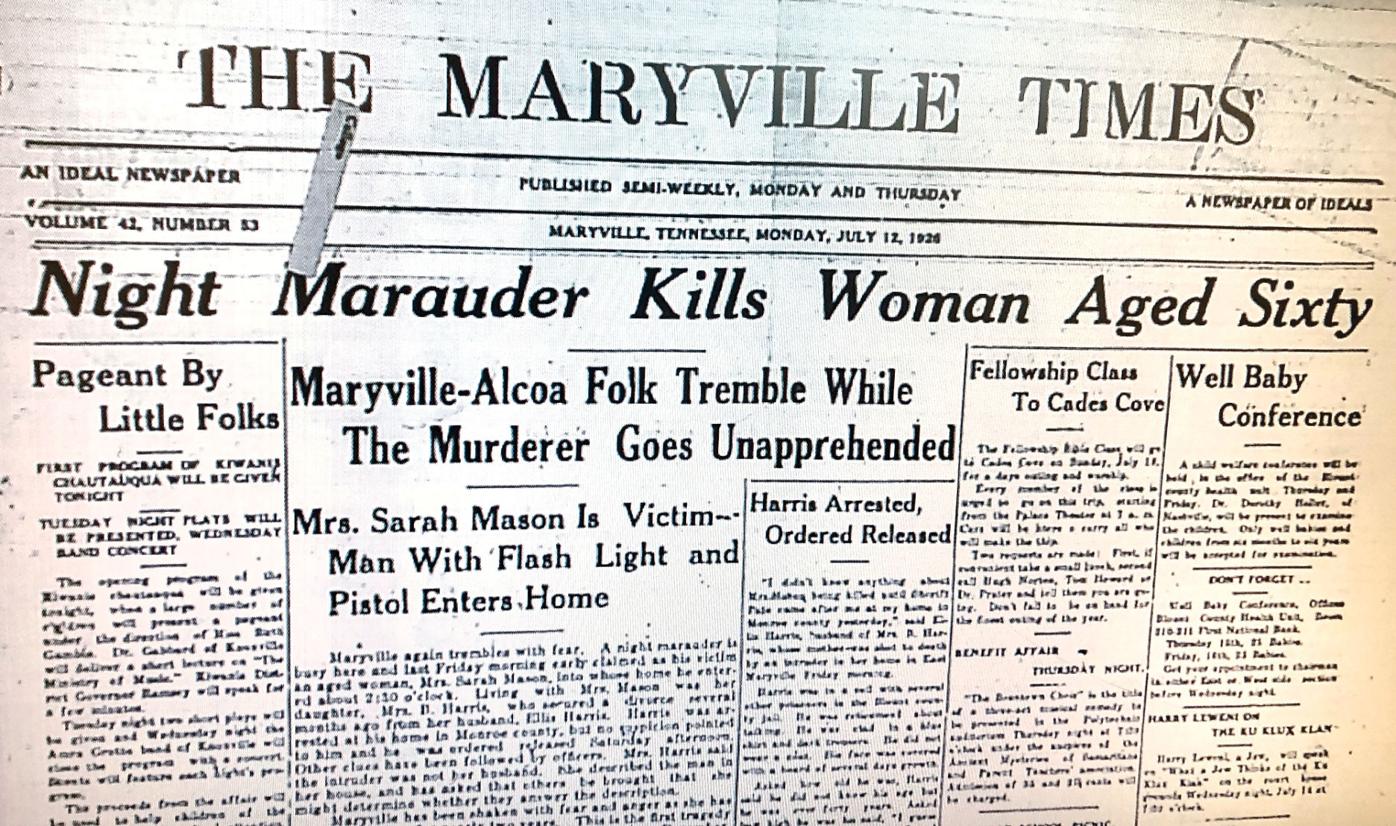 The Maryville Times in 1926 covered the case of the “Night Marauder,” who was suspected of murders and assaults in Maryville, Alcoa and Knoxville over several years about a century ago. 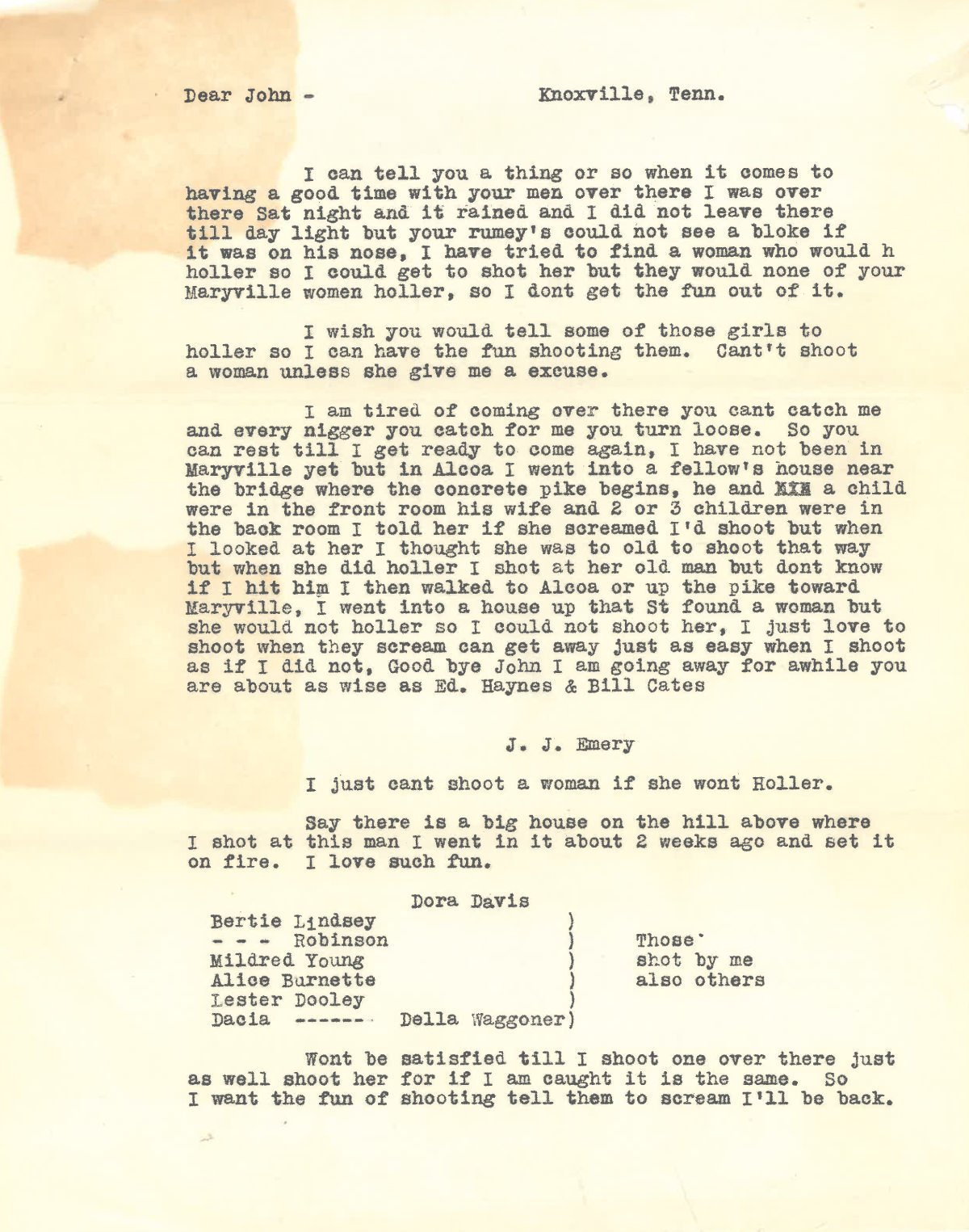 A mimeographed version of a letter located in materials of V.J. Hultquist, construction supervisor for the Aluminum Company of America and later Alcoa city manager, believed to be from the “Night Marauder” serial killer to the sheriff of Blount County. During a trial, handwriting experts for the prosecution and defense disagreed over whether the writing matched the suspect’s in documents from his job at ALCOA. This photo has redacted objectionable content.

The "Night Marauder" murders and assaults in Maryville, Alcoa and Knoxville a century ago were covered in newspapers in other states as well. 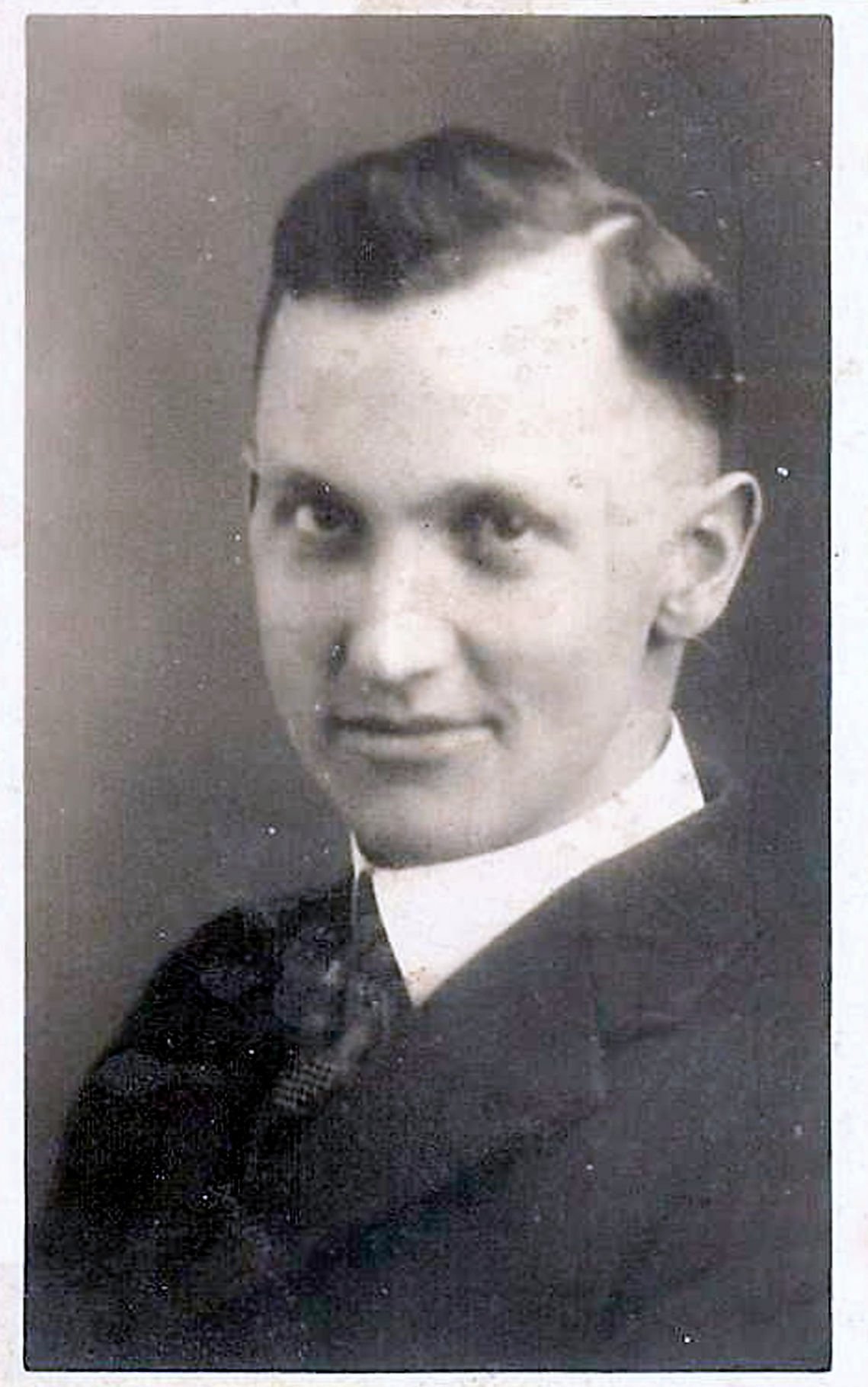 William Daniel Sheffey was a suspect in a series of murders in the area from 1919-26 and went to trial three times on one murder charge but was not convicted. 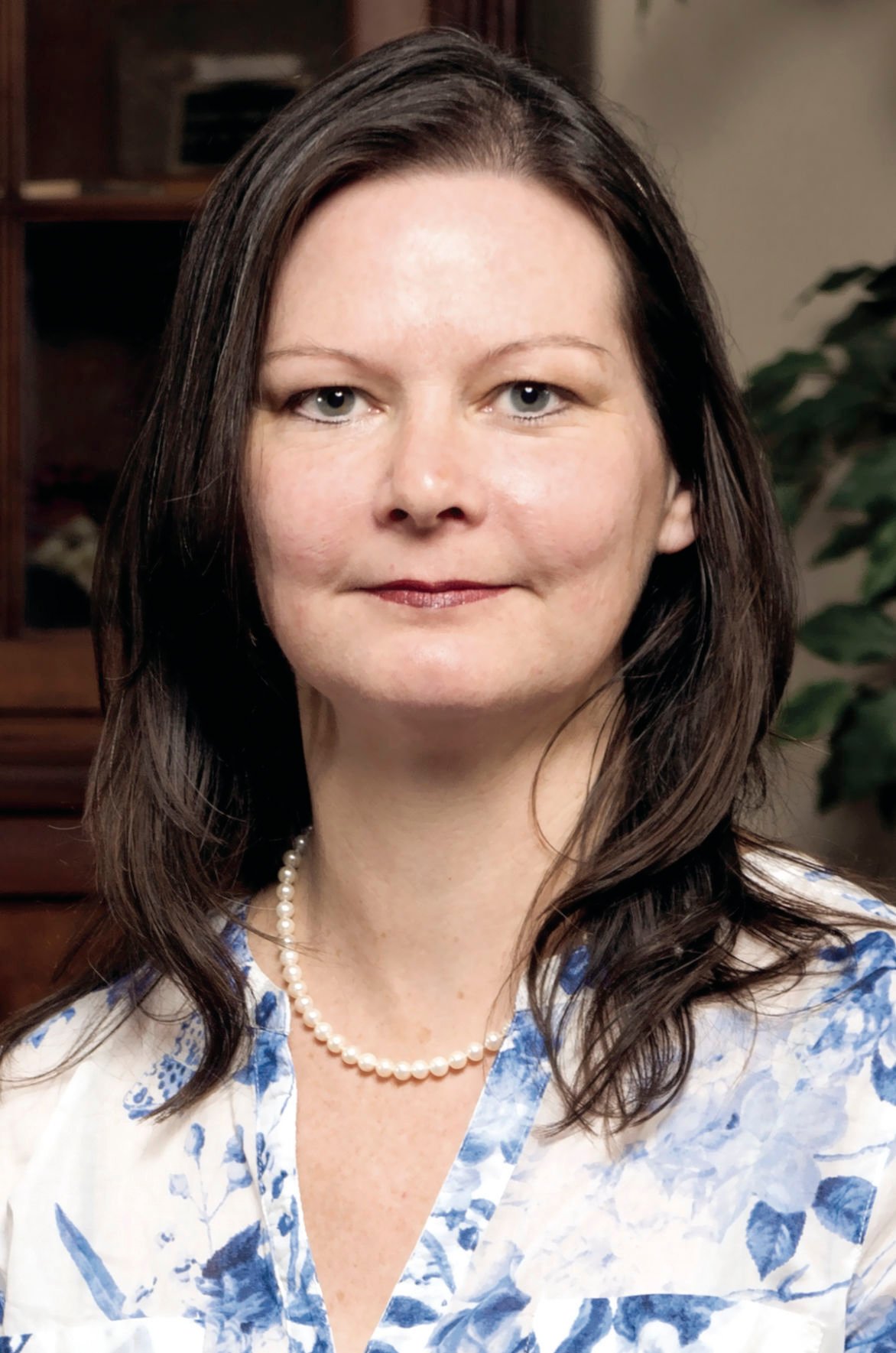 The Maryville Times in 1926 covered the case of the “Night Marauder,” who was suspected of murders and assaults in Maryville, Alcoa and Knoxville over several years about a century ago.

A mimeographed version of a letter located in materials of V.J. Hultquist, construction supervisor for the Aluminum Company of America and later Alcoa city manager, believed to be from the “Night Marauder” serial killer to the sheriff of Blount County. During a trial, handwriting experts for the prosecution and defense disagreed over whether the writing matched the suspect’s in documents from his job at ALCOA. This photo has redacted objectionable content.

The "Night Marauder" murders and assaults in Maryville, Alcoa and Knoxville a century ago were covered in newspapers in other states as well.

Between 1919 and 1926, a serial killer roamed Maryville, Alcoa and Knoxville and terrified residents.

The man was called the “Night Marauder” because he typically struck at night, leaving murder and assault in his wake. The story was carried by area newspapers and those from as far away as Atlanta, Philadelphia, Indiana and Wisconsin with headlines such as “Maryville and Alcoa folk tremble while murderer goes unapprehended.” The killer even sent a letter to Blount County Sheriff John McCampbell, taunting him with, “You are never going to catch me.”

The sheriff thought it was from William Sheffey.

Sheffey, a suspect with ties to Maryville College and the Aluminum Company of America (ALCOA), was arrested and charged on five counts: two for the murders of Luther Wells and Clyde Poe; two for assaults on Ada Wells and Flora Poe; and one for breaking into a third home. However, after three trials on one charge, the murder of Luther Wells, with no conviction, all charges were dismissed.

This long-forgotten case may have been forever lost in the fog of time had Maryville College history professor Nancy Locklin-Sofer not stumbled across a short reference to it while preparing a new class, the “History of Murder.”

In the class, students explore facets of murder, including vigilante justice, the erasure of victims, hate crimes, political assassination, serial killers and manslaughter, as well as tracing the emergence of the criminal justice system along with trial law strategies.

During research for her recently published book “Murder, Justice and Harmony in an Eighteenth-Century French Village,” Locklin-Sofer came across a court dossier about a 1718 murder trial in France and discovered a whole body of literature on true crime. When her students expressed an interest in a class on the history of murder, she readily agreed.

“That was the inspiration for the class,” she said, adding, “I am very lucky to be at a place like Maryville College. I have the freedom where, if I know students want to learn about something, I can usually do it.”

She learned of Maryville’s serial killer after seeing a snippet of a 1926 story on The Daily Times archives page headlined, “Night Marauder kills woman age 60.” Two women — a mother and her recently divorced daughter — were attacked and the mother shot. Since The Maryville Times and Maryville Enterprise from that time are not digitized and online, Locklin-Sofer went to the Blount County Public Library to look up the story on microfilm.

She calls it a stroke of luck that she had to find the information in this way, because she had to scroll through the whole roll of microfilm.

The professor also spoke with Knoxville attorney Wayne Kramer, a graduate of MC whose grandfather, Russell Kramer, defended Sheffey. Unfortunately, none of the elder Kramer’s documents have been located, and neither have any of the Blount County court records on the case.

By another stroke of luck, Walker asked Alcoa city historian and Blount County Circuit Court Judge David Duggan if he could shed any light on Sheffey’s case. Duggan did have information — a 4-inch-thick stack of papers given to him several years ago by the granddaughter of V.J. Hultquist, construction supervisor for ALCOA and, later, Alcoa city manager.

Duggan had glanced through the papers several times and saw they had to do with a series of murders supposedly linked to one person, but he didn’t study them in detail. The name “Sheffey” stood out; a beloved Alcoa teacher and principal was Josephine Sheffey Irwin. Duggan later discovered she was the sister of the accused murderer.

The materials included old newspapers, correspondence, transcripts of witness interviews, reports of a private investigator and a summary of the murders. “So, I knew the kinds of things I had, but I still didn’t realize the significance of it,” Duggan said. That is, not until he spoke with Locklin-Sofer, who copied the documents and is now using them in her class.

Duggan believes Hultquist became involved in the investigations because of Sheffey’s connection with ALCOA, both the company and the city.

“At one time, Sheffey was employed by the company, and some of the criminal activity took place in Alcoa,” Duggan said, adding, “The summary lists more than 40 murders that somebody thought had similar characteristics. But that’s not to say Sheffey was necessarily a suspect in all of them.”

Locklin-Sofer said the typical “Night Marauder” crime involved attacking homes that did not yet have electricity.

“He would get to know the household well enough that, according to a couple of survivors, he would manage to get into their room and remove all the matches from next to the lanterns before he would start doing anything so that there was no way they could turn the lights on,” she said. “Then, if it was the case of a young couple, especially, he would shoot the man, and while the man bled out on the floor, he would attack the wife, (sexually) assault her. In some cases, if the women fought back or tried to get away or screamed, he would shoot them, too.”

William Sheffey had been tried and acquitted in 1915 in Sevierville of the death of a young woman in a very similar case.

“In fact, a witness in the 1915 Sevierville case saw a man leaving the area who claimed his name was J.J. Emery, and that was the name signed on the letter to the sheriff,” Locklin-Sofer said. “So, something connected the Sevierville case to the Maryville, Alcoa and Knoxville cases, and to a lot of people, it seemed likely to be Will Sheffey. After 1915, when he was acquitted and World War I later started, he served in the military. After he comes back, his mother has moved to Maryville and lived right on College Hill, near the Maryville College campus.

“He had a lot of connections to the college,” Locklin-Sofer continued. “The Proffitts were character witnesses, psychology professor (Jasper) Barnes was for the defense team. One of Sheffey’s sisters was on staff, and one of Sheffey’s brothers got a math degree and then taught math for a while.”

Not everyone at the college was convinced of Sheffey’s innocence. The journal of Samuel Tyndale Wilson, the college’s president from 1901-30, states Sheffey was a “wicked creature.”

Leigh Ann Brewington, a Maryville College senior who majors in history with a minor in psychology, said she enjoys the combination of true crime and historical documentaries in the “History of Murder” class.

“I had no idea that we would be going over a real case that happened right in our community,” she said. “I’ve grown up in Maryville my whole life and had never heard of it. I enjoy looking at the old documents and learning the facts behind the case.”

She said the class has been compiling a timeline of the murders, along with a timeline of William Sheffey. “We’ve also been looking at other murder stories in the case to get some context for the murders that happened in Maryville.”

Myndalynn Word, a senior who majors in English literature and minors in writing communications, said, “One of our first assignments was to analyze a primary source from the Night Marauder case. I got to take a deeper look at the Emery letter. This letter was published in multiple newspapers in the area, and it came from the murderer himself. Of course, a lot of suspicion was that Sheffey wrote it, but that was never proven. Either way, this letter admitted to the murders and literally listed all of the murderer’s victims at the end of it. Some of the details are just creepy! He said that he could only kill a woman if she would scream for him. In fact, he stated that he didn’t like Maryville women as well because they wouldn’t scream for him.

“Nowadays, the murderers are idealized, and I think that sends the wrong message,” Word continued. “I understand that their stories are interesting, but they are literally the bad people. The innocent victims should be the real heroes of the story. I just think it is super nice that Dr. Locklin-Sofer has us focus on the victims.”

Locklin-Sofer said, “You don’t ever want to lose sight of the human tragedy, the people who are lost. I had wanted to make sure my students were focusing on the survivors, especially like Flora Poe. I want to know her story and all of these others.”

Locklin-Sofer said she would like to see a book result from the collaboration with her students and others who contribute information, since true crime is such a popular genre.

“Besides some of the academic pieces setting up the topics in my class, some of the legal cases and criminal justice sources, we’re also reading these kinds of books, things written by journalists and novelists that are historical true crime. I feel like this has the makings of a trade book in which the students and even community members would be listed among the contributors. The acknowledgements page alone will be a love letter to the local history community.”

Anyone with information to share on the case may email her at nancy.locklin@ maryvillecollege.edu.

What: A Maryville College class titled "History of Murder" is looking at the "Night Marauder" series of murders and assaults in Maryville, Alcoa and Knoxville from 1919-26. Professor Nancy Locklin-Sofer is looking for further information on the cases.