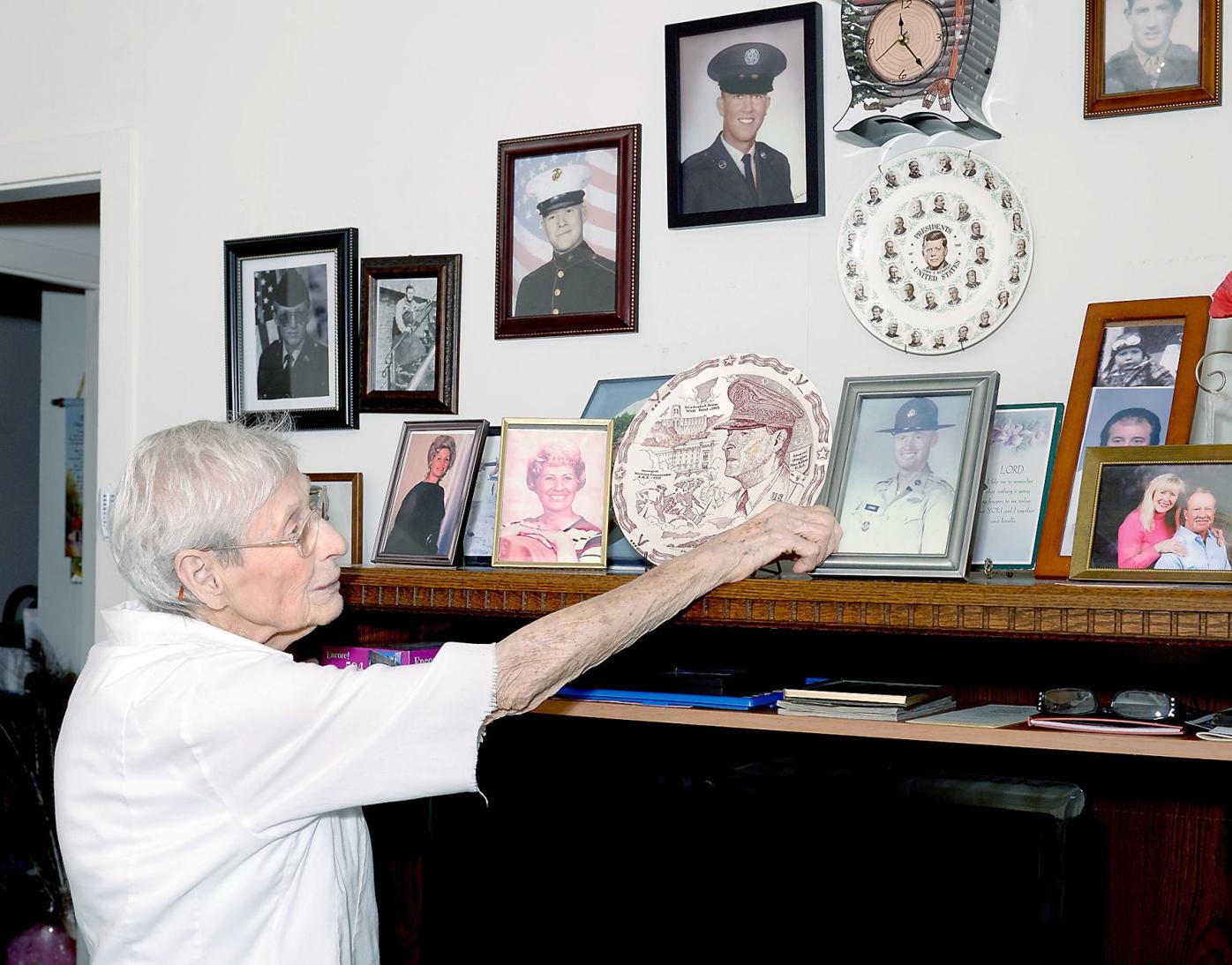 Jean Warren shares memories of her brother while talking about her family history in the area. Several of her family members served in multiple wars throughout the past century. 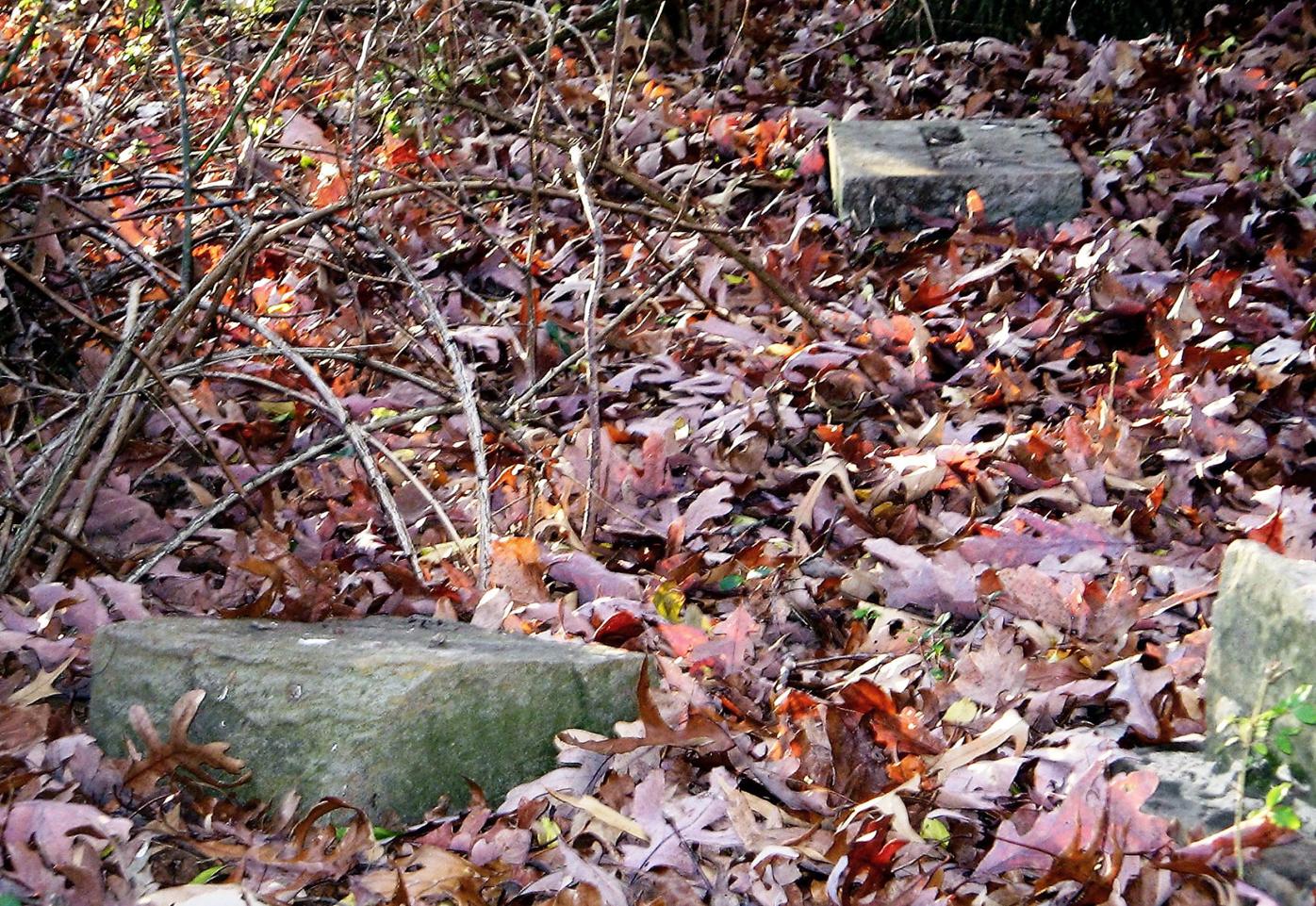 Headstones in the Hart-Wear cemetery as they appeared in 2006. 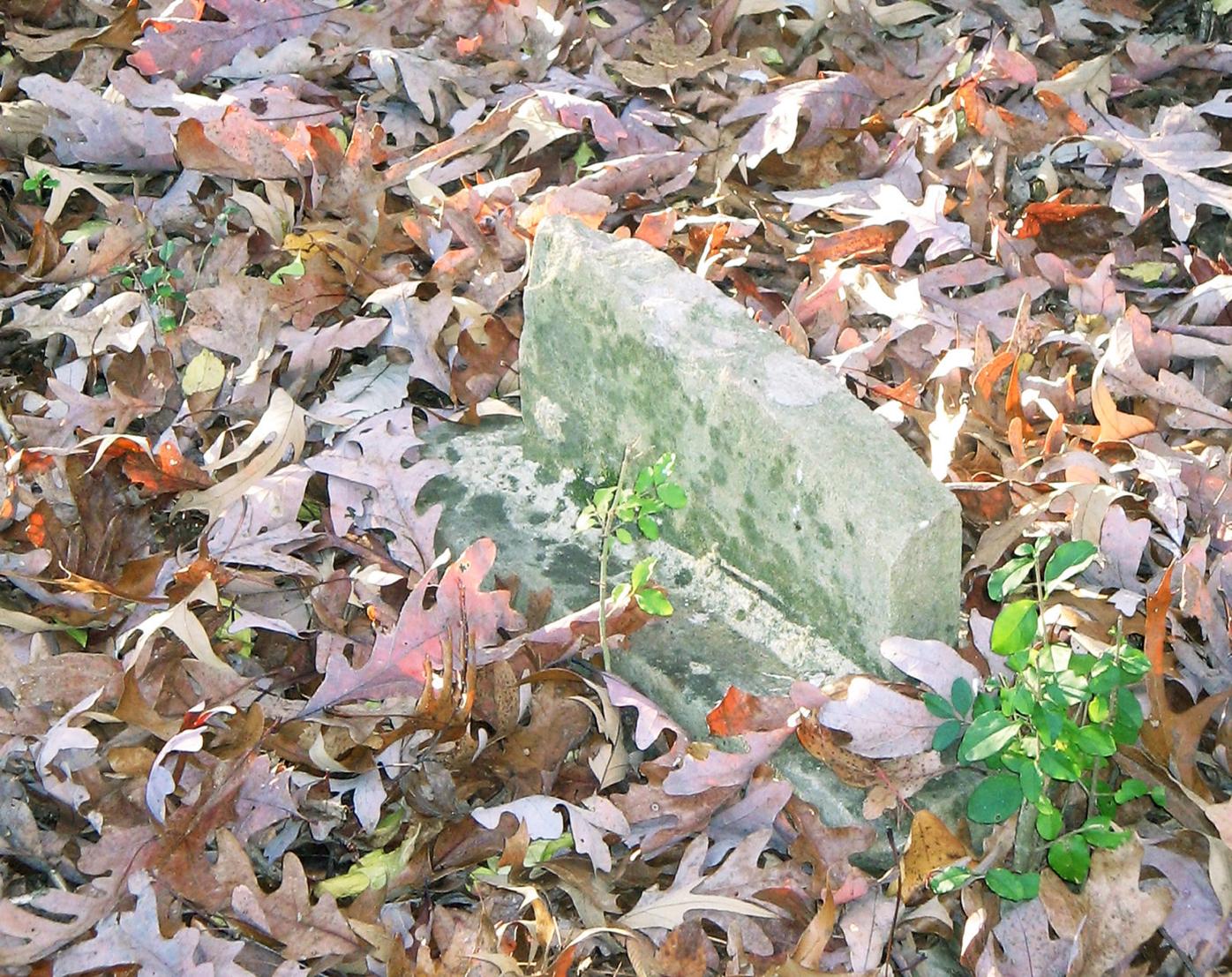 A headstone in the Hart-Wear cemetery as it appeared in 2006. 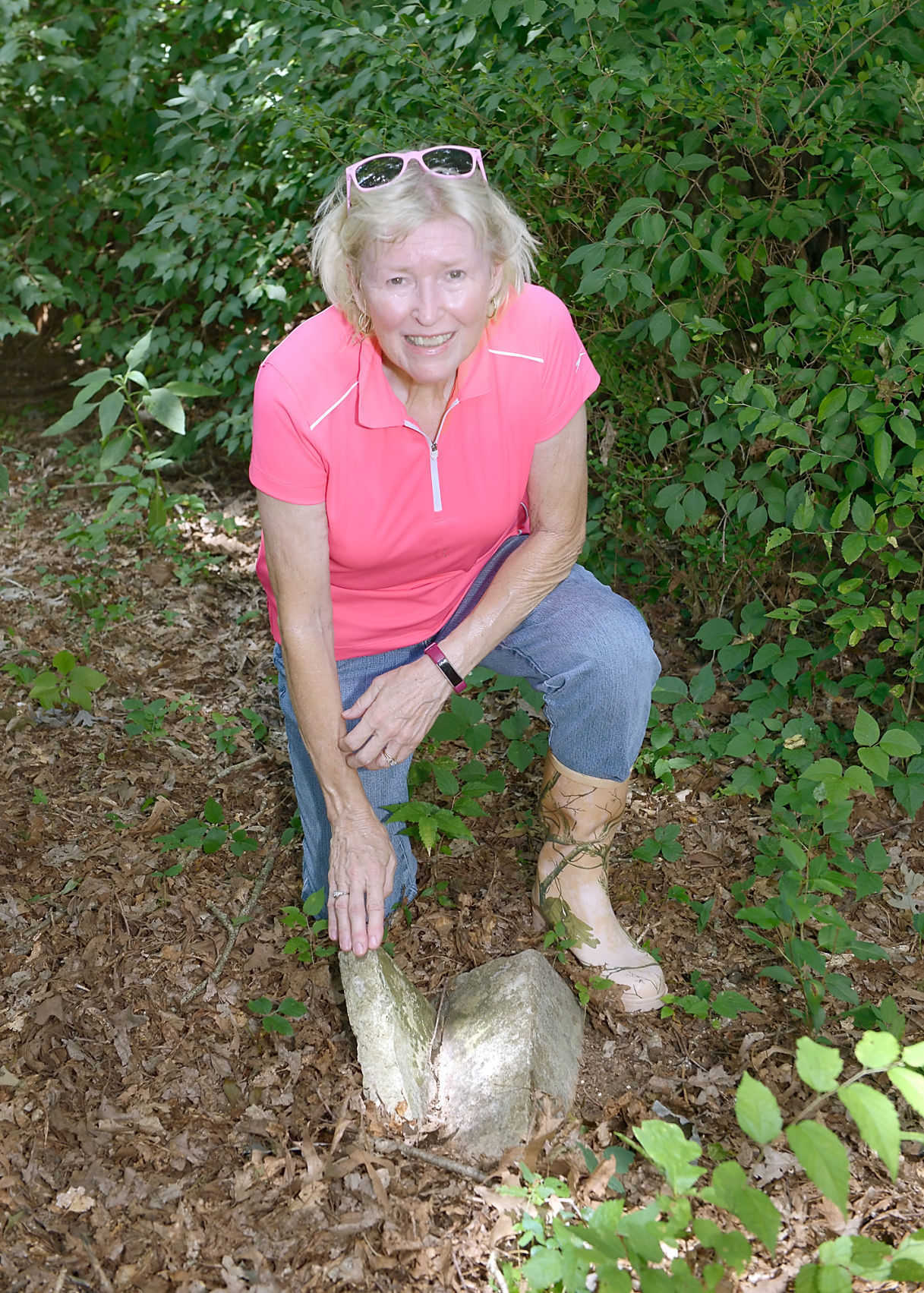 Carol Satterfield with one of several headstones found in the neglected Hart-Wear cemetery, just north of an Alcoa power station on Poplar Street. 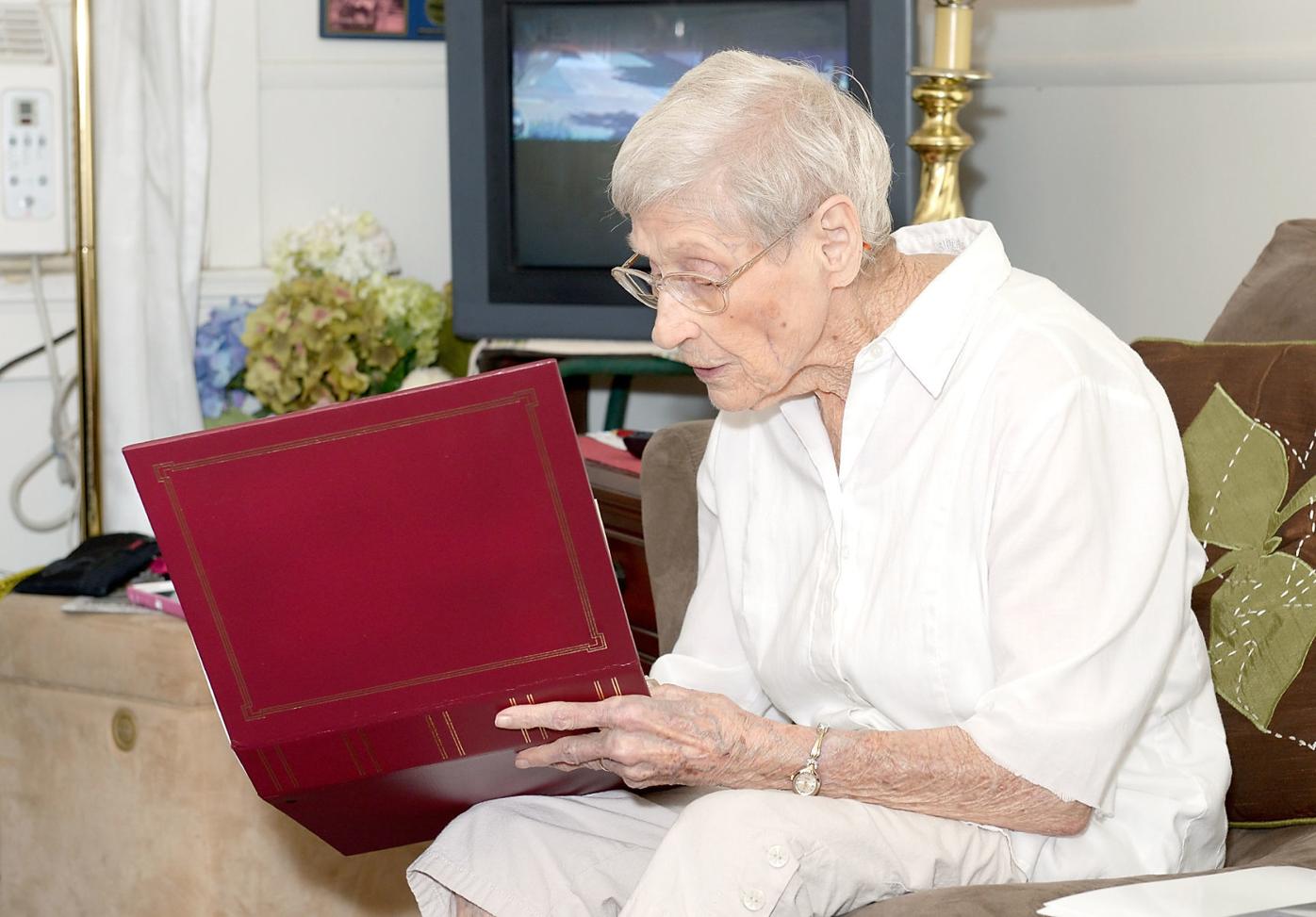 Jean Warren flips through a scrap book with clippings about the Hart-Wear cemetery near her home. She first found out about the cemetery in a 2004 article in The Daily Times. 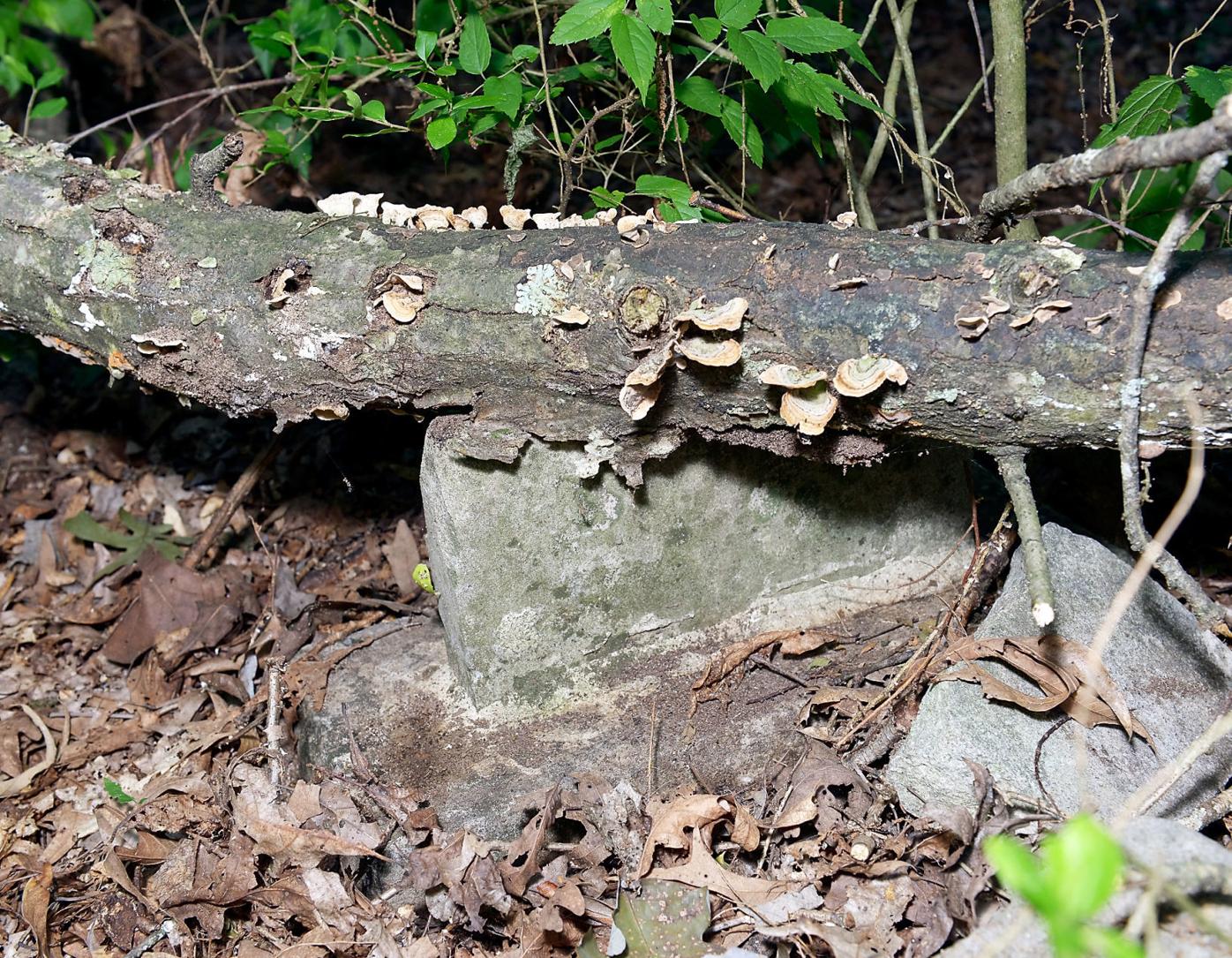 A broken headstone remnant is buried beneath a fallen tree. 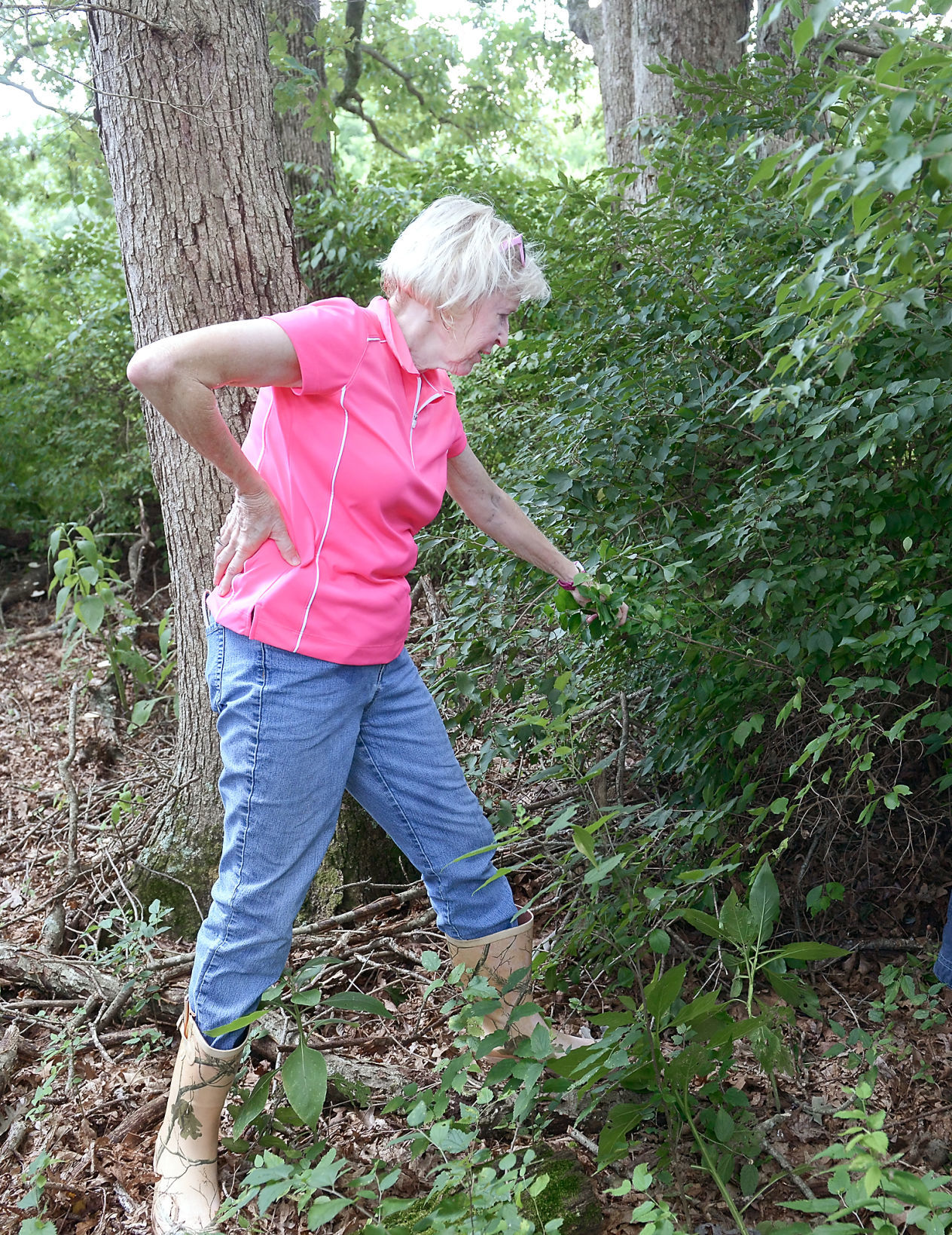 Carol Satterfield pulls some branches aside Tuesday to see headstones in the overgrown Wear-Hart cemetery. 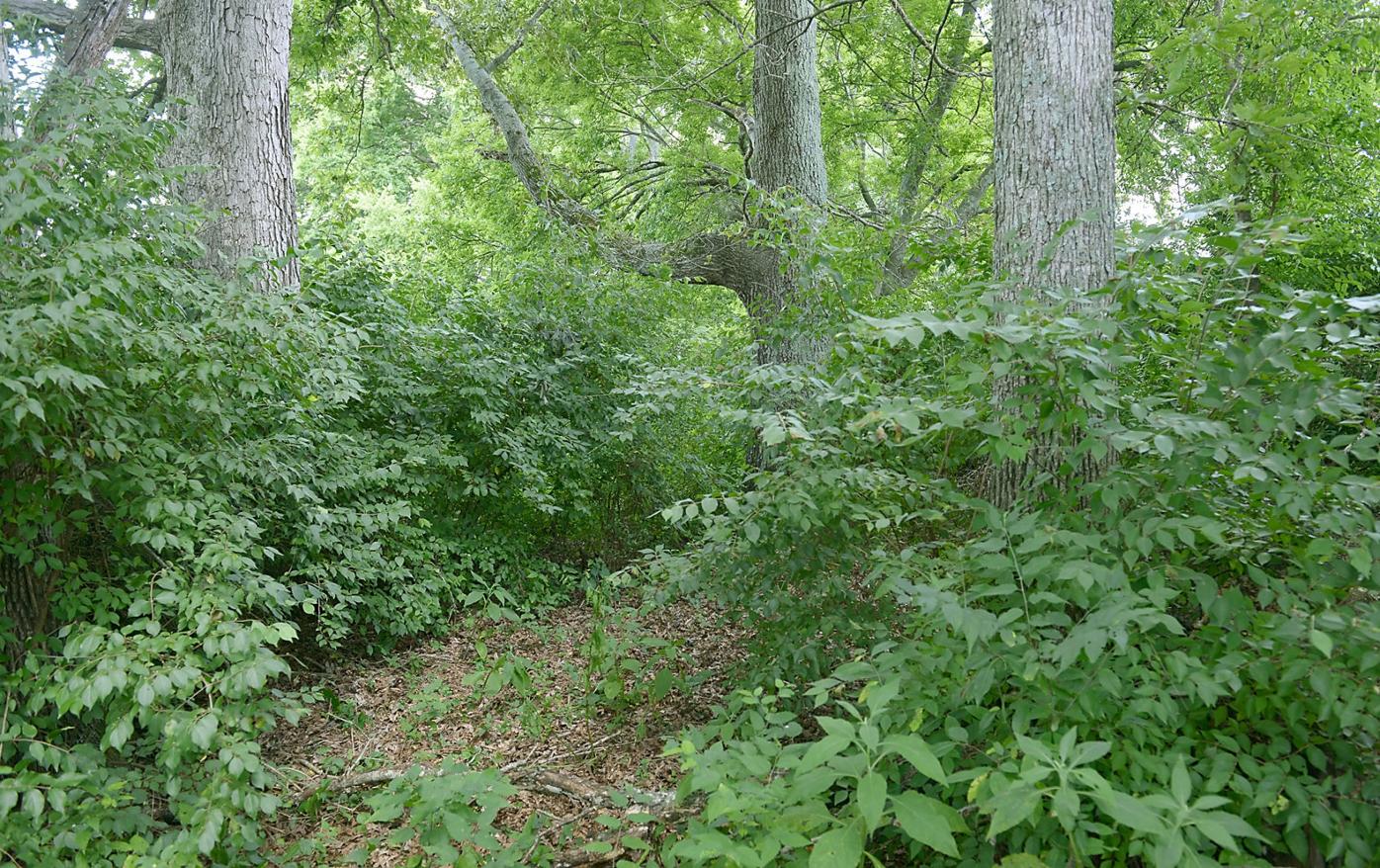 Several headstones lie beneath the undergrowth in this area, a small plot of land popularly known as the Wear-Heart cemetery. 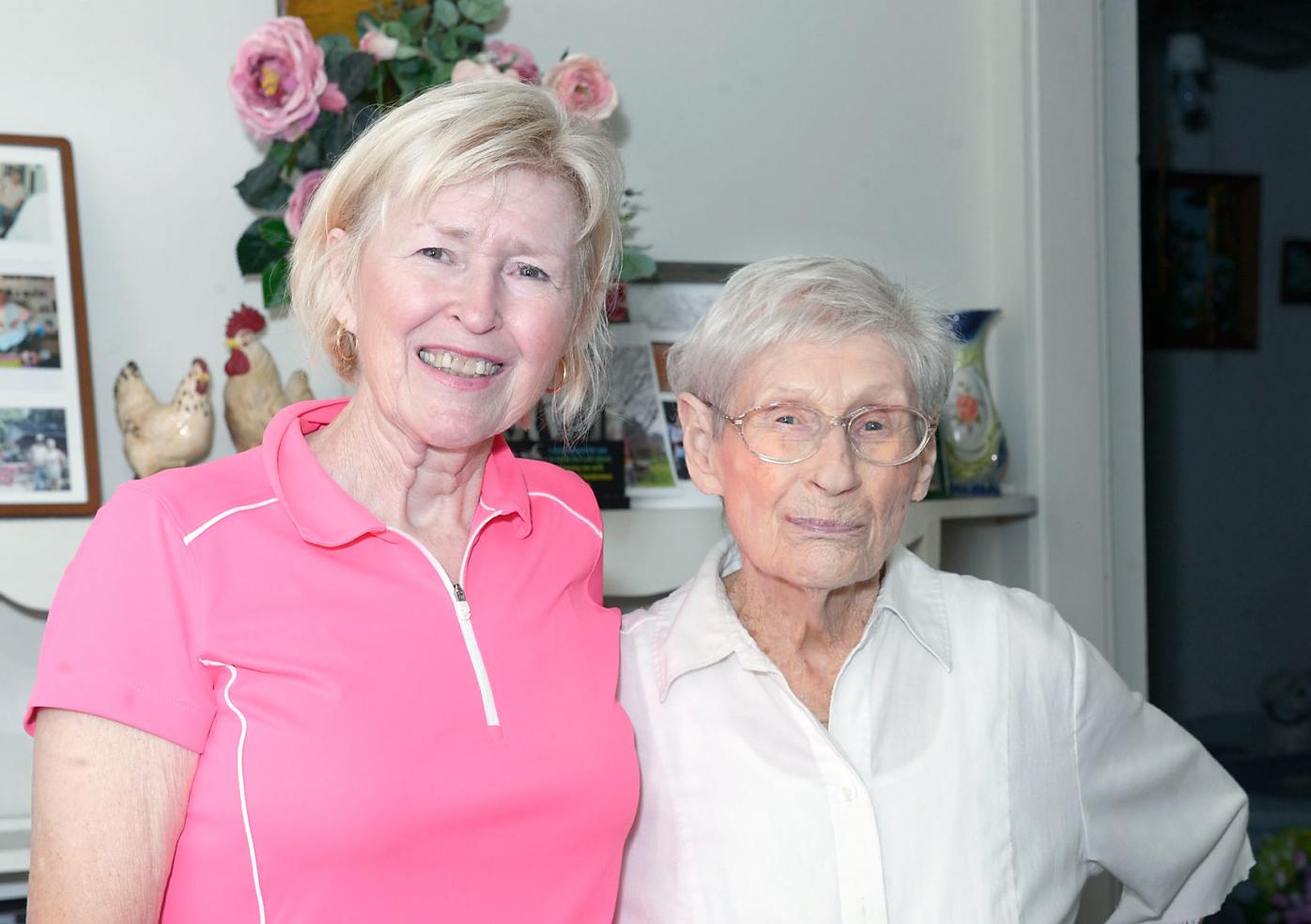 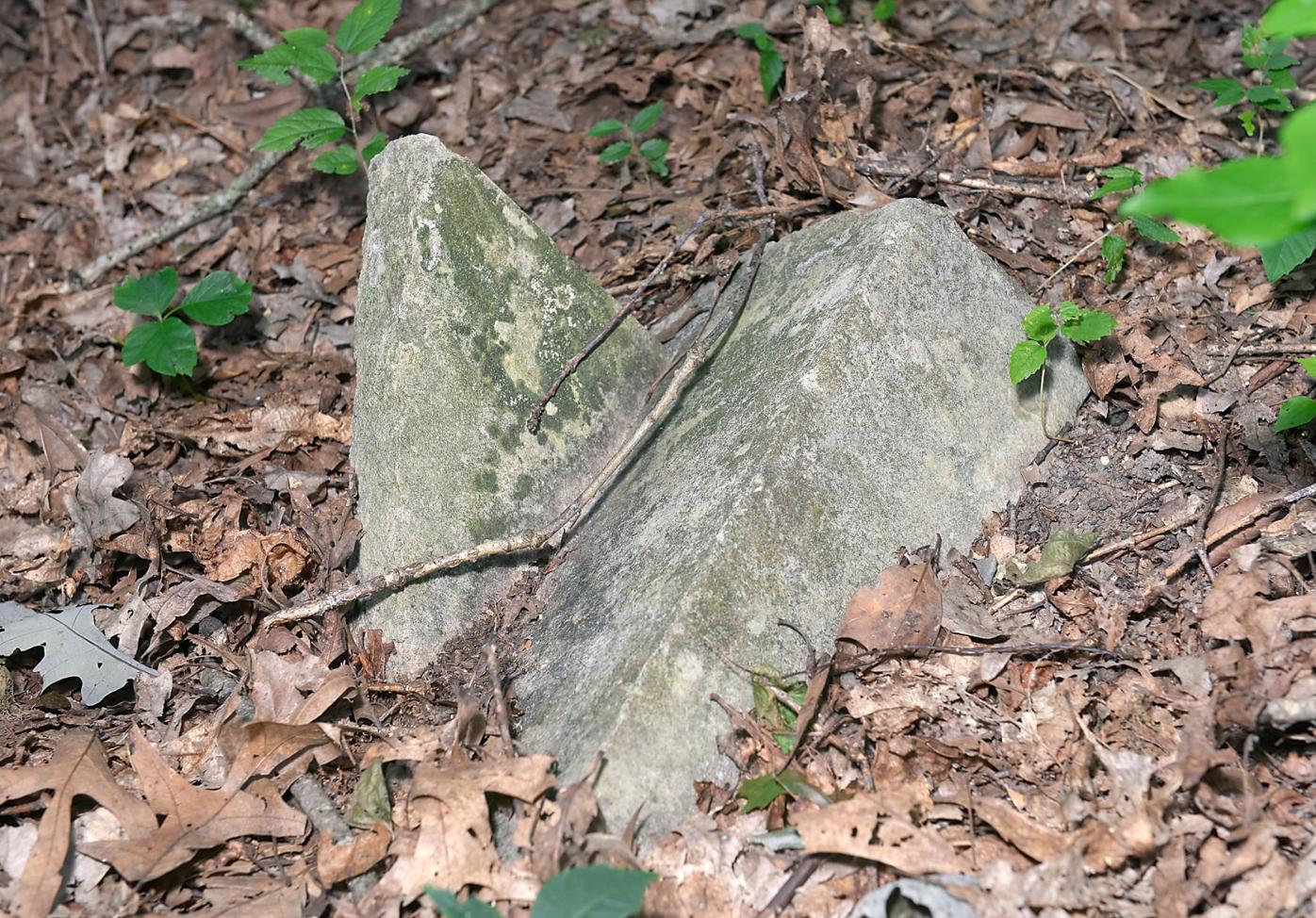 A headstone remnant lies neglected and nearly forgotten. This image was captured Tuesday.

Jean Warren shares memories of her brother while talking about her family history in the area. Several of her family members served in multiple wars throughout the past century.

Headstones in the Hart-Wear cemetery as they appeared in 2006.

A headstone in the Hart-Wear cemetery as it appeared in 2006.

Carol Satterfield with one of several headstones found in the neglected Hart-Wear cemetery, just north of an Alcoa power station on Poplar Street.

Jean Warren flips through a scrap book with clippings about the Hart-Wear cemetery near her home. She first found out about the cemetery in a 2004 article in The Daily Times.

A broken headstone remnant is buried beneath a fallen tree.

Carol Satterfield pulls some branches aside Tuesday to see headstones in the overgrown Wear-Hart cemetery.

Several headstones lie beneath the undergrowth in this area, a small plot of land popularly known as the Wear-Heart cemetery.

A headstone remnant lies neglected and nearly forgotten. This image was captured Tuesday.

Carol Satterfield was about to call off the search.

She was headed back to her car Tuesday morning when something came over her and she headed back up a hill in an open pasture off Poplar Street in Alcoa.

She had been hunting for a cemetery for the past hour and couldn’t find it.

The last time she saw it was November 2006 with her father, she remembers. More than 12 years is a long time in cemetery years and Satterfield was worried. Maybe the cemetery — with only its bases left when she last saw it — was gone.

The cemetery she was looking for is commonly known as the Wear-Hart cemetery and it’s been a hidden gem and a point of fascination to Satterfield ever since her mother, Jean Warren, found an article about it in The Daily Times back in 2004.

Warren, a spry nonagenarian and longtime Alcoa native whose father had worked on the railroads with the Works Progress Administration (WPA), loves history. Her family tree also is full of men in uniform — brothers, husbands, sons, all of whose images hang in reverence on her Cherry Street home’s living room wall.

So, when she found out there was a cemetery near her home containing the remains of a man who may have been a Revolutionary War soldier and the ancestors of the presidential Bush family, she found a calling in her later years.

“I wanted the people that are living, the Bushes, to know that their ancestors were here in my back yard,” Warren said.

Warren collected scraps and photographs and historical reminiscences about the cemetery, trying to bring wider attention to its existence. But over the years, it has faded, almost forgotten except to a handful of historians.

Until Carol Satterfiled had a hunch Tuesday and went back up that hill.

So small that it barely has any information on popular online cemetery records sites, the Wear-Hart cemetery is a Blount County treasure.

Thanks to local historians, its memory has not been lost and we know a little bit about its history and who is buried there.

Writer and researcher J.R. Young published nearly five pages on the cemetery in the fall 2018 edition of the Blount Journal, a local historical quarterly from the Blount County Genealogical & Historical Society that is rich with details about the area’s people, places and heritage.

Young writes that everyone buried in the plot is related. Anderson, Chandler, Duncan, Orr, Rankin, Weir and Young — all the families are of Scots-Irish descent and are related.

Edith Burns Little, who compiled cemetery records for the county, noted in 1979 writings that “all (Hart-Wear) markers were destroyed, the bases only remaining.”

Young quotes Little from collected Blount County cemetery records writing that the fence once surrounding the plot had been cut down and “cattle were ‘shading’ under the trees.”

In the journal, Young published an accompanying photo of ragged brush and cow manure shuffled among the old stones.

“TOO LITTLE TOO LATE” he later writes in all caps, mourning the loss of what records suggest is a significant set of graves.

Those records show that the Wear family — whose spelling is often used interchangeably with “Weir,” though the relationship between the two is not definitive, Young writes — are in fact thought to be ancestors of President George Herbert Walker Bush and, thereby, President George W. Bush.

“Hundreds if not thousands of people are related in some way to those buried in this cemetery,” he adds.

But the presidents’ ancestors are not the only point of interest about Wear-Hart.

At least one of the people laid to rest in the plot was born just as America was.

The plot itself may not be older than the country, but one man was born before the Second Continental Congress declared independence on July 4, 1776.

Records show his name was George Duncan Sr., Young writes in his entry on the plot. Little also says in her records that Duncan was listed as a Revolutionary War soldier but it also says he was born in 1773.

Regardless, the cemetery is old, perhaps one of the oldest in the county. Young says there may be 20 to 30 stones in the area.

But pictures snapped within the past two decades show only a smattering of small pedestals.

“I have met with various individuals in an effort to get conditions improved at the cemetery,” Young writes. “Unfortunately, little has been accomplished.”

The presidential connection was what truly sparked Warren’s interest. When she saw a president of the United States may very well have relatives buried only a fraction of a mile from her home, she couldn’t keep quiet about it.

“How ridiculous to have people buried in a cow pasture!” she said.

Warren, who turns 90 this month, may have made the cemetery’s life her mission, but she is not the only Blount County resident to lament its fate.

Blount County Historian Ken Cornett says there have been talks between local historians and ALCOA Inc. about fencing the tiny spot of wooded land off and protecting it from further destruction. But talks fell through, he said.

Today, Arconic owns the land. Cattle no longer graze there, and it is undisturbed except for heavy growth and a worn set of tire tracks. Electric lines tower over small clumps of trees.

“It’s just a shame that we’ve allowed it to deteriorate to the extent it has,” Cornett said. “I’m sure there are a lot of headstones there that are down and probably just under the dirt.”

Cornett proposed going into the area with probes to locate the stones and revitalize the little patch of history.

Jeff Wallace, owner of the Maryville Monument Company, said he would do just that in the blink of an eye and without charge. “It’s really easy to restore,” Wallace said. “A lot of those stones are old marble stones. You can bring them back to life, no pun intended.”

Wallace told Warren and The Daily Times in a phone interview if he got the chance to renew the site — even if that meant just remarking the graves — he wouldn’t hesitate. “We’d do it. We’re in. We’ll do whatever we need to do,” he said.

It would be a dream fulfilled for Warren, whose family has lived in the area for more than a century.

Arconic spokeswoman Christy Newman said the company was aware of the situation.

“When the small, unmarked cemetery was brought to the attention of current management, we took steps to stop unwanted encroachment and respect the memory of those buried there,” she said in a statement. “Since then we have engaged with historic preservation groups about how best to provide access to the site and support further preservation efforts.”

Newman also said she was not sure when the land shifted hands between ALCOA and Arconic.

But what if there was nothing left to preserve? Nothing for restoration enthusiasts like Wallace and Cornett to dig out of the ground?

On Tuesday, Satterfield donned gardening boots and trudged into the heat of the day and the thick brush to try and find the Hart-Wear plot. Satterfield’s husband and his friends told her he used to play in the woods and the cemetery when he was a child, back when a headstone jutted above the brush. She was afraid there wouldn’t even be bases to recognize the cemetery by.

As she scanned woods she hasn’t visited for more than a decade, Satterfield became worried the stones were no longer there, that the elements finally turned them into history, too, like the people buried beneath.

It was finally the hunch that took her back up the hill to another patch of trees, hoping against hope that she was looking in the wrong place and that the cemetery was still there.

Tucked away in the thick of heavy bushes, thorns and trees is a clearing. Five or six bases are clearly identifiable among the leaves. The cows hadn’t been there for years and the area seemed once again undisturbed.

Satterfield was elated, glad to have good news to report to her mother waiting at home. “My mom will be so happy,” she said as she surveyed the stones. “When she found out about this place she cut out the article and put it in a scrapbook. She thought it was important enough to do that. Who does that?”

Warren does. Sitting in her home, surrounded by images of her loved ones, she talked about her own legacy and her hopes that one day the cemetery would be more than just a little clearing.

“In my lifetime … I want someone to do something,” she said.