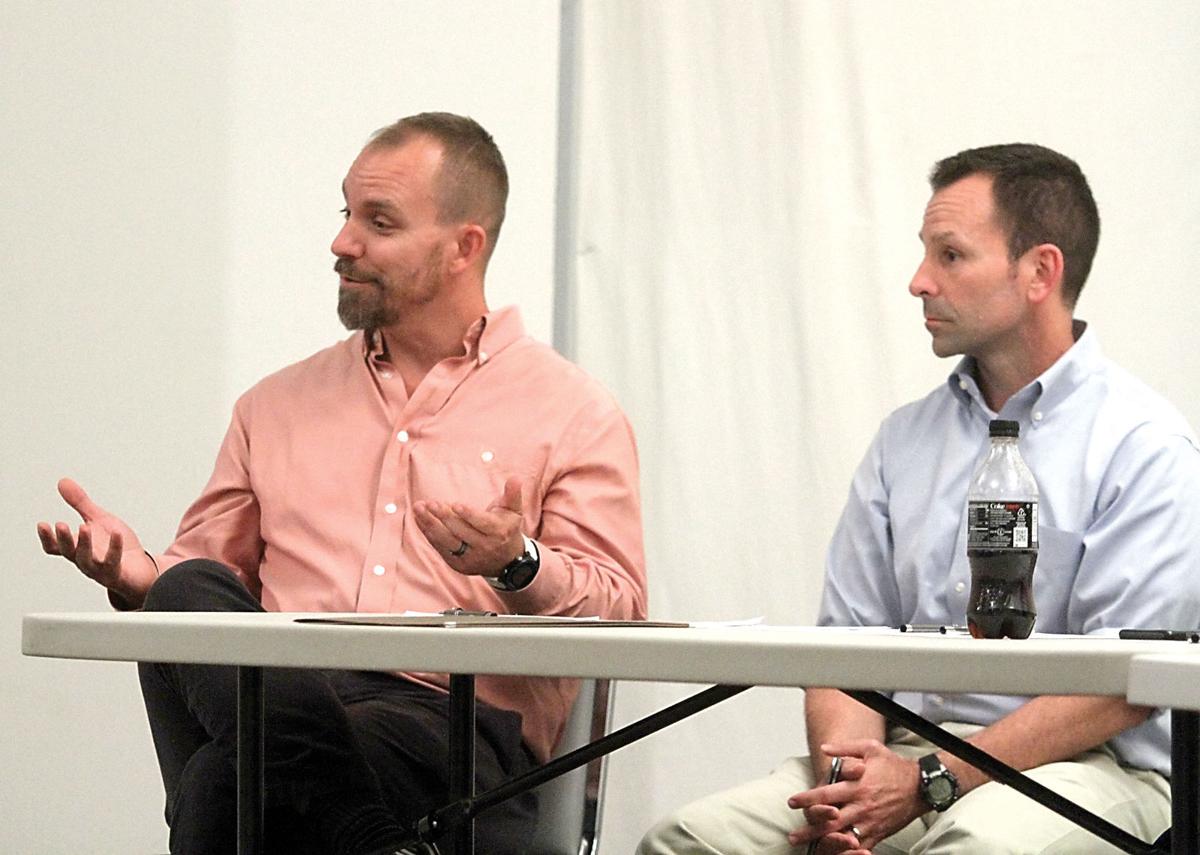 Michael Atchley (left) and John LeCroy, both with the Tennessee Department of Environment and Conservation, answer questions about the environmental impact of tubing on the Little River Monday in Townsend. 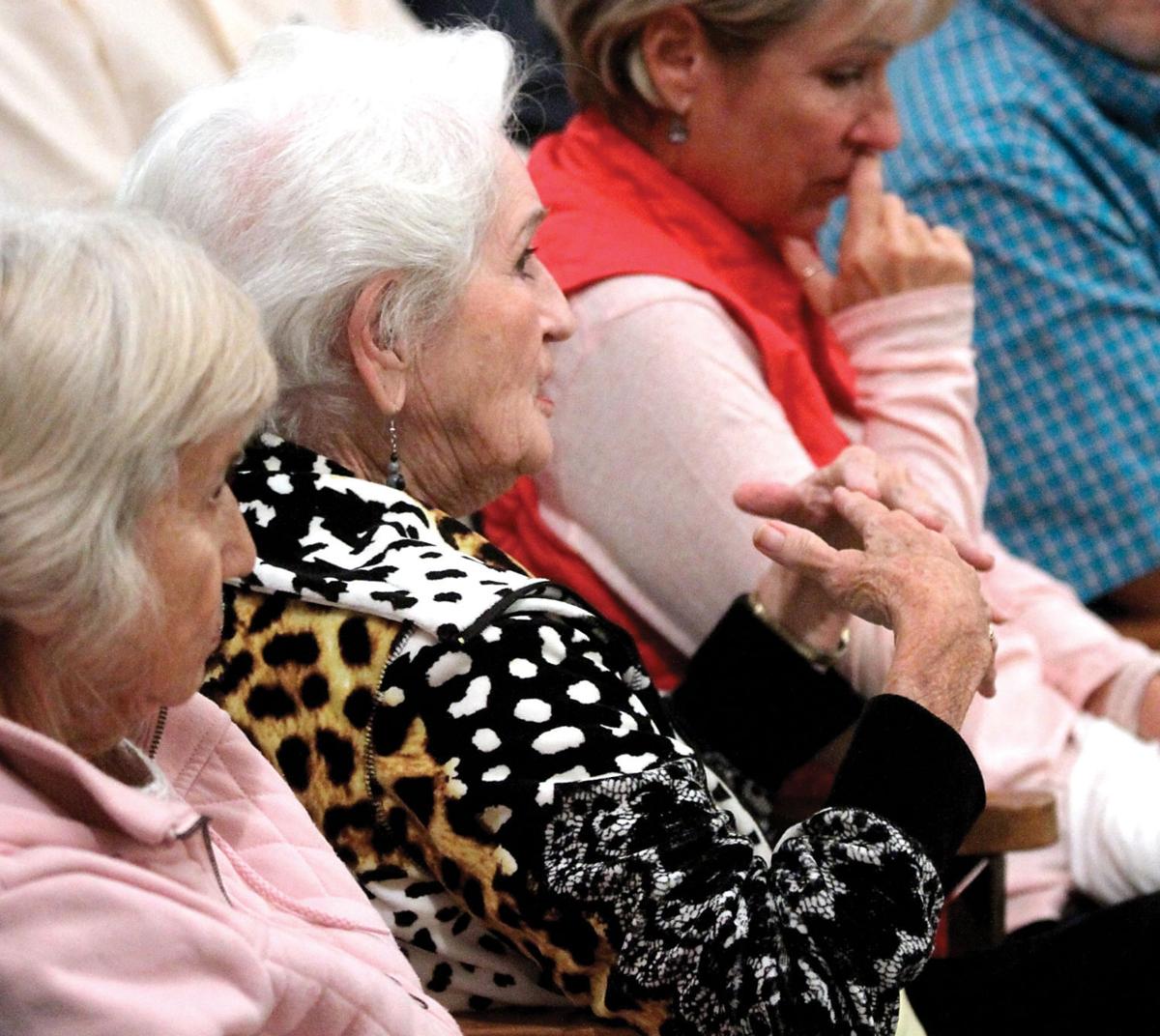 Mary K. Jones (center) asks how she should handle “30-40 tubers” on her family’s property, as her daughter Katty McFee (in red vest) listens at a Little River Recreational Usage workshop hosted by the City of Townsend on Monday. Jones’ family has owned property on both sides of the river since 1956, and her grandson was assaulted by three tubers in August. 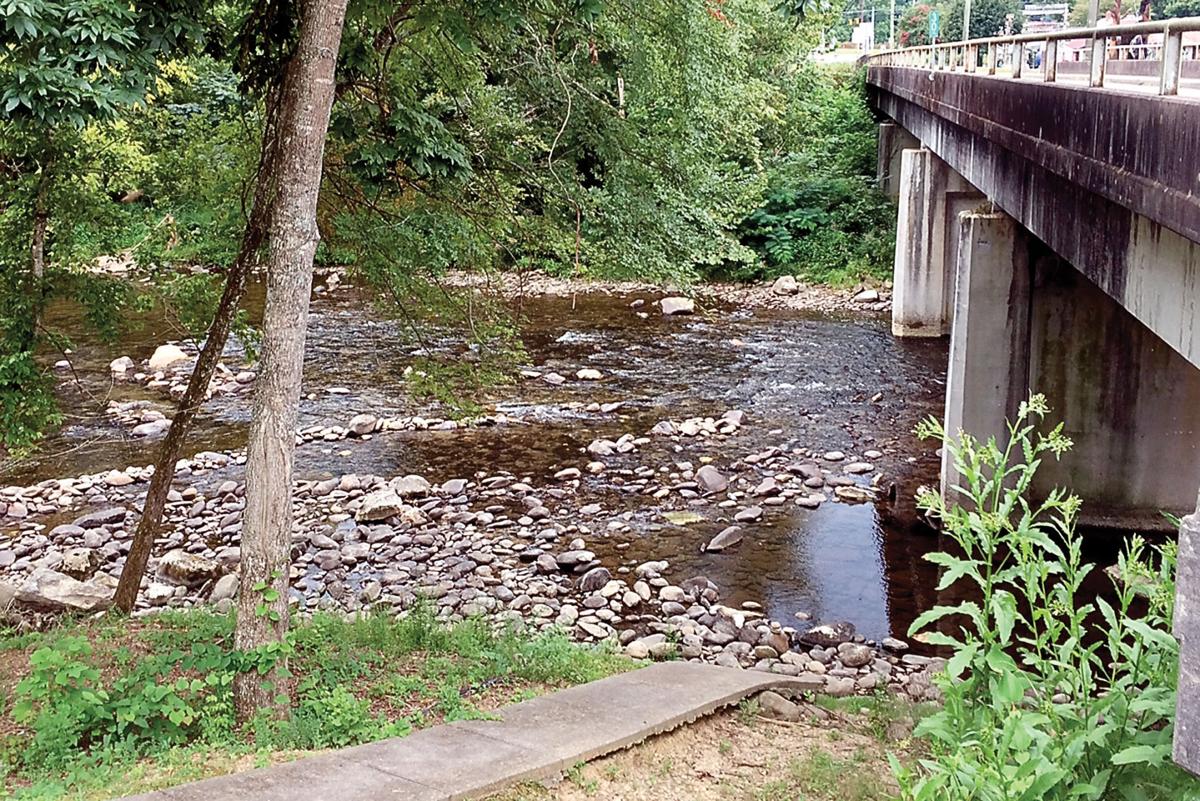 Citizens told representatives of the Tennessee Department of Environment and Conservation on Monday that people are moving rocks in Little River to funnel tubes where they want them to go. TDEC issued a letter in 2008 requesting that commercial tubing operators inform employees not to physically alter the river.

Michael Atchley (left) and John LeCroy, both with the Tennessee Department of Environment and Conservation, answer questions about the environmental impact of tubing on the Little River Monday in Townsend.

Mary K. Jones (center) asks how she should handle “30-40 tubers” on her family’s property, as her daughter Katty McFee (in red vest) listens at a Little River Recreational Usage workshop hosted by the City of Townsend on Monday. Jones’ family has owned property on both sides of the river since 1956, and her grandson was assaulted by three tubers in August.

Citizens told representatives of the Tennessee Department of Environment and Conservation on Monday that people are moving rocks in Little River to funnel tubes where they want them to go. TDEC issued a letter in 2008 requesting that commercial tubing operators inform employees not to physically alter the river.

EDITOR’S NOTE: This is the second story in a two-part series on the Little River Recreational Usage workshop held Monday in Townsend. The first story, which ran Wednesday, focused on questions about jurisdiction and safety concerns.

Michael Atchley, environmental program manager with the Tennessee Department of Environment and Conservation’s Division of Water Resources, said that baseline data “for years” shows that Little River is still at acceptable levels for recreational use standards for pathogens.

Those standards are checked during recreational usage, he explained to more than 50 citizens who attended a Little River Recreational Usage workshop hosted by the City of Townsend.

TDEC takes five samples in a 30-day period, Atchley said. Those samples are taken during low flow, he added.

“These water quality standards are assessed on a five-year watershed cycle, or more frequently if the data is trending towards improving or further degradation,” Schofinski told The Daily Times.

Citizens at Monday’s workshop worried about the health of Little River and described changes they have seen in the water.

“Thousands and thousands of people have no bathroom to go to,” said Charles King, referring to commercial tubing customers. “It seems to be getting slimier. I’m afraid to put my grandkids in it.”

Steve Hall questioned whether some of the slickness could be from the sunscreen and suntan lotions that tubers are wearing.

“This is the first year we have seen oil pooling on the side of the river,” he said. “I’m almost positive it wasn’t as slick (before).”

Pat Jenkins offered to show Atchley the difference in the amount of sediment in the morning versus after commercial tubing has started, rendering fishermen unable to see to the bottom.

“That seems to me that is a problem,” he said.

Pat Jenkins also questioned Atchley on Monday about who could enforce the moving of river rocks to create flumes to funnel tubes in certain directions. Pat Jenkins explained that TDEC sent a letter to commercial tubing operators in 2008, requesting they “desist from conducting any physical alterations in the river channel,” but that the moving of rocks continues.

“Enforcement is a tricky word there because you have to catch them in the act,” Atchley said. “Moving rocks changes the habitat, and we tore down some dams ourselves.”

Citizens scoffed at TDEC having to catch people in the act, but offered suggestions of where TDEC staff could stand to see folks moving river rocks. Pat Jenkins asked Atchley whether having video of those moving river rocks would be “enough.”

“Video helps us investigate, but it can’t be used as evidence,” Atchley said. “We have to use our own.”

Atchley added that, when it comes to any obstruction on the river, TDEC would seek out the owner of the property on which the obstruction was located to remedy the situation.

The news from TDEC may have come as a blow to those who own property along the river, but they are exploring multiple avenues to try to clamp down on the number of commercial tubing customers floating Little River each summer.

Tom Talley, father of Townsend Mayor Michael Talley, encouraged the city to look into what navigability has to do with private property rights.

“It’s like an easement,” Tom Talley said of the river. “The only thing the tuber has a right to do is float through; otherwise, the property owners have the right to protect their property.”

Citizens questioned Townsend Police Chief Kevin Condee about how they can address problems with tubers trespassing on their property.

“What do we do when we have 30-40 tubers on our beach?” asked Mary K. Jones, whose family has owned property on both sides of the river since 1956.

“I recommend you call dispatch,” Condee said. “I’d rather one of my officers run them off or ask them to leave.”

“It’s three to four times a day,” she noted.

Jones’ daughter, Katty McFee, suggested that commercial tubing companies send one person down with each group of tubers, to help enforce that tubers stay on their tubes and off private property.

“Nobody believes that (residents) own the property,” said Katty McFee, whose 25-year-old son was assaulted by three tubers on Aug. 19, after he told them to get off private property.

Those tubers, who live in North Carolina, were cited by Townsend police for criminal trespassing, but not assault, because Townsend police could not prove who started the altercation.

All three paid their fines, which were $123.75 each, according to Townsend City Recorder Danny Williamson.

Citizens asked Monday how many trespassing citations have been issued by Townsend police to tubers. When Williamson said six since June 2014 and three of those were the ones cited on Jones’ family’s property in August, the crowd erupted.

“It’s the property rights, in my opinion, that are really overlooked,” said Townsend Commissioner Kenny Myers. “(The Jones/McFee families) have got one of the nicest beaches on the river, and they can’t use it.”

The mayor, who lives along the river, agreed that there is a “sense of entitlement” among tubers, that the river is there for their entertainment.

“The river has many other uses besides tubing,” Michael Talley said. “Unfortunately, they can’t use the river because it is inundated by one use.”

Citizens agreed, with one man noting he had been told by one of the commercial tubing companies that fishermen using their property to access Little River would be trespassing.

“The state stocks the river, but there’s no access to it,” he said.

Michael Talley corroborated that most of the property along Little River is privately owned, but even property owners are not able to fish.

“You can’t fly fish,” said Mary K. Jenkins. “I’ve hooked tubers before, and I’ve been told I’m a horrible person for standing on my own property and fishing.”

Another woman in the audience wondered what would happen if all property owners lined up along the banks to fish Little River during tubing season.

“What would the tubing operators do?” she asked.

While the police chief said that he cannot tell citizens not to fish from their private property, Condee told citizens they could not keep tubes that “end up” on their property.

“That old saying that ‘possession is 9/10 of the law’ is not true,” he said. “If it’s obviously marked, it belongs to the tubing company.”

Pat Jenkins noted he does not let employees of commercial tubing companies come onto his property to retrieve abandoned tubes because they would be trespassing on his property to do so.

However, it was obvious by the crowd’s reaction Monday that citizens do not feel they are being paid common courtesy by commercial tubing operators or tubers.

As the previously civil tone of the workshop started to deteriorate, Michael Talley wrapped up the workshop by acknowledging the frustration of property owners, noting that everything from hurt feelings to assault are “all an end result” of feeling as if their rights have been encroached upon.

“I don’t know where we’re going to end up on this, whether we get it to the legislature for a private act (or not),” said Blount County Mayor Ed Mitchell, referencing one option for regulating commercial tubing on Little River. “But we’re going to start making meeting times to address this.”

Lesli Bales-Sherrod has written for multiple East Tennessee newspapers, as well as working in communications for the federal government in Washington, D.C., twice, in addition to her favorite job as mom of two. She covers Alcoa, Maryville and Townsend.