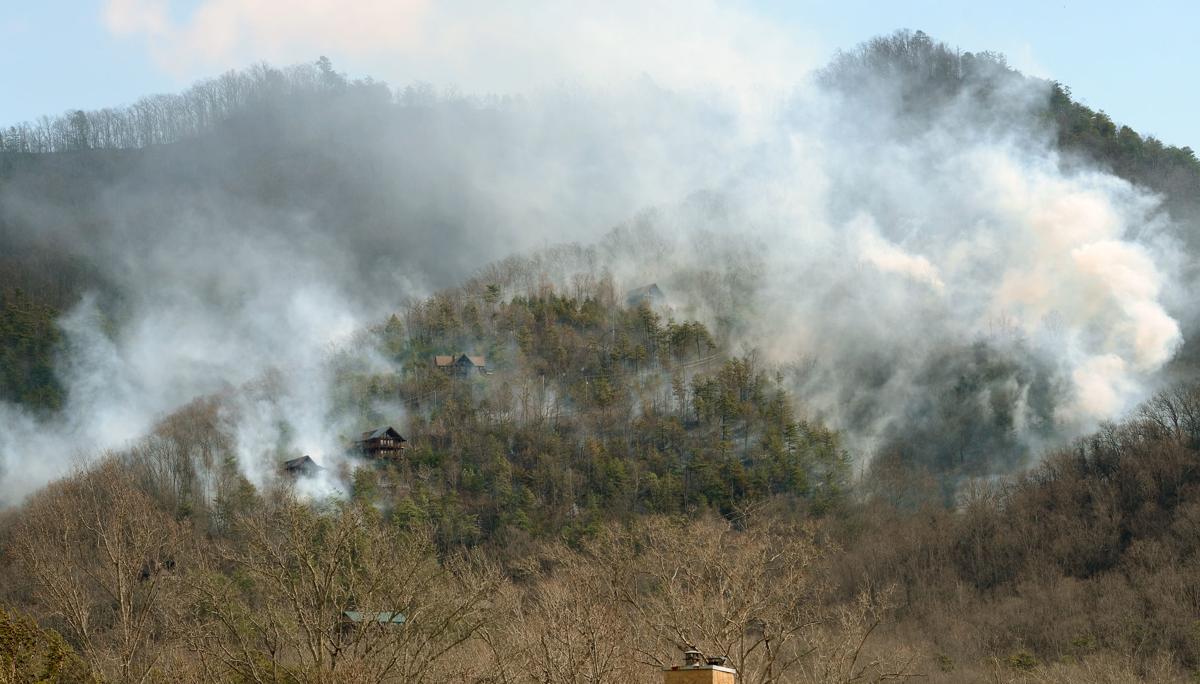 Smoke rises from mountainside fires on Saturday in Wears Valley. 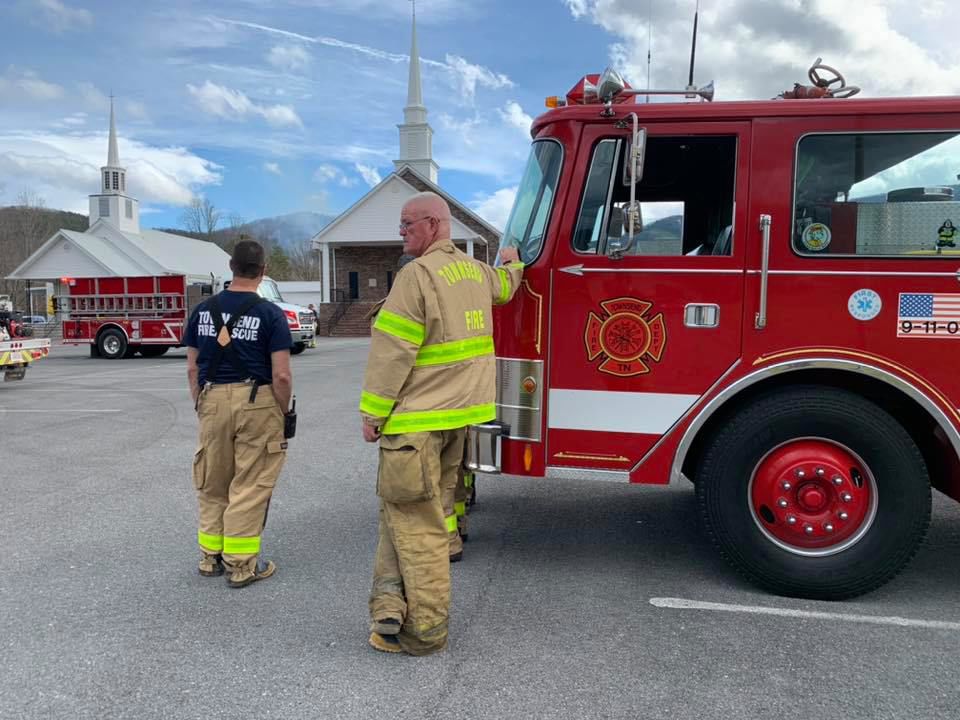 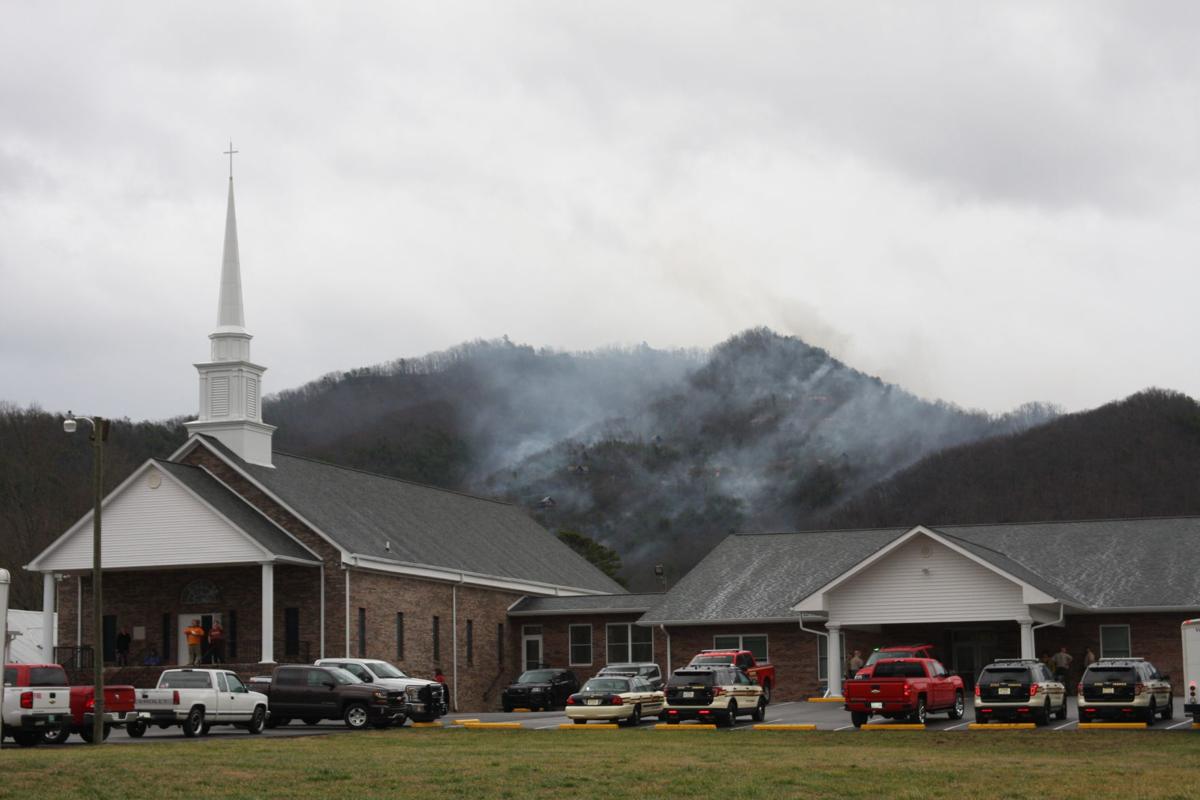 Fire and emergency personal stage at the base of the Raven’s Den fire Saturday afternoon at Valley View Baptist Church. The fire was 100% contained by Saturday evening. 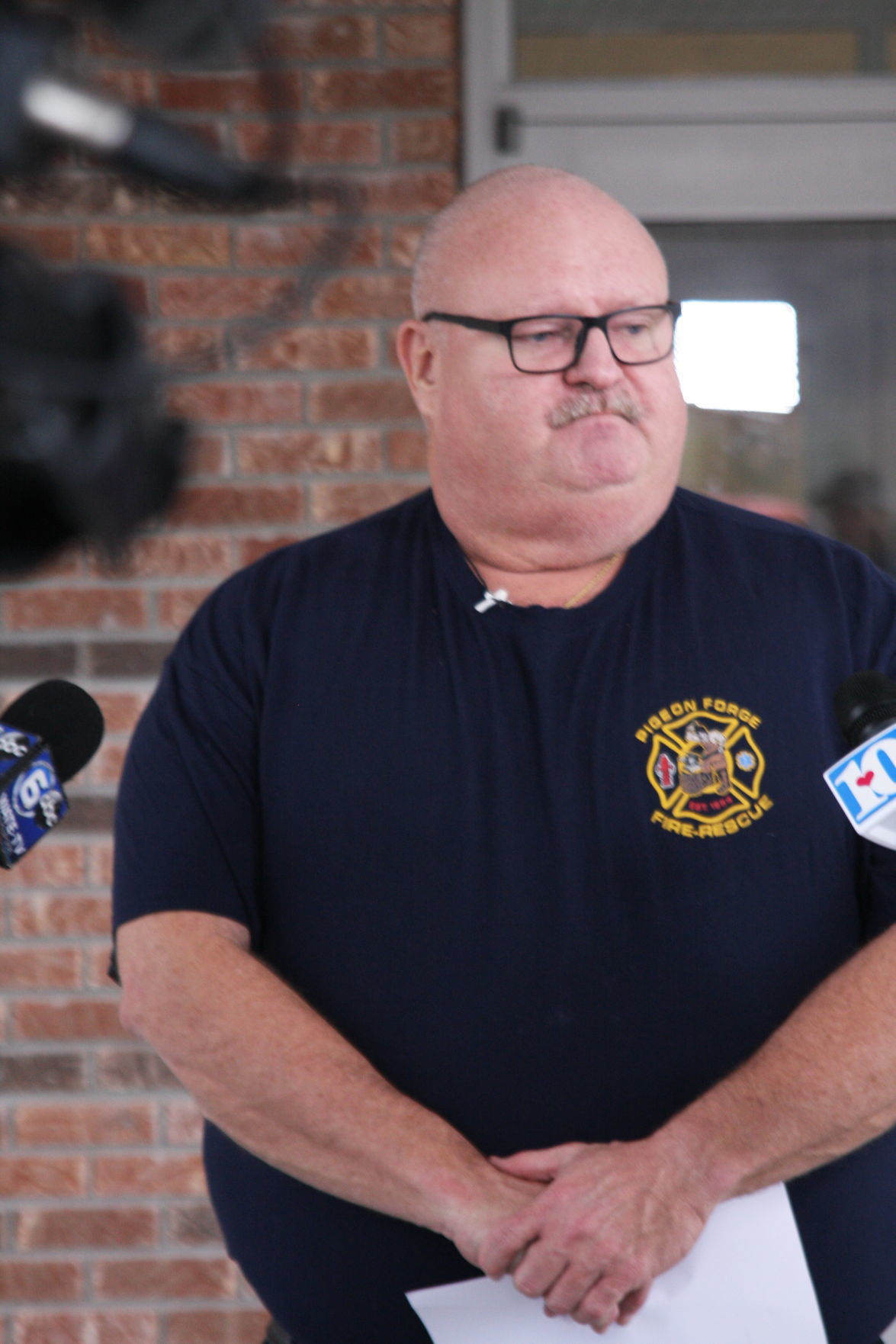 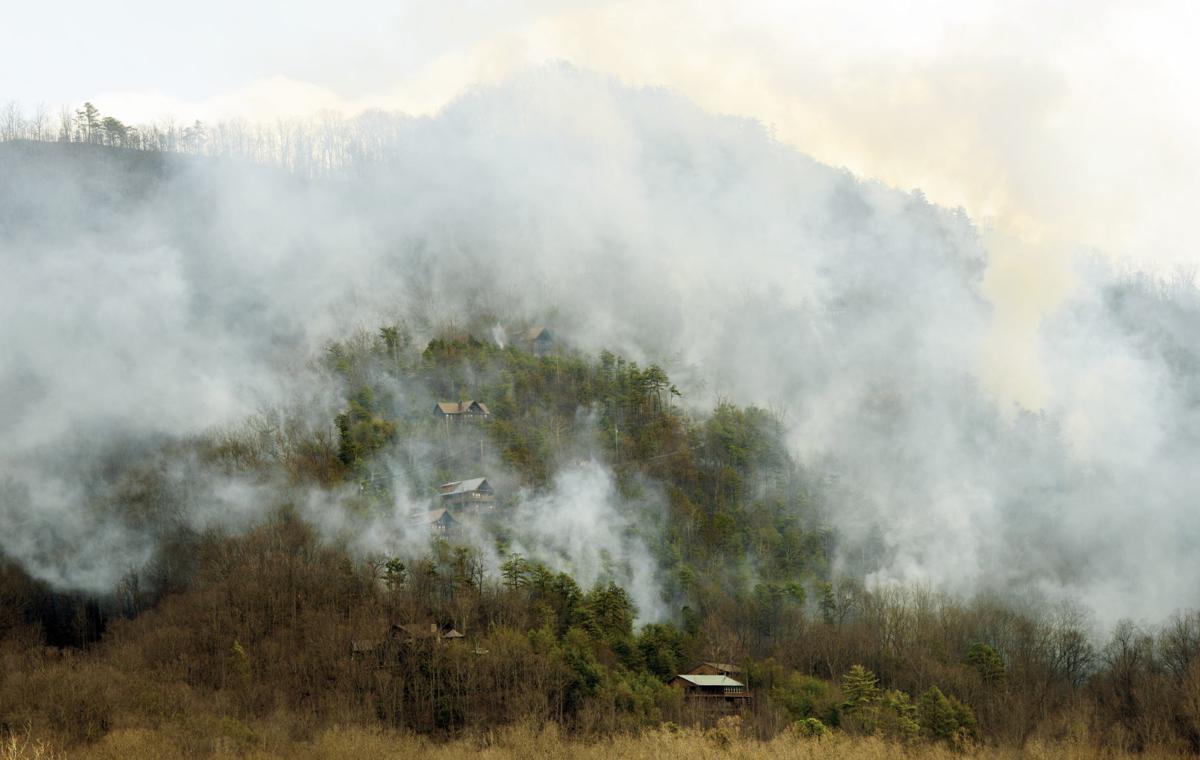 Mountianside homes and cabins are surrounded by smoke due to brish fires that broke out in Wears Valley Saturday. 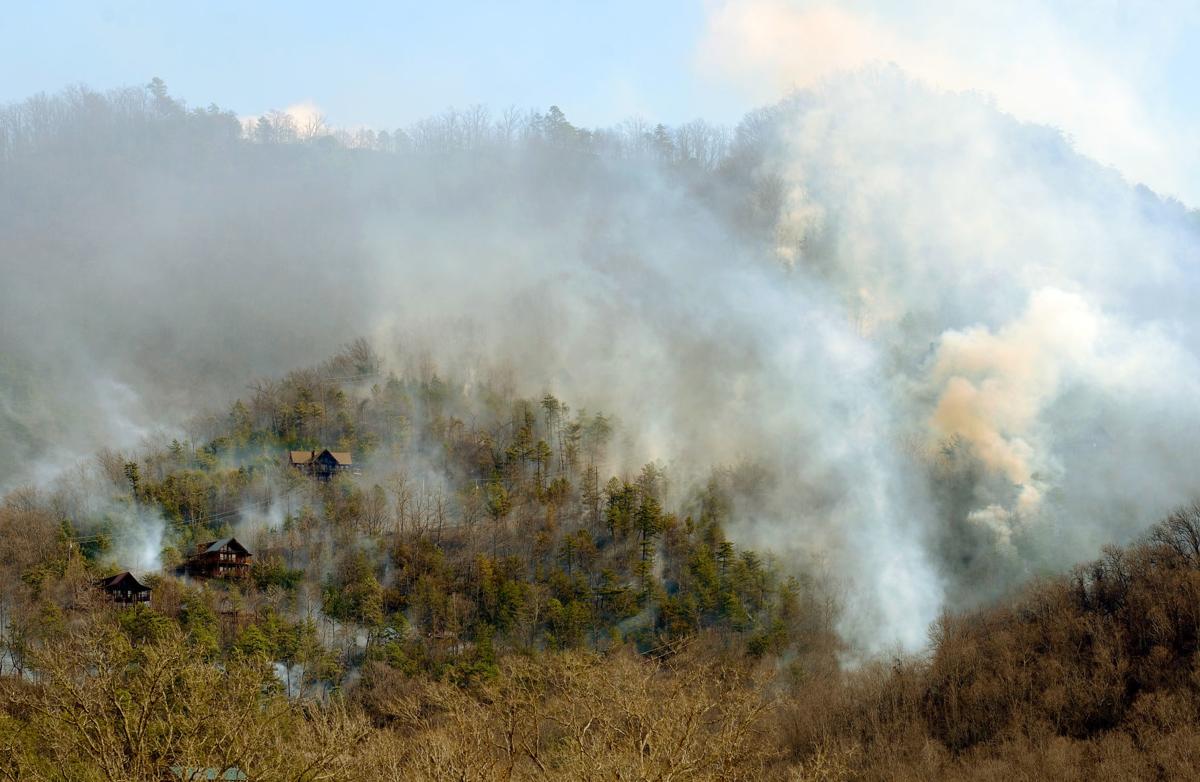 Smoke swirling in just winds on the mountain side in Wears Valley. 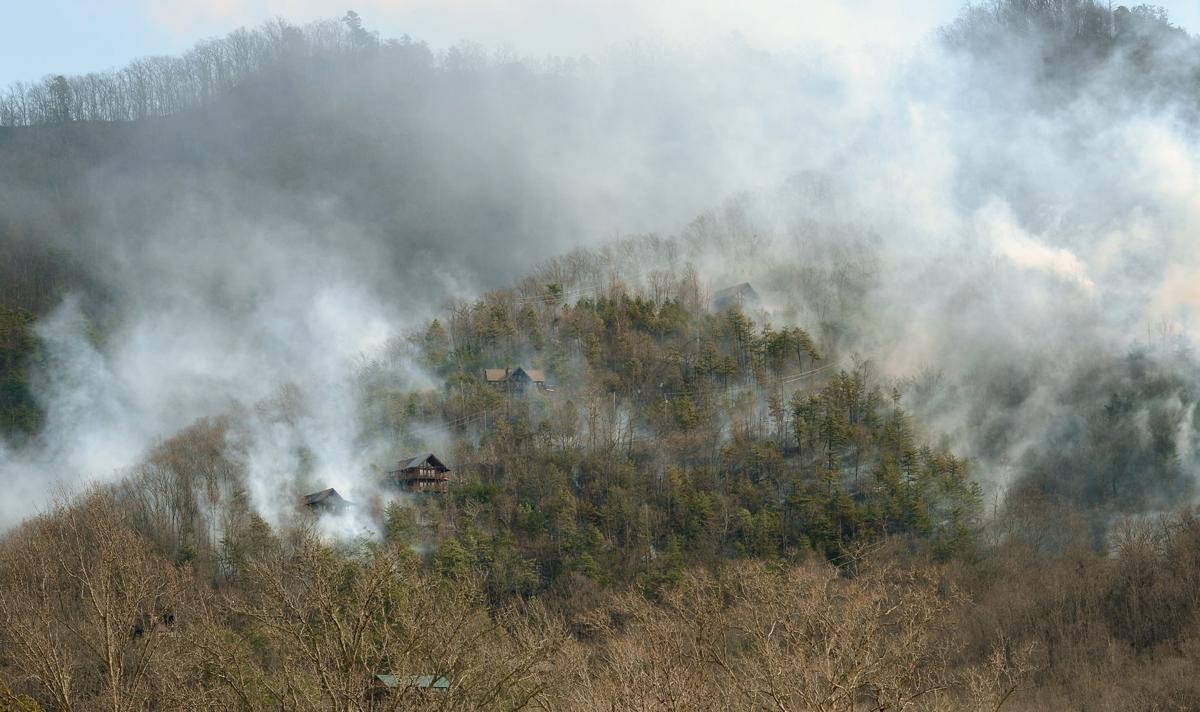 Smoke rises from mountainside fires on Saturday in Wears Valley.

Fire and emergency personal stage at the base of the Raven’s Den fire Saturday afternoon at Valley View Baptist Church. The fire was 100% contained by Saturday evening.

Mountianside homes and cabins are surrounded by smoke due to brish fires that broke out in Wears Valley Saturday.

Smoke swirling in just winds on the mountain side in Wears Valley.

In addition to the general haze typical for the Smoky Mountains, on Saturday a plume of smoke was billowing from the top of one peak.

A brush fire had broken out in the area of Raven’s Den Way and Starky Town Road in west Sevier County Saturday morning, and it had spread to 60 acres by Saturday afternoon, and approximately 20 cabins were threatened.

Pigeon Forge Fire Chief Tony L. Watson said in a press conference Saturday afternoon at Valley View Baptist church that the Raven’s Den fire was potentially caused by downed power lines, but he did not confirm the fire’s cause.

“Residents and visitors within the Wears Valley community may see signs of smoke and/or hot spots from the affected area until the fire is fully extinguished,” according to SCEMA’s statement.

Saturday started with high temperatures in the 70s, but an afternoon storm brought heavy rains making the job easier for the more than 15 emergency service agencies that responded to the blaze.

Blount, Alcoa and Townsend volunteer fire departments all sent units, and approximately 70 personnel responded to the scene. Emergency crews staged close to the base of the fire at Valley View Baptist Church in Sevierville.

Much of East Tennessee was under a severe thunderstorm warning and tornado watch Saturday evening.

“What we’re prepared for is ... spot fires that come up,” said Watson Saturday afternoon, acknowledging the wind could pose potential hazards. “Anything pushing 80 miles an hour is going to be a problem.”

He said there were also concerns about “troops in the area” and the danger posed by falling trees, adding the firefighters were the first priority.

“We don’t want to be dealing with a line-of-duty death,” Watson said.

Eric and McKenna Solowa, of Nashville, own a cabin on the mountain they use as a short-term rental. They watched from the grass at Valley View Baptist Church as smoke was surrounding their cabin Saturday afternoon.

“The guests staying up there called the fire department, then they called us, and we told them to get off the mountain,” McKenna Solowa said.

The Nashville couple were working on fixing up another cabin they own in nearby Pigeon Forge when they received the call.

They requested prayers on social media. When they arrived to the church, McKenna Soloway said she saw a halo covering the peak.

“We have people from Nashville to East Tennessee praying for this situation,” McKenna Soloway said. “We do believe God had his hand on this situation the whole time.”