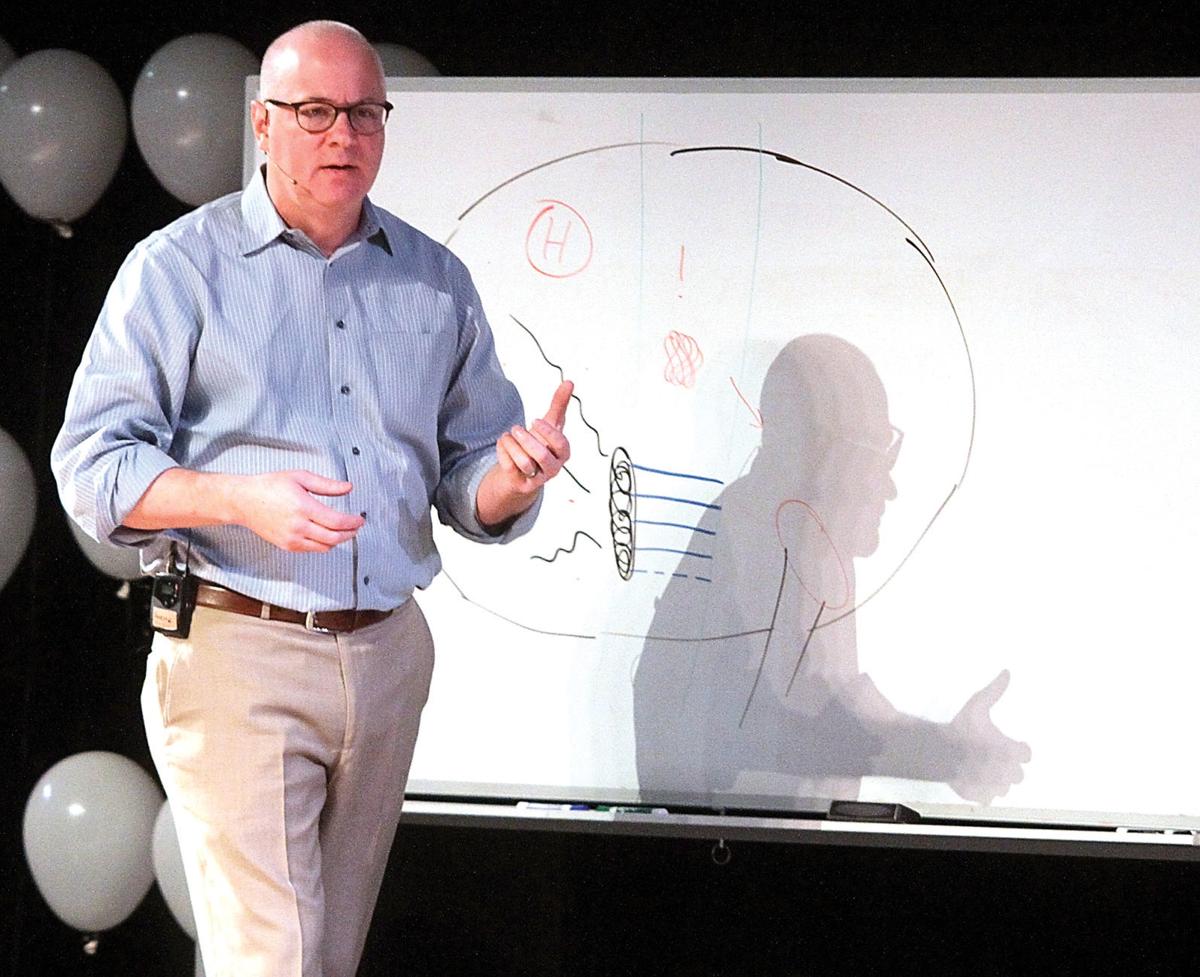 Tim Hilton, speaks at Celebrate Recovery Maryville’s seminar, “Hijacked: How Addiction Rewires the Brain and Poisons The Spirit,” Friday at First United Methodist Church of Maryville. Hilton, a recovery advocate who appears at events nationwide, has been in recovery for 14 years after 25 years of addiction. 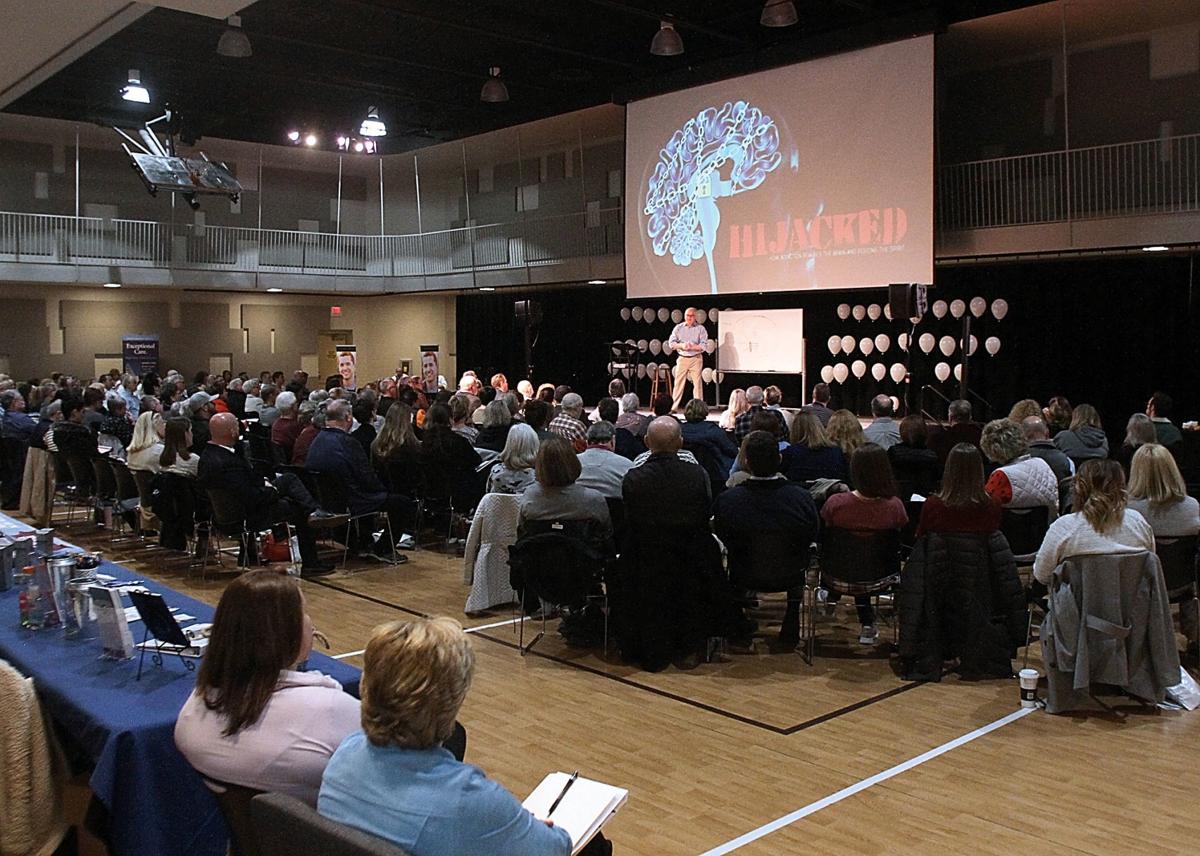 Celebrate Recovery Maryville holds a seminar on “Hijacked: How Addiction Rewires the Brain and Poisons the Spirit” on Friday at First United Methodist Church of Maryville.

Tim Hilton, speaks at Celebrate Recovery Maryville’s seminar, “Hijacked: How Addiction Rewires the Brain and Poisons The Spirit,” Friday at First United Methodist Church of Maryville. Hilton, a recovery advocate who appears at events nationwide, has been in recovery for 14 years after 25 years of addiction.

Celebrate Recovery Maryville holds a seminar on “Hijacked: How Addiction Rewires the Brain and Poisons the Spirit” on Friday at First United Methodist Church of Maryville.

Attendees to “Hijacked,” a free seminar on addiction and how it rewires the brain, filled the gymnasium of First United Methodist Church on Friday in Maryville.

The presentation by Celebrate Recovery Maryville was the first of its kind in Blount County, and by following suit from similar seminars held in Knox County — and indeed drawing some of the same speakers — it showed the extent to which local families are eager to learn about the disease afflicting their sons, daughters, mothers and fathers, officials said.

It’s important they do, said Jan McCoy, the event’s primary organizer, especially if they want to stage effective recovery.

“People need to understand why addicts do what they do, especially when it’s your child,” she said.

McCoy’s son, Dane, died in 2014 from a drug overdose. In February of last year, she helped open Dane’s House, a Christian-based men’s recovery house in Maryville.

Almost 200 people packed the hall for “Hijacked: How Addiction Rewires the Brain and Poisons the Spirit,” twice what organizers expected. There was no room to put up tables for the lunch provided.

In addition to families of addicts, the attendance also included school officials, county commissioners and individuals in short-term recovery from addiction themselves.

The event began in the morning and ran through the afternoon.

Among the speakers were doctors, law enforcement officers, therapists and recovering addicts.

Tim Hilton, an advocate who speaks nationwide about recovery, weaved neuroscience and psychology with deeply personal and often frightening anecdotes from his own 25-year struggle with addiction.

“This has nothing to do with how much they love you, or with moral fiber. It’s a disease. An actual disease,” he said.

He explained that the abuse of opioids can generate dopamine in users up to 1,000 percent of their baseline level — which causes the brain to learn to restrict dopamine. This in turn causes a worsening of judgment, as the brain’s frontal lobe responsible for decision-making is dependent on dopamine.

Phil LaFoy, the co-owner of Blount Discount Pharmacy, explained some of the complicated recent laws that restrict how pharmacies can fill painkiller prescriptions.

Other speakers addressed the heart of the opioid crisis.

Roughly 72,000 Americans died in 2017 from drug overdoses, according to the Centers for Disease Control and Prevention.

Dr. James Choo, from Pain Consultants of East Tennessee, described it as one offshoot of a broader crisis in the economy and social fabric. He pointed to the fact that deaths from alcoholism and suicide, so called “deaths of despair,” are also at their highest mark in decades.

“This is an addiction problem,” he said, adding that restricting access to one drug often only boosts demand for another.

A discussion panel toward the end of the afternoon drew several of the speakers together with representatives from the Blount County Sheriff’s drug task force, the Community Justice Initiative and the Substance Abuse Prevention Action Team (SAPAT).

McCoy afterwards said the event was “overwhelming” in its success.

And just as she took cues from Knoxville, others soon might draw inspiration from her.

One attendant approached her at the event and said, “We’d like to do this in Morgan County.”