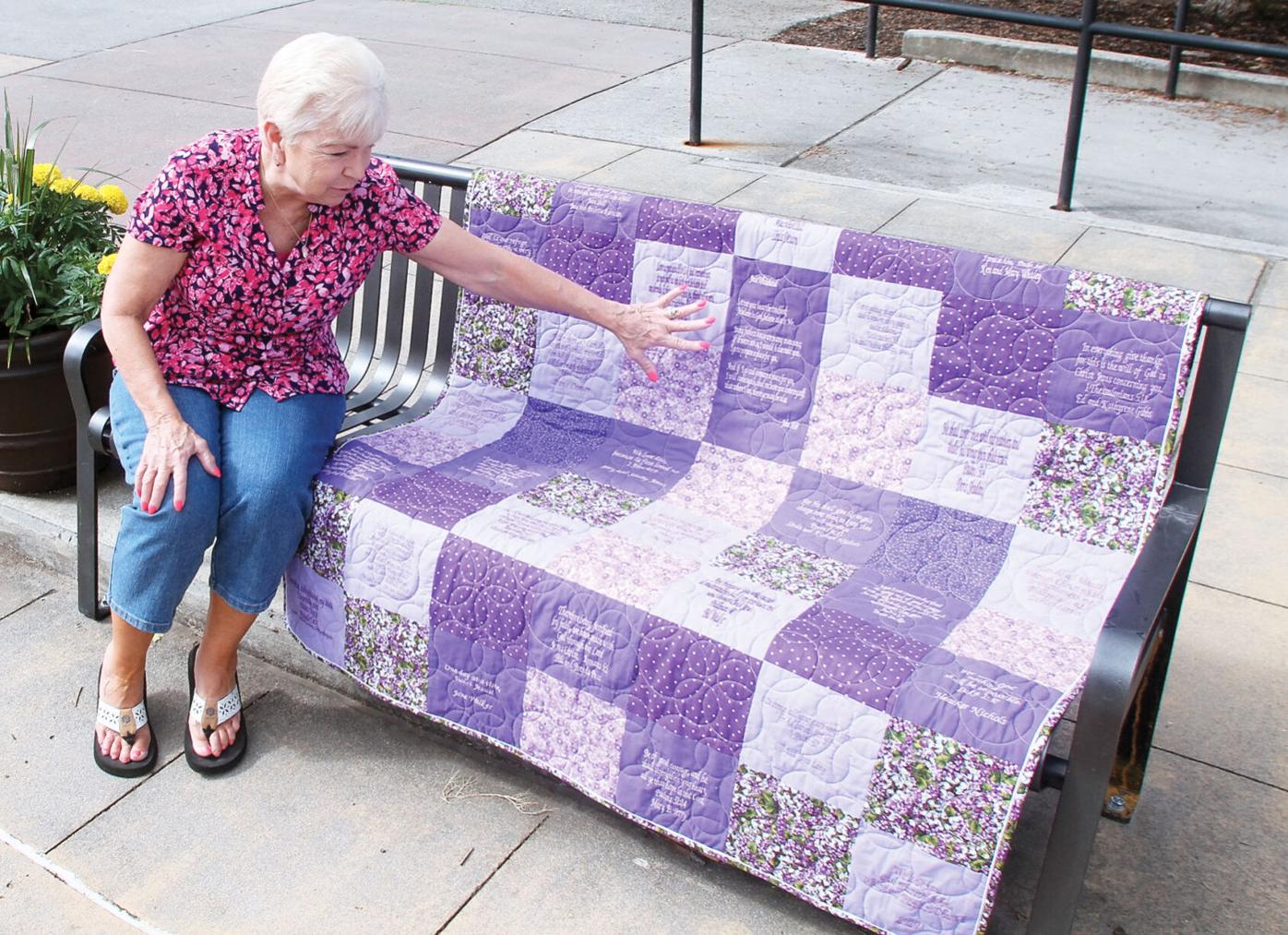 Janie Whitehead points to the many Bible verses on the quilt made for her by members of Hillview Baptist Church, where her husband, John is pastor. 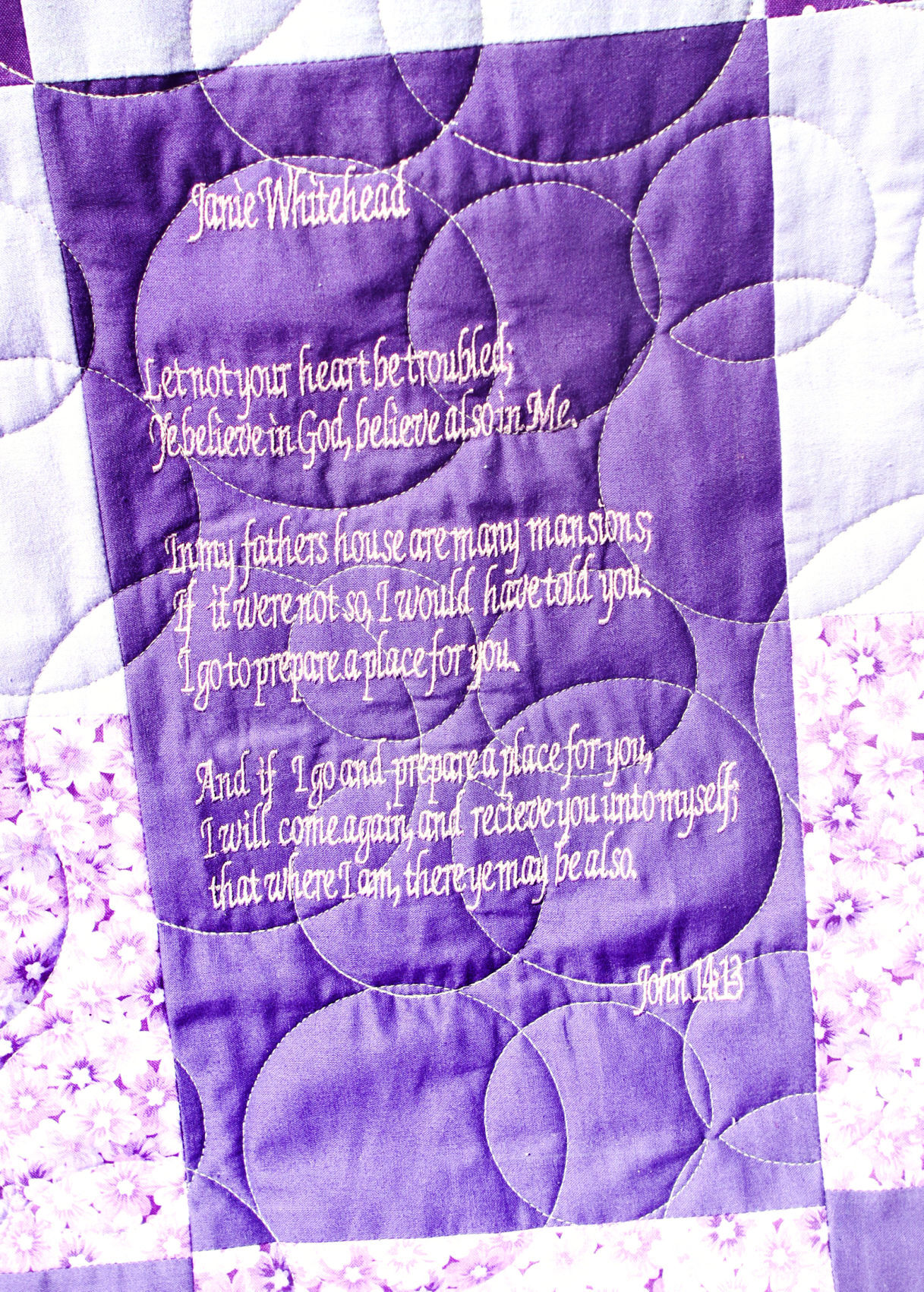 Bible verses fill the quilt made for Janie Whitehead. This patch contains John 14:13. She will take the quilt with her as she undergoes treatment for multiple myeloma later in the month. 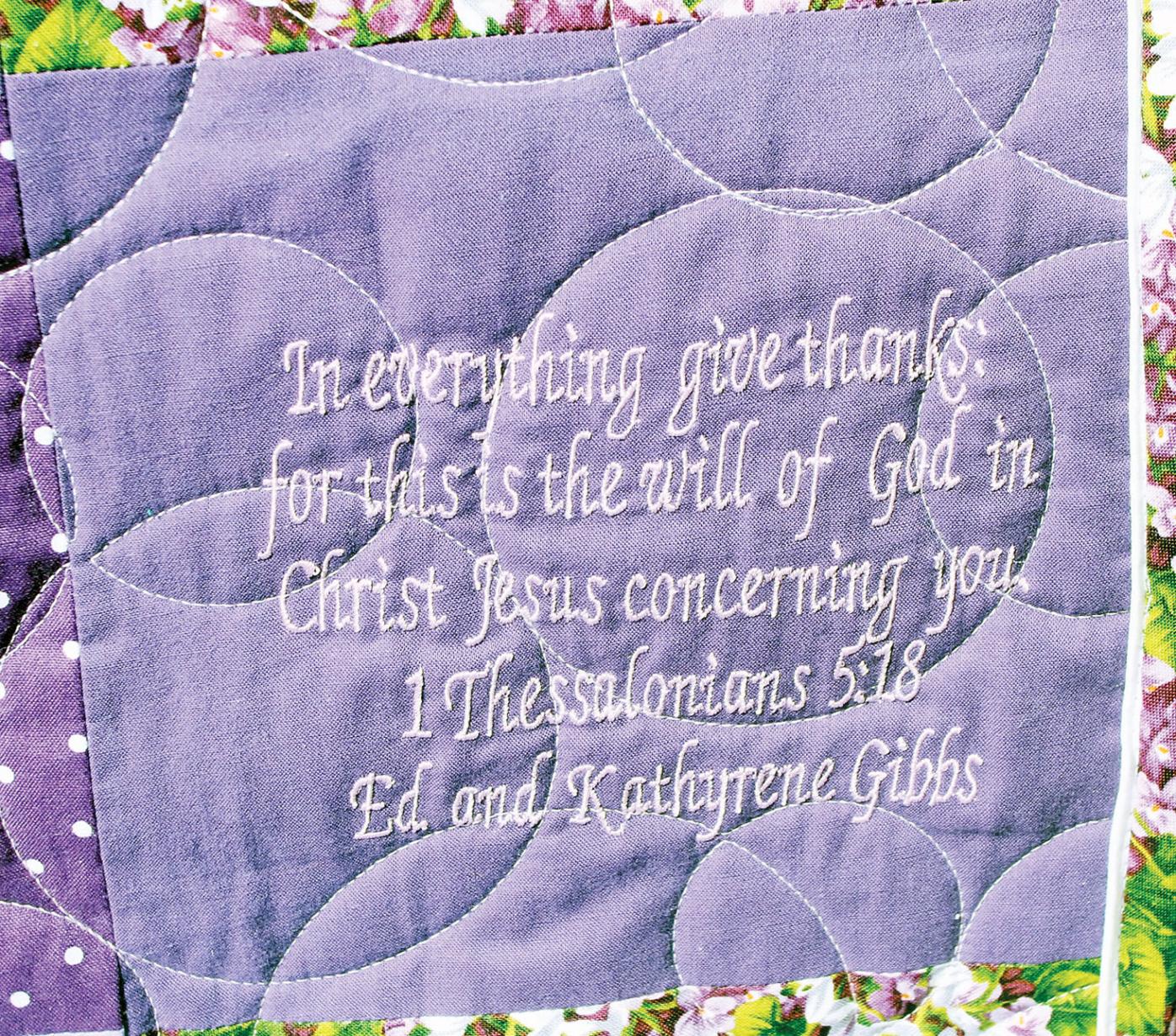 Bible verses fill the quilt made for Janie Whitehead. Her faith is what has helped this cancer patient through the tough times. 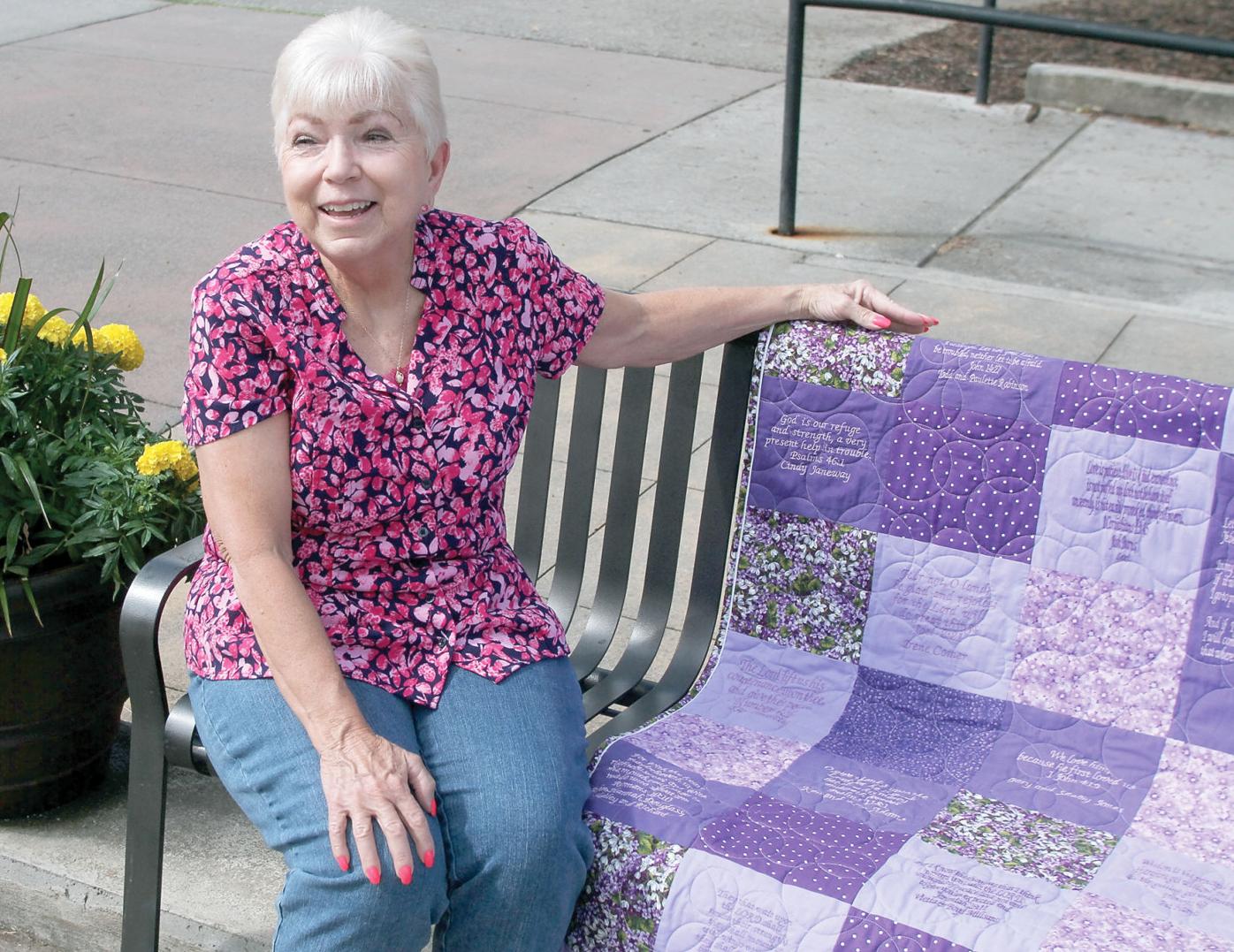 Janie Whitehead shows off a quilt the members of her church made for her. Her favorite color is purple, so the congregation made sure they used it in the quilt. 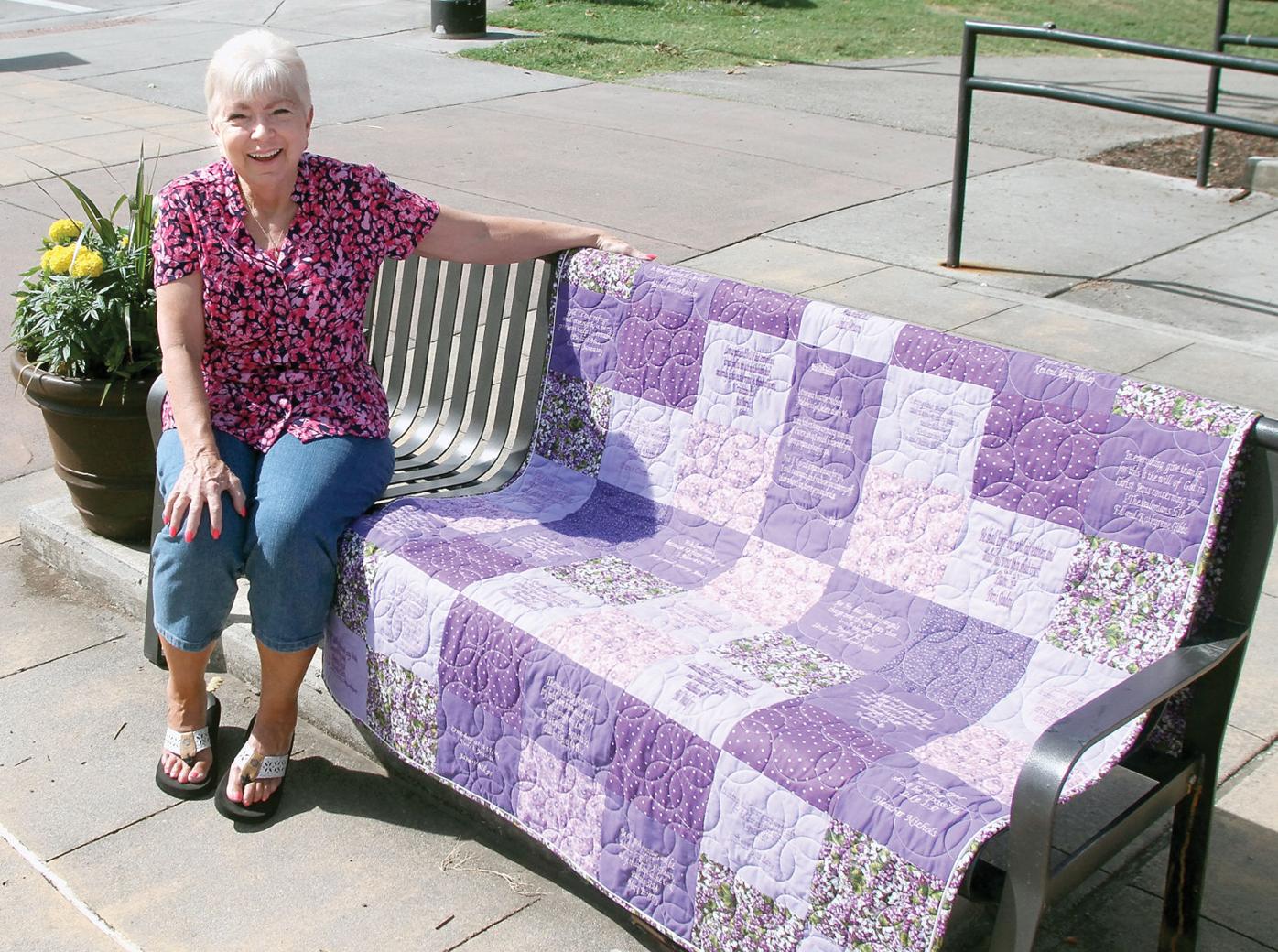 Janie Whitehead points to the many Bible verses on the quilt made for her by members of Hillview Baptist Church, where her husband, John is pastor.

Bible verses fill the quilt made for Janie Whitehead. This patch contains John 14:13. She will take the quilt with her as she undergoes treatment for multiple myeloma later in the month.

Bible verses fill the quilt made for Janie Whitehead. Her faith is what has helped this cancer patient through the tough times.

Janie Whitehead shows off a quilt the members of her church made for her. Her favorite color is purple, so the congregation made sure they used it in the quilt.

The answer to the question of what summer 2021 has in store will be much different for Janie Whitehead than any year she’s experienced.

That’s because this pastor’s wife, mother of two and grandmother to four is set for a stem cell transplant in coming days. Whitehead will leave her Blount County home Wednesday, July 21, for the preparation and procedure that will hopefully rid her body of the blood cancer that has taken over.

The diagnosis of multiple myeloma came almost a year ago, in August 2020. Whitehead said for months leading up to the diagnosis she had terrible stomach pains and bouts of diarrhea. Then there was the body pain.

“It got to the point that I couldn’t stand for water to even hit my body in the shower,” she said. “My shoulders, chest and back hurt constantly.”

She would learn that her blood had protein in it and eventually doctors performed a bone marrow biopsy; that’s when she learned what was causing her so much discomfort.

After discovering it was multiple myeloma, doctors developed a treatment plan that included shots in her stomach. A chemotherapy pill became part of the treatment, too.

She did those up through February and went into remission, Whitehead said. That positive news means that this cancer patient is now able to have a stem cell transplant, which will take place at Vanderbilt University Medical Center.

There are things Whitehead has been doing in preparation, like strengthening her body with long, daily walks. “They ran me through just about every test they could think of to make sure I will be able to withstand it,” she said.

An autologous stem cell transplant, which Whitehead said is her course of treatment, is the process of removing stem cells from her own body, cleaning them and then returning them to the body. Basically like running the cells through a washing machine, she explained.

The “cleaned” stem cells then are placed back inside the body, but some are instead frozen in case they are needed later on. Whitehead also will have to take chemotherapy drugs again before the stem cells are returned to her body to kill any cancer cells that could remain.

Seven to 10 days is the expected length of her hospital stay, but Whitehead will have to live near the hospital for weeks so she can be checked daily for progress or any complications.

Her husband, John Whitehead, has been pastor of Hillview Baptist Church for seven years. She said she couldn’t have endured through all of this without the congregation’s support and prayers.

Hillview even began fundraising for the couple weeks ago. Janie and John will have to stay in Nashville for weeks after the transplant, and that means expenses related to their stay. The church, she said, has raised enough for them to be in Nashville for three months.

The ladies of Hillview came together and made Whitehead a quilt in her favorite color, purple. The most special thing about the gift are the individual squares each person made, with Bible verses on them. Whitehead even contributed her favorites, one of them being John 14:13.

This project was orchestrated by church member Kathyrene Gibbs. Each contributor paid $10 toward the completion of the quilt. They presented it to her back in June 2020 or shortly thereafter, before she even knew she had cancer.

Whitehead said she missed a lot of church services back them because the pain was too much to bear for long periods.

“When I finally got on my treatments, it was a miracle,” she said.

A cancer diagnosis is tough to handle, this patient said, but her doctor has also reassured her beating it is possible.

“He said ‘this is a very treatable cancer,’” Whitehead said. “’It will take some time to get to where you need to be.’ I saw him yesterday and he said I have come a long ways since last year when he first saw me.”

Despite all she’s been through, Whitehead said she doesn’t have to look very far to see that others are suffering more. “I thank the Lord I can get out and walk, I can do my housework and I can do my gardening, pretty much what I want do do.”

Pastor Whitehead has found pastor friends who will fill in for him at Hillview while he is with his wife. “He’s been telling everyone he has an all-star cast,” Janie Whitehead said.

It is her faith that Whitehead said she relies on; that and the kindness of family, friends and those she’s never met who offer up their prayers. She will take the quilt given to her by the women of Hillview Baptist to the hospital with her in Nashville. It will be a reminder of the warmth of many hugs from each of them, she said.

And when she returns home, that quilt will be hung on the wall permanently.

Those wishing to contribute financially to the expenses related to Janie Whitehead's stem cell transplant can mail donations to Hillview Baptist Church c/o Edward Gibbs, 2124 Mentor Road, Louisville, TN 37777. She will likely have to stay in Nashville through early September.