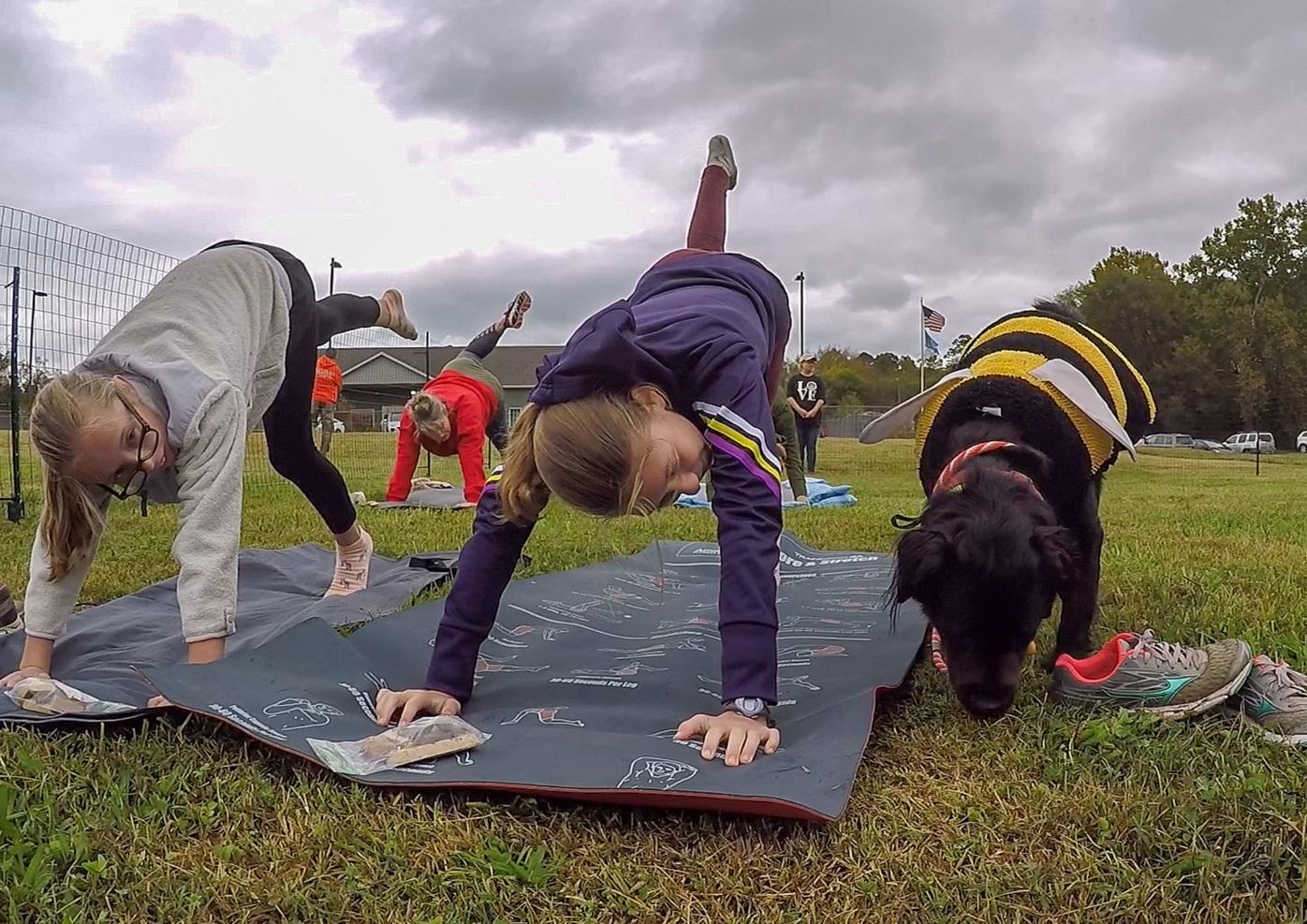 Grace Franklin (left) and Gretchen Smith attempt to focus on their yoga pose while a flat-coated retriever arrives in search of a treat. 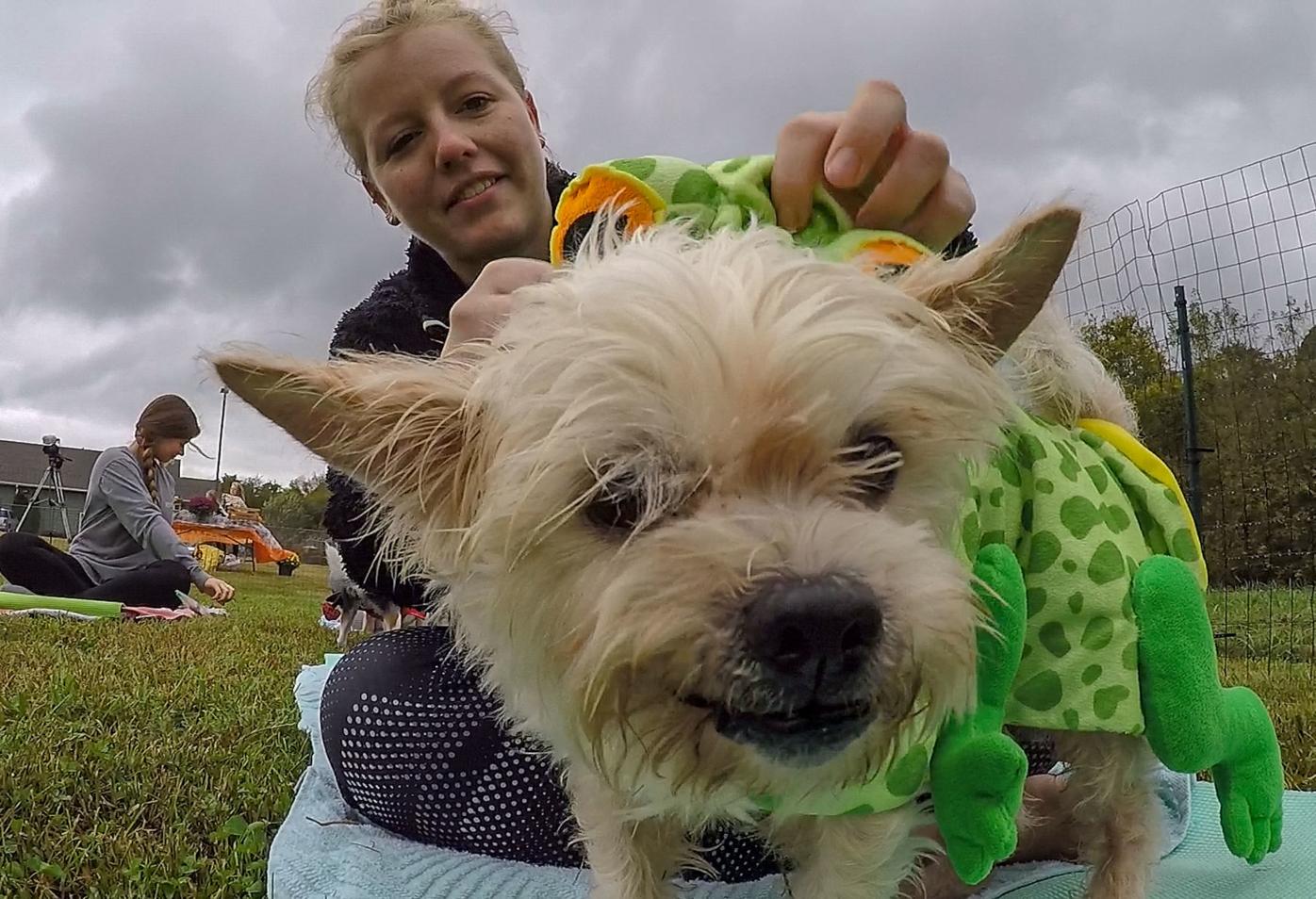 Cierra Walker pets a small dog dressed in a frog costumer for Halloween during the Puppy Yoga class Saturday morning. 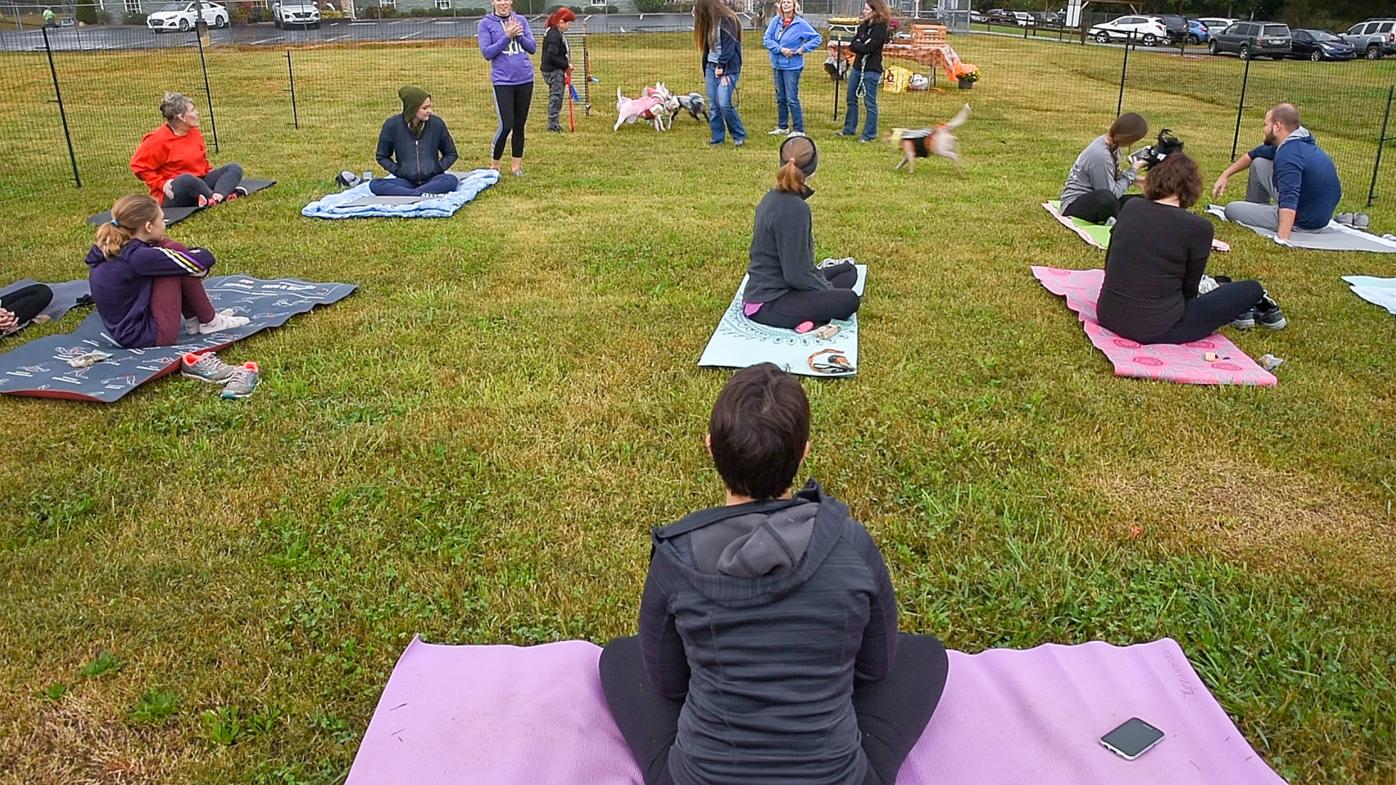 Grace Franklin (left) and Gretchen Smith attempt to focus on their yoga pose while a flat-coated retriever arrives in search of a treat.

Cierra Walker pets a small dog dressed in a frog costumer for Halloween during the Puppy Yoga class Saturday morning.

When you see the announcement for puppy yoga classes, you might be forgiven for envisioning a bunch of dogs wearing Spandex while taking various poses on rubber mats.

But don’t laugh: This is real, and the Blount County Animal Center volunteers have raised almost $1,000 for the Smoky Mountain Animal Care Foundation this year by hosting puppy yoga classes on Saturdays.

“So contrary to what that might sound like,” said Marie Beck, a yoga instructor at the Maryville Yoga Center and volunteer instructor, “I’m actually teaching yoga to humans while puppies run around and play and make us laugh.”

The idea was born when BCAC volunteer Tracy Longhurst saw other animal yoga programs across the country, and she wanted to help raise money and awareness for the dogs receiving care at the no-kill shelter, where more than 80 dogs are currently waiting to be adopted.

“We started puppy yoga back in June,” Longhurst explained. “It was a two-fold idea. We wanted to have a fundraiser for the shelter and also an event that would bring people to the shelter.”

Ideally, Longhurst said, more people would have a chance to get to know the dogs and adopt them.

Both ideas turned out to be successful.

Tara Phillips, for example, was invited to yoga and ended up taking home a young pit bull named Barnaby.

“I rode my motorcycle over here (to BCAC) and had no intention of taking a dog home with me that day,” she said with a laugh. Before the yoga session had ended, Phillips already knew she was going to adopt Barnaby.

“We didn’t take him home initially that Saturday,” she said, explaining that her two female dogs needed to have a chance to meet Barnaby first.

“I had to bring the girls up here to introduce everybody and make sure everything was going to be okay,” Phillips said. “The girls fell in love with him at first sight and they chased each other around and had a bit of fun out in the play area here.”

That was all part of Longhurst’s plan.

“A lot of times if you see a dog playing with other dogs and being social with people, that makes the dog more adoptable,” Longhurst explained. “Unless you take them outside, it’s hard to get an idea of how well behaved they are, if they know tricks and can sit for treats and things like that. (Participants) can see how sweet they are and how much attention they need.”

To achieve that goal, however, volunteers actually have to do a lot of work. For starters, they construct a 250-square-foot pen in the field across from the center where yoga participants can do yoga and play with dogs. But before the yoga class even begins, the volunteers identify which dogs will be best suited for the program and test them for two weeks before the class to make sure the dogs will get along with each other. And then the volunteers make doggy snack bags filled with treats that each participant can share with the dogs during the session.

During each hourlong class, 10-15 dogs are introduced to the participants, beginning with the small dogs. After the small dogs have had their chance to play, the volunteers return them to the kennels and bring out the larger dogs.

A volunteer also takes photographs of the session and turns them into a video slideshow that is shared on the center’s Facebook page.

“My favorite experience from doing puppy yoga has just been watching the dogs have so much fun,” Beck said before the yoga class began. “When I first started, I thought it was just a way to get them adopted and to raise money. It’s absolutely that, but watching those dogs get to have a whole hour of play time away from their kennels is just so fun to watch.”

Even though Saturday’s final puppy yoga event was held in dreary weather, Longhurst pointed out they still were able to get a dozen people to participate. That begs the question: Will puppy yoga return in the spring?

“I’ve already had people ask me if we’re going to come back in the spring,” she answered. “We haven’t had a lot of adoptions from this, but I think a lot more people know what we do here because of yoga.”

Beck and Longhurst give each other knowing glances after the question is asked. They laugh and Longhurst admitted she’s already planning for the spring return of the puppy yoga program.