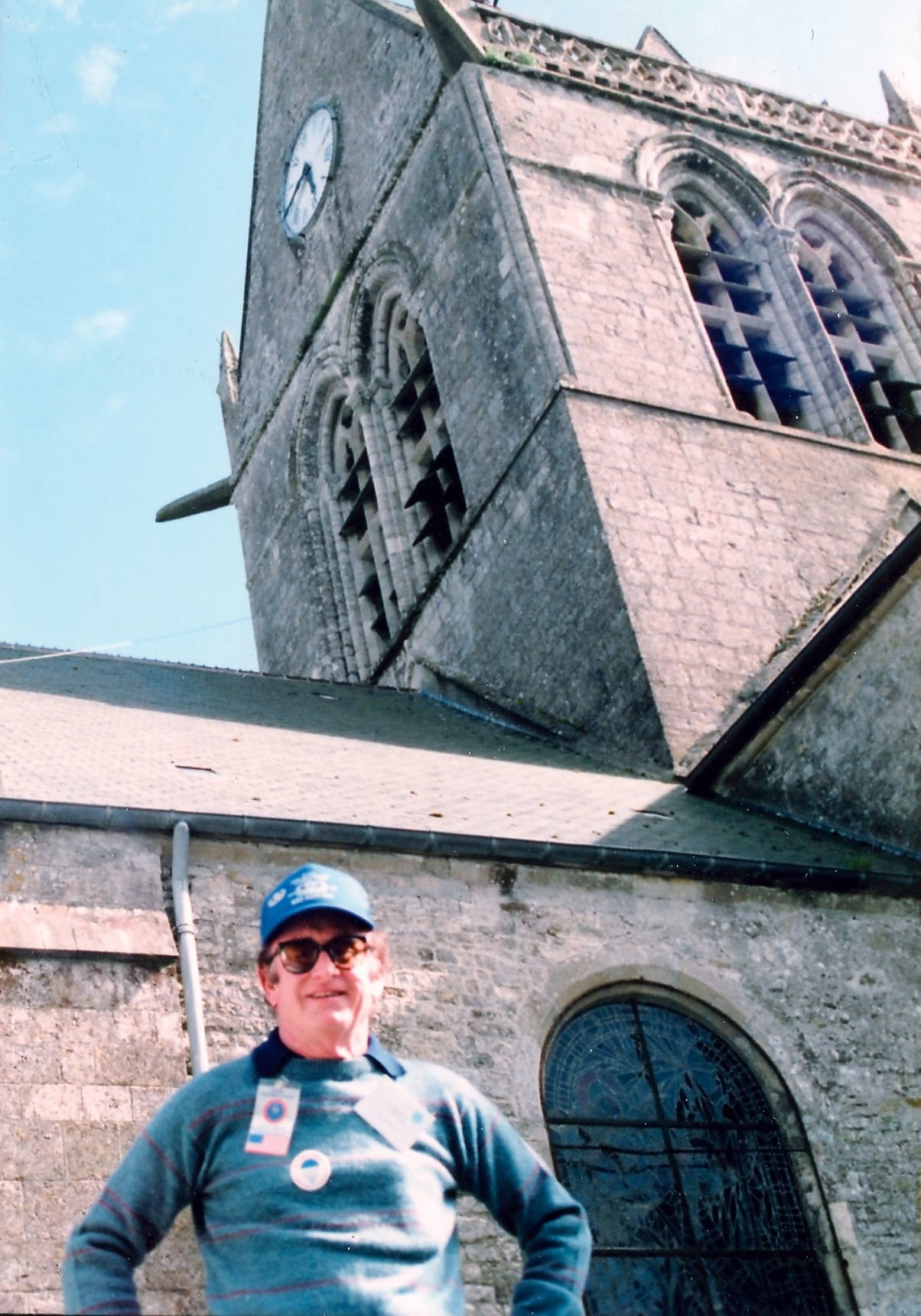 Ken Russell stands in front of the 500-year-old church he landed on as a paratrooper on June 6, 1944, during the D-Day invasion. 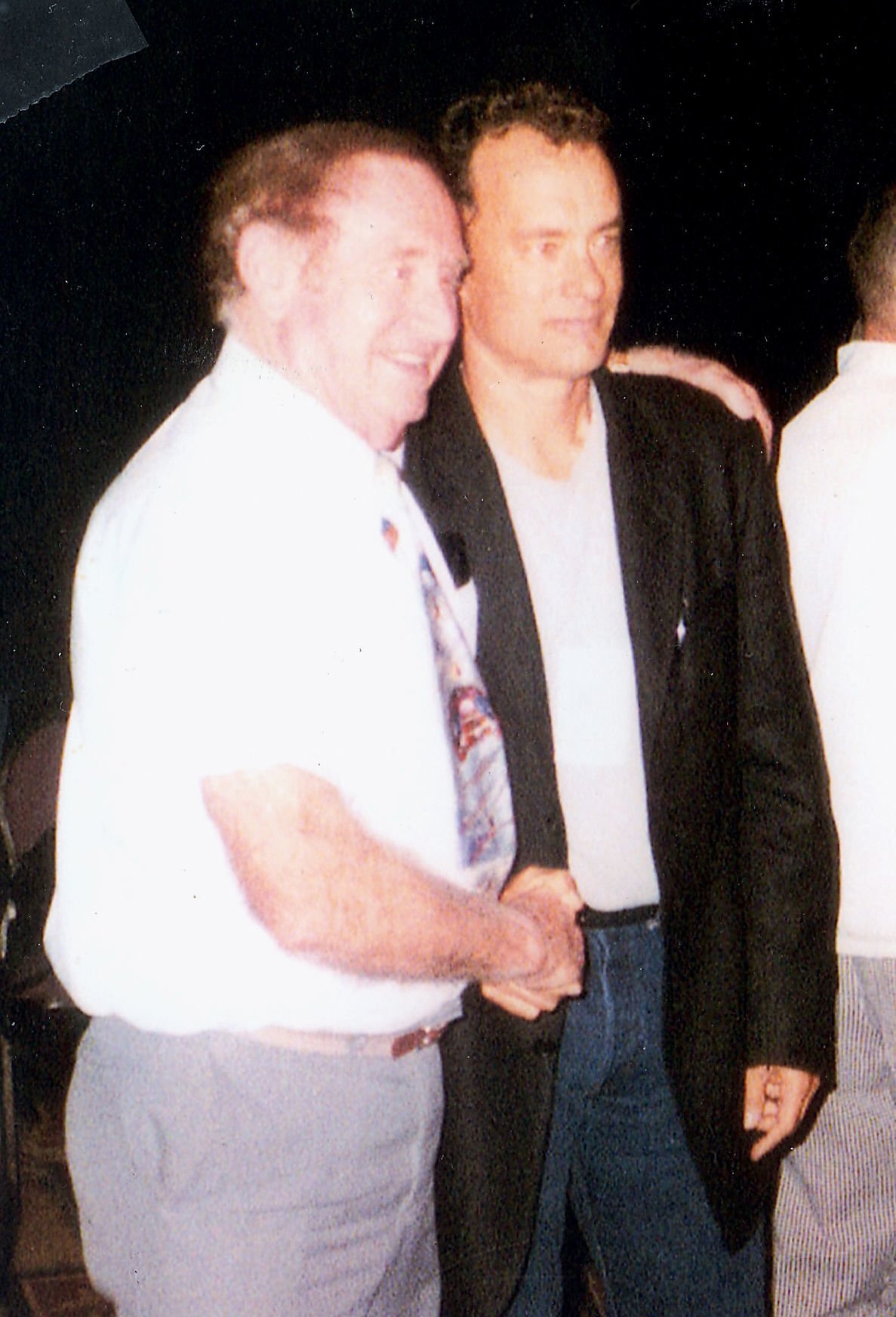 Ken Russell is seen with Tom Hanks in 1997 at the National WWII Museum in New Orleans. 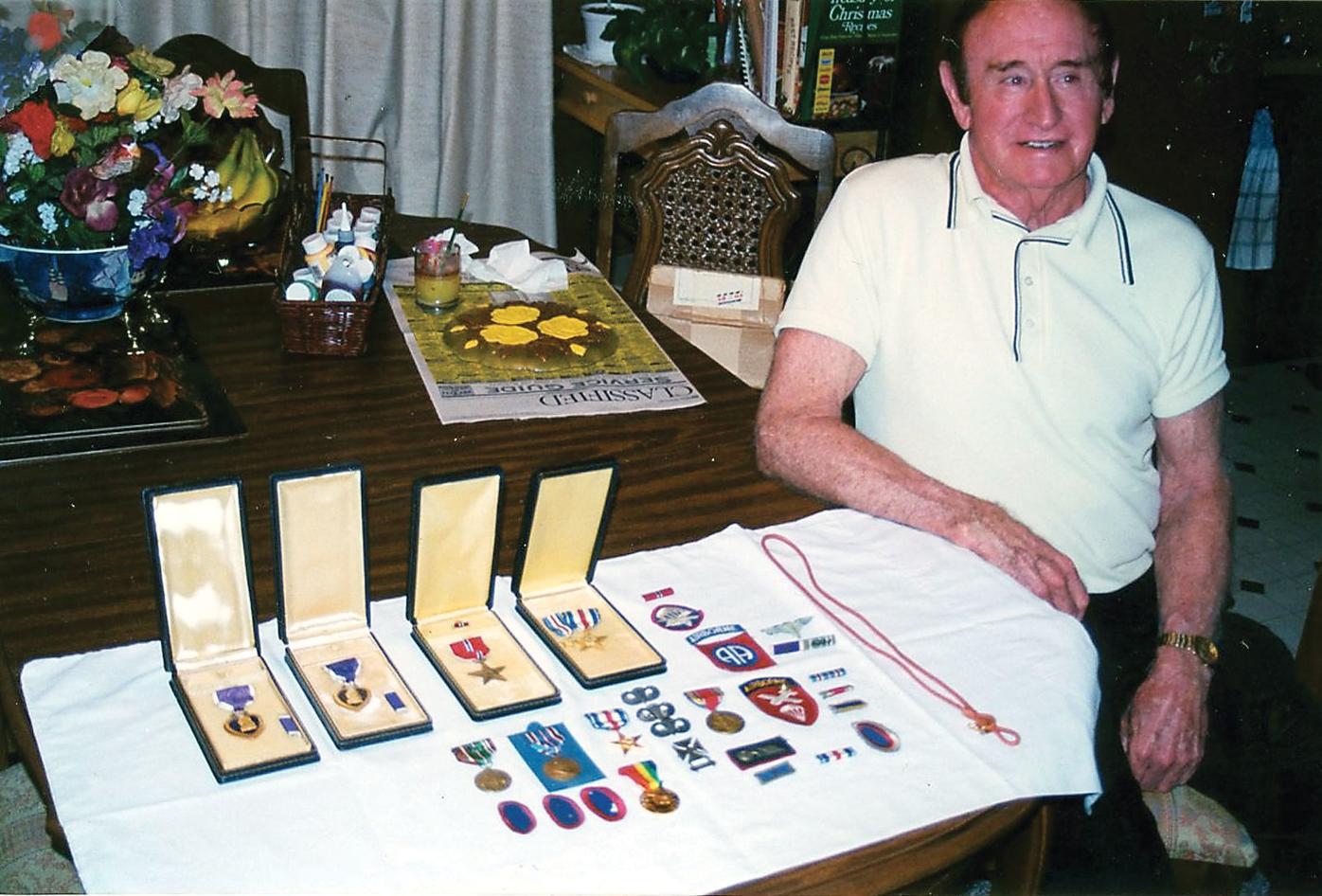 Ken Russell is seen with his World War II metals and awards at his home in 2002.

Ken Russell stands in front of the 500-year-old church he landed on as a paratrooper on June 6, 1944, during the D-Day invasion.

Ken Russell is seen with Tom Hanks in 1997 at the National WWII Museum in New Orleans.

Ken Russell is seen with his World War II metals and awards at his home in 2002.

Blount County has a special connection to the D-Day invasion on the shores of France on June 6, 1944.

The late Kenneth Russell, who died in 2004 on D-Day’s 60th anniversary, earned two Purple Hearts, two Silver Stars and two Bronze Stars after parachuting and landing on the roof of church on D-Day.

Andy Tipton, a senior at Maryville High School in 2002, interviewed Russell for his Veteran’s Assembly Project class. The following are some excerpts from the interview:

Russell, who grew up on a farm in Polk County, dropped out of school and joined the Army in 1943, at the age of 17. He was sent to basic training in California, and then to advanced paratrooper training at Camp Rucker in Alabama.

Pvt. Russell was assigned to the 82nd Airborne, 2nd Battalion, 505th Parachute Infantry, Company F, and shipped out to England for preparation for the D-Day invasion.

At 1 p.m. on June 6, myself and the other members of F Company climbed into the C-47 Dakota Air Transport aircraft with 65 pounds of equipment on each of us.

The pilots were afraid. For most of the pilots of Troop Carrier Command this was their first combat mission. They had not been trained for night flying, or for flak and bad weather. Their C-47s were designed to carry cargo or passengers. They were neither armed or armored. Their gas tanks were neither protected nor self-sealing.

The possibility of a midair collision was on every pilot’s mind. The pilots were part of a gigantic air armada: It took 432 C-47s to carry the 101st Airborne to Normandy, about the same number for the 82nd. They were flying in a V-of-Vs formation, stretched out across the sky, 300 miles long, nine planes wide, without radio communication.

They crossed the English Channel at 500 feet or less to escape German radar detection, then climbed to 1,500 feet to escape anti-aircraft batteries on the Channel Islands. As they approached the Cotentin coast, they descended to 600 feet or so, the designated jump altitude (designed to reduce the time the trooper was helplessly descending).

When they crossed the coastline, they hit the cloud bank and lost their visibility altogether. The pilots instinctively separated, some descending, some rising, all peeling off to the right or left to avoid midair collision. When they emerged from the clouds, within seconds or at the most minutes, they were hopelessly separated.

Simultaneously, to use the words of many of the pilots, “all hell broke loose.” Searchlight, tracers and explosions filled the sky. “It seemed almost impossible to fly through that wall of fire without getting shot down, but I had no choice. There was no turning back.”

They could speed up, which most of them did. They were supposed to throttle back to 90 miles per hour or less, to reduce the opening shock for the paratroopers, but 90 miles per hour at 600 feet made easy targets for the Germans on the ground, so they pushed the throttle forward and sped up to 150 miles per hour, meanwhile either descending to 300 feet or climbing to 2,000 feet or more. They twisted and turned, spilling their passengers and cargo. They got hit by machine-gun fire, 20 mm shells and the heavier 88 mm shells. They saw planes going down down to their right and left, above and below them. They saw planes explode. They had no idea where they were, except that they were over the Cotentin.

In Ste.-Mère-Église, the fire was raging out of control. The men of the 506th who had landed in and near the town had scattered. At 0145, the second platoon of F Company, 505th, had the bad luck to jump right over the town, where the German garrison was fully alerted.

Russell was in that stick. “Coming down,” he recalled, “I looked to my right and I saw this guy, and instantaneously he was blown away. There was just an empty parachute coming down.” Evidently, a shell had hit his Gammon grenades, Russell said.

Horrified, Russell looked to his left. He saw another member of his stick, Pvt. Charles Blankenship, being drawn into the fire (the fire was sucking in oxygen and drawing the parachutists toward it). “I heard him scream once, then again before he hit the fire and then he didn’t scream anymore.”

The Germans filled the sky with tracers. Russell was trying “to hide behind my reserve chute because we were all sitting ducks.” He got hit in the hand. He saw Lt. Harold Cadish and Pvts. H.T. Bryant and Ladislaw Tlapa land on telephone poles around the church square. The Germans shot them before they could cut themselves loose. “It was like they were crucified there.”

Pvt. Penrose Shearer landed in a tree opposite the church and was killed while hanging there. Pvt. John Blanchard, also hung up in a tree, managed to get his trench knife out and cut his risers. In the process he cut one of his fingers off “and didn’t even know it until later.”

Russell jerked on his risers to avoid the fire and came down on the slate roof of the church. “I hit and a couple of my suspension lines went around the church steeple and I slid off the roof.” He was hanging off the edge. “And Steele, (Pvt.) John Steele, whom you’ve heard about (in the book and movie, “The Longest Day”), he came down and his chute covered the steeple.” Steele was hit in the foot.

Sgt. John Ray landed in the church square, just past Russell and Steele. A German soldier came around the corner. “I’ll never forget him,” Russell related. “He was red-haired, and as he came around he shot Sgt. Ray in the stomach.” Then he turned toward Russell and Steele and brought his machine pistol up to shoot them. “And Sgt. Ray, while he was dying in agony, he got his .45 out and he shot the German soldier in the back of the head and killed him.”

Through all this, the church bell was constantly ringing. Russell could not remember hearing the bell. Steele, who was hanging right outside the belfry, was deaf for some weeks thereafter because of it. (He was hauled in by a German observer in the belfry and made prisoner, but escaped a few days later.)

Russell, “scared to death,” managed to reach his trench knife and cut himself loose. He fell to the ground and “dashed across the street and the machine gun fire was knocking up pieces of earth all around me, and I ran over into a grove of trees on the edge of town and I was the loneliest man in the world. Strange country, and just a boy, I should have been graduating from high school rather than in a strange country.”

Russell was discharged in 1946 and married his high school sweetheart, Dorothy, in February on 1947 and later moved to Louisville, where he worked for the U.S. Postal Service until his retirement.

Russell was invited by the mayor of Ste.-Mère-Église, France, to be the guest of honor at the 50th anniversary of D-Day on June 6, 1994. A special luncheon was held in Ste.-Mère-Église, and Russell was awarded the Medallion du Jubile (1944), Normandy, France, in recognition of his participation in the D-Day invasion and liberation of France. A delegation of members from the Blount County Chamber of Commerce accompanied him to France.

Russell was still a resident of Louisville preparing to attend the 60th anniversary of D-Day on June 6, 2004, when he became ill in early May and was hospitalized with severe pneumonia, and had to cancel him trip. He died on June 6, 2004. He was interred with military honors in Magnolia Cemetery in Maryville.